The Whip is a highly trained acrobat, martial artist and athlete. She can pull off some heroic stunts.

She apparently inherited her grandfather’s gift with the whip, and uses it both as a weapon and as an aid for her death-defying urban acrobatics.

Shelly Gaynor is the granddaughter of the Whip (Rod Gaynor). Rod was a member of the All-Star Squadron and a compadre of the first Vigilante (Greg Sanders).

A journalist and devotee of the martial arts and extreme sports, she wrote best-selling book “Body Thunder: how I turned my body into a living weapon to beat the 21st century blues. It chronicled her remarkable lifestyle and athletic accomplishments.

Shelly then discovered the hidden past of her grandfather. Now she knew how to reach the next level of excitement and glory she was yearning for. She would revive the “Whip” identity and become a urban vigilante. Shelly had always been fascinated by super-heroes. And now she had the spark to light that fire – and become one.

The new Whip operated for some time as an ambiguous crime-fighter with a thirst for adrenaline. Eventually, she sought to experience the lives of more high-profile heroes. That meant networking, so she answered a classified by the now-aged Vigilante (Greg Sanders). He was assembling a posse to hunt a monster.

Gaynor didn’t luck out. All the Vigilante could assemble was a bargain-basement crew of nobodies. The Whip was probably the most competent and charismatic of the lot, which wasn’t what she had been looking for. Nevertheless she took extensive notes for her next book, a tell-all piece about her life as the Whip. 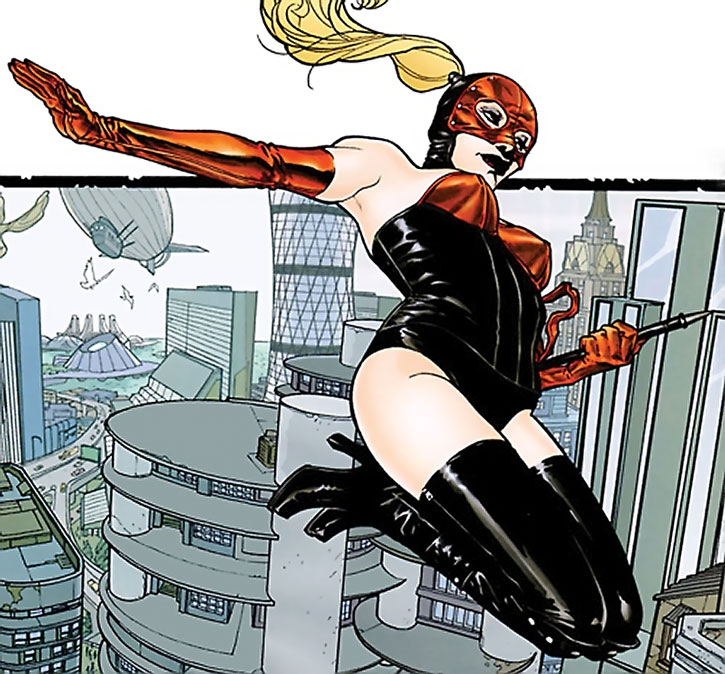 One of the recruits of the Vigilante was the killer I, Spyder. He had an over-the-top demeanour and look as a stone-cold assassin with an animal totem, dark sunglasses and poison arrows. Shelly found this straight-to-DVD-action-movie style exciting. she flirted with I, Spyder until he agreed to have sex.

Though she never knew it, this was the closest Shelly Gaynor came to touching cosmic destiny. Her one-night-stand was on the team due to manipulations from mysterious and unreal entities, the Seven Unknown Men.

The last day of summer

With I, Spyder’s help the rag-tag team found and attacked the monster that the Vigilante was gunning for. It was a house-sized spider (not that one).

Though the encounter was minor by super-heroic standards, Shelly was elated. Working with other costumed heroes against an impossible creature had been incredibly scary, exciting and rich experience for the Whip. She felt that she had caressed a sliver of what it was to be a real super-heroine.

Tragically, this hunt was doomed to disaster. The spider was bait to destroy the Vigilante’s D-list posse. That was to make sure they would never fulfil a prophecy. It had taken Gaynor, Sanders and the others far enough into Miracle Mesa for them to be ambushed and slaughtered by massed Sheeda forces led by Neh-Buh-Loh.

The Whip and the Vigilante died together, impaled by Neh-Buh-Loh’s spear.

Shelly is an intense and determined person. She is fascinated by what a sufficiently driven individual can achieve, especially in a comic book world. She wants to be there and be with the best. She is hooked on the unique, powerful rush that comes with being a death-defying vigilante.

Even though she became a successful urban vigilante, Shelly yearned for the greater mythical heights of something like the JSA, to walk among the gods.

Gaynor is an excellent writer and a real charmer, with great wits and a pretty smile. She does not take herself seriously, aside from her fascination with what she calls the “super-cowboys”. She enjoys life and throws herself at it.

Shelly is in part driven by being constantly told by her mother she was not good enough and not successful enough, and is a classic overachiever. She’s *so* set on constantly proving just how extraordinary and cool and smart and funny and popular she is. Yet somehow, it ends up making her attaching rather than annoying.

(Writing) “In the world of the super-cowboys, there’s always blood. Someone’s blood. On someone’s hands. There are always special destinies. Tales of loss and vengeance. Family obligations. Blood. Spilled or otherwise.”

(Writing) “I’ve taken this whole morally ambiguous urban vigilante thing as far as I can. And now, God help me, now I want to visit other planets and dimensions  and fight rogue gods. In my deepest, darkest moments at 3 a.m., I imagine dying to save the universe. I picture the face of the moon, carved into a memorial likeness. Entire bereaved worlds weeping at my grave. Maybe then my mother will take my life seriously.”

(Writing) “And one by one, we fall effortlessly into our roles. Our ’secret identities’ are forgotten. And God help me, is that what *real* super-heroes feel ? Is this it ? This dreamy piling up of weirdness and the impossible. I am chasing a legend. I’m all wrapped up in prophecy and myth. My apartment and my fears about money and the future and never being good enough… compared to *this*, everything seems so fucking stupid and unreal.”

Drawbacks:
MIA toward Adrenaline, Public ID, Partial Attack Vulnerability (-1CS RV vs. attacks and interactions accusing her of not being good enough).

Equipment:
Metallic Whip [BODY 04, EV 03, Stretching: 02, Limitation : Stretching allows no fine manipulation (-2)]. The whip retracts silently in the handle at the touch of a button. 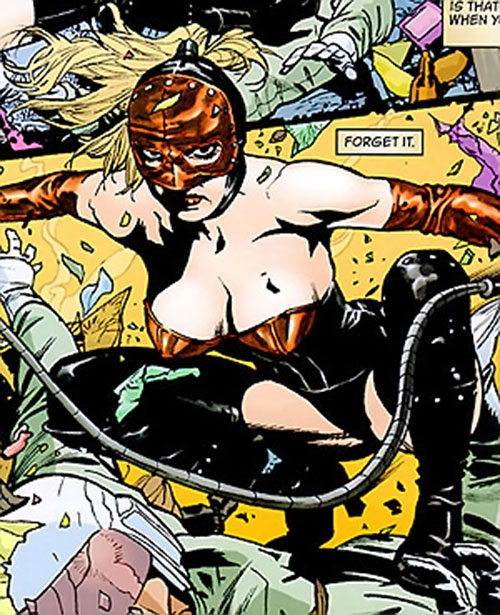 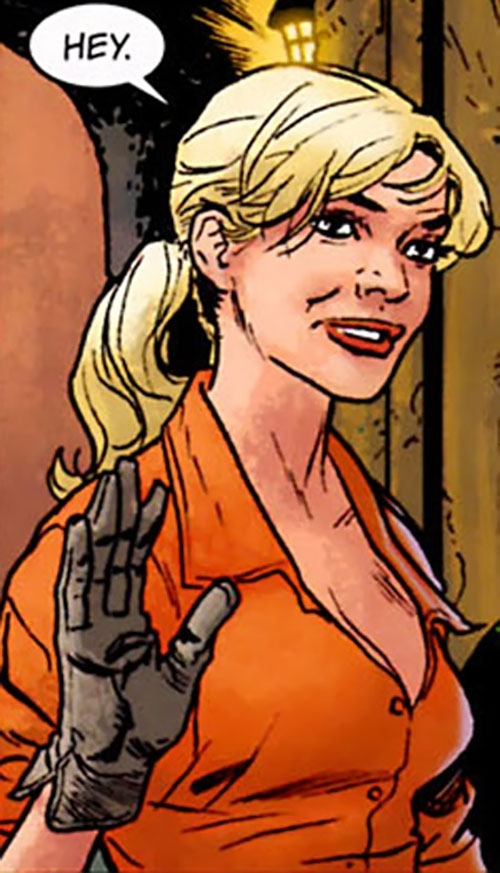