Very little is known about her, though that generic quality can become useful if you need a stock cinematic  fighter.

As her namesake implies her fighting style is all about her whip. She uses extra reach her weapon grants to keep foes at bay and occasionally ensnare and punish them. These are all pretty standard tactics for a whip fighter. Her most devastating attack with her whip is where she starts snapping it around her in rapid succession, usually landing multiple hits.

In more open areas she also latches on to objects in the setting. Then she can either swing across the screen Tarzan style or latch on something above her and swing up and drop down in a different area for added mobility. Her reach and mobility are her main assets, so she must fight strategically.

She is also able to stretch her arms out to further enhance her range with a whip. She seldom uses this technique, and it is usually reserved as a surprise attack.

Her whip also has a combat knife on the end of the hilt. She also uses a Desert Eagle and some hidden explosives beads as extra weapons.

Her official bio states that she proficient in whip fighting and Heidern’s assassination techniques.

A video showing the moveset and combos of Whip in the 2005 KoF video game.

(Whip being a filler character with next to no storyline, the following is mostly cobbled together from other characters’ storylines. Which means that it involves a fair bit of guesswork.)

Whip was originally the older sister of K’. She was killed when the NEST Cartel abducted K’ to genetically infuse him with Kyo Kusanagi‘s flame wielding abilities. She apparently died in his arms before he was abducted, telling her younger brother to stay strong until they met again.

She was later brought back as a clone by the NEST Cartel. This most likely was an attempt to manipulate him emotionally. While being combat trained by NEST she befriended Krizalid. Seirah was under the assumption that he was her brother when in actuality he was only a clone.

Krizalid did have some of K’s memories, which had transferred into his brain. So he did believe himself to be her brother.

Prior to the events of KoF ’99, Whip infiltrated Heidern’s military unit. Most likely, she was to act as a spy – as the group was hunting down NEST.

Her team investigated the ruins of the NEST base after the conclusion of the tournament in ’99. They found Krizalid, who had been crushed by a rock. The disoriented Krizalid died while admitting that he had no idea whom he actually was. 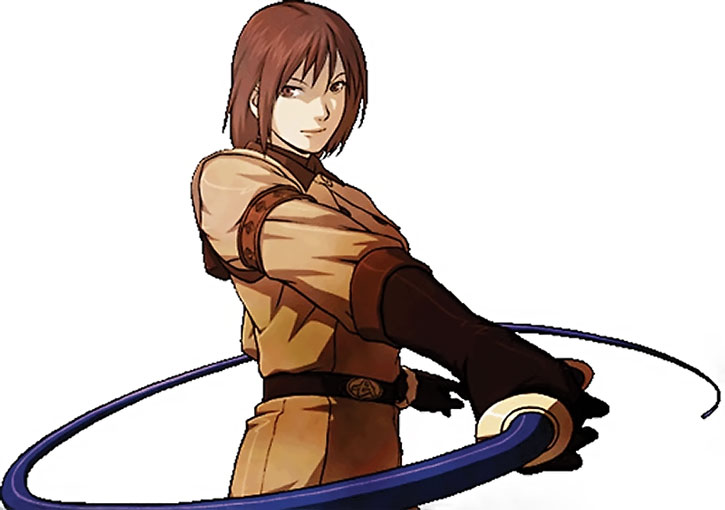 It is likely that this caused her to doubt her employer’s motives. Thus, she started investigating them on her own time. During the 2000 tournament, while in the field, she was separated from her team. She then interrogated several operatives and unearthed some disturbing information on the new leader of NEST.

Named Zero, this man was himself a clone of Krizalid – making him a clone of a clone of her brother. It is *possible* that had rigged a boulder to kill Krizalid (whom Whip still thought of as a brother), then manipulated the Ikari Warriors by impersonating Heidern’s friend Ling. If so, the goal was to lead them on a suicide mission.

Another likely conclusion is that Zero had hijacked NEST to use for his own selfish purpose of world domination.

Regardless, Whip joined her brother K’ in his quest to destroy NEST. K’ and his group defeated Zero at the end of the 2000 tournament. It is heavily implied that Whip then caught up to Zero and killed him with her Desert Eagle.

Whip is still a member of the Ikari Warriors. Thus, it is likely that her team never learned of her origin from NEST. She still appears in later games, but quite often as a support character. This would imply that she’s now just a reservist on the team.

Whip is a young woman with shoulder length brown hair who always wears her military uniform.

Whip’s stated to be basically an enigma. She doesn’t really talk much and her motives for most of her story are quite often never fully explained.

Her brother’s teammate and best friend Maxima once stated that she was pure of heart.

“Thanks for the good memories.”

Whip could be inserted as is. Alternatively, she could be a relative of the Whip (Shelly Gaynor).

A third possibility is that she’s a clone of Paul Kirk’s sister, or simply a gender-swapped clone of Kirk.

In the Marvel Universe she could be the same person as Coachwhip.

She previously had a Dark Secret (former NESTS operative) and had Mistrust after she left the Ikari Warriors.

Since she’s returned to her duties and this subplot has been completed said Drawbacks are assumed to have been bought off. 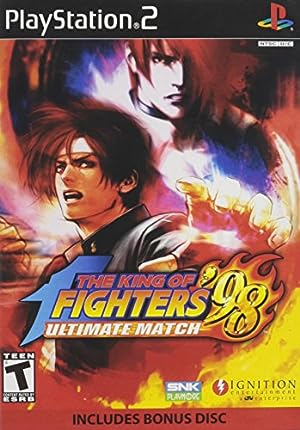 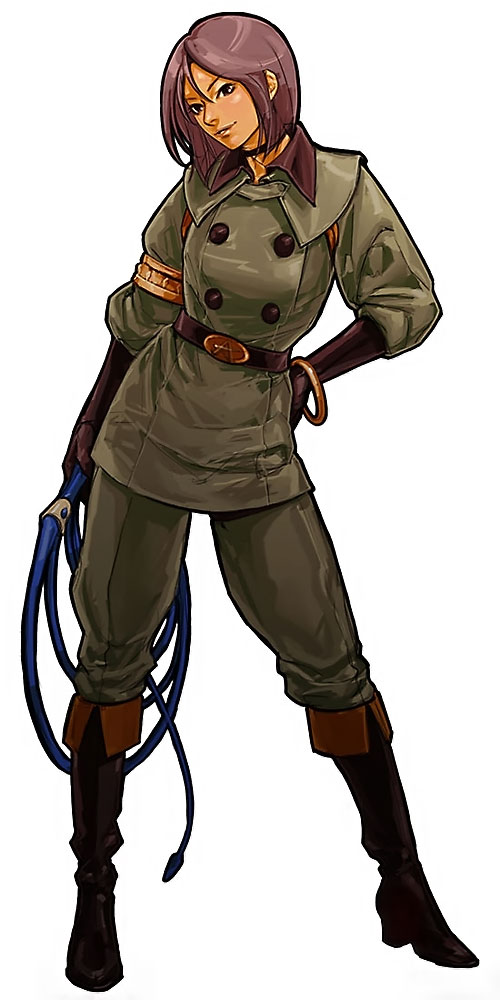