This first profile covers Scarlotti as Whiplash, from 1967 to 1979.

Mark Scott is a competent research engineer and a brilliant weapons designer. His personal tastes tend toward unusual arms based on ancient designs.

Aside from his considerable technical expertise, he’s a natural athlete with a gift for wielding flexible weapons. He taught himself to use a very dangerous, heavy whip and later trained with arms like bolas or nunchaku.

At first Whiplash was simply a competent whip-wielder. But he continued to train intensively until he could reliably cleave a fly in mid-flight at a dozen paces. This intensive regimen also built up his strength and endurance.

Whiplash likes to show off his accuracy and power. At this stage he will often burn Hero Points  to perform flashy strikes to weaken his opponent at the beginning of a fight.

Even in the earliest stages of its development, Whiplash’s steel-fibres whip could slash clean through solid steel at supersonic speeds. The crack and report of the whip are extremely loud and impressive, and will terrify most people.

After the floating casino incident, Scott used Stark Industries resources to build invisible force shields absorbing the energy of the attack that had defeated him – repulsor technology. This shield could even channel absorbed power from repulsor blasts to electrify his whip.

He later refined this by making his whip electrified without relying on power from Iron Man’s repulsors.

Back in 1968 Mark Scott was a brilliant and athletic young man. He was on the verge of having it all by the standards of his time – a prestigious and well-paying job, a beautiful wife, and a bright future. However, his greed and arrogance soon led him to lose it all. 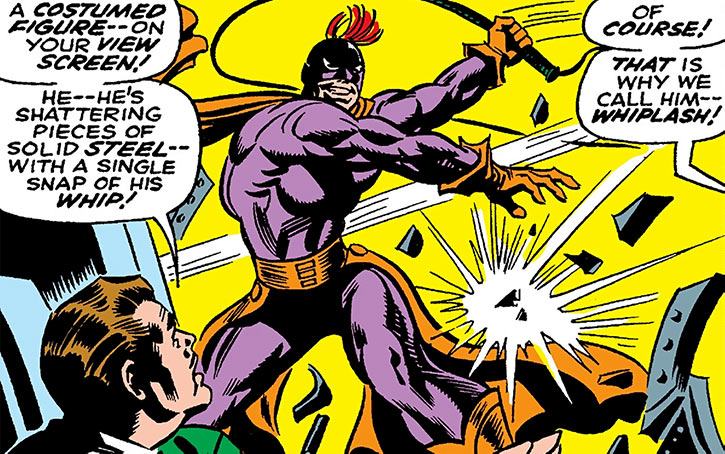 Wanting to rise in society even faster, Scott frequented dangerous, powerful people. Many of these friends belonged to one of the largest and most aggressive crime syndicates of the US – the Maggia. He specifically associated with the Nefaria family, who cultivated an interest in advanced weapons and technology.

Using his technical talents to serve the mob, the egotistical Scott designed an intimidating and deadly whip. He insisted to wield it himself as an enforcer – with a costume and a super-villain name. The leader of the Nefaria mob, Whitney Frost (aka Giulietta Nefaria, aka Big M) agreed. Perhaps she appreciated the commitment and discipline Scott demonstrated in training with his weapon.

Scott soon become one of the top enforcers for the Nefaria family. That was in part thanks to the vacuum created when the X-Men defeated Count Nefaria.

During this era, Scott was hired by Stark Industries. He joined the Cincinnati research lab, which was then chiefly working on a manned orbital lab. Scott then wooed the director, Vicky Snow – the first woman to ever head a research unit at Stark Industries.

Scott then enjoyed another lucky break as Iron Man was captured by the Maggia. The Golden Avenger broke free from his cell but found himself right within the headquarters where Whiplash was training – a submarine under a floating casino. Not only did it give Whiplash a chance to confront his employers’ greatest enemy, but Iron Man was greatly weakened, his transistorised strength practically exhausted.

Nevertheless, Iron Man dodged most of Whiplash‘ blows. He then confused Scott with an hologram projector. Although his armour was being shredded by the whip-wielding sadist, Iron Man overcame Whiplash with a desperate repulsor blast — only to collapse and be recaptured.

At this point, AIM troops invaded the Maggia floating casino. A recovered Whiplash engaged them along with other Maggia heavies. The casino ended up sinking, though Iron Man and Jasper Sitwell of S.H.I.E.L.D. evacuated all gamblers.

Narrowly escaping the sinking ship and the law, Scott resumed his career with Stark Industries. He also continued to improve his skills and weapons as Whiplash. When Stark came to visit the Cincinnati lab, the engineer seized both the opportunity to advance his career as Scott, and to have his revenge against Iron Man as Whiplash.

Things did not go well. Scott started boasting about his competence and manliness to impress the boss. His swagger about Snow going back to the kitchen and leaving him in charge of the lab when they married eventually resulted in Director Snow dumping him.

As to Whiplash’s attack on Iron Man, it started well as he wrecked the Golden Avenger’s gauntlets. However Iron Man disarmed Whiplash using magnetic disks. Scott was forced to flee after a maniacal attempt to kill Iron Man with his bare hands. 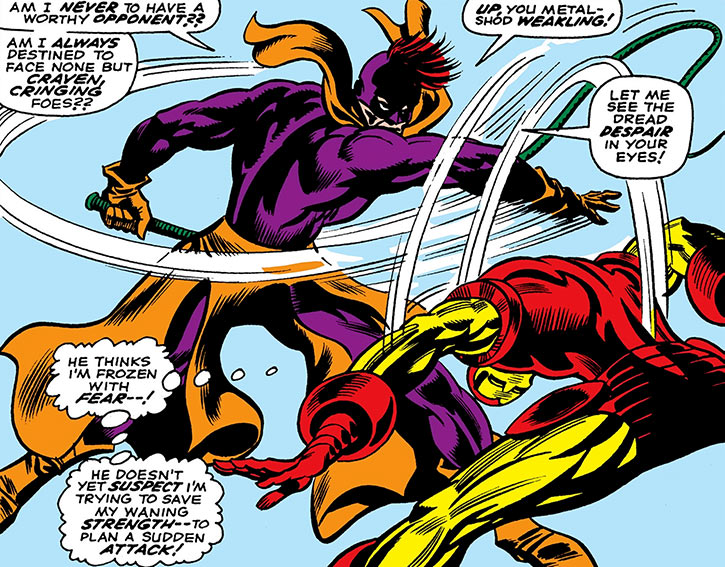 In 1975, Whiplash allied with the Melter (Bruno Horgan). They recruited the Man-Bull (William Taurens) to help them with their joint revenge against Iron Man. They attacked a comic books convention in San Diego to draw the Golden Avenger in.

However the Iron Man armour had been recently upgraded. Furthermore, during the fight the Black Lama made offers that resulted in the villains’ teamwork disintegrating as they tried to impress him. This soon led to defeat.

All three criminals were arrested by the SDPD. This likely put an end to Whiplash’s secret identity and led Scott to make his costumed identity his full-time career.

The lady or the spider

It might also be during the mid-1970s that Whiplash undertook two contracts for Hydra. The first was murdering Merriem Drew, which he did minutes before her daughter Jessica came to visit.

Using her Spider-Woman powers, Jessica Drew blasted Whiplash back. The surprised mercenary decided to leave. He had nothing to gain from a fight with an unknown superhuman opponent and his job was done.

Whiplash later worked as a bodyguard for Count Otto Vermis, then a top executive within Hydra. Vermis suspected that the young woman he had picked up as a short-term girlfriend was a S.H.I.E.L.D. plant. He had Whiplash execute her. The woman was indeed a spy (Jessica Drew again), but she escaped and blew up the yacht they were on, possibly killing Vermis and most of his men.

A combination of body armour and quick reflexes enabled Whiplash to survive the detonation.

Whiplash resumed working for the Maggia, though in the baser role of a costumed enforcer leading a crew of uniformed, well-armed soldatos on routine heists. While stealing a shipment of fur coats, the crew ran into Spider-Man.

After the hero was hit in the back by a burst of high-calibre mercy bullets, Whiplash stepped in and took him out. But the cops arrived before he decided to kill him. This missed opportunity got Scott in trouble with his section leader, a powerful masked criminal called the Wraith (Brian DeWolff).

Their heated exchange was interrupted by the arrival of Spider-Man and Iron Man, led by NYPD captain Jean DeWolff. Whiplash engaged Iron Man in a sort of hall of mirrors, reminiscent of the trick Iron Man had used to stall him during their first encounter. However, the heroes restored the sanity of the Wraith, who turned against Whiplash after he hit Cpt. DeWolff.

Scarlotti was arrested again, still in the grip of the Wraith’s mental attack.

In 1979 Mark Scott was assigned to a team with Blizzard (Gregor Shapanka) and the Melter. They attacked a large casino in Atlantic City. Their pillage of the gigantic armoured room was interrupted by Iron Man. The Avenger initially dominated the fight but his opponents soon rallied through solid teamwork.

Against orders, Whiplash was about to kill the immobilised Iron Man. But Stark’s bodyguard Bethany Cabe stopped him. Iron Man seized the occasion and defeated the Melter and Blizzard, while Cabe knocked out the shaken Whiplash.

The three criminals were broken out of Ryker’s Island almost immediately by Hammer’s organisation. Then they were flown to his floating villa in the Mediterranean. Stark was held prisoner here, but soon broke free. As Iron Man he defeated an army of Hammer operatives, including Whiplash. Most of the criminals were rounded up by the Monaco police.

Scarlotti would return during the 1980s… but as Blacklash.

Scott’s eyes will later be depicted as blue. But at this stage they are always coloured brown.

Whiplash is arrogant, self-centred and overconfident. He’s ruthlessly ambitious, and a sadist. His pride means he’s also very big about vengeance, often with homicidal intensity. Yet he was able to manipulate people and hide his evil streak, hinting at a so-called sociopathic condition.

During his early career Scott spouted lengthy, intricate ego-boosting monologues. Meanwhile, he toyed with his opponents rather than focus on killing them.

His dominant drive then became vengeance instead of ego, making him less prone to posturing. It also made him more likely to take sensible decisions, such as retreating when surprised by Spider-Woman (since he had nothing to gain and everything to lose in staying).

“If I don’t get some action soon, I’ll tear the ship apart !”

“Even at your strongest, you’d be helpless against me ! The name is — WHIPLASH !”

“Am I never to have a worthy opponent ?? Am I always destined to face none but craven, cringing foes ? Up, you metal-shod weakling !”

“What now, Iron Man — now that you’ve exhausted your bag of transistorized tricks — now that you are hopelessly, helplessly trapped before the steel-biting fury of my unrelenting weapon — now that you know there will be no relenting, no mercy from… Whiplash !”

“You are speaking to an artist, slug ! A master of the multi-powered lash ! I will do what must be done… when the proper moment is at hand ! Destroying one’s nemesis must be an act of inspiration !”

“You may be hot stuff when it comes to guessing games, section leader — and you may be my superior for now — but when I rejoined the Maggia I made it clear that I intended to do things my way ! Unless you’d care to argue the point …?” (cracks whip)

He might be renegade Kord Industries employee. See the last writeup in the Mark Scarlotti series for a fuller DCU History suggestion.

Whiplash’s very first appearance featured different gear and a different competence level than the rest of his early appearances. Thus, this entry has two sets of stats for clarity’s sake.

Bonuses and Limitations:
Charisma (Intimidation) is Contingent Upon wielding a whip and being able to hurt the target with it (-2).

Drawbacks:
SIA toward Playing with his opponent, Secret ID, SIA toward Machismo.

Bonuses and Limitations:
Charisma (Intimidation) is Contingent Upon wielding a whip and being able to hurt the target with it (-2).

Drawbacks:
MIA toward Playing with his opponent, Secret ID (Lost halfway through), MIA toward Arrogance, MIH of Iron Man.

Source of Character: Chiefly Tales of Suspense and Iron Man issues from 1967 to 1979. 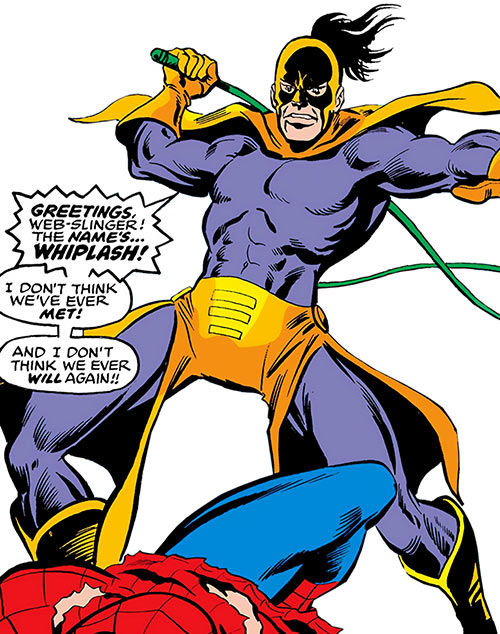 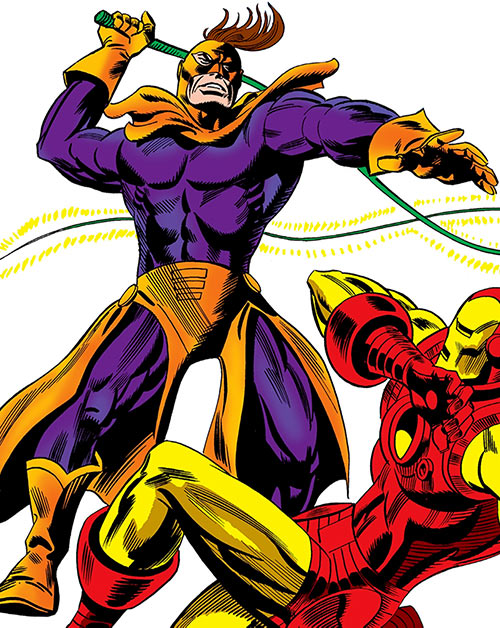 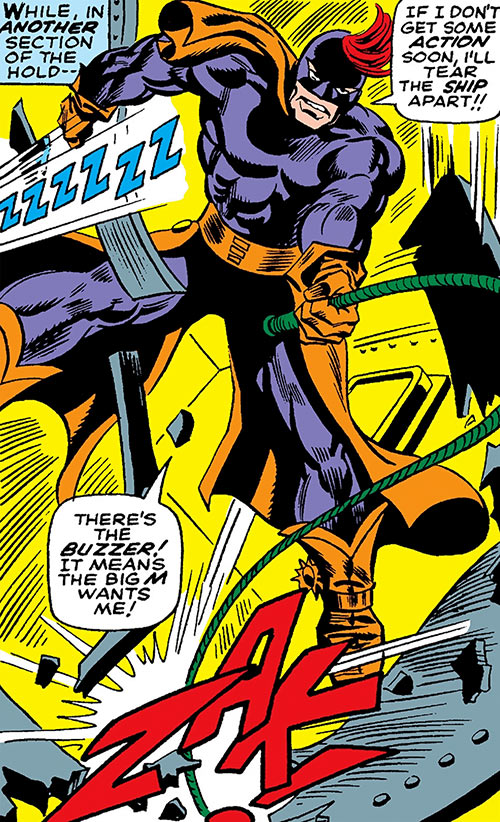 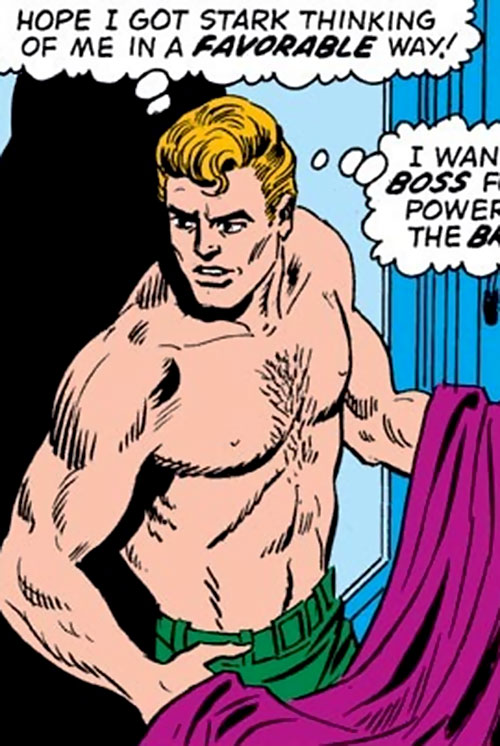 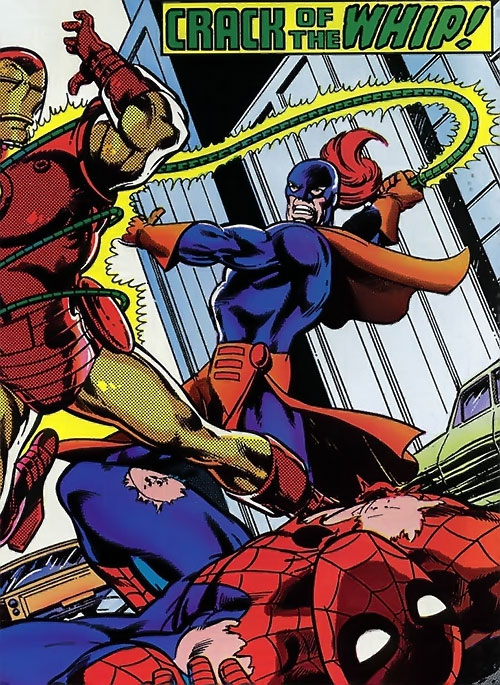