Before becoming a supercriminal, Emilo Storn was a world-renowned scientist and genius. His specialty was in artificial intelligence and robotics, with the study and control of weather phenomenon as his hobby. He used this expertise for creating fantastic devices, including his suit (which has a whirlwind machine incorporated in it), flying saucer and androids.

His suit gave him the ability to spin and move around at superhuman speeds, creating powerful winds, that he could direct, in the process. Additionally, as a ’master of weather‘ he had limited control over weather patterns. He had apparently trained in the use of his costume, since he was very apt at using it to its’ full potential.

Flawed, as robotic creations in the DC Universe always are, the suit was incapable of operating at low temperatures. Which is… unusual for electrical devoces. Most probably he had good enough control over the tornadoes that he spun that he could fly with the help of them also.

The flying saucer he used was another fantastic piece of equipment ; it was very fast and easily maneuverable, had limited force fields protecting it and had a powerful telekinetic beam capable of stopping objects attached to it. Without a doubt it would survive in space for some time also.

Lastly, his android creation Thunder/Lightning, a being capable of changing between two forms and using lightning as its’ weapon, was probably his real masterpiece. The android was completely self-conscious and advanced enough to pass for a human being. Additionally, it had powerful weather controlling powers including the ability to use lightning. Whenever Whirlicane showed up he would always utilize a new fantastic gadget to wreak havoc and steal some new dangerous equipment.

Emilo Storn used to be a scientist, specializing in artificial intelligence at S.T.A.R. Labs. He also studied weather phenomenon as his hobby. He gained the reputation of being the world’s foremost bio technician. But unfortunately, for unrevealed reasons, Storn was driven completely insane.

He started to hate humanity and began a career as a costumed supercriminal, carrying a superpowered suit of his own design. He intended to destroy humanity. He also created a fantastic flying saucer ship that he and his henchmen used for performing crimes.

The speed of a whirlwind…

His first crime was trying to hijack a train carrying oil in Metropolis. But Superman appeared and put an end to that attempt. Whirlicane’s team, with Whirlicane himself standing on the saucer giving orders, evaded capture after having immersed Superman in liquid lead. The Man of Steel could only get rid of this by flying through the sun.

The gang later turned up trying to hijack a transport plane carrying scientific equipment. But Superman, looking for Whirlicane, turned up again. The gang was unable to defeat the Man of Steel, who studied his opponent’s suit.

Having realized that the mechanism of the Whirlicane suit would be frozen stuck in cold, he sneakily pushed up the plane into the stratosphere where the cold shut down the Whirlicane. The megalomaniacal criminal was put in jail, but was later freed by the lawyers of S.T.A.R. Labs, who wanted him back to work for them.

… and the power of a hurricane !

Whirlicane, however, was only driven by hate. Thus, he next showed up as being the mastermind behind a scheme for stealing a Weather Machine at S.T.A.R. Labs. He used an android creation of his own, calling itself Thunder/Lightning (it had two separate identities and forms it could change between at will; one Thunder and the other Lightning) to attempt theft of the machine. 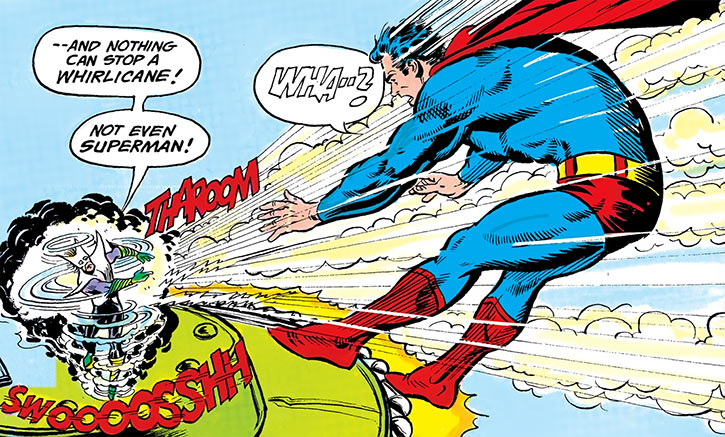 But Superman, as usual on patrol, interfered. The crime was stopped, but Thunder/Lightning got away to report his failure. Whirlicane nearly destroyed his android because of this, lashing out at it with his tornado powers.

The android was programmed to believe it was a former human criminal who had gotten powers by Whirlicane, and therefore had to perform some tasks for him in order to gain his freedom. Later, when Superman tracked Whirlicane to his hideout, Superman revealed to the android that it was, in fact, an android.

Thunder/Lightning was driven mad by realizing it wasn’t human at all, and that everything had been a lie, and unleashed all it’s energies immediately. Both the android and Whirlicane himself were apparently destroyed by the resulting explosion.

The supercriminal Whirlicane is, for a former scientist, a surprisingly well built man. He’s slightly above average height and built.

He wears a typical supervillain costume including a purple leotard worn under a white vest (with pointy edges at the shoulders), a white mask (with two pointy edges similar to the mask of Batman) and green boots and green gloves, both with multiple yellow stripes.

The only unusual thing about his costume is that the mask only covers his face, leaving his red blond hair visible in the back. His blue eyes, glowing with a fanatic’s glow, are also visible throughout the mask. IMO, actually a pretty cool costume…

Being a maniac he moves in an erratic and grand manner (as in constantly thinking “This world is mine !”) and often has a nasty grin. When using his powers he spins in place like a whirling dervish.

Emilo Storn, the man calling himself Whirlicane, is a megalomaniacal supercriminal. Meanwhile, he’s a true scientific genius capable of innovations beyond anyone else within the fields of artificial intelligence and weather control. Those are facts he likes to point out, saying that he’s a “Master of all bad weather”, and having “the power of a tornado” etc.

Apparently his only motif for doing crime, beyond insanity, is that it has given him an opportunity for wreaking large scale destruction upon the humanity that he hates so much.

He’s obsessed by his various plans and will create fantastic equipment in order to steal various items that can be used for destruction, preferably by various enhanced natural phenomenon.

He’s clearly insane, full of arrogance and madness, and believes that he could defeat any opponent, any time. Even if faced with overwhelming force (i.e., Superman), he’s likely to stay and fight for at least a couple of phases before making a “strategic withdrawal”.

His specialty is hijacking freight vehicles like trains and airplanes, then making off with their cargo in his flying saucer. Ultimately, he was no more than a brief annoyance for the Man of Steel, but could be an effective threat to more reasonably-powered heroes.

When he doesn’t immediately win he’s quite surprised. However, his plans are elaborate enough, with one or two reserve plans, to take into account any intruder in case anything goes wrong. Often he will even devise a plan for specific heroes in case these would show up.

Being full of himself, he enjoys having lesser henchmen around himself. These, of course, will be subject to constant taunts at any given opportunity and he’ll even kill them if they fail him. His need to constantly threaten and bully his henchmen proved his demise in the end, when he was destroyed by his android henchman Thunder/Lightning.

“With the Weather Machine I could have built a storm bomb, capable or creating a super tornado over Metropolis, worse than anything else. A worthy masterpiece by the Whirlicane, master over all bad weather !”

“I possess the force of a hurricane and the speed of a whirlwind — and nothing can stop a Whirlicane !” 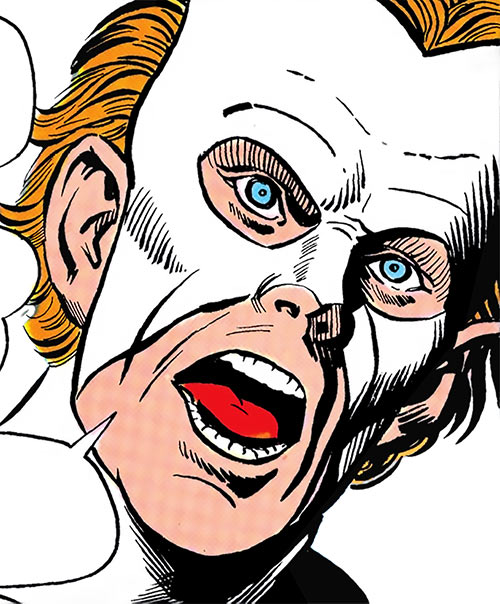 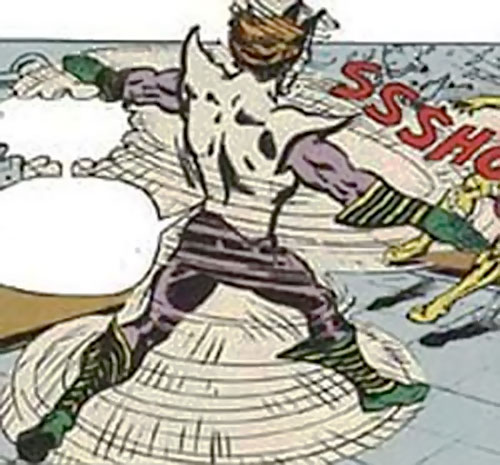