Pathetic, parody super-heroes the Inferior Five were mostly seen from 1966 to 1968. They even had their own 12-issues fab series !

They made a number of cameos later on, but our profiles are about the older material.

The son of the Bowman (who looks like Golden Age  Green Arrow… but with a red cape. A cape ?! For an archer ?!), William King is an excellent archer, but a terrible coward.

He only joined the I5 because he was more afraid of his father.

He wears an orange skintight outfit which does not cover his head at all. He also wears an archer’s hat with a white feather (a symbol of cowardice) in it. His chest symbol consists of a white feather as well.

He has the letters WF on his belt buckle.

Drawbacks:
CIF (Danger). Whenever dangers rears its ugly head, the White Feather must roll or be helpless. He might run away or might instead be paralyzed from terror. He can still shoot arrows, but they will not hit their target, though they might affect the situation regardless.
As a role-playing note, he is difficult to convince to go on dangerous missions.

Equipment:
Longbow, Trick Arrows. For example, a TNT arrow and a Shock Arrow. Borrow what you need from Green Arrow (Oliver Queen) or Hawkeye (Clint Barton). 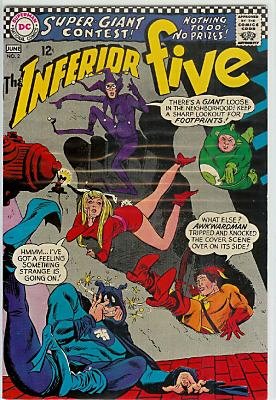