The White Rajah is a Golden Age  character, who was first seen in 1940. He appeared in Master Comics #1-6 and Nickel Comics #8, plus Wow Comics #1.

White Rajah was a four to five page strip which ran for a total of eight issues, of which only five are available. It was an unusual strip in that the lead character was an English teenager who was the White Rajah of the fictional 1940’s Indian state of Ramistan.

It borrowed heavily from the writings of Rudyard Kipling  and was very imperialistic.

It is unknown who created the character.

From his first story the White Rajah was shown to be adept at riding animals – both horses and elephants. But given his shown ability in handling the white elephant Sin Gee I gave him a blanket animal handling skill.

He was shown to escape bond several times so I gave him escape artist, same with being able to fight with bladed weapons. He has a Military Science (Survival) since he spent his formidable years growing up in the Jungles of Ramistan with only Sin Gee.

His high charisma derives from the fact that he is the ruler of a small nation and was a well-known peace maker among the jungle villages before he became Rajah.

Sin Gee is the sacred white elephant of Ramistan. He is smarter and stronger than the average elephant.

David Scott becomes separated from his wealthy planter father as a boy. Unable to find his son, his father leaves India heartbroken. While lost David meets and is rescued by the white elephant Sin Gee. As he grows older he learns to protect himself, à la Tarzan.

He eventually becomes a peacemaker to the various villages and tribes that dwell in the jungles of Ramisttan. He comes to the attention of the old Rajah of Ramistan. When he saves the crown from robbers with the help of Sin Gee and the old Rajah makes him the new ruler of Ramistan with the old rajah as his advisor.

In the jungle his costume consists of a white loin cloth and red turban. At the palace his royal gab is a traditional knee length blue jacket and light brown pants with sandals. His red turban is adorned with the Ramistan crown jewels at official state functions.

As with most Golden Age characters he doesn’t really have one.

He is kind and just ruler of Ramistan. He is also loyal to the British, whom he of course sees as the true rulers of India.

“Members of the war council, I bring terms from the enemy.”

“We’ve got to get there first Sin Gee !”

“That will do Sin Gee, we don’t want to kill him.”

He would now be a very old man who was a former ruler of the Indian province of Ramistan. Presumably, he would have been recreated on New Earth after having existed on Earth-S.

Bonuses and Limitations:
Growth is Always On and already figured into STR. 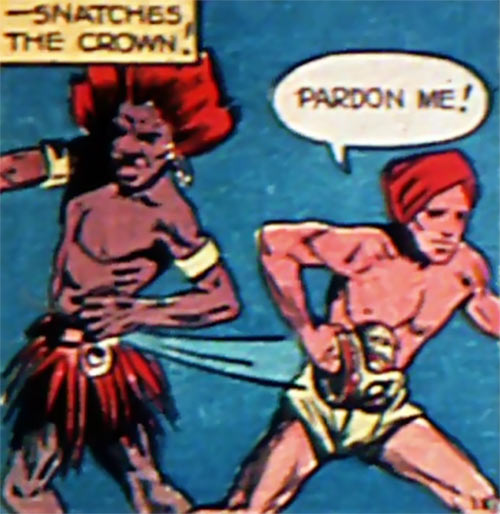 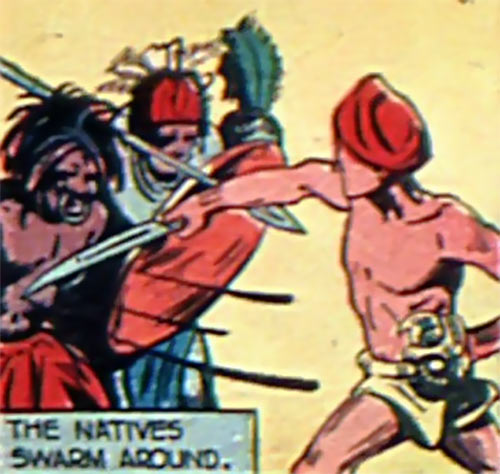