Kasper’s physiology was altered by his ingestion of the genetically modified herb given him by Killmonger, resulting in enhanced agility, speed, and reflexes, and in his senses being sharpened to superhuman levels.

He is still learning to cope with the changes however, and his senses are still vulnerable to being overloaded in extreme circumstances.

In combat he tends to fight at a distance, using his guns, rather than in close combat, frequently running along walls and moving around a lot.

As the White Tiger he wears a Vibranium -weave bulletproof costume which not only stops bullets but saps their momentum. Like older forms of Kevlar, it can be cut if you cut along the grain of the webbing, but cannot be punctured conventionally by blunt force.

The boots have special Vibranium soles that absorb sound and impact, enabling him to leap off buildings up to 8 stories tall and land without injury. He can also literally run up the sides of buildings (but cannot simply stand on a wall, say the way Spider-Man can), and walk on water.

The suit’s claws are retractable. They contain a new composite of the experimental “anti-metal” Vibranium, that can break down other metal alloys. His claws can cut through most common metals.

His Energy Dagger is a virtual blade with 3 settings: Non Lethal, Stun and Lethal. At its highest setting, the Energy Dagger can cut through forged steel like it was government cheese, and has been known to damage Ultron. At any level it can be wielded like a normal knife, or can project multiple missiles at targets (Multi-Attack).

Kimoyo Cards (keh-MOY-oh is the Bantu word for “The Spirit”): These are global positioning and communications device. It can also home in on the unique energy signature Panther’s Energy Dagger “marks” his prey with.

He also uses a pair of standard 9mm pistols which fire anaesthetic-gel bullets.

Kevin Cole was the son NYPD hero cop “Black Jack” Cole and Ruth Cole, a New York Jew. He was nicknamed ’Kasper‘ because his skin tone was so light, while his father’s was so dark. 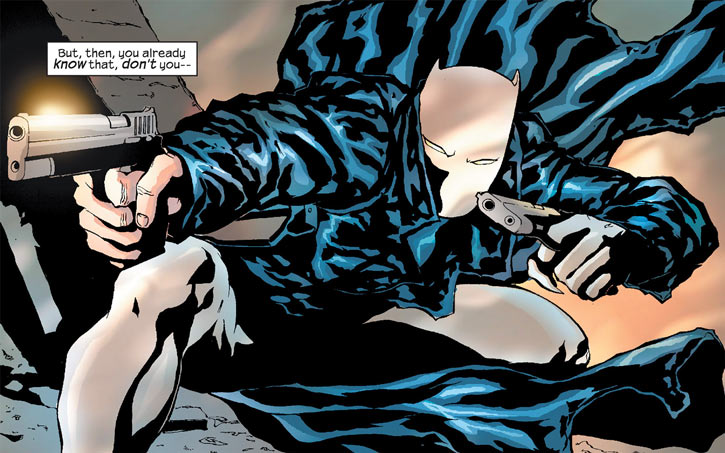 When he was a teenager, Kevin’s father was framed and sent to prison. ”Kasper” was, and remains, unaware that his father was also Kibuka, the mythic leader of the powerful 66 Bridges gang. Kevin nevertheless followed his father into the police force working in the 74th precinct. He became a narcotics detective.

When a brief relationship with a friend called Gwen left her pregnant, her parents threw her out. She moved in with Kevin and his mother. Kevin is the sole method of support for the 3 of them.

While at the apartment of his mentor, Sergeant Tork, a former ally of the then-missing Black Panther, he saw one of the Panther’s suits. He stole it, and started wearing it under his clothes.

When sent on an errand by crooked Lieutenant Sal Anthony, Cole’s crew was ambushed on a drug bust. This left most officers hospitalised, but he survived thanks to the costume being bulletproof. While on a temporary suspension Cole started operating in the costume, trying to bring down Sal, whom he’d realised had set him up.

Kasper raided a meeting between crooked cops and members of the 66 Bridges. He discovered that the 66 Bridges had grown into a large organized crime syndicate, branching out into legal ventures using the Grace & Tumbalt PR Corporation as a front. It had ties to influential politicians, businessmen, and the intelligence community.

His assuming the identity of the Black Panther drew the attention of T’Challa’s adopted brother, Hunter. Also known as the White Wolf, Hunter was the chieftain of the outlawed Hatut Zeraze, the Wakandan secret police.

Hunter offered to take Cole as his protégé, but Kasper ultimately refused. He soon encountered T’Challa, alive and well. The Panther was hiding in Brooklyn, although he refused to answer Kasper’s questions. 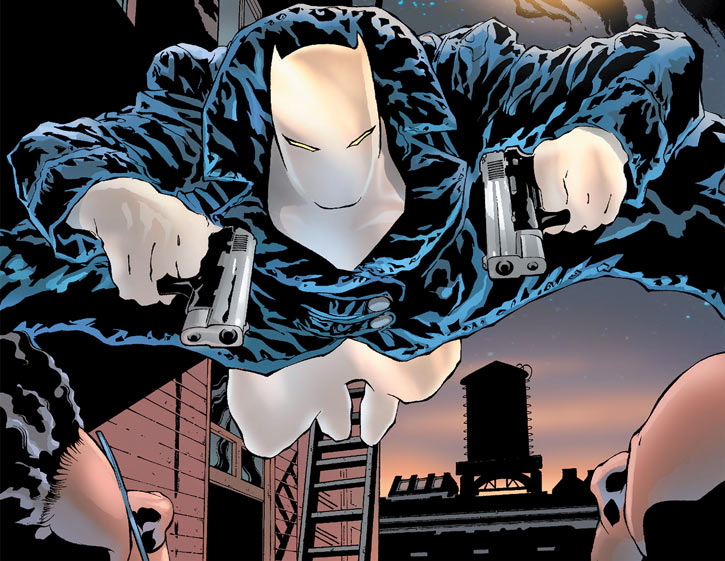 He also learned that the leader of the 66 Bridges was known as Kibuka, but he couldn’t find any clues as to his true identity.

During his activities, Sal Anthony had also been hunting him. Anthony incorrectly deduced that Sergeant Tork was the new Black Panther. He captured and apparently killed Tork. Cole’s grief over his friend’s death made him desperate, so he agreed to join Anthony’s crew.

He managed to turn the tables on Anthony, framing Sal for trying to kill him. This got Anthony demoted to being his crew’s sergeant, where Kasper could control him.

Following an encounter with the Falcon, he realized that he was not operating as usefully as he could be in costume. He requested of T‘Challa that he be allowed to undergo the Wakandan Rite of Ascension, to earn the right to eat the heart-shaped herb which gave the Black Panther’s their powers.

A trip to Wakanda

T’Challa reluctantly agreed, but in the final test Kasper had to face the Wakandan Chieftain, Erik Killmonger. They fought for a while, before Killmonger called for a break to allow Kasper to catch his breath from the previous trials. Kasper soon realised he wouldn’t be able to overcome Killmonger.

Kasper accepted, and was changed by the herb. He soon adopted the identity of the White Tiger, using a variation of the Black Panther suit he had previously worn. He managed to find Sal’s son without Killmonger’s aid, reducing his debt.

Cole later learned that Sergeant Tork was still alive, having faked his death with T’Challa’s aid. This led him to realize that T’Challa had been manipulating most of his recent activities, and surreptitiously aided him where he could.

T’Challa also revealed to Cole that he had direct African lineage, which would help the Wakandan tribal council accept him as a White Tiger.

Kasper continued to operate as White Tiger. He used this identity to further his career, searching for a big break which would get him a promotion and a pay rise.

He then learned that the 66 Bridge’s legendary subway “Money Train” had been derailed under Little Mogadishu. It had been on its way to pay off the judges, politicians and cops on the 66 Bridge’s payroll. 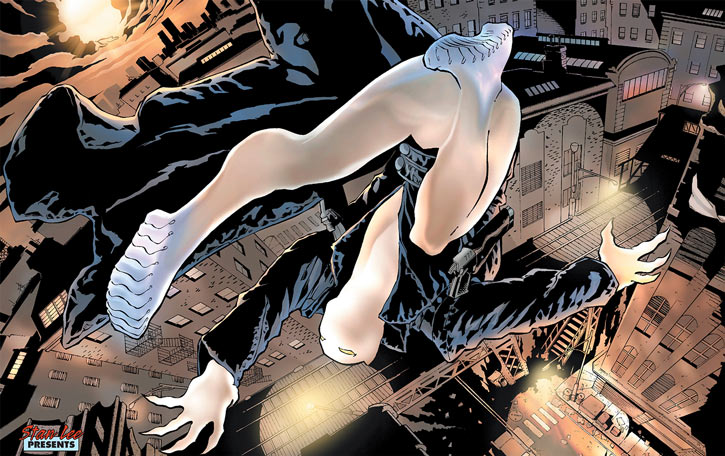 The White Tiger went underground to find incriminating evidence. This became a race with the crooked police or street gangs, who engaged in gun battles during their own search.

Cole was attacked by the freelance spy Junta. Junta had been hired by the 66 Bridges to recover the Money Train’s contents. Both were in turn knocked out by James Rhodes, who left them cuffed to the train.

Rhodes then returned to help Kasper escape, Junta having got away on his own. He revealed that he had marked the train’s money with a chemical tracer to locate the top echelons of those in the 66 Bridges pockets. Rhodes convinced Kasper, Junta, and local Muslim minister Josiah X to band together and take down the 66 Bridges.

They hunted down those receiving payoffs from the 66 Bridges. They eventually made their way up to Nigel ’Triage‘ Blacque, corporate CEO of Grace & Tumbalt.

In a climactic battle, Kasper was forced to choose between turning in Triage and helping the badly wounded Rhodey survive the encounter. He helped to save Rhodes’ life, and Junta ultimately managed to defeat Triage and turn him over to the authorities.

Driven and ambitious, Kevin seems determined to live up to his role models, his father and the Black Panther. While he uses his costumed identity to fight crime, he also tries to use it to further his career, gathering information which he can use to arrest criminals.

He only takes advantage of it in this way when he can afford to, and will leave the arrest to other officers if the alternative is letting criminals go.

He still has trouble deciding how to react to his situation. He has been hesitant when deciding between chasing criminals and helping save lives, although he eventually chose to help those in danger.

One of the main factors guiding his development as a costumed vigilante is his impending fatherhood. He wishes to be someone that his child can be proud of, the way he’s proud of his father, whom he believes to be unjustly imprisoned.

When in costume, he talks in measured precise tones, putting on an Wakandan accent. He tries to give the impression of being cool, calm, and in control, as he imagines T’Challa being. He is still, however, relatively inexperienced, so this mask can sometimes slip, especially when interacting with other costumed heroes.

Out of costume he speaks in a more conventional, New York accent. He tends to be more temperamental, and lets his stress show more often, coming across as humourless and aggressive.

Even though he pined a while for his high school sweetheart, Grace, or T’Challa’s bodyguard Okoye, who resembles Grace, he has come to accept his responsibility to Gwen and their unborn child.

[As the Black Panther] “I am new to your lands. Your ways are alien to me – however, in any culture, evil is indeed evil. You, Detective Scruggs, are a police officer. Sworn to protect the innocent – but you prey upon them – sacrifice your very soul… for this. For worthless paper. I trust it is worth it to you. We will have an understanding between us, Detective. Speak of it to no man from this day until your last, you will agree to act as my servant – and I will agree to not carve your heart like a roast.”

“Okay, it works like this : making felony arrests gets me promoted. Getting promoted gets me more money. Getting more money chills Gwen out. Chilling Gwen out is all I live for.”

[As White Tiger] “You dare insult a scion of Wakanda with your petty lucre ?! Begone !”

“There’s a line. You crossed it. Come near my family again, I’ll kill you.”

[As White Tiger] ”I am an acolyte of the Panther Cult — a White Tiger ! You, councilman Terrine, are an evil and corrupt man. Payoff money — blood money — from drug dealers is in your possession . Your sin has found you. You are a marked man, councilman – there is no place the sun rises that I cannot find you.”

While using the Black Panther identity he had DEX of 05 APs, STR of 03, BOD of 03, 25 HPs, no Powers, Acrobatics at 03 APs, Martial Arts, Thief and Vehicles (Land) at 04, and Weaponry (Firearms) at 06. His guns fired regular bullets (EV 04) rather than the anaesthetic gel, and he occasionally used other weapons, such as shotguns.

Helper(s): Marvel.com, (everyone who helped with the stats for the Black Panther Write-up’s equipment, although the energy dagger works differently), Michael Davis, Sébastien Andrivet. 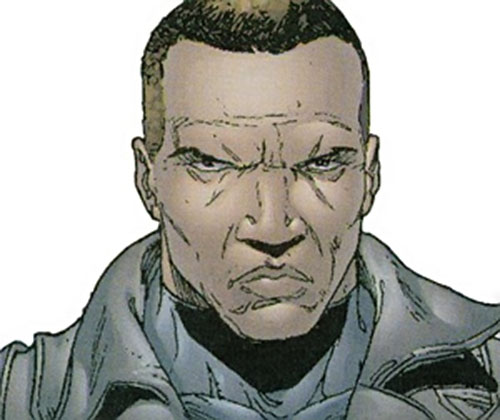 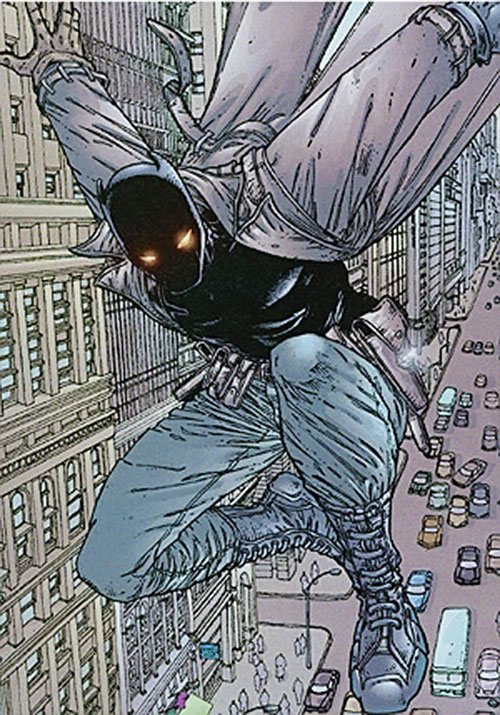 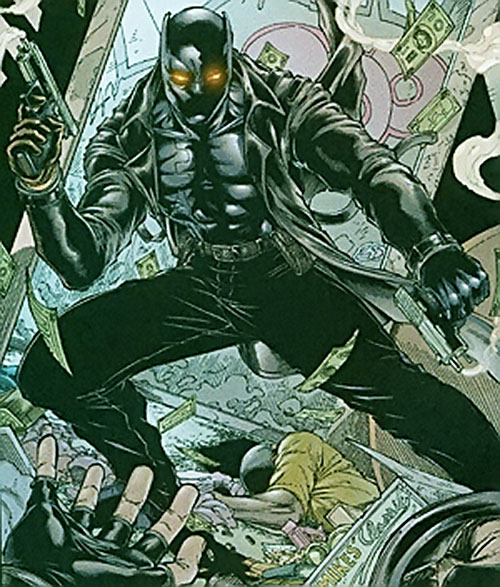 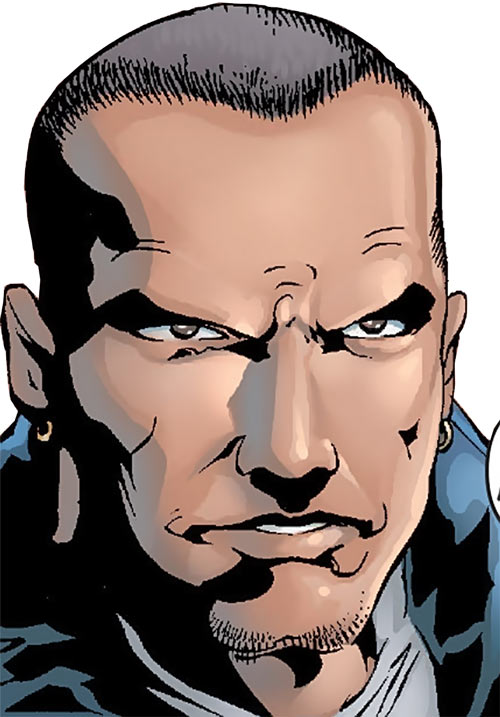