History ? A heavy lot ! In some other write-up perhaps, even though most Marvel fans should know all about the Squadron Supreme, their Earth and the Utopia-program. And perhaps even about their exile on the ordinary Marvel-Earth in the Quasar comics and their appearance in the Avengers ?

In short : the Squadron Supreme were the Earth’s champions for good, but were used against it under the control of the alien Overmind. After the defeat of the Overmind the world lay in ruins with severe problems.

The Squadron initiated a program called the Utopia program in which they wrested total control of the American government. At first Stanley was forced to remain away from his family, but eventually the entire family moved in into the newly formed Squadron City.

The plan was to fix every problem in America and later in the world, problems such as hunger, economy, crime, war, jobs, environment and disease. Under a fascistic line they succeeded, but in the end they were opposed by several superhumans and many were killed in the battle that followed.

Later on while saving the Universe from the so called Expanding Man they were all exiled from their Earth, generally called Earth-S to the ordinary Marvel-Earth by their world’s Wizard Supreme. On Marvel-Earth they have made themselves at home at Project Pegasus and occasionally fight crime.

Whizzer appears to be a slenderly built muscular man in a skintight bodysuit. His costume nowadays is completely black covering everything except his lower facial parts. On the chest, back, forehead, backhead, thighs, arms and shoulders there are stylised W-letters in yellow. He also wears yellow goggles protecting his eyes.

All yellow colors resemble lightning when he moves around really fast.

Originally Stanley was a compassionate, careful and joyful family man. The family was the most important thing in his life and he would be with them during any free time. His work with the Squadron was also extremely important. Stanley is a follower and works well in a group.

Since arriving at the ordinary Marvel-Earth he has hardened a lot. At first he whined about them all having to go back again, but has since accepted his position in his exiled Earth.

He now lives together with his Squadron members at Project : Pegasus still trying to figure out a way to get back to their home dimension again. He has always been impulsive and is now even more so, almost to the extreme.

In combat he tends to figure out good offensive plans, but unfortunately neglects to look after his own defense ; usually he runs around making attacks and dodges, but never looks behind himself.

Hyperion: “Zarda might not approve.”
Whizzer: “She wants to spank me, she has to catch me first.”
Hyperion: “Maybe she couldn’t. But I could… if she asked me nicely.”
Whizzer: “Only if you cheat by flying. On foot, you come in third, after my dust.”

Either use the entire Squadron Supreme or the old JLA of which it is a copy. The Squadron Supreme are world leaders and do not fit very well in the DCU. The Whizzer is of course a copy of the Flash. Optionally they could of course be used as the premier super team of another dimension or as they are in a campaign set on Earth-S.

Of course, post-Crisis they could substitute for the Crime Syndicate of America; whether or not they’re evil, the Squadron origins give alternatives to their being other-dimensional counterparts, since the post-Crisis universe disallowed that at the start.

The Whizzer, for example, could be the new Johnny Quick (of the Crime Syndicate, Sinister Syndicate, Squadron Sinister, etc.), having changed his name after the heroic Johnny Quick died during “Terminal Velocity”. He wanted to get away from the whizzing jokes, you see… Jesse Quick is not too happy about him, after all.

In the DC universe, the Whizzer would be tied into the Speed Force. 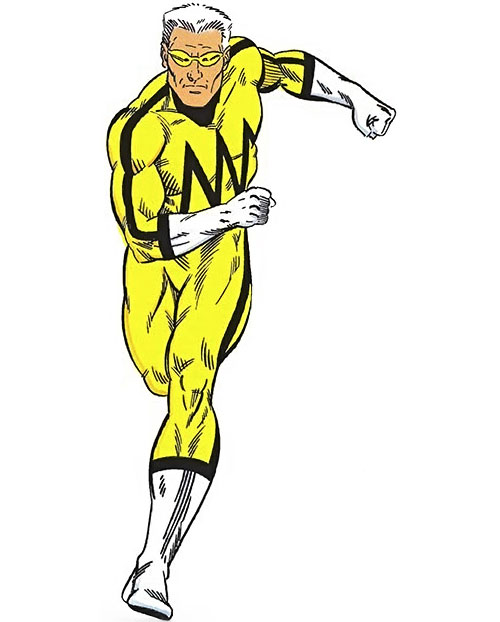