Widowmaker is a large, muscular man.

He has trained in hand-to-hand combat for 30+ years. He knows an incredible number of holds and strikes, and could hold his own against Captain America (Steve Rogers) himself.

His strength and endurance are enormous.

Both Widowmaker and Captain America were weakened to an unclear degree when they fought. Cap by exhaustion and cold, Widowmaker by Snowfall’s psionic  influence. This absence of solid benchmark makes the game stats tentative.

Widowmaker is the most skilled guardian at Dovecote. He seems to be the captain of the guard there. He’s a Francophone, perhaps a Frenchman.

One presumes that before joining Dovecote he had a long career as a martial artist and bareknuckles fighter. This may have included encounters with other hand-to-hand combat masters of the Golden and Silver Age .

When Captain America reached the gate of Dovecote, Widowmaker engaged him in a hand-to-hand duel. Since the Star-Spangled Avenger was cold and tired, his opponent gained the upper hand. Widowmaker started smothering Cap in the snow. 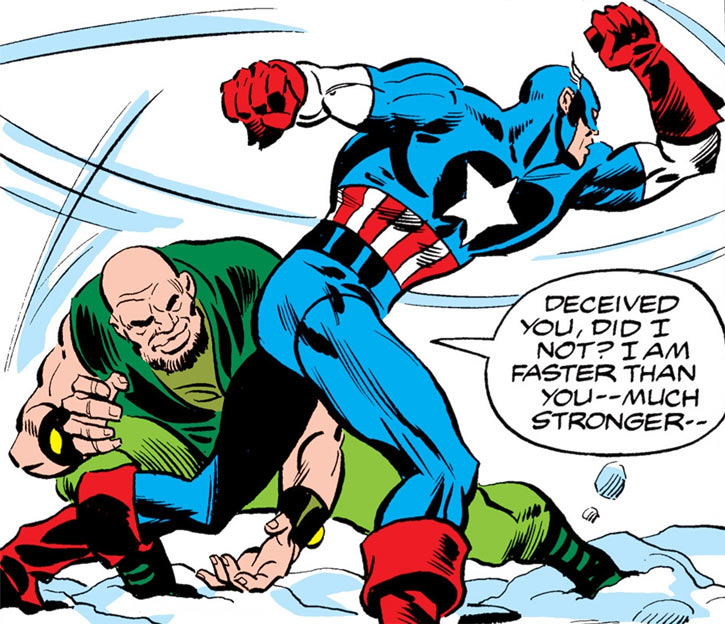 Cap was saved by the psychic Snowfall. She created an illusion of Widowmaker fraternising with Cap in the mind of the owner of Dovecote. The man ordered Widowmaker to stop his treachery. With the guard distracted by his boss’s nonsensical orders and accusations, Cap sucker-punched him.

Once Captain America entered the main Dovecote building, Widowmaker gave orders to evacuate all clients and blow the fortress up, as per procedure. He has not been seen since.

Perhaps nobody ever found Dovecote again. Or perhaps some did but did not live to tell.

Basically, Green Arrow’s costume without the hood, and much bigger.

He’s big on demonstrating that he’s the greatest hand-to-hand fighter alive. Therefore, pitting his skills against Captain America himself was the chance of a lifetime.

“I am called Widowmaker, mon brave ! I hope that suggests something to you !”

“It is said you have trained all your life to be the best fighter there is ! A lie, mon cher ! You were Captain America for just four years during the war — and were frozen in suspended animation for decades ! But I — I have been training and fighting without cease for over thirty years ! And I am better… than… you !”

I could see Widowmaker and Wildcat (how’s that for dramatic names ?) reaching a draw after an in-ring match during the 1960s. Just when De Gaulle had left NATO, for instance, creating a certain tension. 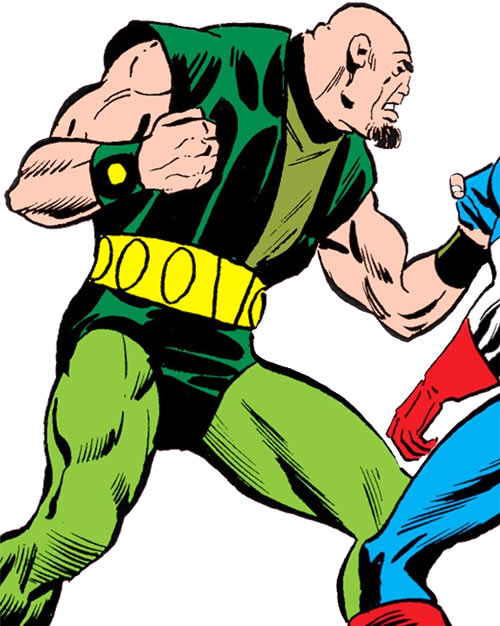 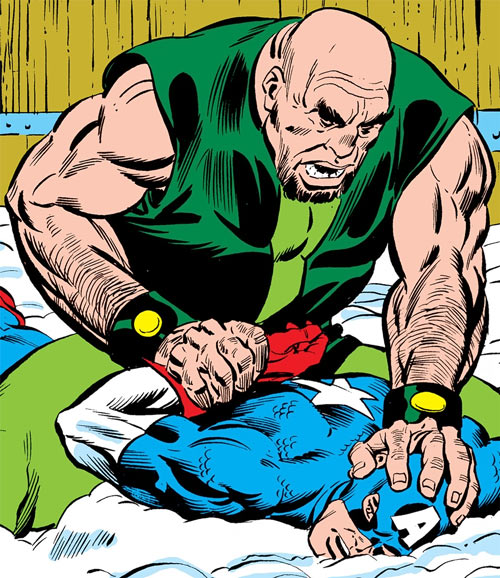