This story seems to have flown under the radar, and TMK it hasn’t been collected. But *I* liked it fine, and it’s a good read.

There are S P O I L E R S for the story in this article, though I didn’t spell everything out.

Rosa’s main ability is her ability to converse with all sorts of animals. Furthermore, she can also tap into animal racial memories and access their myths and legends. The communication is telepathic – though at this point she still need to talk to converse.

Though she has no special ability to control animals, there are persistent tales about prophets such as Rosa within the animal kingdom. Therefore, many animals are willing to follow her if she can prove that she is the one. Some will even trust her immediately. But some have no special interest in those stories and will not change their attitude toward her.

Big, mean animal who don’t like humans (or would eat people) will have a poor Attitude toward her in terms of DC Heroes RPG Character Interaction. Animals who live in synergy with humans (such as many urban animals) will likely have a better Attitude.

Of course, the culture of a specific ’tribe‘ of a animals may represent a further modifiers, as will prophecies about people like Rosa. For instance, the elephants she met considered from their legends that their job was to serve as advisers to prophets like her.

Aren’t you a little short to be a stormtrooper ?

Her physical abilities seem abnormal for a 13-year old. Rosa :

In game terms this is a robust amount of Hero Points  combined with a decent DEX, a good BODY for her age and some linked Skills. I have assumed that she was burning HPs for all her major feats in the story.

At one point, Rosa correctly identified a smell of dog piss as that of a mastiff bitch in heat. I have assumed she would be increasingly capable of demonstrating a superhuman sense of smell and odours interpretation.

Rosa has undocumented abilities to morph into a bestial form. At one point she starts growing and manifesting horns and glowing eyes. Though she fails to maintain that form, she seems certain that she can manifest it again and become stronger and faster than a large adult male.

DEX 05 STR 04 BOD 04 are possible Attributes for that form, which I suspect also has Animal Mimicry and/or Zoomorph. Fully assuming this form is likely Marginal at this point.

Rosa is a 13-year old big city kid. Since she was an even littler girl she has had strange, cryptic dreams featuring ancient nature and animal-headed gods from cultures around the world. She also was prone to occasional blackouts accompanied by similar visions.

One day, she experienced one such confusing blackout whilst baby-sitting her 14 month-old kid brother. Feeling irrationally guilty and ashamed and having a strong urge to be outside, Rosa ran away from her mother’s apartment after leaving Michael in the care of their helpful neighbour.

Unable to go home for no reason she could formulate, Rosa remained a runaway in New York for two months. She lived as a homeless kid and panhandler through a thankfully mild November and December. During that span, her visions became stronger and more frequent.

Torez was eventually found by a large middle-aged man, who told her he knew about her dreams and visions. He took her to a creepy abandoned house where he lived along with a pack of Great Danes.

The man turned out to be some sort of evil shaman wearing dog skins. Rosa ran for her life, away from him and his dogs. She managed to evade them by climbing a high fence, but knocked herself out when she fell.

When she woke up there was a German Shepherd watching over her, calling her by a name and telling that they needed to talk.

Some answers at last

The dog, Hylax, had apparently been sent by the nature god (alternatively called Cernunnos, Tapio, Chullachaqui, Pan, Herne, etc.). This divinity had infused part of his essence into Rosa, making her an avatar of sorts.

The helpful Hylax assisted in replacing Rosa’s lost sneakers with overlarge work boots (and strips of fabric to pad the inside). He also helped her find food and discreet shelters. Then the dog took her on the quest he’d been detailed to.

Hylax introduced her to a succession of influential animals in New York, so they could accept her apparently divine authority. The ruler of the local birds, a wealthy magpie named Limmershin, had her submit to a test to prove that she could be trusted. Torez was to climb a huge and decrepit industrial chimney on top of which the birds deposited a gold ring.

Experiencing visions about the ancient history of the birds during the climb, she succeeded. Rosa was declared to be queen of the birds by the magpie.

Hylax then took her to a greenhouse on top of a skyscraper where she communed with a variety of butterflies, who explained her that she was their guardian – the lady of the beasts, of the birds, of the sea and of the air, a queen of the animal kingdom who was destined to take mankind back in tune with in nature. They also warned her of false prophets looking to kill her.

When she came down, she sewed herself a sort of strange ritual costume.

The bad man is back

Munin, the raven who found her some thread and a needle, warned Rosa that her baby brother Mike had been kidnapped by the evil shaman. The man had found Mrs. Torez’s apartment and knocked her unconscious before grabbing the baby.

Clad in her strange clothes and still running around in size 9 work boots, Rosa grabbed a random rat. She had it take her back to the old town. This was a mistake – the rats had their own god, and did not wish to accept the sovereignty of Rosa. Thus her “guide” took her to “the big green thing”, a crocodile the rats treated as their king.

After experiencing visions of Egyptian times as seen by the crocodiles and their god Sobek, Rosa was attacked by the croc. Yet she managed to fatally stab it in the underbelly with a sharp piece of rebar. While she was passed out, the somewhat inept but very impressed rats recovered the shoe she had lost in the struggle. They did so as a gesture of allegiance.

Torez tried to have the rats, clumsily eager to serve, take her to the evil shaman’s place. But they just took her to random places until Hylax found them.

What is your quest ?

Asking her to be patient, Hylax resumed the last step of the current quest. He took her to the City Zoo to receive advice from the elephants. 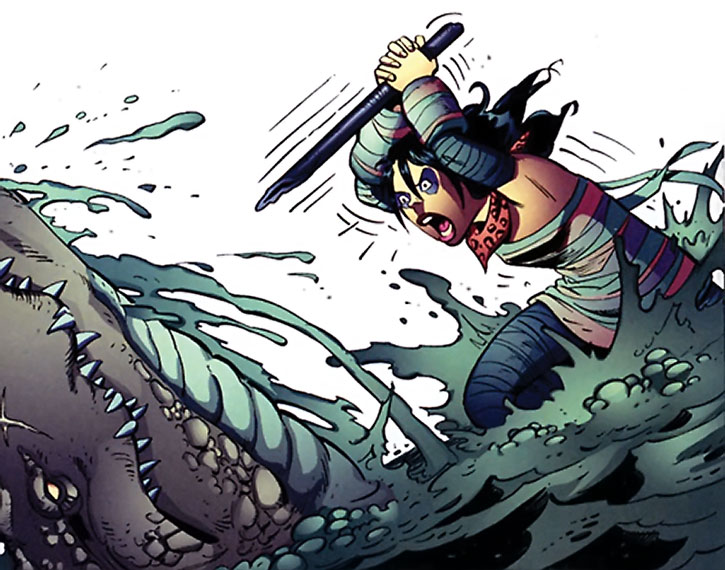 However, little Rosa did not understand the tale of the elephant about Lord Ganesh  and started throwing a tantrum, he slapped her with his trunk. The pachyderm made her realise she did not have any plan to kill the shaman and recover her baby brother. Rosa recognised the elephant’s wisdom and they came up with a plan.

Rosa had an army of her bird subjects survey the city until they found the house. Then she had the rats weaken the flooring of the porch and lay in ambush. When Hylax came to challenge the shaman’s Great Danes to a fight, the big dogs went through the floor of the porch. Then they were mobbed and killed by thousands of rats.

Rosa went to confront the shaman, who started turning into a bestial hybrid, stunning Rosa until Hylax attacked. The dog was rapidly knocked out, but Rosa started also turning in a bestial form. Her opponent fled to use Michael Torez as an hostage.

As the shaman was dangling Michael from a hole in his house’s roof, a mass of birds attacked. They made the shaman fall and grabbed the baby to fly it back to Mrs. Torez.

Having reached a better understanding of her role and saved her baby brother, Rosa decided not to go home. But she wrote a letter to her mum and had some animal deliver it discreetly.

Flanked by her dog and her raven, she then started assuming her responsibilities. Perhaps by gaining the allegiance of more animals, or by denouncing more false prophets of the coming alliance of man and nature.

Rosa is a kid with a bit of an attitude and a certain toughness. She’s generally a good girl and has a good sense of wry humour, but when she’s pushed too far she can get surprisingly dangerous.

Being already 13, she’s fairly mature and smart. And though she acknowledged the unreal nature of what was happening to her, she took it in stride with surprising mental stamina, only crying once.

As she increasingly got in touch with whom she was becoming, she started behaving more like a divinity of the wild. Thus, her determination when hunting down the evil shaman was that of a huntress… and a killer. Rosa is fast evolving toward becoming a sort of shaman queen of the animals of the city, with a messianic mission and vision.

“This is insane. This is totally insane. […]Look. No offence, but I think you’re just a figment of my imagination. I mean, it’s not as if any other animals have ever spoken to me.”

Rosa: “Was the robin serious yesterday ? He really thinks I’m going to kill someone ?”
Hylax: “He’s a wren.”
Hylax: “You know, this really does mean that I’m crazy. Talking to animals is all well and good. But once they start telling you to murder people…”

(As Hylax takes her to the city zoo to receive advice from the elephants)
Rosa: “I suppose we could spring a gorilla or something to help us.”
Hylax: “Yeah, ’cause you had so much power over that crocodile.”
Rosa: “Hmmm. Okay, maybe something smaller than a gorilla. A snake ? A really big snake ?”
Hylax: “Shut up and climb.”

Rosa could fit practically anywhere. She would be just fine in the DCU. It might be because of the Shawn McMannus art, but I thought she would fit just find in the Sandman mythos, where divinities such as Bast were seen to have dominion over animal species and where the Red exists.

She could be combined with Maxine Baker (Animal Man’s daughter), but it’s probably better for her to be a separate character. Maxine could in fact be a rival, having a direct connection to the Red and “bypassing” the union of nature gods empowering Rosa. 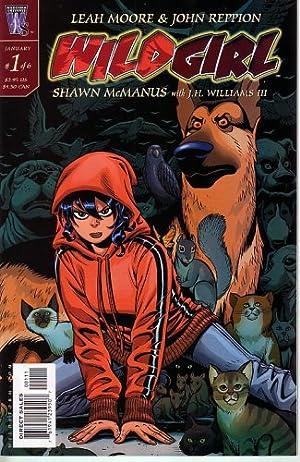 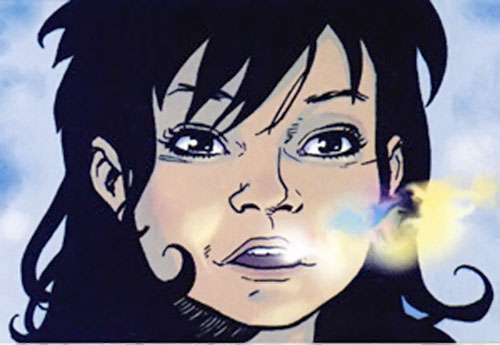 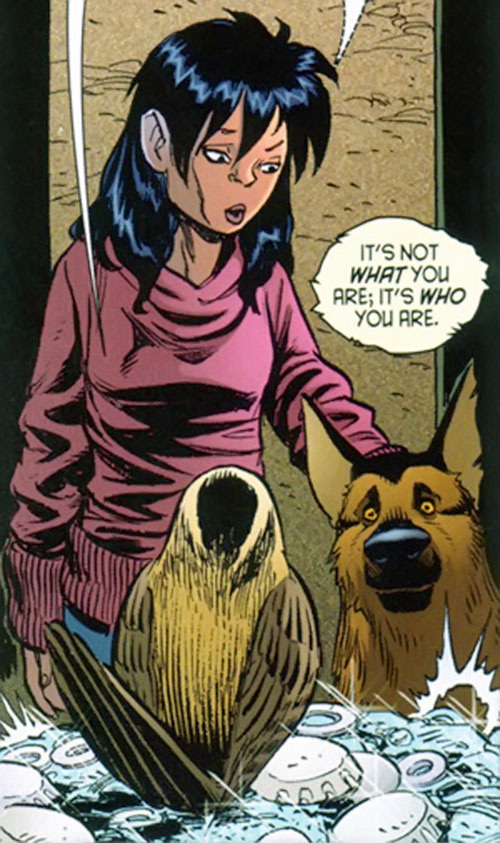 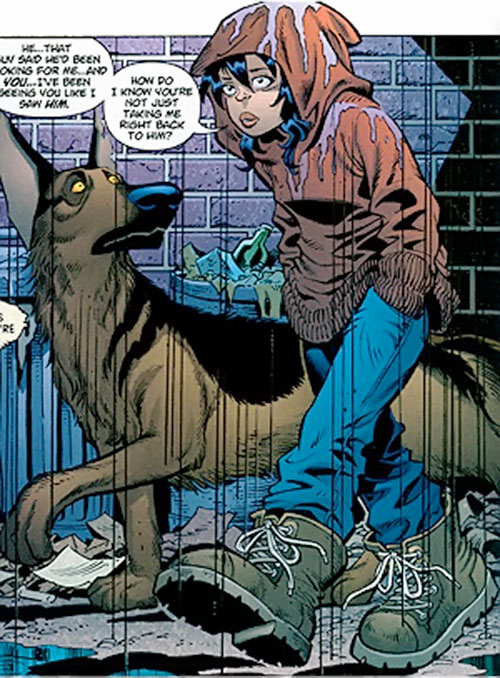 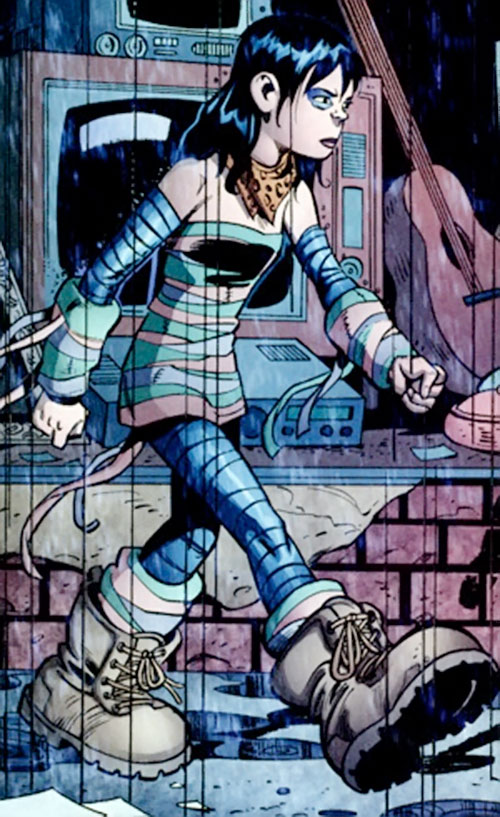 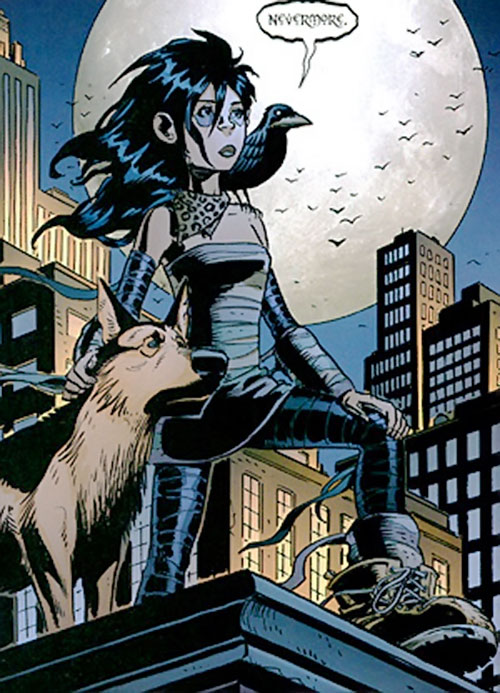