It is one of the TV shows by the Kratt brothers to teach kids about zoology.

This profile only covers the first season. Specifically the first 21 episodes of Season 1, which is what’s on Netflix as of this writing.

One conceit of the series is that the heroes use super-tech to mimic animal capabilities. I’ve watched several episodes with my kids and thought… hmmm, how would I model what they do in DC Heroes ?

Through this pursuit they have put together a specialized team of three young people to be their eyes and ears from afar. This team develops new technology and teleports it directly to the guys in the field, even shrinking the duo in size.

Their most impressive and constantly evolving tool is their amazing Creature Power Suits. These suits give the brothers the animal’s natural abilities. It also allows them to get up close and personal with the animals they study.

Outside the Tortuga team, there is also a network of children who endeavor to help animals in trouble. The Tortuga team and the Kratts know the individual children by name all around the world and when encountered may ask them for help.

These children may also contact the Tortuga team. A communication they call “Creature Alerts”. The child’s icon, an image of their face, flashes on screen. Koki can answer the call and talk to the child directly on the view screen.

The Kratt brothers are in great physical condition and are excellent swimmers. They are also very good at athletic activities like kayaking and snowboarding. Martin is the better swimmer while Chris is the stronger climber.

The Kratt Brothers use Creature Power Suits and power disks, with the DNA of a specific animal, to transform their suits into animal shapes. They gain all the abilities and disadvantages plus the size of the animal represented on the disk. The transformation is accompanied by a bright flash of green or blue light. 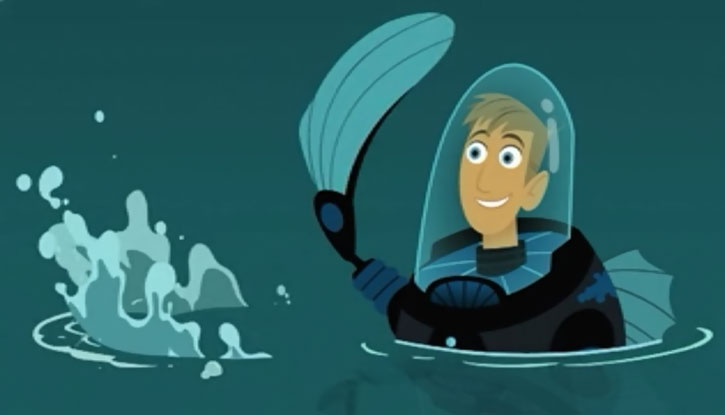 Instead of actually taking on the animal form. Their suits transform into the shape needed for the abilities of the animal but the Kratts don’t actually become the animal; an outside viewer would percieve them as men wearing suits.

They will gain Shrinking as needed and if the animal is larger the suits will grow. On rare occasions, the shrinking power inherent to the Creature Power Disk can be ignored as seen with the Firefly disk. However, this must be selected during transformation, once shrunk the suit must be de-activated to disengage shrinking.

When using the Creature Power Suit the Kratts must make physical contact with the animal depicted on their creature power disk. The second thing the user must do is press their activation button. These huge buttons are conveniently placed in the center of their chest.

However, they are also sensitive and the Kratt brothers have had their powers prematurely deactivated by bumping the buttons. 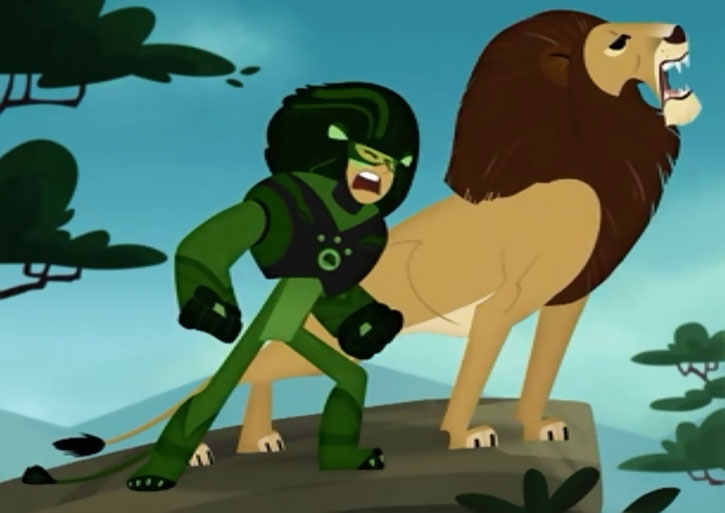 Another rarely seen problem with the creature power suits is when it gets damaged it malfunctions. The Reliability Number becomes an 11 immediately upon taking even a single point of damage. A reliability roll is incurred immediately and then as often as the GM sees fit.

This was the only time we saw a shape changed into an animal without a Creature power disk. Chris became a half-man, half-Tasmanian devil and took on the animals psyche as well. In another episode Martin had his suit damaged by a Blue Jay while holding an acorn. Martin became an acorn himself and, much to his delight, grew into a fully grown oak tree in seconds.

In one episode an octopus got tangled in both suits and activated them together while touching a walrus. It became an Octo-walrus, later it touched a shark and added its features as well, then a whale, and finally a mackerel.

It was able to use the Shape Change from the two suits to copy features from all of these animals into an amalgam animal. This is the only time the suits copied more than one animal. 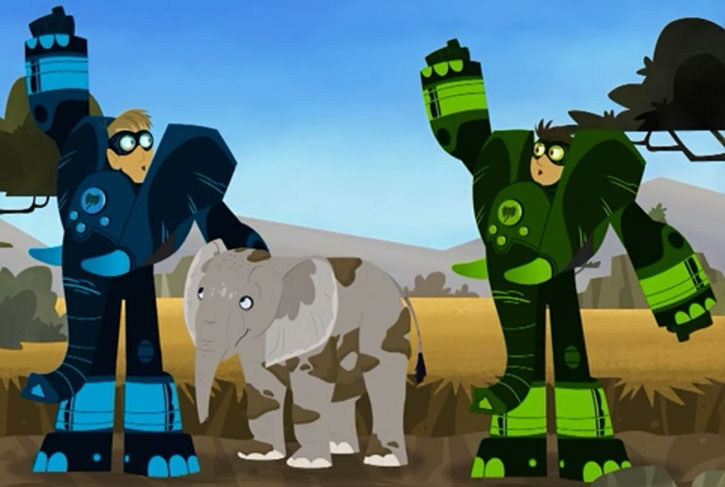 In some episodes Aviva builds the suit as the story progresses. The Kratt brothers will get the suit but may have some aspect of the animal missing.

As mysteries about the animal are uncovered, Aviva is able to add the new abilities to the suit through attachments. These are simply power complications subplots and probably account for only 10 to 15% of the episodes.

Some episodes appear to be out of order in the season, for instance the Kratt brothers are shown wearing a walrus power suit in episode 7: Polar bears don’t dance. However, they don’t investigate the walrus until episode 13: Mystery of the weird looking walrus.

When the series begins we find the Kratt brothers and their team have already been on many adventures. The team at the Tortuga, their mobile base, are all on good terms and work cohesively. Chris and Martin Kratt are the leaders who are perpetually curious about the animal kingdom.

They normally begin an adventure by investigating something about an animal they encounter. The entire team puts their efforts toward solving the mystery. 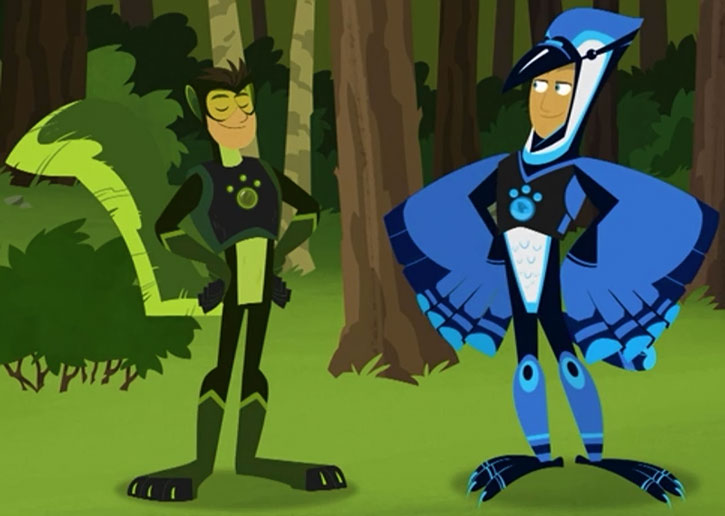 In the course of an episode The Kratts will overcome obstacles, be it environmental, other animals, or some reoccuring enemies who became constant nuisances. Donita Donata, the living animal fashion designer; Zachary Varmitech, a wealthy genius gadgeteer with robotic minions who wants to use animals for slave labor; and Gaston Gourmand, a chef who loves to cook rare and exotic animals.

Each episode ends with a joke and a laugh.

Chris has spiked dark brown hair. He wears a drab green overshirt with white undershirt. He compliments this with tan khaki shorts and purple boots. 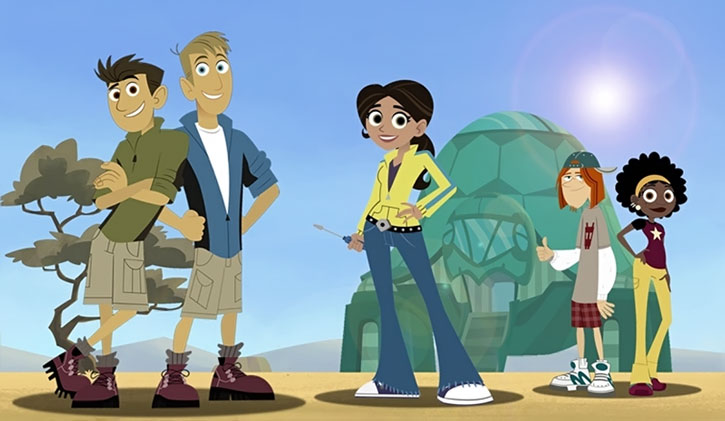 Martin is slightly taller with short blond hair. He wears the exact same outfit with the exception of the color of overshirt. It’s blue.

Martin, the jokester of the two, likes to give all the animals he meets cute, unique names. He’s often rushing and impulsive, a little disorganized, emotional and excited. He’s a bit silly at times but knows when to be serious.

He also likes to get into the mind of the animal, (“Be the walrus!”). Martin is fun and has a humorous nature.

Chris is the younger brother and the more methodical brother. He likes to take his time testing an animals’ powers to better understand the animals and save them from villains. Chris is organized, intellectual, and calm. Chris is an experienced climber. 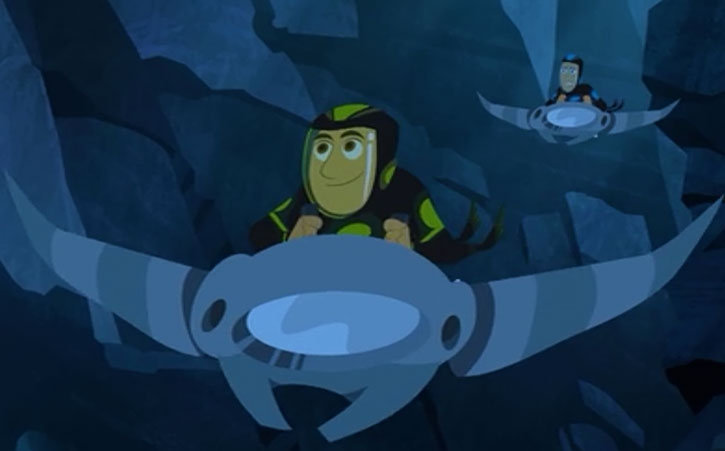 Like many animated characters, the Kratts wear their emotions on their face. They are always excited to get to do what they love; learn about animals! Once they become focused on learning about a creature they will not be detoured even by other animal mysteries.

The brothers are kind hearted and optimistic, they’re friendly to everyone they meet. When the duo is on the trail of a new mystery they have no problem jumping in a pool of mud to get the full experience.

Chis and Martin together: “What if !”

Martin: “Keep on creature adventuring !”
Chris: “And discovering there’s more to some creatures than you might think.” 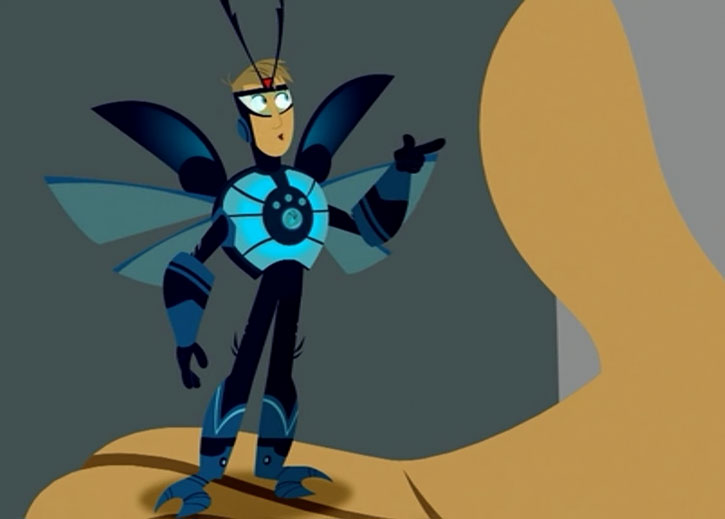 Chris: “Martin, are you squidding me ?”

Chris and Martin together: “De-activate.” (Both simultaneously press the button and their suits return to their normal states)

Martin and Chris together: “Living free and in the wild !”

Martin: “Keep on learning about creatures and we’ll see you on the creature trail.”

In the Marvel or DC Universes, I’d bring the team into a less innocent world. I see the team with Aviva being a distant relative to Dr. Pym or the Atom. These would be her link to the shrinking power the Kratts use so often.

Chris and Martin would downplay their adventures with animals as background or off-screen thrills for them. They would be crime-fighters, using their transforming animal costumes to greatest effect. In this version of the Kratts Aviva may work to remove the limitation that they must make physical contact with an animal making them more versatile. 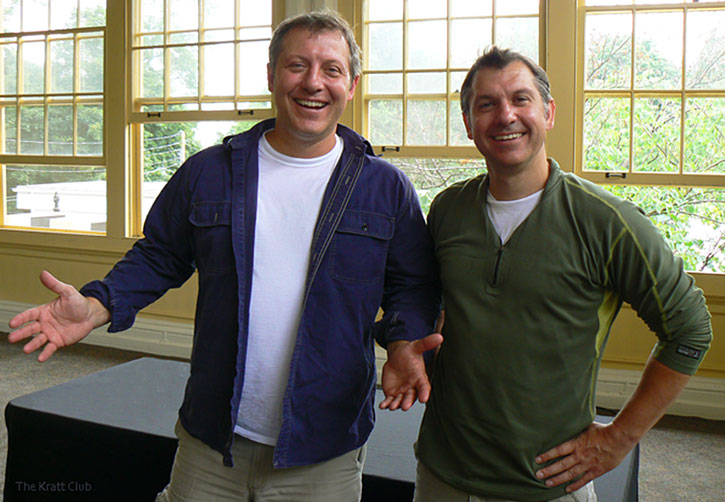 The Tortuga is a giant mobile lab shaped like a giant turtle. It’s piloted by the young pizza munching Jimmy Z. Computer upkeep, repair and communications administration are handled by Koki.

Aviva C. is an incredible super-genius gadgeteer who supplies the Kratt brothers with their incredible Creature Suits. She can whip up some pretty impressive gadgets in short order during an episode.

These have included a Hippo-Submarine, Amphi-sub, Hover-cycle, Butterflyer XT, Buzz Bikes, Manta riders, Octopod and are represented by an Omni-vehicle in Equipment, one per adventure. The Kratt brothers have had some normal vehicles as well including jeeps and boats. These have the normal stats for those vehicles. The Tortuga houses many cool gadgets including a teleportation tube.

There is really no way to gauge the Kratt’s Wealth stat. The Tortuga team can get pretty much anything they need. Money is never mentioned in any capacity whatsoever. If a GM must have a Wealth stat give the Kratt brother’s an individual Wealth stat of 07. While the Tortuga Team would have Wealth 15. 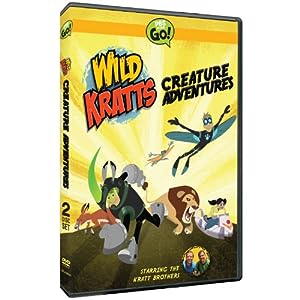 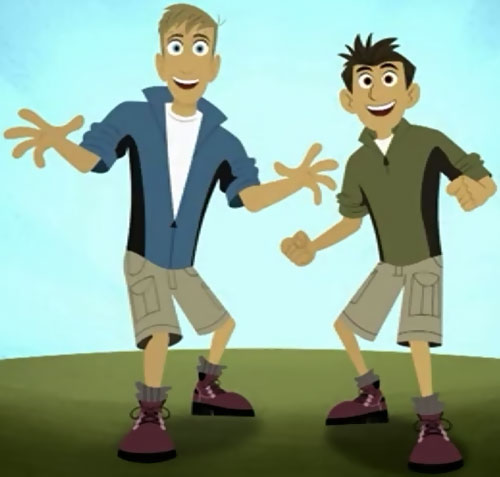 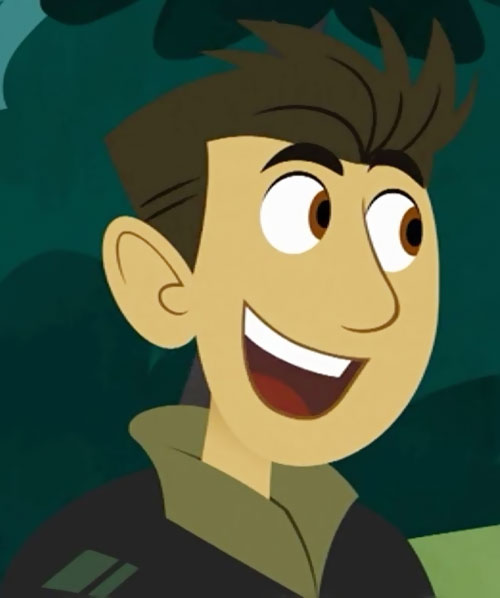 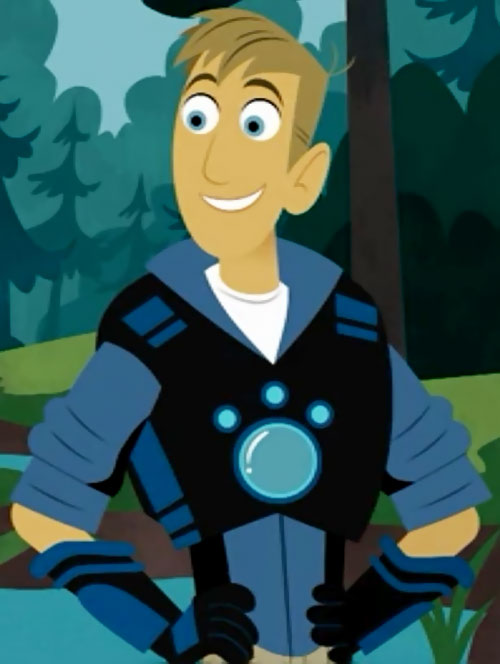 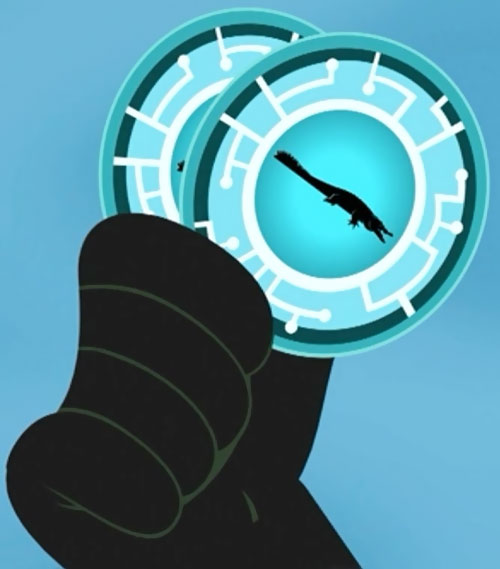 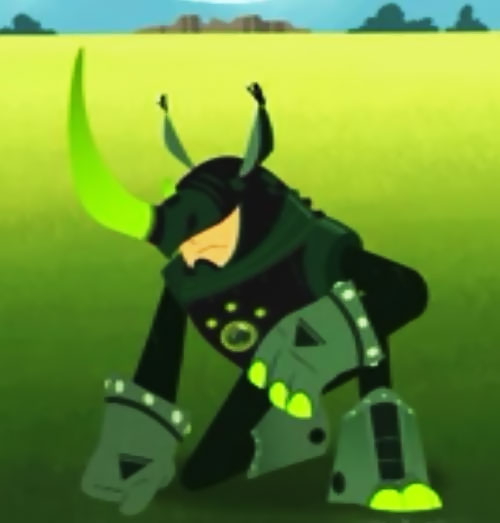