This character first appeared in a 1988 Punisher story, and returned in a few early 1990s Punisher tales.

Rose is a military intelligence badass. She’s trained in commando techniques, intelligence, manipulation, stealth, computer warfare and the like.

She is a particularly driven, calm and courageous agent.

In typical Mossad fashion, it is likely that nearly everything “Rose Kugel” said was misdirection.

She once said that she was actually a Palestinian from a refugee camp, making “Rose Kugel” an unlikely name. But both the name and the Palestinian origins maybe be partially or entirely false. She also told the Punisher that her own family had been killed in a terrorist bombing when she was 16. Which is both a little too convenient and far from impossible.

Rose teamed up with the Punisher three times so far.

Let the Punisher fit the Kugel

When they met, she spotted him while tracking a terrorist in the US. Rose then tracked the Punisher to one of his safe houses. She broke into the safe house to research him and his computers while he was away.

When the Punisher returned, she offered him an alliance. He eventually agreed. Together they thwarted an attempt at detonating a dirty nuclear weapon in Philadelphia. However, Rose was believed dead at the conclusion of that clash, as she had been thrown from a crane.

During their next encounter, they nearly clashed. The Punisher had killed a Mossad agent attempting to assassinate an engineer. Said technologist was selling plans to build the world’s biggest artillery piece.

(This is an allusion to real-world Gerald Bull .)

The Punisher was taken prisoner. He found that Rose was also held prisoner at the artillery site. Not only did she resent the Punisher for killing a man she knew, but she also had an alliance of convenience with the Saracen. He was a well-known mercenary and terrorist for whom the Punisher felt great hatred.

They ultimately avoided conflict, and destroyed both the cannon and the despot operating it. Coming to understand the Mossad’s point of view, the Punisher eventually killed the artillery engineer.

Rose, pretending to be a prostitute, later infiltrated a sort of convention for terrorists. It was held in the depths of the world’s most inhospitable desert. She met the Punisher, who had also come top the place disguised as the since-deceased Saracen.

They worked together in destroying the place, an endeavour made even more tense by a constant, hungry romantic tension between them. They did end up having sex because heh, screw it. So to speak.

It is unclear how much of this attraction was genuine and how much was manipulation by Rose. But they agreed to split paths. Their banter about living together was obviously just fantasy and they had other obligations.

Rose was depicted as a smoker during her first appearance, but has not been seen lighting up since.

Rose is an extremely pragmatic professional, with great courage and resolve.

The Punisher has nicknamed her “Wild Rose” since like many Israelis she is self-assured and direct, even blunt. She looks people straight in the eyes and tell it like it is. She is particularly open about whom she says she is, and about what she says her feelings are.

(To the Punisher) “I traced you back here, waited until you left and entered. I came in through the basement, by the way. Drilled a hole from the sewer. Don’t look so dismayed.”

“Federal agents. Come with us, please.”

I could see her having worked along with Deathstroke the Terminator several times.

Connections:
Punisher (High, provided she can contact him), Mossad (High).

Rose had the Attractive Advantage toward the Punisher, and people with similar tastes in women. But she doesn’t seem to have it in general. 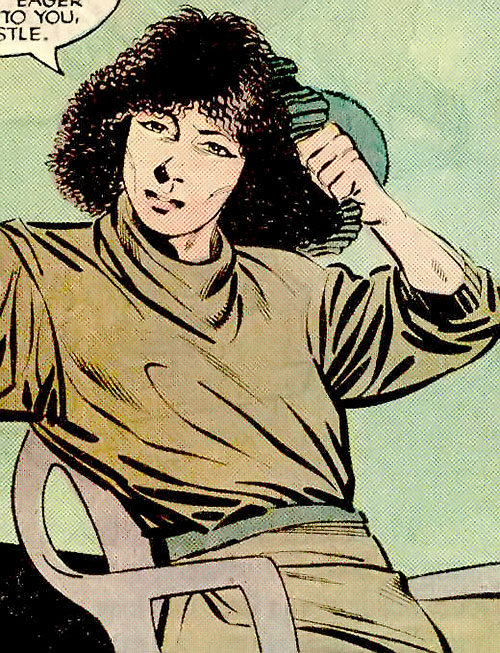