Wildfire is a coruscating ball of anti-energy in his natural form, intangible and invisible to the naked eye. Only when he is occupying his specially-designed Containment Suit does he have human form, the ability to speak and to interact with the world in any way other than to destroy things. 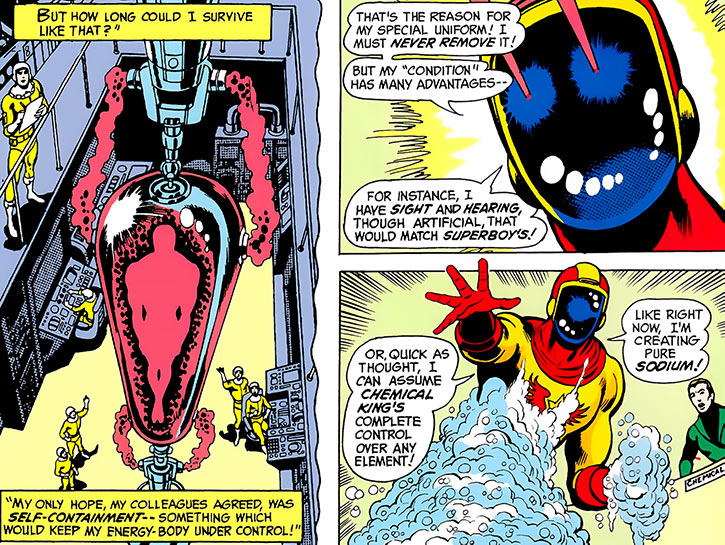 Bolstered by his Containment Suit, Wildfire has a greater degree of control over his anti-energy. He becomes able to project precise blasts – from minor pinpricks of force to all-consuming maelstroms of destruction that can wipe out anything this side of Inertron.

His Containment Suits sometimes seem to have widely variable abilities, and none as inherently powerful as his original, which allowed him to mimic many of his then-current Legion teammate’s powers.

Drake Burroughs was an ordinary student at Metropolis university when an accident occurred on a new propulsion system being developed in a research lab. The accident transformed him into a bizarre form of living anti-energy.

The energy was captured in a specialized containment suit, constructed by Professor Vultan, which essentially allowed Drake a kind of limited humanoid life powered by his own energy.

In addition, he found he could use his energy to project devastating bolts of destructive force. The suit also allowed him to mimic certain other powers. 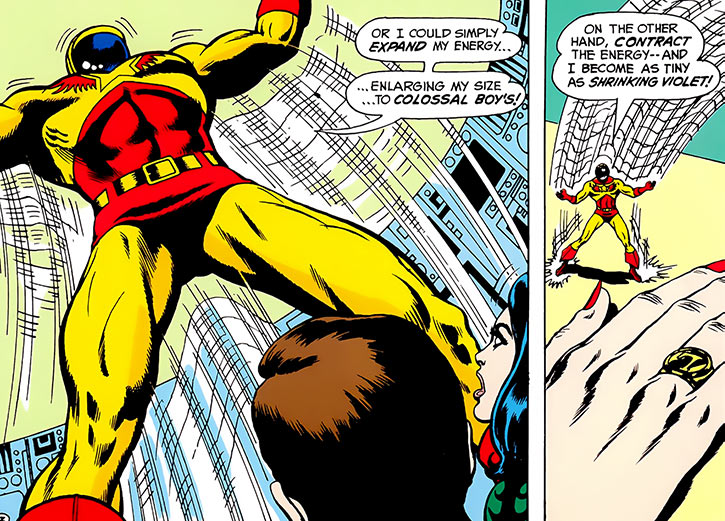 Applying to the Legion for membership in an attempt to add meaning to a now-stunted life, ERG-1, as he chose to be known (after the appellation of the Containment Suit), was rejected. His mimicked powers were redundant and he could only effectively demonstrate his Energy Release powers at the cost of leaving his suit, which he believed would end his artificial life.

Following a Legion mission to Manna 5, he unleashed his blasts against a devouring machine. This saved Colossal Boy and proving his worth, but also dissipated his energy, so that he could not re-enter the suit.

It took ERG-1 a year to return to Earth outside of his suit, as he had no prior experience in reassembling his energy form. He then penetrated Legion H.Q. to reclaim the suit and his existence. In doing so he saved the Legion from the android Molecular Master, who had been dispatched to steal the Miracle Machine.

Relying on his energy release power, now far more controlled, he joined the Legion as Wildfire.

Wildfire has been involved with the Legion Academy since joining. He devotes substantial time to working with the recruits. In particular, Dawnstar became his proteg´e, and they have had a relationship somewhere between a Platonic friendship and a steamy romance for some time.

Wildfire served as the tenth Legion leader. It was a particularly tumultuous term that included the Earthwars and the onset of Brainiac 5’s insanity.

Wildfire is an abrasive, sarcastic personality. Somewhat harshly blunt at times, his words rarely indicate what he truly feels.

Though he seems to have a strong will and an effective, dominating personality, it is very telling that he receives little sympathy from his teammates for his condition. He seems to have few friends and no confidants other than Dawnstar, but agonizes over what could be if he had a human body. 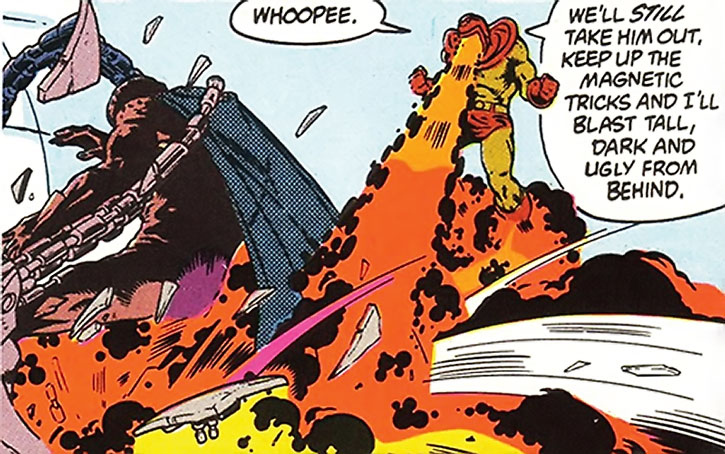 Although sometimes he seems like a brash hothead, Wildfire is actually a highly effective tactician. He thus often leads whatever team he is assigned to. Wildfire is an effective communicator and leader, especially of the rookies on the team, and the groups of Academy students he deals with.

Wildfire is the permanent Head of the Membership committee. As such he’s responsible for recruiting new members, and overseeing training at the Legion Academy.

(Using his Powers to act as an improvised starships’ engine) “Everybody comfy back there…? If not, I don’t wanna hear about it.”

(Referring to Darkseid) “What counts is, we made him turn tail and RUN ! WAHOO !”

In the current DCU, this version of Wildfire could only show up through Hyper-time. However, there were other ways to fit the original 30th century into the post-Crisis DCU without a pre-boot. And I don’t mean using a pocket universe, either.

Probably the best solution is to use some ideas from the Superman animated series to preserve contact between Superman, Supergirl, and the Legion. Have the LSH meet a teenage Clark Kent, as in “New Kids in Town,” and have them later invite him to the 30th century to become an honorary Legionnaire, as Superboy.

Thus, while Kal-El never had a 20th century career as Superboy, he did have one in the 30th century. It would have been brief and sporadic, though, and would also have been blocked from conscious recall by Saturn Girl. Supergirl would have been a more active member, thus basically swapping the historical roles Superboy and Supergirl played in the Legion.

With that in place, the Legion’s pre-Crisis history can be mostly intact, with the caveat always in place that inconsistencies are due to imaginary stories or chronicler’s errors.

Wildfire’s Containment Suit has a nearly constant ongoing Power Complication subplot. Wildfire’s containment suits are manufactured by Brainiac Five, and according to Wildfire, no two work precisely the same, resulting in variable Powers, and none are as good as Professor Vultan’s original.

The exact abilities of the different suits may vary by up to 3 AP’s in any Ability or Power. (Example: His Str may be higher, or his Body, but at the cost of trading AP’s from Force Manipulation via Power Reserve)

VULTAN’s CONTAINMENT SUIT: [/DEX/ 09 /STR/ 18 /BODY/ 16, Omni-Power: 12, Force Manipulation: 10, HP Cost: 993 ; Bonus/Limitations: Omni Power can Only be used to Mimic Powers that can be explained by Wildfire manipulating his Energy Body, and is Catastrophically Marginal, Force Manipulation is Seriously Marginal ; Advantages – Use of the Containment Suit negates the Disadvantage of Having no physical form, Intangibility does not function while Wildfire is in the suit ; Drawbacks – Use of Energy Blast over the Suit’s Body results in a Physical Attack of Full AP’s against the suit. For this reason, Wildfire may sometimes choose to leave his suit if he needs to use his Energy Blast at Higher than 16 AP’s. While in the Suit, Wildfire uses his Dex as AV for Energy Blast attacks, as opposed to Outside the Suit, where he uses AP’s of Energy Blast as AV]

There is a further restriction on the Marginal Power that Wildfire must have the Vultan suit on hand and switch suits in order to use it. This gives GM’s some ability to restrict its use.

At one point, fairly late in Series 3, with the help of fellow Legionnaire Quislet, Wildfire managed to coalesce his anti-Energy sufficiently to create a humanoid body for himself. This Body seemed to have the same general abilities, except that it did not have Intangibility. His Energy Blast (SL) was exchanged for Flame Being: 01.

Theoretically his new body also had the Omni-Power available via the Vultan suit, as he used Flash: 12 during the Escape attempt on Labyrinth. With Quislet’s departure for his own home dimension, Wildfire’s body de-constructed, and he was trapped in his original Energy form again.

Rewrote the basic suit and made stats for the Professor Vultan version of the suit… hopefully the mechanic for the fluctuating abilities works better.

Since Wildfire disappeared for much of the “Five-year Gap” in Legion History, we have lost the ability to ascertain whether he is Unaging… If you decide he is, the Immortal Advantage should be added. 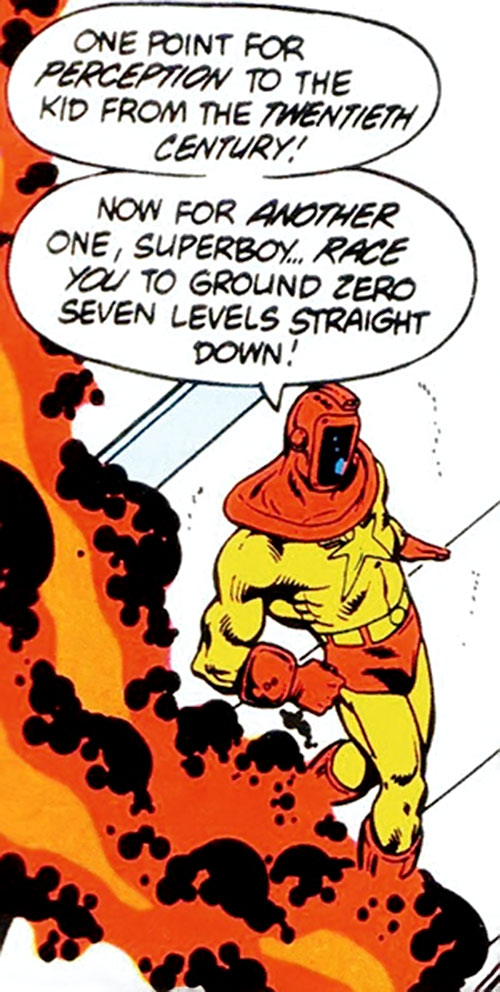 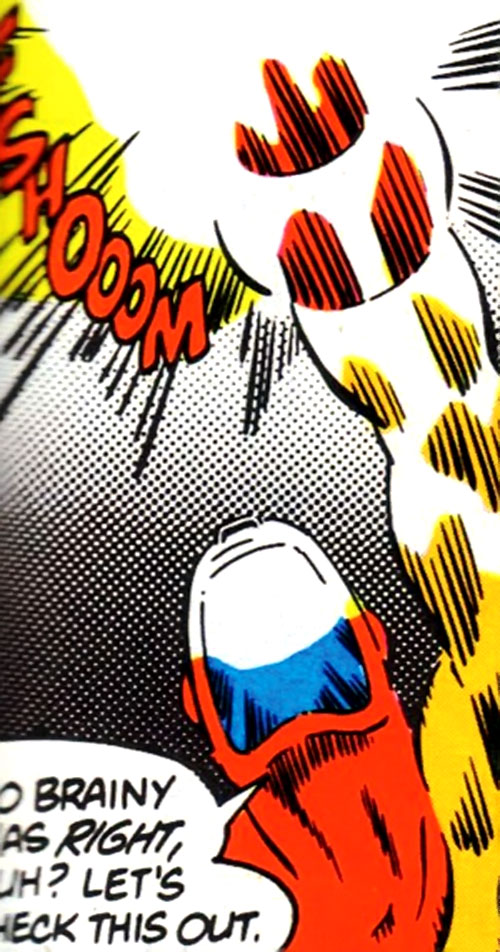 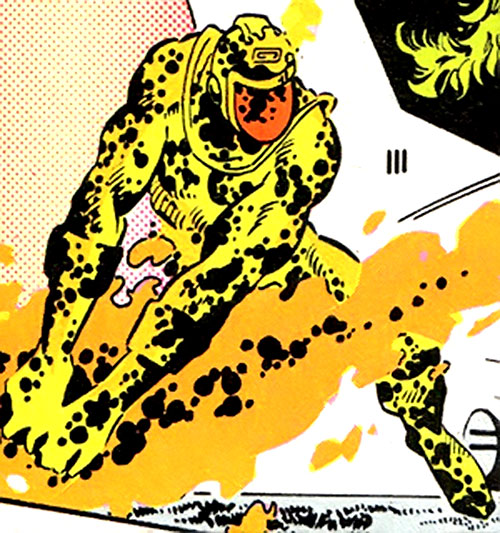 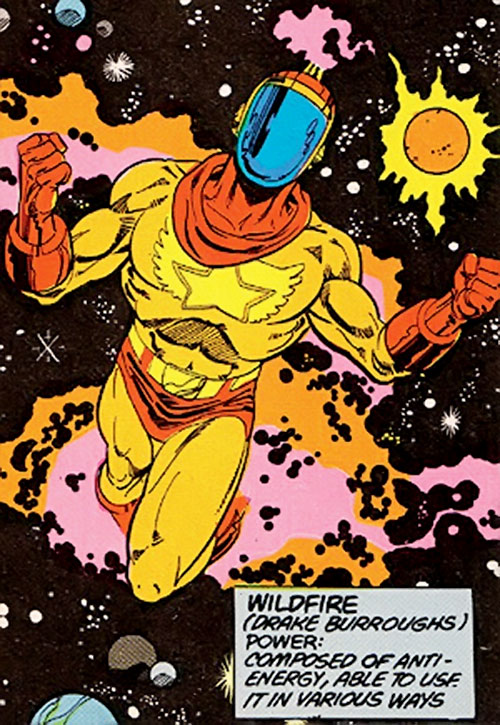 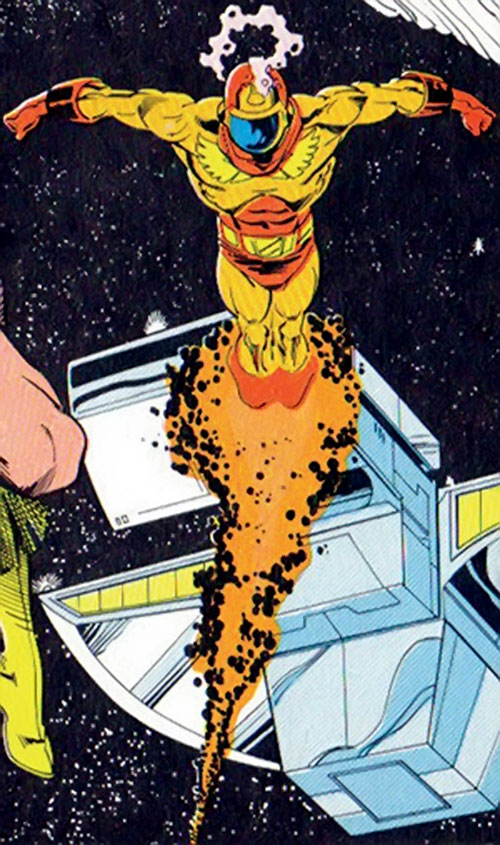 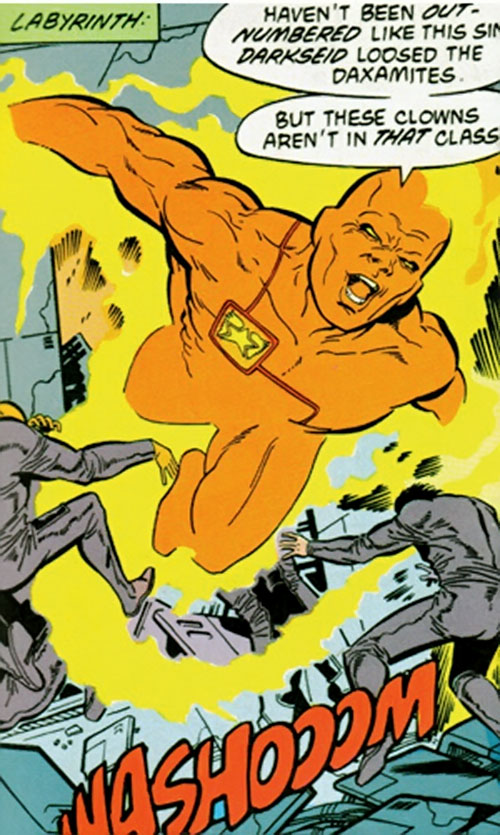