Willougby Kipling is a member (not exactly in good standing) of one of the last remnants of the Knights Templar. This secret group of sorcerers keep watch for occult threats to humanity, and occasionally send their members to confront these threats.

Kipling, as one of the least popular members, is often assigned the most unpleasant and dangerous missions. This is how he met the Doom Patrol.

The Cult of the Unwritten Book

The first time he met the Doom Patrol, Kipling was trying to stop the Cult of the Unwritten Book from summoning the Anti-God to “decreate” the Universe.

They were unable to stop the arrival of the Anti-God. But with the help of Crazy Jane’s Lucy Fugue personality, they did manage to slow down the “decreation” process to an almost imperceptible level. Thus, life continues as normal, although small things (ballpoint pens, for example) sometimes disappear without a trace.

Later, when Dorothy Spinner accidentally unleashed the Candlemaker, Kipling helped destroy the being. He first trapped it in Manhattan and later exposed it to Rebis’ new energy form, rendering it helpless.

Kipling also helped the Doom Patrol by downloading Cliff Steele’s consciousness back into his robot body and (for better or worse) putting Niles Caulder’s severed head into a cryonic suspension chamber.

When last seen, Kipling claimed to be “retired” and referred world-saving jobs to the Doom Patrol.

Kipling is a slender British man of around 40. He usually wears a trenchcoat and is almost never seen without a cigarette, a whiskey bottle, or both.

Willoughby Kipling is an utter bastard. He’s an ill-tempered, foul-mouthed, bullying coward. His first reaction to any impending crisis is to get drunk.

Confronted with physical (as opposed to magical or mystical) danger, Kipling is useless. He’ll beg, cower, cry, hide behind the nearest superhero and generally comport himself in a shameful and embarrassing manner.

Within his area of expertise (bizarre cults, especially those trying to bring about the end of the world), he’s arrogant and condescending, ordering people around and rarely listening to suggestions from anyone he considers less knowledgeable than himself (which is basically everyone).

Still and all, he HAS saved the universe twice.

“I’m very big in the world of international strangeness, as a matter of fact.” [lifting bottle to drink] “Chin chin.”

Advantages:
Scholar (Computers, Strange Cults, The End of the World). 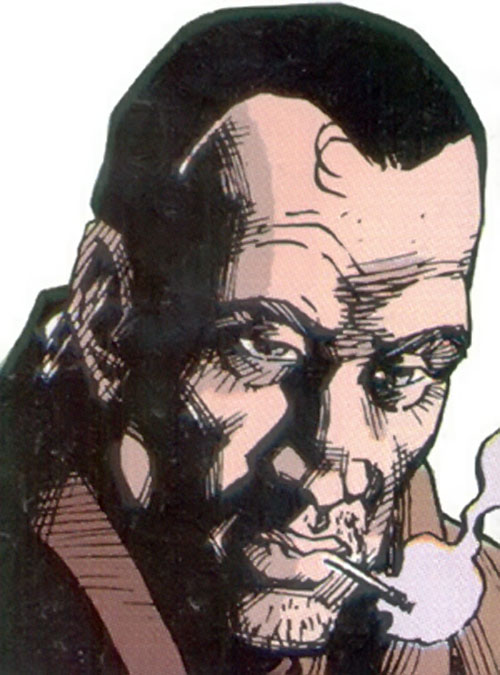