“A world where heroes come in all sizes and adventure is the greatest magic of all.”

Willow is the unlikely hero of the 1988 fantasy/adventure movie Willow. This film was quite popular (especially abroad). It is often considered a classic geeky movie (even including the mandatory mixed reviews by Serious Critics Of That Time).

It also came during a decade where the list of notable fantasy adventure movies was likely shorter than your groceries list. Which enhanced said geek cred.

The movie’s titular hero is an apprentice magician. And a Nelwyn, which is something like a Hobbit or Halfling.

Willow was played by a young Warwick Davis. This was his breakout role after having played one of the notable Ewoks in Return of the Jedi. Mr. Davis also played the evil leprechaun in a series of horror comedies.

This profile has many S P O I L E R S about this beloved movie.

Willow is a family man and a farmer.

He’s also a student of magic. First as a stage magician, but later on with real magic. When he went on his adventure, Willow was given three magic acorns and a magic wand.

Willow knows he’s small even for a Nelwyn, and he’s no warrior. But when forced to fight, Willow holds nothing back. He’s seen using a hammer, a sword, and a spear. He carries a knife on his belt too. 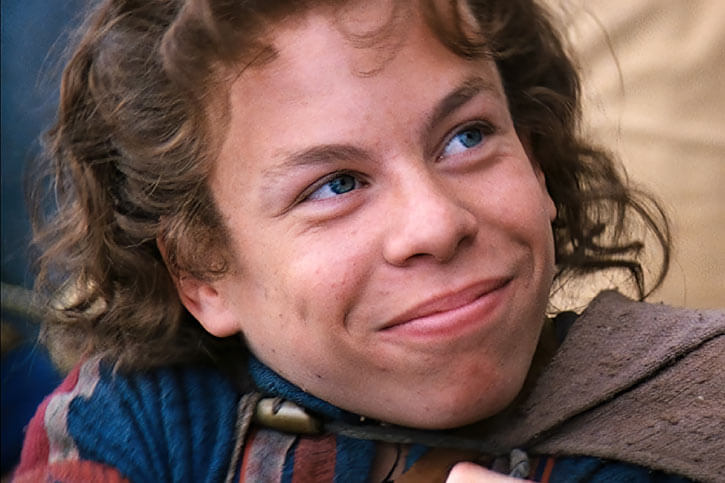 Here’s the trailer for the Blu-Ray release, so we can have the proper HD footage and not the peck version.

It’s a time of dread… Seers have foretold the birth of a child who would bring about the downfall of the powerful Witch-Queen Bavmorda. Seizing all pregnant women in the realm, the evil Queen vows to destroy the child when it is born…

Soon, in Nockmaar Castle’s dungeons, a girl was born bearing the mark. Sorsha, Bavmorda’s daughter, verified the mark and went to tell her mother.

Knowing the child would be killed, Ethna the midwife took the baby in a basket and fled!

Ethna was lucky in her escape. She evaded capture for three or four months, living off the land and caring for the child.

Bavmorda sent her Death Dogs after her. These fast and powerful beasts have the traits of both rats and dogs. Eventually, the Death dogs overtook and mauled the midwife to death.

But not before she sent the child down the river in a makeshift raft, like Moses.

Willow Ufgood’s children found the child. Willow identified it as a Daikini (human) baby. He thought it would only bring trouble. But his wife, Kiaya, decided otherwise.

Burglekutt, a wealthy and grubby landowner, loudly accused Willow of stealing seeds. You see, Burglekutt had a monopoly on seeds for farming. Either you bought from him or you went to work in the mines. Willow’s family had gathered their own seeds since the fall in the forest.

The next day was the festival. Willow looked forward to a chance at becoming an apprentice sorcerer. Even though the High Aldwin hadn’t taken an apprentice in years.

At the choosing, the High Aldwin again turned away all hopefuls. Including Willow. 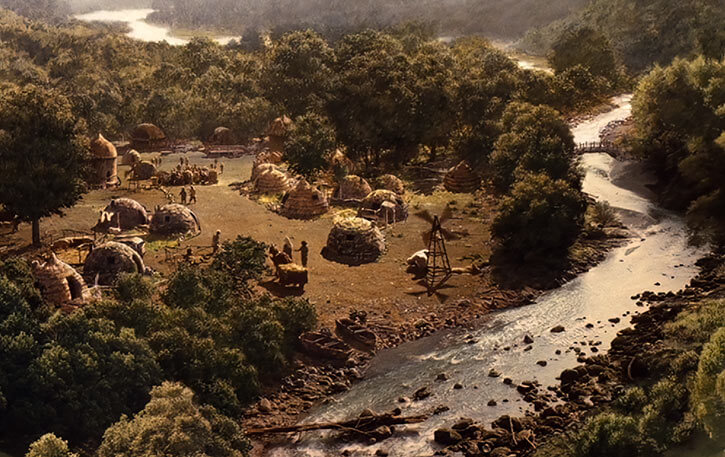 A death dog burst into the festival clearing. It charged forward and attacked a baby carriage. The Nelwyn warriors surrounded the beast and killed it.

The village council met to determine what this meant. Willow told the High Aldwin how he found the Daikini baby.

A group would need to take the baby away, find a Daikini to care for the child, and return to the village.

The road goes ever on

Willow carried the child. His best friend Meegosh, Burglekutt, and three Nelwyn warriors went to the Daikini crossroads. They would give the child to the first Daikini they saw. Problem solved!

With a war going on, the Nelwyns could hardly find anyone to care for the baby. They reluctantly gave her to a scoundrel named Madmartigan.

Only a little while later, Willow and Meegosh watched a hawk carrying a child fly overhead. A brownie was riding it calling out: “I stole the baby!”

They gave chase and wound up captured by the brownies. Cherlindrea, the fae Queen, spoke for Elora Danan, the child. She chose Willow as her guardian.

Willow’s task was to take Cherlindrea’s wand to the sorceress Raziel. Then journey to the kingdom of Tir Asleen where they would be safe.

The next morning, Willow sent Meegosh home. Two brownie scouts led him to the island where Bavmorda banished Fin Raziel. On the way, they met Madmartigan again. He accompanied them to the island before heading off on his own.

Willow went alone to the deserted island. Fin Raziel revealed herself, cursed by Bavmorda to live as a brush-tailed possum. Willow took her back to shore, but they were quickly captured.

Sorsha took them to a snowy mountain camp where she gave the child to General Kael.

Willow attempted to change Raziel back to human form but could only manage a crow.

The brownies arrived and picked the lock on their cage.

They also popped Madmartigan with a love potion. The dust of broken hearts. He saw Sorsha and fell in love with her.

They regained Elora and escaped down the mountainside, but not before Madmartigan left quite an impression on Sorsha.

General Kael’s army pursued them to a village. Airk Thaughbaer was hiding there with part of his army. They attacked Kael to give Madmartigan and Willow an escape. This time they took Sorsha as their captive and fled to Tir Asleen. 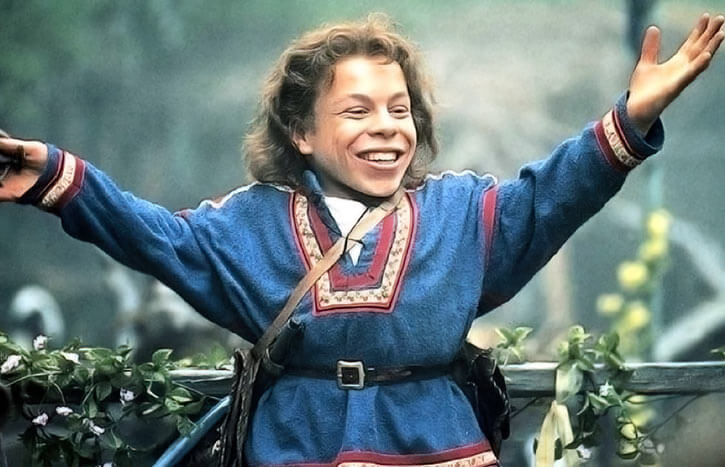 This way! As the crow flies! To Tir Asleen you fools!

Surprised, they found Tir Asleen’s population encased in stone. Instead of safety and an army, trolls roamed freely within its walls.

Genera Kael’s forces bore down on them. Madmartigan raided the armory and put up a one-man defense for the ages! Sorsha fell in love with his brave heroics and switched sides on the spot.

Airk’s men arrived in time to cut off Kael’s men from escaping. But Kael himself fled with Elora in hand. He took her straightway to Nockmaar Castle.

Airk’s army, close on Kael’s heels, sat up camp to begin a siege.

Bavmorda laughed from her parapetA protective wall.. Then, used her magic, to change them all to pigs. Willow used Cherlindrea’s wand to protect himself and Raziel.

Willow, with much effort, changed Raziel back to her human form. She then secretly undid Bavmorda’s spell over the army.

Willow came up with a plan. They dug holes all night. At dawn, Raziel and Willow challenged Bavmorda again.

General Kael took a contingent of men and rode out. The ambush worked and with the gates open, they also gained entrance to Nockmaar! They fought their way to the top of the high tower to confront Bavmorda and rescue Elora Danan! 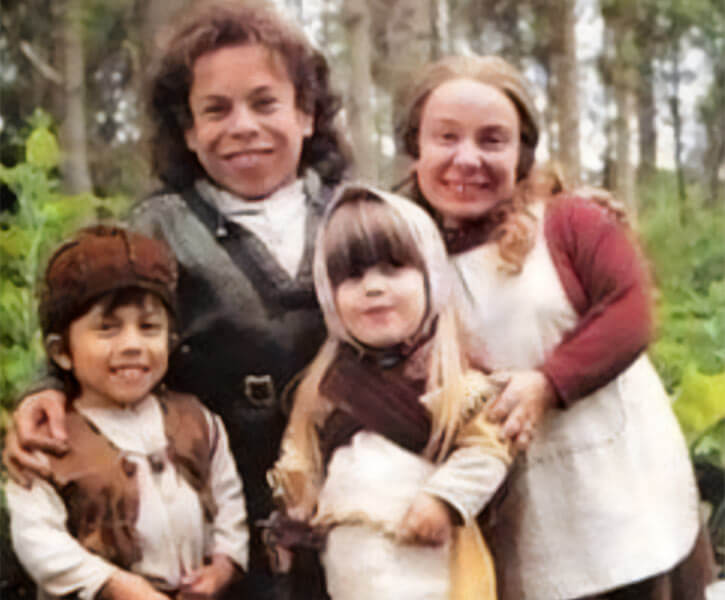 As a Nelwyn, Willow is a small humanoid.

His face beams with a lively full-of-life grin. He has long wavy hair

When adventuring, Willow wears a traveling cloak. A blue and red sorcerer’s overcoat, with a white shirt under that. Hard leather boots. His belt has a pouch on the left. A shoulder bag hangs on the other side.

To carry Elora Danan, Willow has a framed pack on his back.

Willow loves his family. He’s a responsible father and husband. Willow’s pet name for his children is “bobbins”.

When Elora Danan arrives on his doorstep, he wants to send her away or give her to someone else to deal with. Still, when it came down to it, he did what was required when no one else could.

A good protector, Willow is courageous and fights hard when necessary. He speaks his mind.

“And now for my final amazing feat. I will make this entire pig disappear.”

Ranon: “I can be your guard and carry your spear.”
Mims: “Me too. Me too, Dada.”
Willow: “What a lucky father I am. I wish I could take you bobbins with me.”

“You need a warrior for a job like this. I’m a nobody. Alora, you don’t want me.”

“I’m short even for a Nelwyn.”

Willow: “Back home in my village, we have a lot of gophers.”
Madmartigan: “Willow, this is war, not agriculture.”
Willow: “I know, I know. But I’ve an idea how to get inside the castle.”

The Nelwyn could come from the realm of Faerie as seen in the Books of Magic. Brownies exist there already.

Willow and his companions fit in any Dungeons and Dragons, sword- and-sorcery style adventure setting. 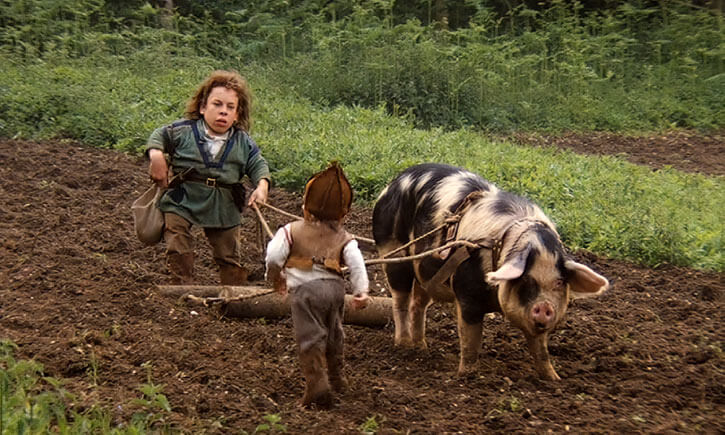 A 284 points Character (without Rituals and equipment).

Shrinking is Always On (+1), Form Function (-1) and Already Factored In.

Transformation spell
Effect: Transform: 06 (bird only)
Casting Time: Instant.
Components: 00 (Cost in APs).
Special Restrictions: Toss an object, like a stone into the air.
Comments: This Ritual was used by Willow and the High Aldwin.
Cost: 25

Shelter Chant
Effect: Obscure: 04, Bonuses and Limitations: Area Effect.
Casting Time: As long as chanting is maintained.
Components: 00 (Cost in APs).
Special Restrictions: None.
Comments: This Ritual was used to hide Willow and Fin Raziel from Bavmorda. It kept them from being targeted by her transformation magic.
Cost: 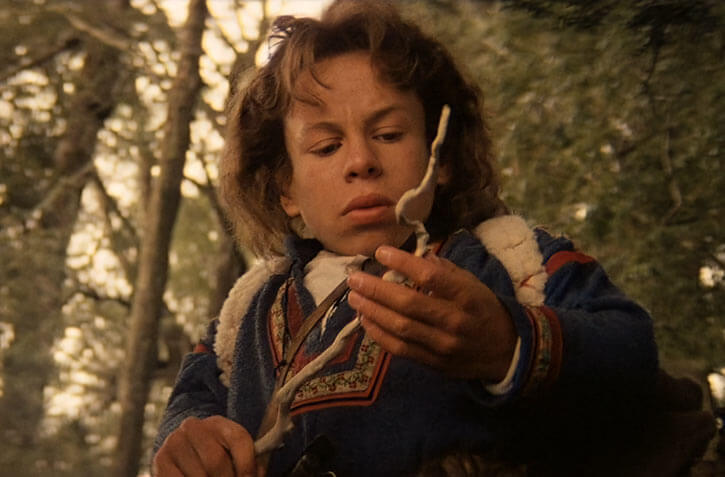 Willow doesn’t like to fight, but when he must he’s dumping Hero Points and making critical strikes. Willow is more adept with melee weapons than one would expect. I don’t think he’s trained at it, so, I’ve linked the Skill to his Dex to show that it’s his natural talent.

In one scene, Willow throws himself to the floor tripping a soldier, sending him sprawling. Mechanically, this can be accomplished with Planned Knockback. Which could send the target flying.

Combine Planned Knockback combined with Pulling a Punch, which is then limited to 00 APs of knockback. (Effectively just knockdown). You basically get a trip. Your GM may reduce the Column Shift Penalties by 1 since trip is a pretty common and straightforward effect.

At the end of the film, Willow proves he knows a bit of real magic. He repeats a trick the High Aldwin did early in the film. He throws an apple into the air and it becomes a dove.

Occultist is 03 at the end of the film, but 01 throughout.

Likewise, his AURA likely was lower at the beginning of the movie.

Wealth is a guess. 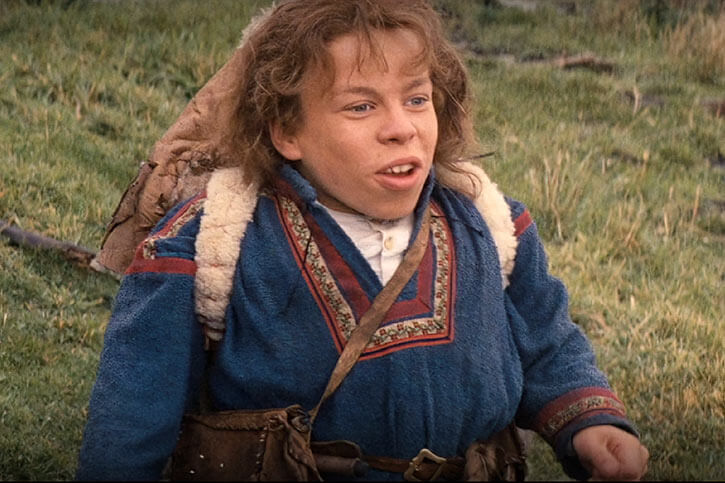 Willow sometimes recites a chant. But with the first try at transforming Raziel, Willow made a potion and put his own blood on the wand along with the chant.

Industrial Light & Magic achieved a break-through for early CGI in digital morphing technology in this film. Each animal was filmed. The images fed in and the program created a smooth transition from one stage to the other.

The name of Cherlindrea was taken from three people’s names: Cheryl (the wife of director Ron Howard), Linda Ronstadt  (a friend of George Lucas), and Andrea (the wife of screenwriter Bob Dolman).

“Warwick Davis explained that in a scene near the end of the film, he throws a second acorn and is inexplicably out after having only used two of the three Magic Acorns he had been given earlier in the film. Included in the Blu-ray release is the cut scene, in which Willow uses an acorn (his second) in a boat during a storm and accidentally turns the boat to stone. Davis says that his hair is wet in the next scene. That did make it into the original version of the film, but the acorn is never referenced.” – interview with The Empire Podcast

A TV series also titled Willow is still in the works as of this writing. Warwick Davis will reprise his role as Willow Ufgood.

Source of Character: The 1988 film Willow, played by Warwick Davis.

Writeup completed on the 9th of December, 2020.