In addition to the normal Morituri physical enhancements, the Wind was able to move at supersonic speeds.

Julio Gonzales was a serial killer who preyed on homeless people. He thought he was an Indian chief named Red Cougar on a mission to keep the broken people from filling up the world.

The conspiracy played on his fantasies and gave him power beyond his dreams. He was more than happy to kill for them, though he continued his homeless killings as well.

His first mission was to kill Revenge, which he failed to accomplish. His second was to invade the underground base where the Prime Minister was staying and kill her. This he accomplished with ease, killing everyone in his path. Then, however, instead of leaving, he stayed and began killing anyone he missed on his way in.

The Strikeforce caught up with him here and Revenge finally managed to kill him.

A medium-built Hispanic man, he wore green pants and a white, sleeveless chest protector. He wore furry bracers on his wrists and calves.

A complete psychotic, the Wind was a crazed killer who used his supposed mission as justification for the killing he so enjoyed.

“I have been put away. I have been stopped. Stopped from killing. Prevented from doing my work. So the world fills up with the broken people. The shuffling horde multiplies and there’s no one to stop them…” 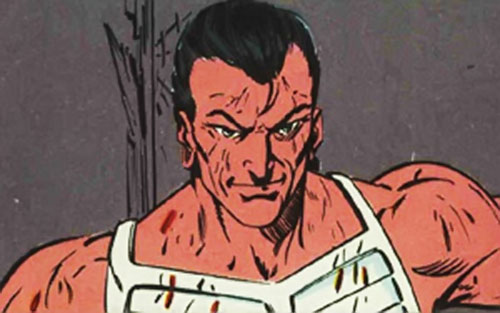