This type of robot, built by Doctor Doom, was seen in the 1992 Silver Sable and the Wild Pack comics series.

By themselves they’re not of major interest. But role-players often need stats for combat robots.

The winged knight robots are mostly an attack model, and an excellent reaction force. They fly fast, even inside the castle’s corridors, and have a powerful weapon system.

Like many comic book robots, though, they tend to either be unaffected by hits or be demolished by them. And of course their own weapons are deadly to them.

During the Infinity Whatever, Doom was briefly replaced by his alien doppelgänger . This happened just as Silver Sable came dining with him as part of the diplomatic relationship between their countries.

Silver Sable quickly realised the Doom she was facing wasn’t the Victor von Doom she knew. The impostor then had a nearby cadre of robots take her to the dungeon.

Silver Sable handily thrashed the robots and escaped. One managed to get away from her to warn the fake Doom, only to be destroyed by the irritated doppelgänger.

Standard robot, with electronic voice and all that jazz.

“Alert ! The prisoner is attempting escape !”

Advantages:
Area Knowledge (Castle Doom. This AK allows them to use their full Flight APs in the castle, even in confined space. The main use for this is to benefit from the OV of their Flight). 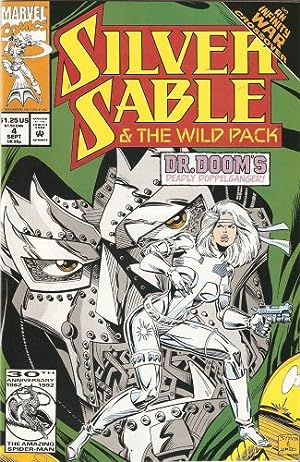