One of its quirks is that it’s full of characters who seem cool and interesting, but only appear for a brief time. Each issue is a single case, the cases often involve an ensemble cast, and few characters reoccur from one crisis to the next.

But since I love most issues, characters who do not objectively have enough material to justify a writeup still make the cut. Yet I hesitated even longer for Mr. Croft. Who’s not a combatant, and thus doesn’t even need a full stats block.

But heh, he’s cool. So whatev.

Winston Croft is essentially Los Angeles’ Sherlock Holmes. The sort of guy who walks into a room, examines some details, then deduces everything that happened in a five-mile radius since Clovis  ruled the Franks.

He is charming, calm, experienced and possesses a stupendous power of observation and deduction. He also seems familiar with criminals and gonifs  in the greater L.A. area.

Mr. Croft uses forensics equipment while detecting. His favourite is a flashlight that can shine along the entire spectrum, from ultraviolet to infrared. Given Croft’s experience, it allows for quickly finding minute clues.

Winston Croft is retired – he seems to be in his late 60s. He used to be a detective, either as a P.I. or with a Californian police department. It is implied that he helped — as a consulting detective, if you will — the Global Frequency on several occasions.

Aleph stated that Mr. Croft was the best detective the Frequency knew of. Given the extraordinary access that the Frequency has to talent, this could mean that he’s the best sleuth in the GF world. It is also possible that Aleph was buttering Croft up, but that seems unlikely.

Seconds later, an helicopter was on its way to pick Winston Croft up, since he was Aleph’s key talent for the mission. Albeit retired, Mr. Croft gracefully agreed to help.

Beyond the master detective, the following assets scrambled :

With the helicopter, Winston Croft was on the scene within 25 minutes of receiving the call. He started inspecting the hotel room whence Ms. Zero had disappeared. 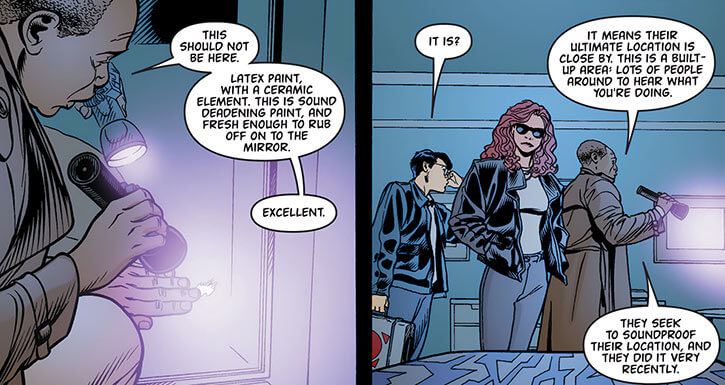 You know my methods, Aleph

He also found a trace of latex and ceramic paint on a mirror. This meant that one aggressor had been using soundproofing paint recently. This suggested that M. Zero was held in a densely populated area. And since the paint was fresh enough, the holding site was close by.

Genetic fingerprinter Mr. Musson came in with a portable lab. Meanwhile, Mr. Winston instructed the smart mob to scour surveillance footage for a tall workman in paint-soiled overalls and a thin man in an old suit.

From there, the swarm scoured video footage to trace where their van had been headed. They also tracked down where the paint had been bought.

Though it seemed that Mr. Croft had done his job, he remained with Mr. Musson.

The pair came in again 15 minutes later, as Aleph’s efforts had been stalling for several minutes. One of the suspects had an alias. It was not found in the databases Aleph was using at this point, but cross-referenceable using a tiny DNA sample Musson and Croft had analysed in the hotel room.

When I imagine Mr. Croft’s voice it sounds like Stanley Clarke’s bass guitar. Look, it’s a jazz fusion thing, okay ? You can’t judge that. I have rights.

An ageing but still spry African-American gentleman, with lighter skin (about a 26 on the von Luschan scale , for those millions of dermatologists who read writeups.org) and a manifestly receding hairline.

Winston Croft is a gentleman, a goal-focused deductive genius, and a hardboiled detective. He has a slightly sarcastic, almost impish — but subtle and amusing — sense of humour.

He seemed glad to work again – which may be in part because this would save Miranda Zero’s life. Many of the best Global Frequency agents seem to have a personal debt toward Ms. Zero.

One panel gives the impression that he was alone in his house yet surrounded by portraits of his family. Perhaps he retired after tragic familial losses, and was nearing the end of his grief when Aleph called.

He addresses most people as “young man” or “young lady”.

Mr. Tran: “What is that ? I love gadgets.”
Mr. Croft: “A forensics light source. […] It enhances the visualisation of trace evidence. Also useful for tracking slugs in my garden.”

Aleph (angrily): “Damnit !! We are so BLOWING this !”
W. Croft (calmly): “No, we are not, young lady. Computers are idiots, and only repeat what they are told.” (beat) “The genetic typing is speaking to another database entirely. And it is telling us that your ‘Aggerholm’ has also answered to the less colourful ‘Joseph Arthur Dobbs’.” 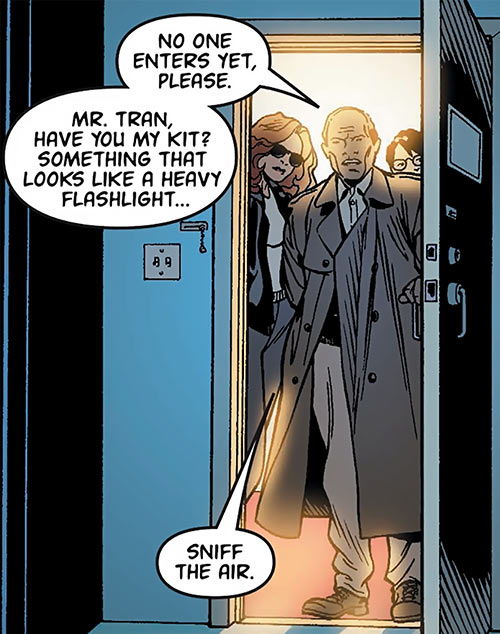