Winter is one of the more notable characters to have emerged from StormWatch. StormWatch was one of the early titles from Image Comics – generic super-hero fare of so-so quality. However, the series would eventually evolve toward something much more interesting.

Like with many of our StormWatch notes, these notes date back from the late 1990s — the evolution mentioned above. As such they’re clearly not as polished as our latter material.

Winter is a well-trained, experienced killer and special forces soldier. He can successfully execute missions in the most hostile conditions.

He’s also an energy absorber and re-channeller. He can even absorb kinetic energy such as punches. The energy he emits is “negative energy” – whatever that means.

Even when he’s not visibly absorbing energy he’s able to fly and deliver energy blasts. This is done by absorbing ambient energy such as the Earth’s rotation.

Nikolas Kamarov grew up in the frigid wastes of Siberia. He was the son of a test pilot and an aristocrat. There is a *possibility* that his real mother is Zealot, thus explaining his powers.

As a youth, he was a remarkable athlete. He excelled, among others, in long-distance running and sambo wrestling. Kamarov even serveda member of the USSR Olympic team.

But after discovering how the rest of the world lived, his regard for the State turned to resentment. His attempt to defect failed, and he was judged. He chose to join the Army rather than be imprisoned.

(The events happen during the decline of the Soviet Union, but years before the fall of the Berlin Wall.)

Even more so than in sports, he found his real calling in the Speztnaz special forces units. Kamarov became one of their very best soldiers. He was teamed up with another crack commando, and their two-man team was given the most difficult missions.

They were top-notch killers, until Kamarov’s comrade was denounced as a traitor. The renegade became M.A.D.-1, wearing a powerful suit of power armor . Kamarov was ordered to kill his former partner, but the armour made that impossible. His former comrade spared him, showing more pity than Nikolas ever had.

Kamarov spend years in an hospital, thinking about the fact he had tried to kill his field partner. He was also haunted by the ghosts of his innumerable victims.

Meanwhile, StormWatch gained access to his medical records. They determined that he was a Seedling , and offered him to join as the USSR was crumbling apart.

Nikolas finally left the USSR. He felt that there was nothing left for him there except the Army. He ended up in StormWatch, where Synergy activated his powers.

He’s been a member for years. Winter played an integral part in the team since day one, and eventually became the leader of StormWatch Prime.

StormWatch Prime is a tactical team devoted to dealing with superhuman threats in hotwar situations. Working for the UN, it is composed of Winter, Fuji and Hellstrike. But Winter has authority to lead all StormWatch field teams, not just Prime.

Though they are heroes, StormWatch operatives at that point actually worked for the Special Security Council. This was a ruthless, secret cabinet of multi-billionaires secretly controlling the UN. The SSC did not hesitate to violate the rights of a country to advance its agenda.

In 1998, StormWatch’s Skywatch satellite base attempted to blow off-course an incoming celestial body. The operation was a success, but resulted in Skywatch being unexpectedly boarded by hundreds of space aliens. Though the Earth was now safe from an impact, letting these xenomorphs reach the planet would be a global disaster.

Winter heroically sacrificed himself to fly the spaceship toward the sun. This destroyed all the aliens and saving the Earth.

Winter is in his late 30s, with grey eyes and long white hair worn in a queue.

He wears a black featureless skintight jumpsuit leaving only his head bare. Over the jumpsuit are a pair of motorcycle boots and some kind of cool-looking skintight blue-grey leather jacket. He also wears steel gauntlets, cladding his palm and fingers in a metallic mesh.

Winter has been through a lot, and as a result he’s been known to have somewhat depressive periods. His vision of the world is dark and fatalistic, but he has more apparent fire left than Jenny Sparks.

He’s still a soldier at heart, although he’s very philosophical about it. Winter is really good at fighting and, if need be, killing.

Being a Russian character in a comic book, he can be somewhat romantic (in the original sense of the term ) at times.

After some discussion with Sean and Jim, an interesting possibility would be that the Guardians only existed in the 1970’s. StormWatch is a newer incarnation of that team, replacing the JLI as the UN-sponsored team. 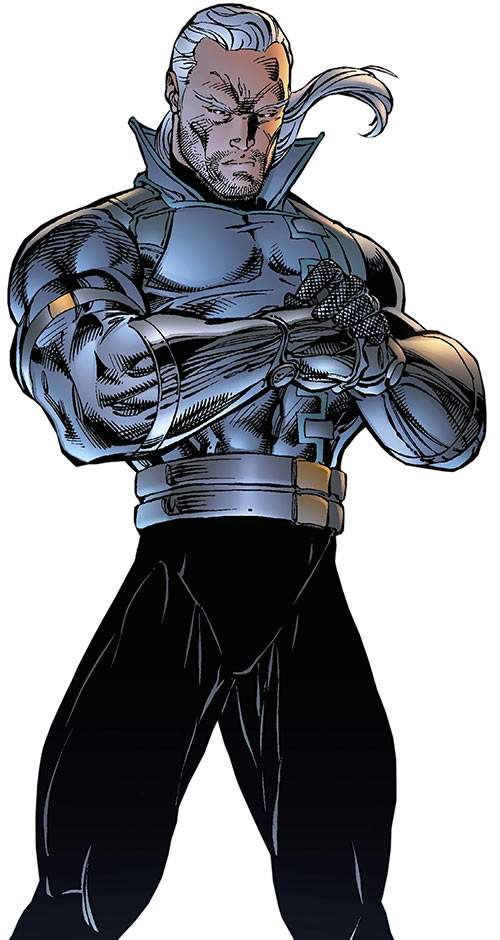