Wishbringer was in the same genre, but was written to be more accessible to people who weren’t die-hard 1980s nerds. Everybody back then thought that it was amazing and it sold like gangbusters.

There even was a novelisation (see our Amazon recommendation).

Of the Seven Wishes, and what ye must know to invoke them.

Seven is the number of the Wishes bound into the Stone; and if ye speak a Wish, that wish is Spent, and lost forever. Also know, that ye must hold the Wishing-Stone within thy hands to wield its Magick. Look ye, then, upon the Seven Wishes:

A Moral History, in Verse, of the Magick Dream-Stone

Of Morning-Star’s birth and great beauty and how she was abducted by the envious Queen Alexis.

It happened in the reign of mighty Anatinus, King of Misty Island, that there was born into a peasant home a daughter, blessed with rare and perfect Beauty. Morning-Star they named her; and the legend of her beauty spread through all the kingdom, even to the court of Anatinus.

There beside the throne sat Queen Alexis, heavy-hearted. For her newborn daughter, cursed by fate and prophecy, was sightless. Loth the Queen to look upon her blind child’s face! And how the baby Morning-Star more beautiful and perfect, made her jealous! Envy breedeth Evil: Queen Alexis caused the simple peasant home of Morning-Star to burn.

The sleeping family perished, all but Morning-Star, who, being rescued by the Queen’s design, became her daughter, sight restored by Prayer. (The one true Princess, left behind to fill the vacant cradle, perished too, and never saw her mother.)

Of Morning-Star’s coming of age, and of the many knights who sought her fair hand in Marriage.

The years were kind to Morning-Star. Her beauty blossomed like the fragrant water-lily into full, abundant maidenhood. Anon befell her ten-and-seventh birthday. Anatinus made it known that whosoever might desire to win the hand of Morning-Star, should now come forth to claim it.

To prove his worth, the groom must first by needs fulfill a Love-Quest, of the Queen’s own choosing, according to the custom of the kingdom. Many were the eager knights who journeyed to the royal palace, hoping there to win the love of Princess Morning-Star. Alexis, dark with envy, watched the lusty swains descend like vultures ’round her daughter, and vowed in secret not to let them have her.

From the knights assembled, Six were chosen, and stood before the heartless Queen for testing.

Of the impossible Love-Quests devised by the crafty queen Alexis, and how the six knights fared by them.

One brave knight, a lad but one-and-twenty, was sent across the sea to beg Lord Nimbus, God of Rain, to quench the thirsting fields of Frotzen. But the God, not sympathetic, smote his vessel with a bolt of lightning.

The second knight, a weapons-bearer, strong of limb and spirit, scaled the mountain peak of Matter-Horn, to seek Advice from spirits. The hopes of Princess Morning-Star fell with him. A third knight ventured forth to try the fabled Wings of Icarus, and learn the secret method of their Flight, to please Alexis. But alas! the joyful knight, whilst soaring home to claim the Princess, flew into the open maw of Thermofax, a Dragon.

Alexis sent the fourth knight deep into the Mines of Mendon, there to slay a Grue, and drag the carcass up where all might see it. But Darkness overcame the hapless knight, who, lost without a lamp, was soon Devoured. Another knight, the fifth, directed by the Queen to steal the Cocoa-Nut of Quendor, chanced upon a lair of hungry Implementors, and did not Foresee his peril.

Lastly stood before the Queen a gentle boy, no older than the Princess. Morning-Star liked well his beardless smile, and begged her mother not to test his Luck to harshly. But Alexis caused the youth to spend an evening midst an unclean Cemetery, from whence he ne‘er returned; for eldritch Vapors carried him away, and gave no reason.

Of the Edict of Alexis, the demise of Morning-Star, and the discovery, many years after, of a Magick Stone, called Wishbringer.

Queen Alexis cried, “Is no man in the kingdom fit to wed my only daughter? Methinks she must remain unmarried, then, and Virgin all her days.” So it was Written. Morning-Star hoped death might grant her Freedom from the Edict of Alexis, by her mother’s timely passing. But the Reaper (busy elsewhere with a Plague) heard not her praying; so Alexis lived, and laughed, and watched her daughter’s beauty fade away, and all her Wishes dwindle in her bosom.

Many kingdoms after, when the reign of Anatinus was forgotten, and the names of Morning-Star and Queen Alexis lost in Time, there came unto the Misty Isle a Scholar, who, amid the crumbling tombs of monarchs, chanced upon the mortal relic of the Princess. All was Dust, except her Heart, which, hard and shrunken to a pebble in the grave, was shining brightly with the stifled Wishes of her lifetime. Thus, the Magick Stone of Dreams was discovered.

Now ye know the Origins and Magick of the Wishing-Stone. But know ye also, bold Adventurer, that every problem ye encounter in thy travels may be also bested by the spell of Logick. Exercise thy Brain, and work thy Wits! Forget ye not that Morning-Star, a Princess, who threw away her Youth in easy Wishing, died in vain.

Let her fate be thy Warning.

A Less Moral History, Not in Verse, of the Magick Dream-Stone

Wishbringer, after centuries, came into the possession of an aged woman, proprietress of Ye Olde Magick Shoppe, a magic trick and novelty story in the quaint village of North Festerton in Antharia. Her evil sister, the self-styled “The Evil One,” kidnapped Chaos, the cat of the kind proprietress, as for many years, the elderly proprietress fought to conceal the Stone of Dreams from her, and others like her, forfeiting youth, home, and family for its protection.

To save her cat (and reality, for the stone is a powerful element of many magicks, in the wrong hands), the peculiar old dame recruited the postman from the neighboring island village of Festerton. The humble postman ventured back across the bridge, into Witchville—a nightmarish, after-dark, mirror reality closely based on the daily life of Festerton.

With the Stone of Dreams in his possession, the postman found allies in a tiny mailbox, the platypi of nearby Misty Island, and an aged sorceror. Each playing their parts, The Evil One was defeated, Festerton returned to its usual quaint self, and Chaos returned to the Shoppe.

Antharia and the Misty Island intentionally have little impact on the outside world, and Wishbringer should never leave the area. Therefore, the region’s history can easily be dropped in whole-cloth, waiting for the PC(s) to arrive.

The heroes might even investigate a rash of tourist disappearances, leading to one of their number being arrested and forced to become the postman (meaning when Witchville takes over, the rest of the team can be transformed into evil versions of themselves, and generally harass the “main” character).

Bonuses and Limitations:
Occultist may only be used to provide the stone’s wielder with advice on how to proceed with a specific mystical task, through a voice in a sea-shell (see Super-Ventriloquism, above).

Bonuses and Limitations:
The Luck Advantage may not be used by a wielder who performs a stereotypically unlucky act (opening an umbrella indoors, breaking a mirror, etc.). Even when working, it only functions if the wielder carries a horseshoe.

Helper(s): “Professor” Brian Moriarty (indirectly; much of the text section is right from the game manual, a reproduction of which can be seen at Infodoc ). 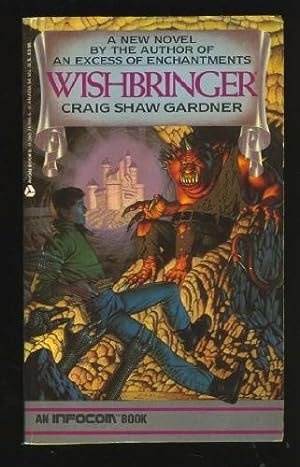