A genius, the Wizard is one of the leading inventors of the age, making scientific breakthrough in a number of fields.

He’s also a master escapologist, and taught himself to become a master of disguise in prison.

Bentley Wittman grew up a child prodigy and chess champion. His genius saw him become a renowned inventor, his futuristic technology making him rich. Using his technology for his stage magician and escapology act, he even had his name legally changed to the Wizard.

Growing bored with how easy things came to him, he decided to turn his mind to defeating the Human Torch (Johnny Storm). That was in part because the Torch’s popularity was starting to eclipse his own. As the Torch’s identity was secret at this time, the Wizard faked putting himself in danger from which only the Torch could save him.

It worked, and to show his gratitude Wizard invited the Torch to see his high-tech mansion.

Easily subduing the Torch, he locked him in an asbestos-lined room. Using a costume designed to impersonate the Torch, the Wizard went on a crime spree, robbing a bank, causing a prison break, and menacing motorists.

Howbeit, the asbestos-lined room proved incapable of handling the Torch’s maximum heat. Once the chemical which doused his flames wore off, the Torch escaped and came after the Wizard.

The Torch caught up to the Wizard after he’d finished his spree and dumped the costume. The Wizard said he knew the Torch wouldn’t harm an unarmed man. Then he invited him back to his house that night for a showdown.

The Wizard offered photos of himself donning the Torch outfit. But he then claimed the only way the Torch could get them was to kill him with his flames, or to flame off and fight him. By flaming off his identity would be recorded and revealed to the world.

Holding the photos over a fire, Wizard waited. The Torch claimed to use unknown powers to float the pictures into his hands. Actually it was the Invisible Girl, but the Wizard didn’t know this and was left dispirited by his defeat.

With the pictures as proof, the Torch was cleared and the Wizard sent to jail.

Behaving himself in jail gained him the position of trustee. The Wizard worked in the prison hospital. There he used the vast array of chemicals they left unguarded to create a substance which burned through walls.

Using it on his cell wall at night, he hid while the guards rushed through it after him. He then escaped through the open cell door. [Because, of course, there was only one door keeping him from freedom.]

Free, he decided to seek his revenge on the Torch. Returning home, he was surprised that the police would come looking for him there, but his house’s defences kept them at bay. Trapped in a stalemate, he again challenged the Torch to come and face him.

The Torch did so. However, heavy artillery [which everyone has lying around in futuristic houses] failed to stop him. Furthermore, the Torch managed to avoid falling into the asbestos-lined dungeon by hovering out of the trap. [But how was the Wizard to know that the flying Human Torch could avoid falling through a trap door in such a manner].

As to the nerve gas, it couldn’t get through a wall of fire. [Which the Torch erected after the Wizard announced he was using nerve gas].

When his house detected an intruder, but nothing showed on the cameras, Wizard deduced it must be the Invisible Girl. With a spray which made her visible, he easily captured her. Sealing her in a room rigged with explosives on a five minute timer, Wizard threatened to detonate them unless the Torch flamed off and joined her. Mr. Storm complied.

The explosives were rigged with a heat trigger to stop the Torch flaming on. Unfortunately the trigger was in the form of an alarm bell inside the room. The Torch managed to burn the hammer before it struck the bell.

Burning the bomb out of the wall, the Torch catapulted it into the sky before it exploded. With the pair free, Wizard didn’t last long, and soon returned to jail.

Partnership (Now Do As I Say)

Trapped in solitary confinement, the Wizard still managed to create a tiny explosive pill. Before he could use it, he was sprung by Paste Pot Pete, another enemy of the Torch. Pete suggested they work together to bring down their foe. The Wizard readily agreed. His idea of partnership tended towards expecting Paste Pot Pete to follow orders, though.

They used the Wizard’s house as a secret base. The police would never dream he’d go back there [and apparently they didn’t consider him stupid enough to go back there, so didn’t bother checking this time]. The pair set about scheming.

Impersonating the Torch again, the Wizard framed him for spying. But his next attempt to frame the Torch by robbing one of the world’s richest men proved to be a trap. As a result, the pair found themselves facing the Torch.

Quickly leading him back to the his house [which, despite being on a private estate, coincidentally appears to be right next to the hotel where the Torch set his trap], the Wizard again used a trapdoor. This specific one had a blast of air from above, pushing the Torch into a labyrinth of mirrors.

The labyrinth was made from impenetrable polished steel. The Wizard intended to flood it with a fire-extinguishing liquid.

But he again underestimated the Torch’s maximum heat. While it took most of his energy, the Torch managed to burn through the steel, leaving a flaming facsimile in his place. Storm quickly subdued the criminals. Their partnership ended in bickering acrimony, with the pair in jail.

Behaving himself in jail long enough to gain access to the workshop, the Wizard used a sleeping gas on a guard. He disguised himself as the guard (after reading a book on it in the prison library), then used his anti-gravity power unit to fly to freedom.

What would freedom be without the opportunity to revenge himself on the Human Torch, though? So, with his previous hideouts having somehow been discovered [possibly because he always used his house], he decided to hide in a new identity.

Setting himself up as a TV producer, he invited the Torch to record a one-man charity performance of his powers. The Torch accepted, and the Wizard got him to perform until his flame was exhausted, then knocked him out.

Disguising himself as the Torch again, this time even when not flamed on, the Wizard subdued the Invisible Girl. Then he announced that they were taking a vacation from the Fantastic Four. They inevitably get free, and the Torch came after him.

Having used the time to hone his anti-gravity technology, the Wizard tried using them on the Torch. He failed, and tried to fly away, increasing his device’s power to its maximum. He escaped, but the device jammed, leaving him ascending, unable to stop himself.

He was only saved when the Trapster (formerly Paste Pot Pete) and the Sandman passed by in an airplane during their escape from prison. Joining forces, they decided to gain their revenge on the Torch and the Fantastic Four.

Arrogant, egomaniacal, and intellectually superior. While the Wizard can be charming and personable when it suits his purposes, he regards everyone around him as his inferior. Furthermore, he sees his defeats as being solely due to luck.

He has trouble in any kind of partnership, since he can’t accept anyone as his equal. So he tends to order them about.

He became fixated on proving himself superior to the Human Torch, whose press attention was greater than his. The Wizard became obsessed with getting revenge for every defeat.

Despite his great intellect, which he makes sure to mention at every available opportunity, his plans tend to be fairly simple. The Wizard doesn’t consider more than one or two contingencies to be necessary for any plan his brilliant mind devises. Yet he continually underestimates the Torch.

“I have proven my mental superiority in countless ways ! There is only one challenge left for me — to defeat the Human Torch ! That will be my ultimate achievement !”

“It’s useless to protest ! I am your mental superior and I’m going to defeat you ! Nothing can stop me ! Nothing !”

“The fools think they can keep me locked up, but my superior intellect has already devised a plan of escape !”

“Of course we’re partners — in crime ! But I shall lead and you shall follow ! Now be quiet… while I plan a brilliant crime to pin on the Torch !”

“No wonder they call me the Wizard ! I can outsmart anybody !”

The Wizard would likely try to prove his superiority over one of the smarter super-heroes, such as the Atom (when his identity became public).

Equipment:
He uses a range of devices in this period, presented in chronological order:

He transformed his ultra-modern home into a virtual deathtrap over time. It was already technologically advanced, with air chairs (chairs composed entirely of air), robotic wardrobes, and every other showy luxury he could think of.

It also became armed with:

It can also be expected to have a couple of 8 AP ABC Omni-Gadgets designed for anyone he’s expecting. 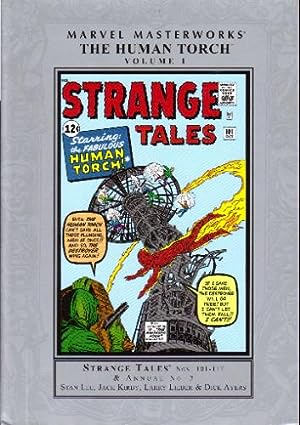 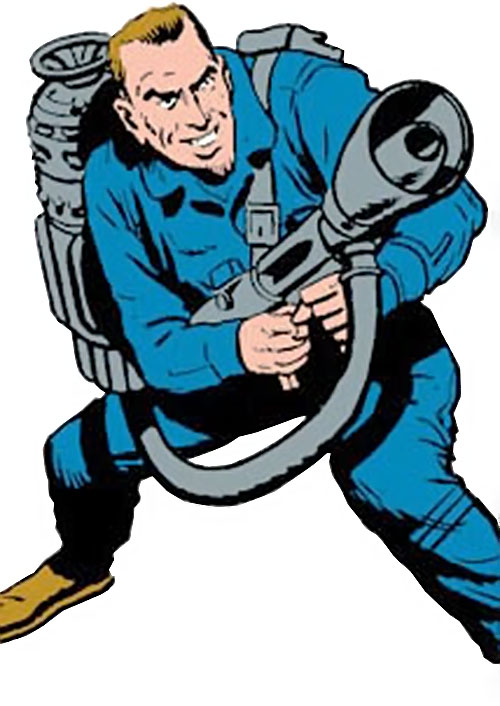 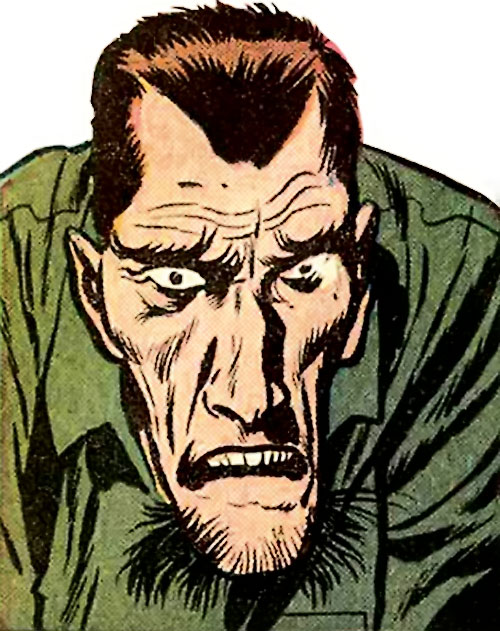 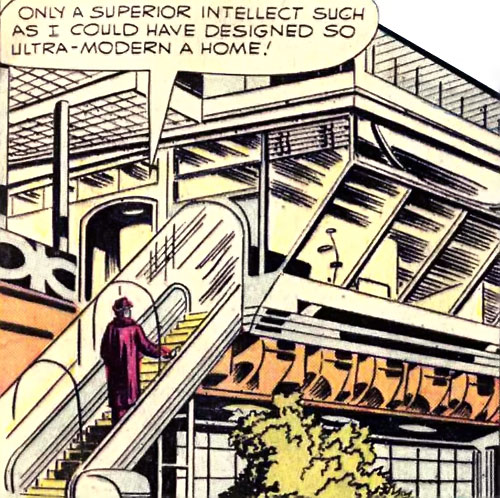 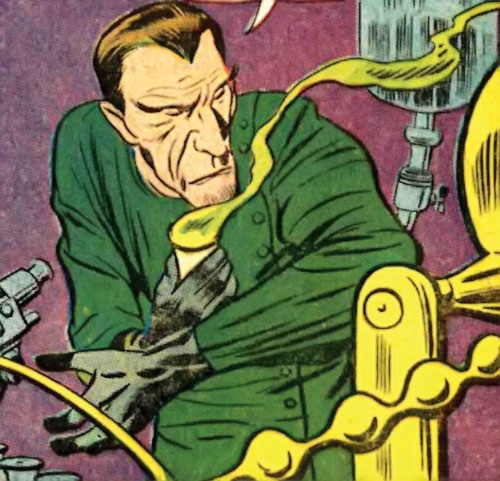 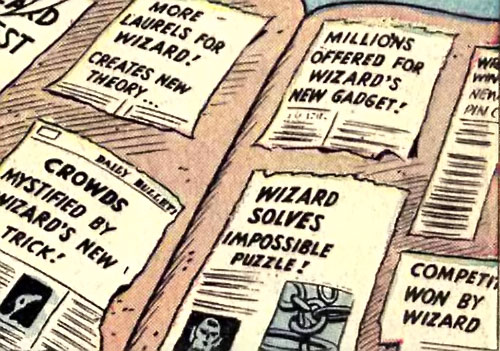