Most of the changes in the solo series have been retconned away as illusions created by Mephisto, other than the basic concept of Wonder Man as an energy being. This is understandable given the continuity conflicts the series had with previous material.

Nevertheless, I’m presenting this write-up out of affection for that series. These stats may also be useful as a depiction of a future Wonder Man or one from an alternate timeline.

Simon’s overall power has increased to the point where he is the physical equal of the Hulk in one of the Jade Giant’s most powerful incarnations. Howbeit, his unique body composition is somewhat more vulnerable to energy and sonic attacks than other types (Attack Vulnerabilities).

Due to multiple exposures to the Enchantress’s powers, Wonder Man began developing a resistance to her mind control spells. He was able to subtly undermine her plans even though he was still under her spell.

Because his body is an energy field given shape by his mind, Simon can radiate that energy in various forms (Energy Blast, Flight). He is also capable of altering his bodily characteristics (Chameleon, Omni-Power; some Powers mimicked so far by Omni-Power include Bomb (Self-Link) and Growth).

Simon has only recently become aware of these latter abilities. Thus, he is still in the process of exploring his newfound potential.

It is possible as he becomes more familiar with these abilities that he will be able to alter himself with greater ease (Omni-Power could eventually become Force Manipulation (Self-Linked): 10 and Chameleon would lose its Limitation). Force Manipulation (SL) would allow Simon to alter his body in order to manifest new Physical Powers.

Given the references to his body being fields of electromagnetic force held in shape by his mind and his demonstrated ability to manipulate and project those energies, Simon might also develop some energy manipulation abilities such as Magnetic Control.

Simon discovered that the battles he had fought recently had a sinister link. All of the fights and difficulties Wonder Man had faced since he had come to Hollywood were part of a plan by Mephisto to subvert Simon and capture his eternal soul. As Simon was learning of this, Mephisto’s son Blackheart asked Williams to join him in his fight against his father.

Simon managed to outwit both of the demons, saving Alex and freeing his parents’ souls. He worked out his family issues and conflict with the Scarlet Witch at the same time, albeit at the cost of his brother’s life. Erik sacrificed himself protecting Simon from Mephisto because he wondered “what it would be like to choose to be good.”

It was also during this time that the Beast discussed with Simon the results of his research into ionic  energy. It showed Simon capable of far greater potential than either of them had realized.

These newly revealed powers, combined with the conquering of past demons (figuratively as well as literally), gave Simon Williams a new-found resolve to devote himself to being a superhero who acted with a view toward the future, a protector of all of Earth.

He also withdrew his Enchantment from the Crazy Eights at their request. The two exceptions were Jamie, Alex’s daughter, and Spider. Both secretly retained a portion of their ionic enhancements.

Putting his newly developed philosophy to work, Simon began his work on an international scale. However, his mission to protect a new agricultural project in the impoverished nation of Kanem brought him in conflict with the Hulk.

Once Simon convinced the Hulk they were working toward similar ends, the two teamed up. They stopped a military coup in Kanem that would undo the agricultural efforts meant to relieve hunger in that area.

Returning to Hollywood, Simon decided that having a family would be another way to contribute to a better world future. He asked Alex to marry him, and applied for the two of them to become the legal guardians of his sidekick, Spider.

Simon Williams is a tall, athletically built man with handsome features and tousled hair. His eyes normally glow red, but he can dim the glow so people don’t find it disconcerting. When enraged, his eyes glow even brighter, seemingly flaming with ionic energy.

He previously dyed his hair black, but can now maintain that color as part of his limited shape-shifting abilities.

His costume is a black body suit with fingerless gloves. It has red flank panels, belt, and sleeve and leg stripes leading to red boots and red fastening straps on his wrist and collar. The belt buckle has an infinity symbol and there is a “WM” symbol in red upon his chest.

Simon’s battle with Mephisto provided him with an opportunity to come to terms with his doubts and move past them once and for all. Accordingly, Williams has become a more mature, responsible and somewhat jocular individual.

In the wake of revelations about his true potential and his effective immortality he has devoted himself to making a large a contribution to the world as he can. This includes humanitarian efforts to disadvantaged countries and striving to make movies that inspire others.

Despite these changes, Simon still has a bit of a temper. He also has the fanaticism of a recent convert in relation to his new mission of global change. As a result, he still has a tendency to resort to force even when more peaceful options are available.

While Williams has a bad habit of sometimes rationalizing his bull-in-a-china-shop behavior as part of the importance of his new cause, he is learning to try other approaches.

The extreme acts of public brutality Wonder Man committed during his recent troubled period have accumulated to give him a reputation of being irrationally violent. He is often referred to as “the savage Wonder Man.”

This is another personal area where Williams vacillates. Sometimes he acknowledges how his actions reflect on him and modifies his behavior appropriately. Unfortunately, there are also moments where he blames his reputation on bad luck and misunderstood circumstances rather than admitting to himself that the primary fault lies with his own poor choices.

While he still makes flimsy excuses for his mistakes at times, Simon Williams is making strides toward accepting full responsibility for his own behavior. As this process continues, he will presumably learn to approach both his personal life and his newfound cause as a global hero with a more balanced perspective.

“I am no savage ! But everything that happens conspires to make the world think I am.”

Simon battled Neron instead of Mephisto; Neron offered him greater power to save his friends. In rejecting Neron’s offer, Simon discovered he already had more potential than Neron had offered him. In the aftermath he married Alexandra and rejoined the JLA.

Because of the more global considerations Simon embraced, he and the Martian Manhunter became a sort of JLA Auxillary for some of the countries that usually did not benefit from a superheroic presence. Following the Martian Manhunter’s lead, Williams used his own Chameleon abilities to take on new identities and get a better sense of the lives of common people across the world.

Advantages:
Government Credentials (Avengers, Low), Life Support (All except No Need to Sleep), Miscellaneous (Wonder Man has a +1 CS to OV/RV versus the Enchantress’s mind control magics), Scholar (Weapons Design).

The following are some events that would have likely transpired if the series had continued. 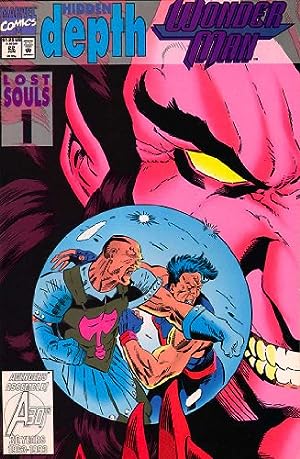