Woof is one of the Jokerz, a colourful Gotham street gang. These guys appeared in Batman Beyond.

This well-regarded 1999-2001 animated series took place in a possible future of the animated DC Universe.

At some point the human Woof underwent gene splicing to gain hyena-like abilities.

Of course this also granted him a lot of drawbacks as well. But he nevertheless could ascend to the elite of the Jokerz.

The Jokers have no connection to the criminal master mind The Joker who terrorized Gotham City in an era gone by. The one exception is the Dee Dee twins who don’t seem to be aware just how close to the original they are. It seems highly likely that they merely grew out of the mythos that the original laughing man had created.

Hair of the dog

Woof was one of the few members to be recognized as elite. That was most likely because he’d gone in for some illegal gene splicing with hyena DNA. This likely was inspired by the pets of the historical Joker in this continuity.

The original Joker then came back to haunt Gotham City decades after his alleged death. He saw these foolish and impressionable thugs as easy recruits. He then sent them to steal the technology he needed to “once again give this town a wedgy.”

The thefts proceeded smoothly at first. But then the new Batman got wise, and ambushed them. After a brief scuffle the Jokerz attempted to make their getaway with the stolen goods.

Woof and Ghoul stayed behind to delay Batman. But they were handily dispatched, allowing Batman to pursue the others and ultimately foil the heist.

On the Clown Prince of Crime’s overt service

Woof and the original Joker later held off the new Batman with a distraction. This allowed their teammates to escape with the final piece of equipment they needed. 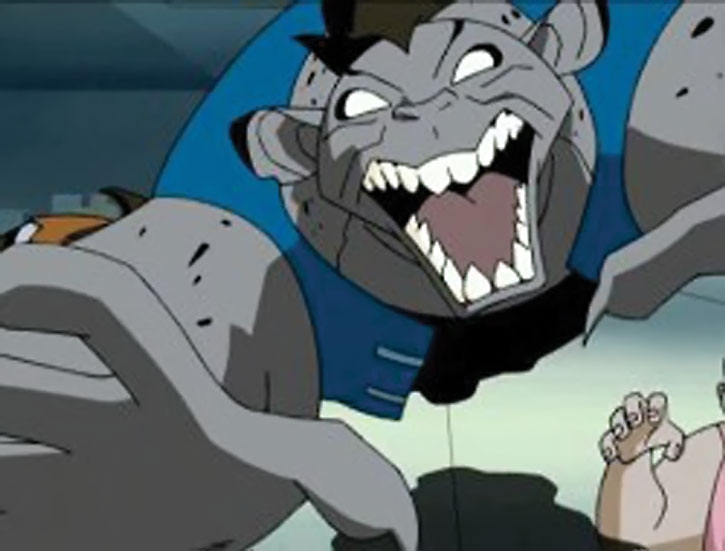 After that the Joker sent them to silence Price, who had been the Jokerz silent accomplice in the previous heist. Woof helped subdue Price and the Jokerz made their getaway. However, Batman showed up at the last moment. He saved Price before turning him over to the police.

A lot happened after that, but Woof was one of the first to confront Batman in the final battle. However, he was mauled by Ace, Bruce Wayne’s guard dog, whom Terry had brought along to specifically deal with Woof.

In an alternate future Woof was shown to be among Chronos’ thugs.

He seemed to be more or less the same generic thugs upgraded by having a set of metal to replace his “natural ones.”

Woof is a half-man half-hyena hybrid. He has dark brown hair, yellow eyes that look like a hyenas, and light brown fur with spots covering the rest of his body.

He commonly wears black pants, a black tank top, and a blue vest over it. He also has claws and fangs.

Woof snarls and growls a lot.

Not much imagination is needed. He’s a half hyena thug who snarls most of the time. He generally acts like an attack dog who can’t wait to be whistled into action. He does occasionally snicker like a hyena when he’s done something right.

Woof is aware that dogs are better predators than he is.

Security Guard: “Stay back !” (levels his gun at the incoming Woof who knocks it away and proceeds to claw up the guard)
Ghoul: “He should’ve said ’heel‘.”
Woof: (laughs)

The Joker’s could be dropped whole cloth into modern Gotham, obviously as Bat foes. The Joker, like most criminal masterminds, has been known to employ henchmen to assist him with his exploits. Why not just use the Joker’s as a set to keep with his whole clown motif?

Woof could also be used in a campaign that contains Moreau -like half human half beasts.

Equipment:
Not really. Woof seems to rely on equipment less than any other member and just uses the powers granted to him from gene splicing.

It is entirely possible that Woof has other canine powers not demonstrated in the movie. Analytic Smell/tracking Scent is a guess since he seemed to sniff around a lot. Other possible powers might include: Extended Hearing: 02, Super Hearing: 02, Ultra Vision: 02.

Equipment:
None, but he’s likely to have access to plenty of cool toys because of his connection with Chronos. Although whether he’s smart enough to use them when he needs them is subject to debate. This version of Woof did have metal arms with claws though. 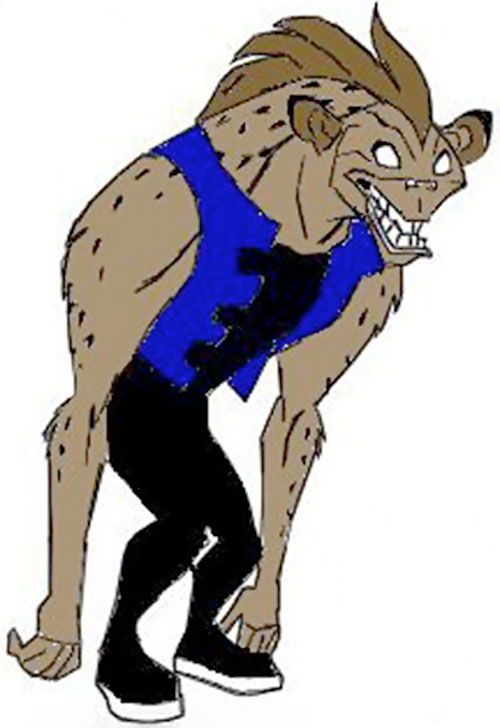 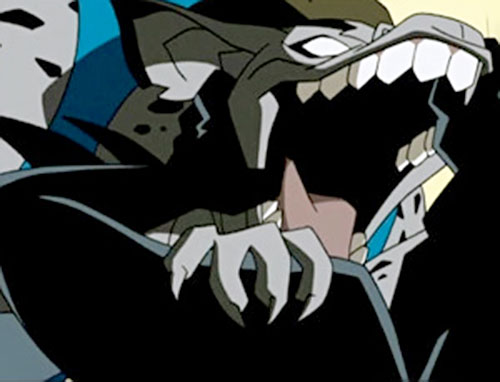