The Word has some sort of affinity for the printed word in any form. With a simple touch, he can remove text from any medium, whether it’s on a piece of paper or a computer screen. He also can place text onto any medium as well, including his own body.

This display of text is his only form of communication with others. He does not speak, or make any sort of vocal sound.

It is rumoured that his affinity for text also includes decryption, decoding and translation abilities.

A world-class spy, The Word can retrieve secrets few can access. It also seems that he can adhere to surfaces, such as walls.

The Word is a freelance spy of sorts. He’s willing to work for anyone who is able to meet his exorbitant rates. Among his clients have been prominent supervillains, such as Vandal Savage, and powerful government agencies.

It appears that he owes allegiance to no one but himself, and he’s good enough to almost always escape detection.

The Word is both an ominous, weird figure and a world-class spy. The silence surrounding him is eerie, and his presence and looks unsettling.

As befits such an ominous figure, the Word has nerves of steel and knows many things. For instance, when confronting Agent Chase, the first thing he said — or rather, wrote — was that he regretted the death of her father. This put Chase off-balance.

While working, The Word always attempt to avoid detection and direct confrontation. He prefers to slip away from his opponents and leave them perplexed as to what happened.

When The Word takes physical action, random words having to do with his current action appear on his body.

He would have originally been trained as a member of the Espionage Elite by Spymaster I. 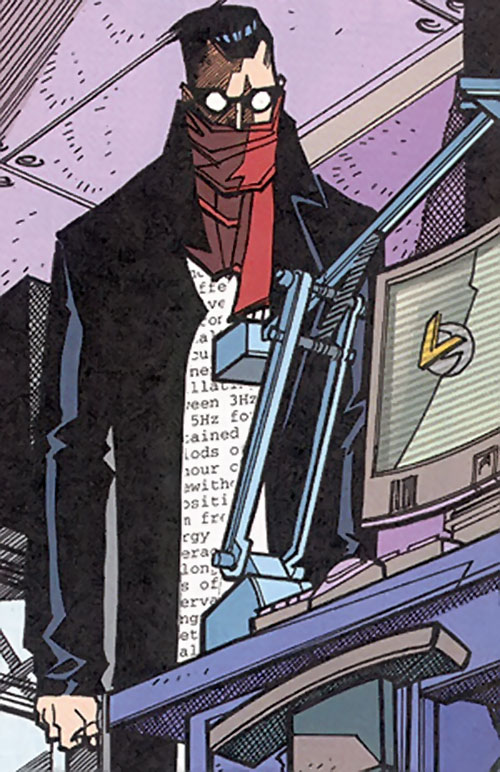