The Word is a weird, obscure She-Hulk villain. He first showed up in 1980 and yeah, he wasn’t seen much afterwards.

But he’s a useful villain to have ! It’s just that using him without looking cheesy is difficult.

The Word is an amazing orator. He has a great voice, a riveting presence and an impressive command of the English language. People love listening to him. He can convince most persons to agree with him.

Mr. Wordman finds it easy to create a cult of personality. From there he will soon derive superior wealth and numerous helpers.

Though he’s no longer in his prime the Word is a large, broad-shouldered man. He’s also highly intelligent and an excellent planner.

The Word was a senior scholar and editor for the world’s largest unabridged dictionary of the American English language. He thus spent years of intense work on words and their meaning. He eventually snapped and had a epiphany. Words held great power, and his formidable mastery over them should give him power.

The former editor became Wordman Jack, a DJ with a down and out radio station. He quickly revitalised it as listeners flocked to his show. All of his demands for raises were granted thanks to his amazing power of conviction… and the station soon went bankrupt from the cost. It was presumably during this era that he had his daughter, Ultima.

Now affluent, Jack Wordman became The Word, the leader of a quasi-religious cult in the L.A. area. It was headquartered in a beautiful and isolated compound. The Word gave regular lectures about self-improvement and the power of conviction. These kept the cult members enthralled.

The Word had theories about education that he tested on his daughter from infancy. Using his amazing power of persuasion, he taught her the value of mental discipline. He conditioned her to have such belief in her abilities that she was effectively superhuman. Ultima worked as a demonstration of the power of the Word, and as an enforcer when things went wrong.

In 1980, the parents of a young man living with the Word’s cult contacted lawyer Jennifer Walters to recover their son.

Walters’ attempt ultimately failed. The Word easily subverted the court of law even after Walters obtained a signed statement from the young man. A brawl later erupted between Ultima and Walters’ superhuman alter-ego the She-Hulk. During the fight, Ultima was accidentally rendered comatose by a falling car.

After months of depression and having forswore speech over the health of his daughter, the Word attempted to use the power of his words to have her walk and speak again. After more than a year of work Ultima was fully healed, and more powerful than ever.

The Word then built up a new cult, this one dedicated to the suppression of inequality to built a perfect society. He even brainwashed the two S.H.I.E.L.D. agents sent to investigate his activities. 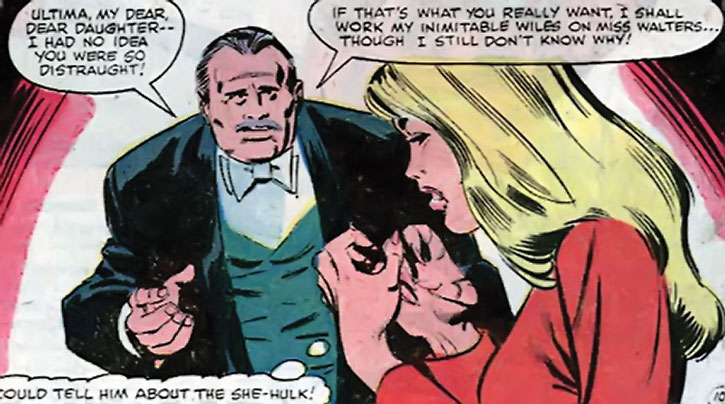 A young woman fled the cult and attempted to warn the Fantastic Four. But Ultima stopped her right before she’d reach the Baxter Building. However the fleeing cultist survived the assault and warned the Thing.

The investigating Torch and Thing were captured thanks to the perimeter defences and Ultima. They were made to join the work gangs toiling for the Word to soften them up for brainwashing. Nevertheless, the two heroes got rid of their power-inhibiting collars and engaged the security.

Things weren’t going too well for the fantastic two. But the overconfident Word got too close. The Thing thus knocked him out with a flick of the finger. Seeing her father so easily defeated eroded Ultima’s confidence in his words. Which shattered her cure and incapacitated her.

The Word and his cult were arrested by S.H.I.E.L.D.. They haven’t been heard of since.

The Word is a calm gentleman used to being in power. He’s prone to oratorical excess, unabashedly sesquipedalian, and deploys an extensive vocabulary. He’s confident that what he does is utterly justified.

Jack Wordman loves his daughter very much, and indulges her every whim.

“I understand your apprehension, madame – believe me, I do ! But to advance and achieve proper mental attitude is all. That’s why it’s so very important to associate only with others of the same outlook !”

“Trouble, Randolph, my boy ? Every adversity conceals opportunity ! What seems to be amiss ?”

“The Thing and Torch may presume to pass into my complex like other potential initiates… but they are wrong ! Like others of their unique ability, the path of their enlightenment has been specially prepared !” (triggers remote defences).

Thing: “Awright, who’s the wise guy ?”
The Word: “The correct term is ‘all right’, Ben Grimm ! Remember, proper English is pursuant to well-adjusted perfection ! You were, referring, of course, to the attire both you and Johnny Storm are wearing ! I shall explain all in due time. But first I shall introduce myself — I am the unexcelled master of metaphor and mentor of the new movement to employ machines for all but the lightest labour ! Thus shall I level the excess of inequity in our society forever — for I am… The Word !”

He could have been an early Teen Titans villain. Back when their rogue gallery included such highlights as Mister Twister and the Mad Mod. The Word and Ultima would have been cool, comparatively.

One of the characters named the Word in the DCU could be another enhanced child of the Word, like Ultima.

King of his castle

When the Thing and the Torch came to the Word’s then-current estate, they were met by sophisticated defences:

King of his castle

When the Thing and the Torch came to the Word’s then-current estate, they were met by sophisticated defences: 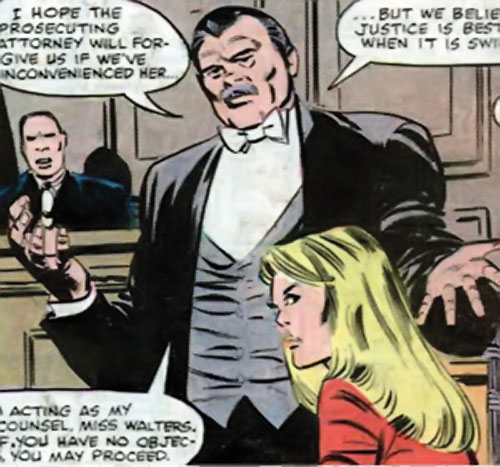 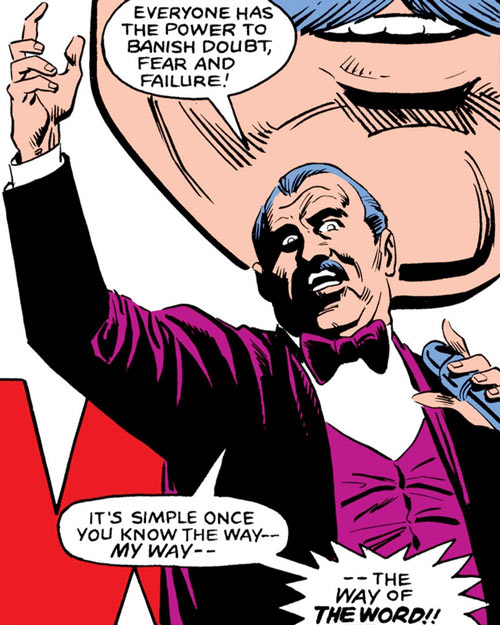 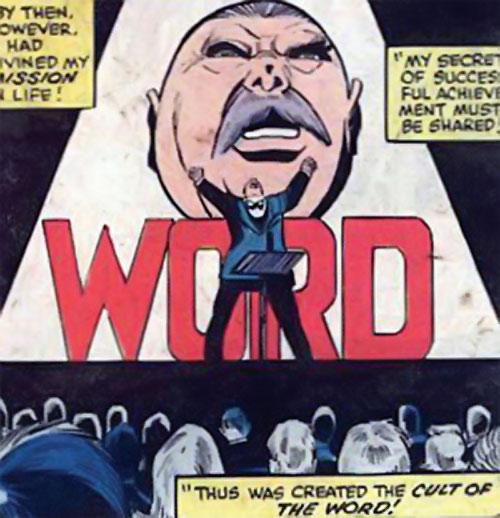