As a Klingon, Worf enjoys some of the natural traits of the species such as redundant organs and above-average durability.

He also has a fair amount of training and experience in martial arts and starship security and tactics.

Worf was orphaned at the age of six during the Khitomer Massacre, when the Romulans attacked the Klingon colony on that planet. He was adopted by a family on the Starfleet vessel that responded to the attack. Worf eventually joined Starfleet and served with honor as a security officer. He eventually became Head of Security on the famous Starship Enterprise.

After the Enterprise-D was destroyed, Worf moved on to Head of Tactical Operations at the strategically-placed Deep Space 9 station. While there, he married Jadzia Dax (who later died) and killed the incompetent Klingon Emperor Gowron, placing his trusted friend General Martok in Gowron’s place.

At the end of the Dominion War, he became the Federation Ambassador to the Klingon Empire. The ambassadorial position did not last – it didn’t suit Worf’s temperament. Thus, he went back to Starfleet as tactical officer aboard the USS Enterprise-E.

Worf is a dark-skinned, muscular Klingon male, with a dark brown lengthy mustache and a thick mane of hair, which is usually bound.

He wears a metallic sash (a family heirloom) over his regulation uniform, slung diagonally over his right shoulder.

Worf is often a dark, brooding presence. He maintains a certain social distance in most circumstances, but is highly loyal and dedicated to his friends and the ideals of Klingon Honor.

“Perhaps today is a good day to die.”

“If you were any other man, I would kill you where you stand.”

The Enterprise-E crew has encountered the Marvel Universe’s X-Men on two occasions. The first encounter occurred when the Enterprise-E attempted to use the Borg temporal vortex to return home from 2063 (ST: First Contact).

The Enterprise-E crew was accidentally shunted into the Marvel universe and helped the X-Men fight Kang the Conqueror (the MU villain, not the Klingon Commander) before returning home (Star Trek: The Next Generation/X-Men: Second).

Later, several X-Men traveled to the 24th Century and assisted the Enterprise-E crew in dealing with spontaneous mutations on a Federation-allied planet (“Planet X” novel). The Enterprise crew could easily encounter residents of the DCU under similar circumstances, particularly if Hypertime is involved.

Bonuses and Limitations:
Invulnerability represents redundant organs, so it can only be rolled once for a given set of injuries (-2FC).

Equipment:
See the Star Trek Personal Equipment write-up. Worf also uses a Bat’leth [BODY 07, EV 04 (06 w/STR)] or a Mek’leth [BODY 07, EV 04 (06 w/STR)]. The Bat’leth is a large crescent-shaped sword (with the handles on the concave edge of the sword) frequently used by more prestigious Klingons. It is often referred to as the Honor Sword because of its use by the legendary Kahless the Conqueror.

Worf switched to using the Mek’leth, a short sword with a second blade extending parallel to the handle, because it was smaller and thus easier to carry unobtrusively.

The above write-up represents Worf after having finished his service at Deep Space 9, and returned to the Enterprise. Before DS9, he had somewhat less experience. Back then, he had only a total of 30 HPs and a Military Science Skill set at 4 APs only. Military Science increased to 5 APs during his initial stay at DS9, and is today a full 6 APs. 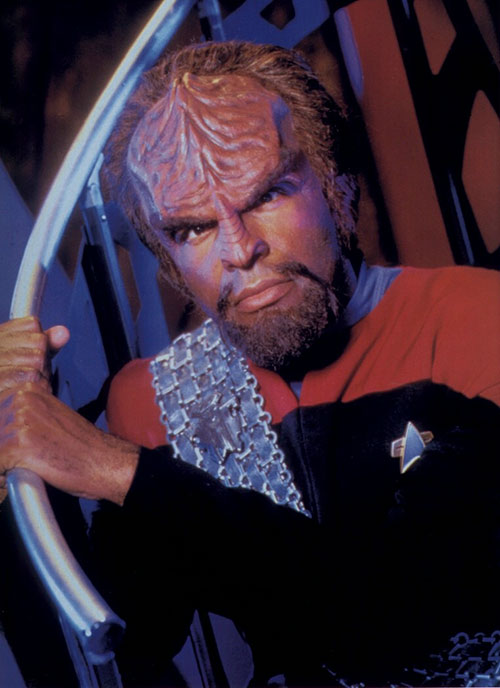