“Eric” is something called a xombi. Xombis have a supernaturally potent blood that heals even the worse wounds they might suffer, making them practically unkillable.

Xombis don’t seem to have inborn supernatural abilities. But it is possible for them to learn how to use the potency of their blood like a vampire would. This is likely the explanation for the impressive bursts of strength and speed regularly demonstrated by “Eric”.

As a xombi’s body constantly regenerates itself, the high neural connections are regularly rewritten. this makes it very difficult for a xombi to remember anything for more than a few years. Memories with a strong emotional charge can be retained longer, and various tricks and mementos can be used to combat memory erosion.

In the end though, entropy usually wins and memories and identity from too long ago fade away.

As an individual, “Eric” is a savage and vicious fighter. She possesses a startling level of speed, strength and agility. She fights in a calm and methodical fashion, as if not really involved in the situation, and deploys an arsenal of high-powered weaponry that works well against vampires.

Despite her impassivity, “Eric” routinely comes up with overwhelming tactics. These often rely on the fact that she doesn’t care about the risks she’s taking, and make her very difficult to counter.

A typical moment of hers involved barging into a restaurant full of vampires dressed with but a ragged old skirt – but also slattered in flame-retardant gel then doused in gasoline, holding a pair of white phosphorus grenades and dragging a large axe.

She generally excel at using her environment. Such as perforating a huge aquarium using a M4 loaded with armour-piercing bullets then blowing up a power main so it’d hit the water. Rappelling down buildings to assault a floor, explosives-laden suicide truck attacks, boarding speeding vehicles by running in front of them and throwing herself through the windshield whilst shooting, etc. are also common approaches of hers.

“Eric” has a manic intensity to her and there’s something supernatural to her presence. This allows her to navigate the underworld and the streets through sheer presence despite her lack of conventional social skills.

Given her roots, some of the bigger names from older French punk-rock seems inevitable. But most of the audience on writeups.org will lack cultural and linguistic context for bands such as Bérurier Noir or La Souris Déglinguée (never mind Gogol Premier). So let’s go for 1980s punk-rock stalwarts Parabellum.

This specific song, Cayenne, is actually a cover of Aristide Bruant (1851-1925) about street criminality and the overseas forced labour penitentiary in Cayenne. But even without understanding this old text the slow, threatening, heavy, growling march of guitars and drums is pretty spiffy, and fits this profile well.

“Eric” has very little idea of whom she is and where she comes from. She doesn’t care. It would seem that during the mid-1990s she was a vagrant in France. Or maybe working with a troupe of street artists (or perhaps a punk band) in an unclear capacity.

She started a relationship with a young police detective (though he may have been a private detective or a Renseignements Généraux  man). He was investigating oddities in the behaviour and orders he received from his superior.

The detective’s investigations apparently disturbed powerful parties. A pair of vampires attacked and slew him in his apartment while he was with his lover. Beside herself, the woman slew the two vampires with broken furniture and a power cord – then went in a sort of shock.

She woke up several hundred miles to the East with her naked feet bleeding, wearing but a torn little black dress and clutching the most prized possession of her lover, a signed copy of James O’Barr The Crow.

The indistinct memories of the tragedy did not fade like everything else. The nameless xombi clung to these despite the pain, much like picking at a scar. Having no idea of what to do she drifted toward Greece. This is where the vampire assassin sent to close this loose end finally tracked her down.

The undead killer ran over with her truck on a mountain road, then buried the seeming corpse on the roadside.

The assassin was enjoying the last hour of night when her victim clawed her way out of the shallow grave. The corpse hacked the vampire using a nearby shovel. The xombi found herself in possession of the pickup truck, which held powerful weapons and crates of ammunition – all intended to kill other vampires.

The trade paperback copy of The Crow was ruined. The xombi started calling herself “Eric” to symbolically replace the lost book.

In Istanbul she had stylised tears tattooed on her face and her engagement ring turned into a lip piercing. These were more attempts at not forgetting the sliver of identity her loss was giving her.

Still in Istanbul, “Eric” decided to keep her memories for as long as possible by fixating on vengeance. Her trail of destruction cleft through Europe, slaying dozens of vampires. She never sleeps, she doesn’t need anything, she’s armed to the teeth and she proved amazingly cunning, vicious and dangerous.

Being mostly a crazy street punk, “Eric” can be manipulated (though this is riding a tiger). She has formed some alliances, including a slightly overweight and quite nervous Anglo-Portuguese mage. These folks know that she can be a formidable ally against paranormal menaces… as long as they’re really, really careful around her.

“Eric” vanished during the early 2000s. It is likely that she finally forgot about her vengeance.

Her long black hair is dirty, tangled and matted and her face sports black tattoos that look like stylised streams of mascara created by tears. Her lower lip is pierced with an engagement ring.

Her clothes often bear clear traces of bloody wounds and impacts, some of which look fatal. “Eric” usually wears very worn basketball shoes, slim jeans sliced open with numerous razor cuts, and some sort of long black coat that looks it was found in a dumpster (and quite probably was).

She usually sports a ragged black T-shirt with the logo of some metal band, her favourite ones appropriately bearing the logo of trash metal band Slayer.

She often carries a large sports bag full of weapons. It easily weighs 70 kilograms or so though it’s not visible when she carries it.

“Eric” has little in the way of curves, and never tans. She’s a chain smoker, downing about five packs a day.

The xombi comes across as a crazy vagrant and street punk. Or maybe a metal lowlife stoned out of her gourd. She doesn’t speak much and articulates poorly, sounding slurred and spaced out.

“Eric” struggles a lot to stay focused, and what works best is to kill all vampires and things like that out of revenge for something she doesn’t remember clearly.

Though she’s a dysfunctional psychotic mass murderer employing near-suicidal terrorist shock tactics, “Eric” is not a bad person. She just really hates vampires. She’s surprisingly good at avoiding collateral damage, and can’t even be described as a fanatic. It is quite possible to reason with her, though she’s not entirely rational.

Most of the time she just drifts and comes across as hollowed out, passive and broken. However it is just a matter of time until something — often a trivial, minor detail like a smell or colour — resonates with what few memories she has. Then she suddenly refocuses and goes on the warpath for a week or so.

Being vaguely schizophrenic, “Eric” tends to obsessively focus on some arcane details for hours while she’s in her down states. Such as making ripples in a puddle using a broken pen taken from the trash.

While she clings to whatever sense of identity and past she can scrape together, she’s not very good at it. She cannot learn long-term mental skills (muscle memory works fine, though), so it is impossible for her to develop the discipline.

Her life is essentially an uncontrolled slide from contextless thing to contextless thing, forever. And punctuated by violence no matter what as her blood attracts all sorts of unwelcome attention.

Source of Character: A World of Darkness campaigns along the years. 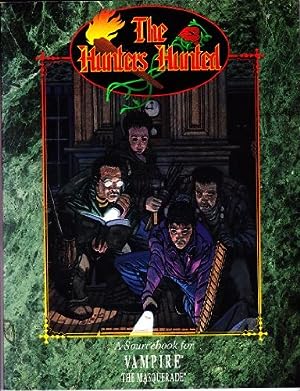