Wormhole can transport himself and others over vast distances of space and time, and even to other dimensions .

Wormhole was one of the victors of the gladiatorial games held among the enslaved Inhumans by Loki in the 31st Century. He thus became part of the small cadre of Inhumans Loki was grooming to be his personal strike force to help him claim the throne of Asgard .

Just as the time arrived to attack, the Guardians of the Galaxy investigated the Inhumans enslavement. This brought them into conflict with the Inhuman Assassin Squad. Wormhole joined in the torment of the captive Guardian Talon. He was about to teleport him to his death when the other Guardians arrived.

Wormhole tried to teleport Yellowjacket through a wormhole. But she shrunk quickly, giving the impression of getting sucked in while actually escaping from the trap. The Inhumans then left the battle as Loki calls on them to join him in his invasion of Asgard.

Attacking Asgard, they made significant headway against its defences. But the Guardians then arrived to oppose them. When Charlie-27 realised that Wormhole needed to see targets to teleport them, he held him immobile from behind. Nikki then flared up in front of him, blinding Wormhole.

When Woden, son of Thor joined the Guardians, the Inhumans and Loki were soon defeated. They were banished to The Black Canyon, an inescapable prison nestled between Niflheim and Muspelheim.

In his blinded state, Loki wove protective spells around Wormhole. These were to keep him hidden from the giants while he recovered his sight. Keeping his recovery a secret, Wormhole escaped the Black Canyon, abandoning his team mates.

Petty and vindictive, Wormhole has no particular allegiance to his team mates. He happily abandoned them to their fates when he felt he could get away unopposed. He is solely interested in his own well-being, and in getting his revenge on those who have offended him.

He mocks those who’re at his mercy.

“I’ll send him to the butt end of the galaxy !”

“When I’m through with the Guardians *cackle*, they’ll regret the day they ever crossed my path !”

Freed from some of the Dominators chambers, on the Moon, by the Time Trapper, the Inhumans joined his quest for revenge on Glorith. They attacked her on the Khund throne world, while she orchestrated military actions against the UP.

They came into conflict with a squad of Legionnaires, who forgot about them when Glorith erased them and the Trapper from history.

The Trapper managed to save them from complete destruction, although they are currently trapped within him. With the Dominator mindwipes having removed their previous memories, Gloriths actions have now made it impossible for them to ever learn who they were. 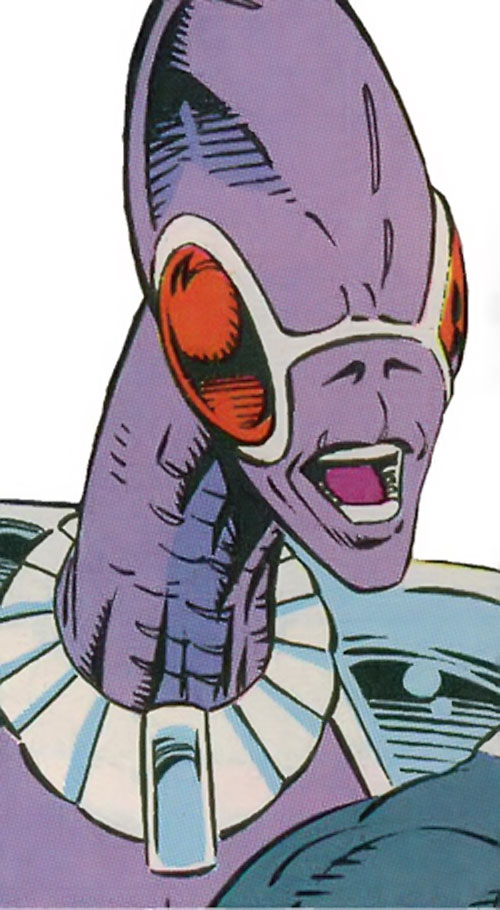