The Wraith is an immensely powerful mentalist. He can :

Additionally the Wraith could read the thoughts of people, although he couldn’t upkeep any mental communication with anyone. He’s also a powerful telekine  able to float around several tons as he sees fit.

His main drawbacks were that he could only use his mental commands against any single opponent at once. And though he’s no weakling, by super-hero standards he’s easy to defeat physically. However, laying a hand on him was quite impossible as long as he used his illusory abilities.

From his police days he was a novice detective and could handle a gun.

While under the mental influence of his father, he was an instrument for his will. He said and did exactly what the father wanted with no chance of interference.

Brian DeWolff used to work with the New York Police Department. His sister, Jean DeWolff also wanted to become a police officer, despite the wishes of their father Philip DeWolff.

Brian was a good cop until the day when he was patrolling in a car with his colleague. They were both set up by criminals. His partner died when the criminal gang drove straight into their car.

Brian had to engage in a gunfight with the five of them. He killed four, but was himself shot by the fifth. When the police came to investigate the crime scene Brian’s body had disappeared.

Two years later arose a mysterious terrorist by the name of the Wraith. He was killing selected individuals by throwing explosive toy planes at them (!). Spider-Man (Peter Parker) was a witness to one of those killings and became involved in the case.

Later the same vigilante tried to kill Jean DeWolff in her office, but Spidey and later Iron Man (Tony Stark) joined in. They faced the Wraith, but they were both easily defeated. The Wraith left a warning not to interfere.

Right before, Philip DeWolff had visited his daughter, Jean, and showed her a recent letter that the presumed-dead Brian had written. Spider-Man contacted Dr. Strange for help in determining whether Brian was dead. It seemed that the Wraith might be Philip himself.

Strange helped Spidey by showing him what had really happened two years ago in that gunfight. The fifth man had indeed shot Brian, but the gunman himself was then shot by Brian’s own father! Philip had then taken away Brian’s seemingly lifeless body.

Jean DeWolff, Spidey and Dr. Strange went to the house of Philip DeWolff separately. But they were attacked by the walls upon arriving there. The Wraith appeared and defeated them all.

They later woke up in a lab, bound to the wall, where Philip and the Wraith stood. It was revealed that the Wraith actually was Brian DeWolff and not Philip. Philip told them that Brian had fallen into a coma. He had allowed doctors to perform surgery on Brian so that he would survive, but they had to do it in hiding.

Philip had planned for Brian to become a vigilante avenging the innocent. But the friends Philip had hired for the job were actually wealthy criminals. They now demanded that Brian would work for them. Philip, who refused, was pushed into the experimental ray apparatus that was set on Brian for reviving him. Both got struck by the beam at once and the criminals escaped.

When Philip came to his senses he could control the actions of Brian who still was in coma. Philip could also control Brian to do various amazing mental feats such as telekinesis. The first task that Philip sent Brian to perform was to kill the criminals that had escaped and that was how the case started.

Spidey and Dr. Strange broke loose and fought the Wraith. During the fight Iron Man, who had been devising a gadget that could defeat the Wraith, arrived. Iron Man managed to put the Alpha-blocker he had built onto the head of Philip DeWolff. It did break the mental contact between father and son. Without commands, the Wraith fell unconscious to the floor.

Then came the trial, which the heroes attended. During the trial Philip mentally controlled one of the guards, even though he was still carrying the blocker, into shutting the blocker down. He immediately retained control over Brian. However, both of them managed to touch the electrical apparatus at the same time when it short-circuited.

This resulted in Philip also gaining the abilities that his son had. Philip could still control his son too and although the heroes defeated Philip, his consciousness still was residing within Brian.

The Wraith almost defeated the three heroes, but ultimately lost. Dr. Strange then removed the mental connection the two had and tried to wake Brian back to full consciousness. With the help of Brian’s own will this attempt succeeded and Philip lost his powers.

The trial continued and in the end, although the judges didn’t believe mental control possible, Brian was freed. Philip found guilty of charge and sentenced to jail. In a strange epilogue the judges themselves were shown possessing mental powers (!).

Brian went on to become a costumed adventurer and moved to San Fransisco. He later helped Iron Man again in a case.

When Brian’s sister Jean DeWolff was shot to death by the vigilante known as the Sin-Eater, Brian went back to New York. But on arriving at a New York City police station in costume to begin his assault (since he believed all the NYPD to be responsible), the Wraith was himself shot dead by the vigilante Scourge.

The Wraith had a well developed musculature and wore a full body costume.

The skintight costume was all colored purple except for two vertical stripes of yellow from the boots to his neck. He also wore a purple hood, a set of yellow gloves, yellow boots and a yellow mantle. His eyes were completely white in this costume giving him a somewhat “wraith-like” appearance. On the right side of his waist he wore a yellow gun holster.

Early versions of the suit had the yellow parts in red and the mantle in black.

Brian DeWolff alias the Wraith was a nice, good and determined guy. He apparently believed that his powers gave him a great responsibility although he still was a reluctant hero. His sister was very important to him and he went into a rage when she was killed.

Before he became the Wraith he was a police officer who fought hard against criminals and really believed in what he did. Him becoming the Wraith didn’t much change his personality. In combat it was common to use illusion to perform normally impossible deeds and to hinder the opponent to really locate his true physical position.

“Challenge me if you dare, heroes ! I’ll turn your senses against you and you’ll become like mindless hulks !” (under Philip’s mental control)

He’s pretty powerful, but inexperienced. He could be inserted as a novice hero that doesn’t know how to use his powers to their full potential, but that would be pretty boring. His origin could be kept as is, but instead changing the DeWolff family into some other famous police family of the DC Universe.

The Gordons in Gotham City are probably the most famous and it could be interesting to have Brian be the brother of Commissioner Gordon’s daughter, Barbara (earlier Batgirl, now the ’superhero’ Oracle). Actually he could have raged into the police station in Gotham after Barbara had been shot by the Joker…

Bonuses and Limitations:
Control is only usable against any single individual.

Drawbacks:
Public Identity, Attack Vulnerability (Extremely susceptible against the mental commands of his father (-2 CS OV/RV against such attempts)). 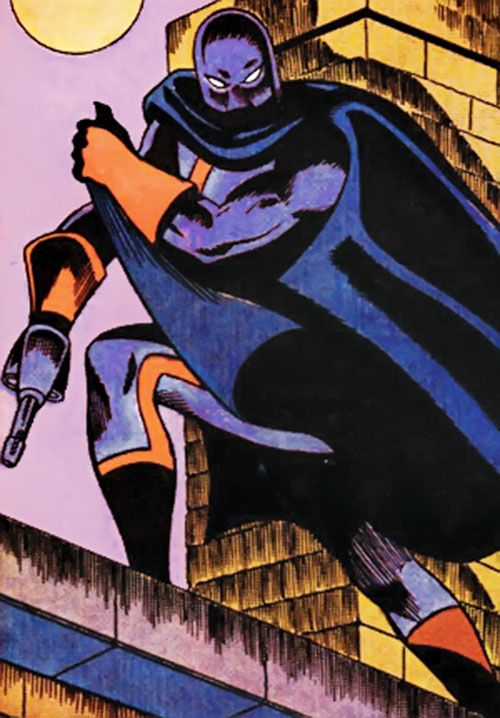