The chess board is the world… the rules of the game are what we call the laws of nature. The player on the other side is hidden from us.

The Wrath was a notable stab at the “anti-Batman” or “reverse Batman” concept.

He only appeared once, in the 1984 Batman Special. However:

The Wrath apparently had a similar set of skills and capabilities as the Batman (Bruce Wayne). Stealth, martial arts, acrobatics, athletics, intimidation, strength and endurance, interrogation, detection and deduction, etc..

He genuinely could fight the Batman toe-to-toe. Making him one of the greatest fighters in the world.

The Wrath had more of an emphasis on assassination techniques, and used completely different weapons :

He apparently built his own weapons. And it is likely that his utility belt had more gadgets on it, much like the Batman’s. 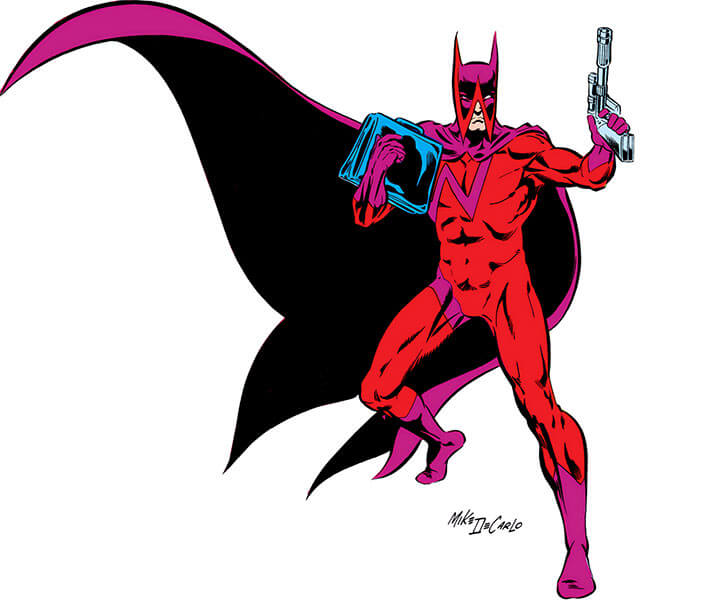 The scoped handgun — his main weapon — is curious.

It was drawn more like, well, a Star Wars heavy blaster, really. With an optic sight that may also have night vision capabilities.

We can see that it’s a repeater, likely semi-auto, and has a capacity of at least four shots. So it’s not built along the lines of rifle-calibre scoped hunting handguns such as the Thompson Contender or the Tanfoglio Thor.

Furthermore, its round could be stopped by a 1980s bulletproof vest. And it didn’t have the ballistics to guarantee a kill at a 50-to-100 metres range.

So I’d hypothesise something like a target pistol (say, an Hammerli or Pardini model), rebuilt and rechambered for hand-loaded .357 magnum match-quality ammunition. It’s a good calibre for a 1980s story.

However we can see a curved removable magazine sticking out of the pistol grip. So who knows.

The thrown incendiary charge was also intriguing. It’s impossible for it to contain enough chemicals, yet it could set fire to a mid-rise building if well-placed. Perhaps it was reverse-engineered from Apokolipsian weapons once used by Intergang ?

Something to evoke 1984, lessee… Y’know what, Corey Hart’s hit “Sunglasses at night” springs to mind.

The synth-and-guitar-heavy music, and the video’s aesthetics, strongly state “1984”. And that combined mood is an excellent fit for that Batman Special issue.

Plus the tune didn’t age badly. Unless of course the 1980s power pop/hard rock fusion isn’t your thing.

The Wrath’s parents were professional thieves in Gotham City. One night, while they were doing a simple break-in-and-snatch job, their eight-year-old son stealthily got up and followed them.

(That he wasn’t supposed to be there is a retconMaking changes to a character or story after the fact introduced in the Wrath’s Who’s Who in the DC Universe page.)

However, the theft went sour. Rookie patrol officer James Gordon spotted them, and returned fire when the man shot him. Both burglars were killed, even though Gordon’s shots were unaimed, reflexive ones.

The shocked kid was easily found. He grew up in the catastrophic Gotham City system of foster homes, reform schools and juvenile corrections.

To endure this, he worked on becoming the toughest criminal he could be. And to break the system trying to break him.

Killing in the name of

The youth was extraordinarily successful – in that he became a nearly unstoppable fighter and planner. He eventually developed a costumed identity as the Wrath.

Now a master assassin, the Wrath launched a bloody crusade against law enforcement. For years he murdered influential lawmen in the US, in the UK, and perhaps beyond.

In 1984, he returned to Gotham. His endgame there was to kill his most hated target – James Gordon, now the Police Commissioner.

Those who died are justified

However, the attacks killed multiple officers. This forced Gordon to accept Batman’s offer to actively hunt the Wrath down.

Meanwhile, the Wrath had fallen in love with one Grayle Hudson. She was the daughter of a gang boss. Jack Hudson had sworn that he would leave the life for his family’s sake, but was murdered before he could make good on that.

Grayle hired the Wrath to rub out her father’s killer. The couple then agreed that, once the Wrath had killed Gordon, he would retire from crime so they could live together. 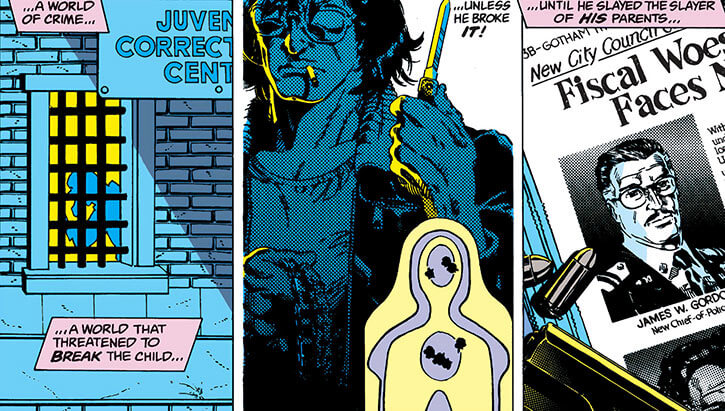 The Wrath decided to kill Gordon on the 26th of June, the day his parents had been killed. And he randomly learned that Batman would come to Crime Alley every year on the 26 th of June.

On a hunch, he investigated – and intuited, based on their similarities, that Batman was Bruce Wayne. To send a message, he smashed the tombstone of Thomas and Martha Wayne, and left a spray-painted demand to surrender the Commissioner.

Meanwhile, Grayle used her underworld contacts to locate Gordon’s hiding place. She had a bad feeling about the Gordon hit, and feared she’d never get to elope with the Wrath.

The Wrath beat up Alfred Pennyworth then kidnapped Leslie Thompkins, to force the Batman to surrender Gordon. This worked – though in the meantime Wayne interrogated Grayle Hudson.

The Wrath also shot Gordon, and was briefly fooled. The commissioner was wearing a strong undershirt vest with squibs, making it look like he had been slain. From the Wrath’s words, the Batman realised that his opponent was out to avenge his parents.

The two fought, and the Wrath was accidentally slain. As the Batman walked away, Dr. Thompkins comforted a shocked Grayle Hudson.

The story went long on the similarities between the Wrath and the Batman.

Notably, them losing their parents in comparable circumstances on the same day. Or their costumes having the exact same silhouette, making it easy to confuse one for their other if they stuck to the shadows.

So it would be but a small step to hypothesise that something mystical was going on. Mayhap a Lords of Order vs. Lords of Chaos thing.

While care should be taken not to cheapen the published story, it’s clearly an angle if you want to bring the Wrath back for some reason.

My vague sense was that the Wrath was going for a Devil symbolism with his red costume.

The few shots of Wrath out of costume are a typical 1980s bad boy tough guy look, very similar to Cobra. 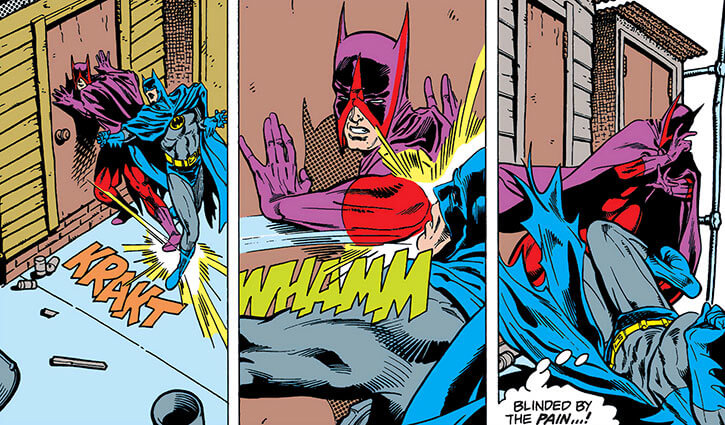 Every bit as much of a crusading obsessive as Batman, and as traumatised by the death of his parents.

The Wrath kills at the drop of a hat – even mere witnesses. He might leave certain ancillary targets alive though, if he thinks he might need them as hostages later on.

I had this weird idea where the Wrath is actually the protégé of the Black Widow (Claire Voyant), and it turns out all the senior cops he’s killing were part of a strange, horrific magic pact made at an experimental international police academy 25 years before.

And then there’s a weird Steve Englehart storyline where Nighthawk (Kyle Richmond) and Valkyrie (Brunnhilde) do deep detective work to expose what took place back then, which involves the Sons of Satannish.

The Wraith might be a good fit for Captain America (Steve Rogers) – Flag Smasher (Karl Morgenthau) always made me think of the Wrath.

An interesting twist might be to make him a reflection of Bucky Barnes when he was the Winter Soldier. Making the Wrath more heroic during this time. Perhaps his parents were killed by the Winter Soldier instead of Gordon? 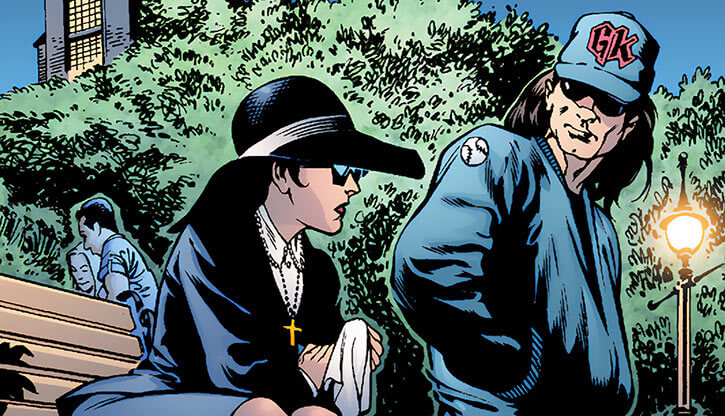 Meeting Grayle Hudson to talk about a contract.

Another time, another universe…

The Wrath story was revisited in a 2008 story arc in Batman Confidential by Tony Bedard, Rags Morales et al. Which :

We (I say “we” since I wouldn’t have found this story without our contributor Kevin) will, however, keep the data from this story in this here separate section.

Because it takes place post-Infinite Crisis but pre-Flashpoint. So nobody knows which elements were valid when.

(It also means that both the Wrath and Prometheus existed on the same Earth, which is kinda weird.)

On the bright side, this means that the 2008 material can be treated as a buffet. You can pick and choose what to use.

From there he started to constantly train and work out to become a professional copkiller. And/or a hitman specialising in killing cops.

In this version, the delay between the first attempt to kill Commissioner Gordon, and the final fight, spanned months. The Wrath became utterly obsessed with Batman, and decided that he would have everything that Batman had. Including a utility belt, a supercar, a raspy badass he-man voice… and a sidekick.

After the Wrath’s death Grayle Hudson went on to work with Dr. Leslie Thompkins. Perhaps as an administrator. Her reputation as a mob princess helped convince criminals to leave the street clinic alone.

When he decided to have his own Robin, the Wrath went through five orphaned boys. Four were slain in sequence by the training and brainwashing he inflicted upon them. But the fifth, Elliot Caldwell, survived.

The sidekick may not have been deployed before the Wrath’s death. Even Batman was unaware of his existence. But the murderously conditioned Caldwell — who had been given a new, unrevealed name by the Wrath — continued to train.

He would eventually become the second Wrath – and just as skilled as his mentor.

His goal was to kill Gordon, Batman and Robin — who had since become Nightwing and was now leading the late 1980s Teen Titans.

During this story, the new Wrath uses equipment that likely also was on the original Wrath’s utility belt :

A “Wrathmobile” was also built, but likely never used. From the art, my sense is that the car itself is a typical 1980s off-road monster truck – this is when the concept became popular.

But some of the equipment seems more modern, and may have been added during the Batman Confidential story.

The truck was something like STR 07 BODY 07, Running: 07 and armed with an array of machineguns, rockets and perhaps flamethrowers. It also had a winch, because 1980s. Unexpectedly, it could be remote-controlled.

Its exact size varies in the art. But the huge tyres and heavily reinforced chassis allowed the truck to ignore common obstacles, such as other cars.

The new version of the Wrath handgun *may* have been a radically cut-down Galil assault rifle. Using the same techniques to turn M16-type rifles into “pistols”. 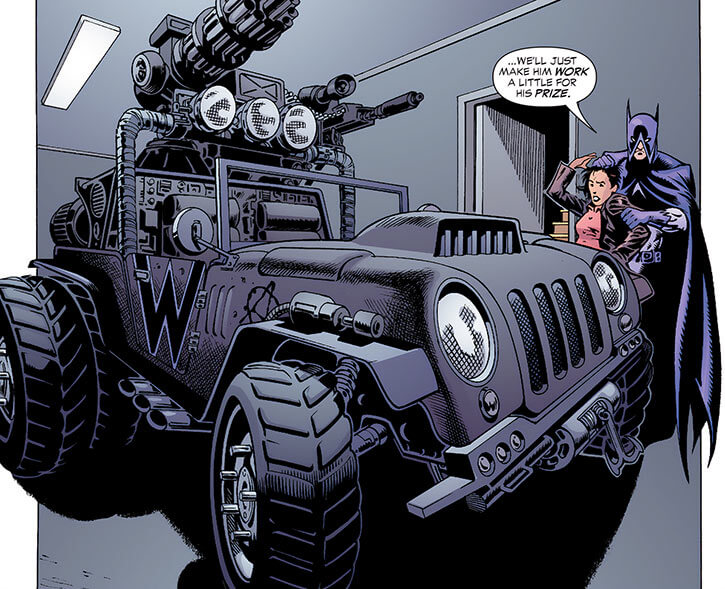 The “wrathmobile” seen in 2008. On this page, it is more Jeep-sized than monster-truck-sized. Note the revised costume palette, used by both the 2009-revised Wrath and Robin!Wrath.

However, in this case :

So I went for parity in immediate combat skills. Then used Batman as a template, with slightly lower levels, for the rest.

The latter APs are still high enough that in most circumstances, the difference between the Wrath’s and the Batman’s scores ain’t gonna be material.

The low-balled Gadgetry that gets upped by the Expertise is because his explosive charges seemed much deadlier than the kinda underwhelming signature handgun.

Speaking of benchmarking, I’m using the stock 2ned Edition Batman stats. With the big 10 in DEX and everything.

I *think* that these are about right for a mid-1980s Batman story by Mike Barr, on the strength of semi-recent 1980s Outsiders research.

Except for the 150 Hero Points, which are more of a marker of Batman when he operates with the JLA or Superman. In most Gotham and Outsiders adventures, the bat of that era seems to have about 100 HPs.

The Traumatic Flashback is assumed, rather than demonstrated. The CIA also isn’t 100% demonstrated, but it’s reasonable given his demonstrated behaviour.