Sanders is a genetically engineered cyborg, a human/rodent hybrid. He possesses :

The Bloodpool project was certainly not the finest moment of the US government’s special projects involving superhumans.

About 20 nu-gene active teens were recruited from their families, prodded, tested, operated on, genetically and cybernetically enhanced, and subjected to a dangerous and gruelling training. The promise was that they could one day join the prestigious Youngblood action team. Youngblood was both a powerful combat force and an efficient media tool for the government.

However, Youngblood’s director Graves was discovered to be a demon. Which was an issue. During the upheaval, the new director, Battlestone, decided to forego the Bloodpool contracts. Despite all the promises and all they had been through, the Bloodpool subjects were downsized. 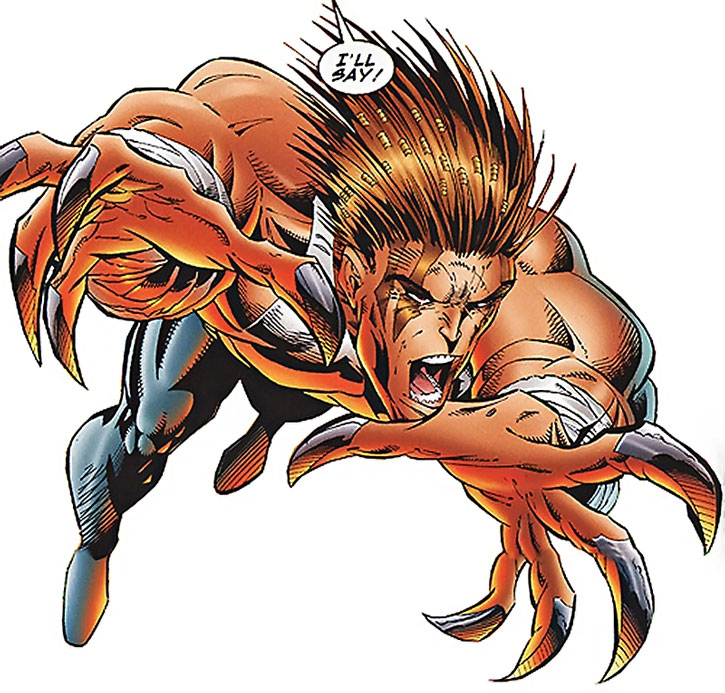 A few trainees (Task, Psilence, Wylder, Fusion, Rubble, Seoul) chose to follow the advice of one of Seoul’s spirit guide. With the support of former Youngblood leader Shaft, they struck on their own as a private, hero-for-hire outfit.

An early, lucky meeting with a millionaire in an unfortunate situation bankrolled them. And thus the group, which kept the Bloodpool name, soldiers on.

Wylder loves to talk tough, and puts on the appearance of a grim, proud, threatening Bronson/Eastwood take no prisoners type.

However, while ferocious and confident when he and his party have the upper hand, he becomes very cautious when things turn sour. He’ll often suggest retreat or holding back.

He’s closest to Fusion, as they often jog together. Fusion being much more sensitive than Wylder, Sanders enjoys startling him in word or deed with his attitude.

“We could always avenge the hostages afterwards”…

“Want to see your intestines ?”

Drawbacks:
Minor Rage (goes up to Catastrophic when cornered, +10 pts).