Wyynde is a powerful and skilled fighter, as well as an outdoorsman.

He’s highly skilled with the sword, the bow, the blaster  and other weapons.

Wyynde was born 45,000 years ago in the land of the Khe-Wannantu (a people who greatly resembled the American Indians that would come much, much later). He was the son of their dhonu, or king. Being adventurous and not wanting the responsibilities associated with his birth, he fled his homeland. Wyynde eventually became a soldier for the City of the Golden Gate in Atlantis.

Wyynde was a member of the patrol led by Lady Chian when they clashed with a group of submen. Wounded by the submen’s arrows, separated from his fellow soldiers and blinded by the glare of the sun on the snow, Wyynde was going to meet an early death.

This is when he was mentally contacted by the sorcerer Calculha. The wizard was looking for someone to help him resurrect his son Ahri’ann, who had been transformed into energy 100,000 years before.

The blind Wyynde fetched a blood red gem in which Ahri’ann’s essence had been collected, then set it atop an ancient pyramid. This returned Ahri’ann (whom Wyynde called Arion) to human form. It also cured Wyynde’s blindness.

Thus Wyynde became one of Arion’s most trusted companions, along with Lady Chian and the shapechanger Mara. For a time, Wyynde and Mara were an item.

However, his adventurous years seemed to come to an end when his father died. Wyynde came back to the Khe-Wannantu to become dhonu. He married Fawndancer, a Khe-Wannantu who had been pledged to him before birth. However, Wyynde’s reign was brief. The Khe-Wannantu land was sunk beneath the seas by Arion’s evil brother Garn Daanuth.

The only survivors were Wyynde, his brother and his wife, the later of whom was turned into a creature of the seas. The greatly distraught Wyynde was then mentally possessed by Daanuth for a time, and mentally snapped. Thus greatly diminished, he was later genetically reengineered to become a beastman. But Arion restored his friend to his true form and to mental health.

Wyynde survived the sinking of the City of the Golden Gate, but his ultimate fate is unrevealed.

Compiled by Sébastien Andrivet (stats from Atlas of the DCU, history from Who’s Who). 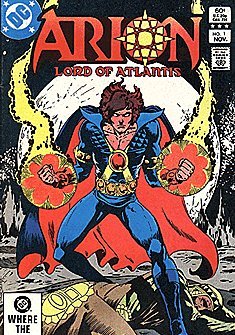