Nate Grey is a mutant possessing vast psionic  abilities and is possibly the most powerful psionicist on the planet. He’s well versed in various mental powers and regularly pulls tricks that is normally not considered possible by other telepaths.

Nate has shown telekinetic ability rivalling that of Phoenix, creating destructive psionic spikes, and lifting objects of at least 10 tons.

Nate is also a telepath of the first order, able to create psionic illusions, read, probe and control the minds of others, and to pull a psionic entity out of the astral plane.

It is possible that, with practice, Nate Grey could be the most powerful psionicist on the planet.

Unfortunately, his powers are so powerful that he often has little control over them and their continuous use actually slowly are killing him (Power Reserve is used very often). Powered combat exhausts him (and sometimes forces him to do Desperate Recovery Checks).

He’s also well trained in hand-to-hand combat and athletics and thus sometimes chooses to enter physical combat instead to surprise opponents or to save his energies.

Nate Grey is a young man in good shape. He has light blue eyes and red hair, except for a white stripe at the front. His left eye glows when he is using his powers.

He’s seen in either the sleeveless, yellow and blue leather jumpsuit, with a blue jacket, that he brought with him from the world of the Age of Apocalypse or standard, but trendy clothes.

He is also very fond of black leather clothes and prefers to go with bare feet.

Visible energy is leaving him when he’s using his powers, sometimes even on very low default levels. This crackling energy is usually colored yellow, orange or red and resembles fire or lightning.

Later on, he’s seen with his hair shaved off at the sides and wearing a tattooed black circle surrounded by black triangles, giving it an appearance of the sun, and with a white X letter in the middle, on the right side of his chest.

Since using his powers is really taxing his body, he is also sometimes seen with a nosebleed (always after having used Power Reserve). And by the way, his biosignature is almost identical to Cable’s.

Nate is a heroic, but angry young man seeking a place in an unfamiliar world. He is a firm protector of the underdog, although his methods are somewhat violent for the standards of society in our world.

As Nate was the product of cloning and accelerated aging, he has not had a traditional emotional development. As such, he has never made any place for yesterdays or never made any room for tomorrow. He expects to die young, although he really does not want that, out of using his powers.

His subconsciousness has sometimes turned off parts of his powers as a last way of conserving his energies so that he might continue to live.

Thus, he has often been his own worst enemy, jeopardizing his life when locking out the use of his powers at critical points in time. He has also many times been responsible for creating both menaces and miracles around himself subconsciously ; these effects, however, always end up giving him troubles later on.

Also lacking any real parents, which he longs for, he subconsciously resurrected Madelyne Pryor, a carbon copy of his clone mother Jean Grey, so that he’d at least have her as a substitute for the real thing.

This is interesting, since Madelyne Pryor is not really his mother, but the mother of his real life counter-part Cable (Cable and X-Man have the same father, but different, although genetically identical mothers). Pryor, the former Goblin Queen, of course, was a great threat to everyone, which is something Nate blames himself for.

Pryor could have been the greatest friend he ever had or his worst enemy. At first she turned out to be the latter.

Later when Madelyne seemed to be a genuine friend, Nate had trouble with trusting her (Nate has troubles trusting anyone at first), although they remained good friends. Nate really would have wanted Jean Grey to be his real mother.

Nate sees himself as a younger version of Cable, but expects to live a freer and more actively involved life than him.

Other solutions to his problems are that Nate sometimes has discussions with holographic versions of his friend and himself to sort things out.

He often thinks about his place in things ; that he doesn’t really belong in this world, or does he ? He longs for his friends left behind at the Age of Apocalypse. His status as an ultrapowerful, independent telepath has left him the prey of many a hunting, ranging from Sinister, Apocalypse, the Sugarman, the X-Men etc.

Nate is, due to an early encounter gone horribly wrong, on bad footing with the X-Men and Professor X and will not contact them regardless of the situation, even though they would help him out given the chance.

According to Nate the X-Men use soft-line policies, rules of engagement and regulations of honor that do not really cut it for someone who has lived out the worst of possibilities. He’s willing to work with more extreme groups, however, and isn’t really a loner by heart.

And he will help strangers any time, particularly kids.

Nate often does things just to spite someone, even himself (such as resurrecting yourself when you really should be lying dead just to show yourself that you can do it). He’s a good kid at heart so this is not for evil reasons, but just to prove the point.

Being an outcast, he cares for other outcasts such as Threnody, with whom he wanted to create an illusion of an ordinary life. Still, all such hopes are always squandered by him being hunted by someone, being recruited by someone or then he has huge problems with his powers that threaten his life or those around him.

Nate has spent some time among homeless people helping them out in various ways as well since they too are, in a way, outcasts like himself.

Nate often visits the Washingtone Square Park in New York’s Greenwich Village to play host to an eclectic crowd of city dwellers and tourists alike and help them out as needed using his psi-talents. This activity provides Nate with a refuge and a sense of purpose.

“My telekinesis just sheared down through a 130 feet of dirt and rock, smashed through 4 more feet of solid brick and mortar and pulverized it all in mid-air, right before your eyes. Let’s take a minute to imagine what it could do to you.”

“Option Three. ‘None of the Above‘. There’s always an option three.” (doing things his way)

“Turn around, you maggots ! I don’t know what your gripe with the girl is, but if you work for Sinister, then I got just one question! Where is he ?! He’s responsible for countless deaths — including my friend’s !” (talking to the Marauders)

Holocaust: “At last, Grey, destiny is here. Sinister may have made you to destroy my father, but he couldn’t have known about me !”
Nate: “Yeah, well, either that, or he didn’t consider you much of a threat.”

Building off of the disastrous experiment that created Bizarro, Project Cadmus manage to splice some of Superman’s DNA into that of a human being (either Lois Lane or Lex Luthor himself). The result was Nate Gray.

After the death of the Man of Steel he was freed from Project Cadmus by the new Newsboy Legion and took up the mantle of Superboy.

After Kal-El returned to life the first meeting between the two went bad due to mutual distrust and misunderstanding. When he finally realized that the one, true Superman had returned he began questioning his place in the world and, to symbolize this, changed his nom de spandex to X-Man.

Drawbacks:
Forced Exile (Age of Apocalypse), Minor Rage, MIH (Apocalypse and Sinister), SPR (Use of his powers is slowly killing him), Hunted (Mr. Sinister & other fellow survivors of the Age of Apocalypse; Sugar Man, Holocaust and the Dark Beast), Mistrust, Unluck.

Nate Grey is a mutant of tremendous telepathic and telekinetic potential. He regularly performs stunts that other telepaths consider to be impossible and beyond the laws of physics. In game terms, his powers have a number of Bonuses.

In an effort to prevent his powers from killing him, Nate one time subconsciously closed his access to his telekinetic abilities. At another time he instead closed of all his telepathy-based powers. Losing either his telepathy or his telekinesis means that he loses a whole bunch of powers at once.

In game terms, Power Complication subplots are a rather common part of the character ; he either loses Telepathy or Telekinesis or is temporarily reduced to using half the APs of all Powers.

At other times, Nate has suffered from extremely poor power control. In game terms, he then had the following Misc. Limitation: At the GM’s whim Nate must pay a Power Fee of 5 HPs or he will suffer from very poor power regulation and control.

In such a case, all his Powers gain the Non-Variable Limitation until the fee is paid and Power Reserve has to be used whenever a power is used. When suffering from this condition he’ll almost always radiate energy around himself unwillingly (50 pts).

Although a GM has to remember that Power Complication subplots and other temporary Limitations are extremely common for this character, this write-up depicts Nate at his normal, full-powered high, when he’s not suffering from any power loss or reduction.

The Destiny of Nate Grey

Nate was created for one task only; to kill Apocalypse. As such, he has extreme power with little control over it. The energies he wields were never meant to be contained within a mortal shell. Nate wasn’t built to last, and his powers will eventually kill him (which is expected to happen around the age of 21 years).

This event happens with one final critical overload of deadly energies that will take out half the world when he dies. In game terms, this equals about 45 APs of the Bomb power.

X-Man of the Age of Apocalypse

After Nate had just been freed from the holding pens of Mr. Sinister, he had slightly different stats. In addition to the above, he had Serious Rage and Uncertainty. He was initially even more powerful ; each power was ranked at one CS higher than currently, and his Power Reserve was set at a full 12 APs.

He had much fewer powers at that point of time, however. He has since burned himself down, along with other Power Complication Subplots (Threnody, cutting off his own powers etc.) to current levels.

Combat on the Astral Plane

Combat on the other-dimensional realm known as the Astral Plane is engaged by entering the realm by use of the Spirit Travel/SL:Spirit Travel Power.

In the Marvel Universe, telepaths/mentalists can engage in mental combat there allowing them to use all of their powers, while being immune to all physical attacks (only Mental and Mystical attacks can be initiated).

The combat will visually appear, to the combatants and any onlooker, as if the Force Manipulation Power was used, even though Mind Blast, Mind Field etc. are really being used. 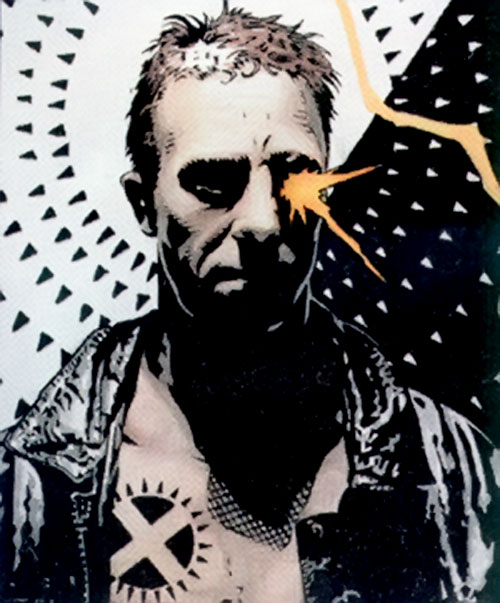 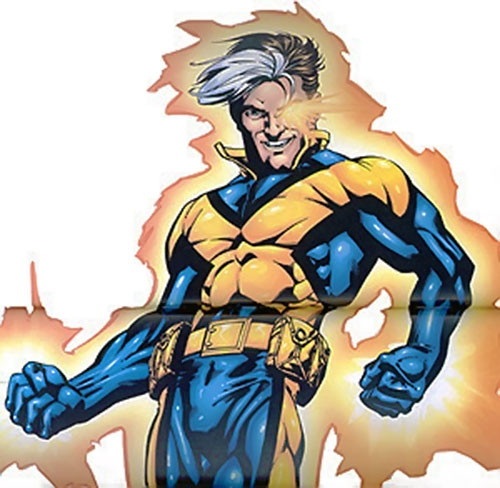 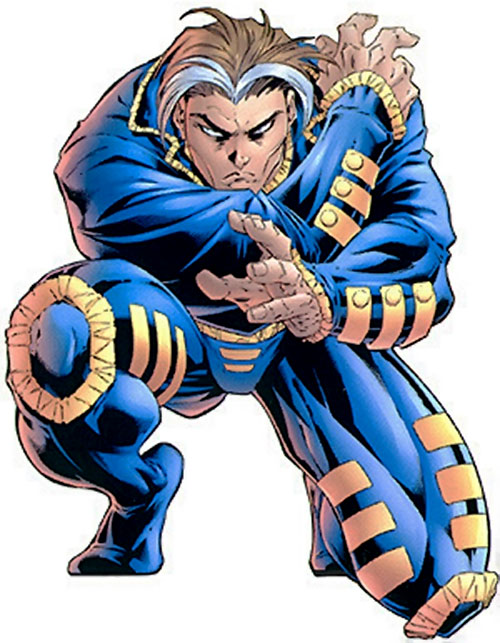 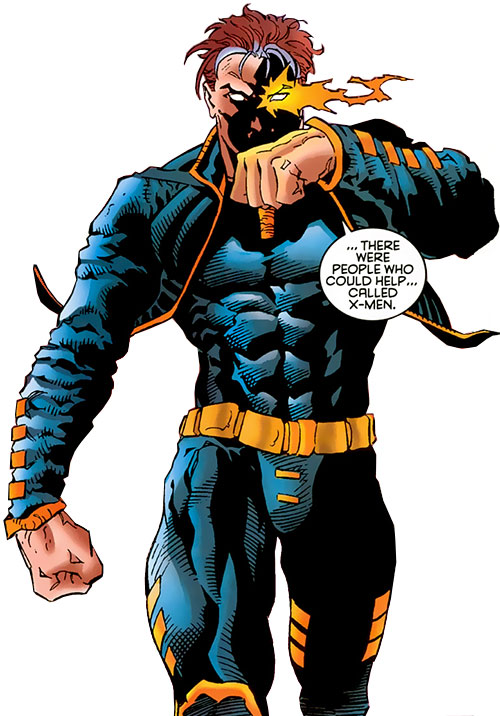