Xander has lived his entire life on top of the Hellmouth. Astoundingly, he has not only survived, but has managed to do so without having any superpowers or exotic skills, becoming evil, going insane, or turning out to be some sort of cosmic component to be protected or destroyed at all costs.

This is despite being found attractive by a series of extremely dangerous women:

Not to mention that he has been the first target of various mystical forces intent on destroying Buffy Summers. These ranged from the vengeful spirits of the Chumash Indians to Count Dracula, himself.

Born and raised in Sunnydale, California, Xander Harris went to Sunnydale High. So did his best friends Willow Rosenberg and Jesse, who he had known at least since kindergarten, with a hint of romance with Willow which he had always tried to avoid.

Xander also had an unspectacular family life, including (though not necessarily limited to) an unemployed, alcoholic father, a mother (very likely also alcoholic) unable a run a home (she frequently made “her famous call to the Chinese place”), and miserable holiday arguments.

Personally, the boy was an awkward teenager, but he was comfortable in his awkwardness, unlike Willow and Jesse. This was the status quo when Buffy Summers arrived at Sunnydale.

At this time, Xander was quite literally knocked off his skateboard (watching her, rather than the impending obstacles in his way). Xander and Willow became the Slayer’s first friends, and the three ended up entangled in a major vampire attack orchestrated to free the local “Vampire Master”.

The Master was stopped, though Jesse was first turned into a vampire, and then (semi-accidentally) staked by Xander during the final battle.

Since that night, Xander has been the loyal heart of the “Scooby Gang,” as the kids have come to refer to themselves.

For quite some time after that, Xander was by Buffy’s side in nearly every battle. That was despite being knocked out or aside by literally dozens of demons and monsters of various descriptions.

In the midst of chaos, he managed to forget his romantic feeling toward the Slayer and find a girlfriend: former social adversary, classic beautiful, rich snob, and “accidental Scooby” Cordelia Chase.

Harris found himself an improved man for the social contact, with both the group and Cordelia. However his relationship with Willow was temporarily strained. Still, Xander even helped the gang pull together and cover for Buffy’s Slayer duties when she ran away for a time.

However, his relationship with Cordelia was a relationship which ended with an indiscretion (a kiss) with long-ignored best friend Willow. After breaking up with Cordelia, Xander’s life spiraled downward. he returned to the awkwardness that characterized his early high school career.

Harris’s awkward days essentially came to an end, though, when he stumbled into a plot by dead classmates (raised through obscure entreaties to Uurthu) to destroy the school. He managed to foil this without the help of the “superheroes”.

Xander understood that he might not be the most powerful or competent of the group. But he was certainly capable of holding his own against menace.

Later that year (prom time, to be exact), Xander ran across another woman who likely could have been his arch-enemy. And yet she would quickly become the love of his life. This was the demon Anyanka. Or, rather, had been the demon Anyanka, who was accidentally summoned by Cordelia to punish Xander for cheating.

However, there was a mishap with Anyanka’s curse. Thus, she had been depowered and transformed into the young human woman she had been over a thousand years ago. And she didn’t have a date for the prom. Oh, right—And she was failing math.

Feeling sorry for the woman recently intent on destroying his life, he agreed to take her in. And, perhaps in the same spirit of graciousness, he paid for a dress that he knew Cordelia wanted, but could not afford due to an incident between her father and the IRS. Xander managed to follow all of that up with an impressive showing against the planned Ascension of Mayor Richard Wilkins.

Alas, things took a turn for the worse after graduation. Xander decided to use the summer (as he did not have the grades to continue his education) to see the country. He intended to take a road trip to all 50 states. While many would have been stopped by Hawaii, Xander’s car was stopped long before that. Oxnard, California, to be precise.

So, he washed dishes at the fabulous “Ladies Night” club for about a month and a half to pay for repairs. During this time, he apparently also had to substitute for one of the male strippers, a story of which no power on this Earth can force Xander to divulge details.

Upon returning to Sunnydale, he has since gone through a succession of jobs. Some were more demeaning and uninteresting than others. However, another life-transforming incident was on its way.

A random demon, intent on destroying the Slayer by splitting her into two component personalities accidentally split Xander in two, instead. While each was convinced the other was an evil duplicate, the “cooler” Xander managed to get himself… themselves ?… promoted and an extremely nice apartment, finally away from his family.

Upon returning to his singular self, Xander realized that the drive and intelligence had been a part of him all along.

He has since settled in as foreman at one of Sunnydale’s most prominent construction companies. He again helped to fill the void left by Buffy’s absence (this time, her death) — both her Slaying duties and her parental duties to sister Dawn. He participated in the resurrection spell which brought Buffy back, and gotten engaged to Anya on Buffy’s return.

In addition, he has also become reasonably friendly with at least two of his coworkers, Tito and Richard.

The engagement to Anya was also not to last. One of Anya’s former targets chose to turn the tables on the former demon, striking at her by destroying her wedding day. The villain posed as an adult Xander. He showed the real Xander a false vision of the future. Therein he became an alcoholic, abusive husband and father, not unlike Xander’s own father.

Fearing that this was a real possibility, regardless of the actual truth of the vision, Xander broke the engagement and ran off. Still loving Anya, he has tried multiple times to restart their relationship. But Anya has chosen to remain single, in order to find out who she is.

In the midst of this, Xander also proved, once again, that he is the heart of Sunnydale’s defenders. This occurred when, entirely on his own, without power or weapon, he prevented Willow Rosenberg from destroying the world.

His construction crews now man the newly-rebuilt Sunnydale High School on a daily basis, keeping it safe, and rebuilding the points of inevitable collapse. It is theorized that this one job could keep them in business until long after Xander’s retirement.

Xander is a mostly nondescript young adult. He’s shy of six feet tall, neither thin nor bulky, has slightly messy, slightly curly, dark hair, and the amount of stubble visible on his face varies.

Since leaving high school, his wardrobe has settled into more practical clothing.

To a certain extent, he’s become quite the hero in his own right. Though he claims that it’s all to help Buffy, his actions betray a deeper feeling. He believes in fighting for the same things that Buffy does.

This is especially evident at times when his plan of action differs from Buffy’s, and he argues for it. She may be his hero, but he realizes that she’s just as fallible as anyone.

As for his sense of humor, he can sometimes be more painful than Dick Grayson’s ever was. Sometimes it gets so bad that he can’t even believe that he said it…

Xander, however, does have a slight dark side. This comes out most often in his frustration, during the times when his fight for right is unsuccessful, and the time for humor has long past. At this point, he becomes a somewhat depressed, sarcastic figure, ready to verbally strike out at even his closest friends and physically strike out at the nearest furnishings.

Fortunately, it doesn’t take much for his friends to snap him out of this state, in general.

Additionally, he will defend Buffy to the death, when possible. Xander is almost always suspicious of any of her potential romantic interests, and to this day actively dislikes the vampire-with-a-soul Angel. This goes far beyond the jealousy it once was, and is very much in line with how a protective sibling might react. This will frequently manifest in awkward silence, though.

Finally, although he is extremely nervous and unsure about the where their relationship is going, he is deeply in love with Anya, despite (or maybe because of) her flaws.

“Yes. Men like sports. Men watch the action movie. They eat of the beef, and enjoy to look at the bosoms. A thousand years avenging our wrongs and that’s all you learned ?”

“You know what ? I’m sick of this crap. I’m sick of being the guy who eats the insects and gets the funny syphilis ! As of this moment, it’s over. I’m finished being everybody’s butt monkey !!”

“Work with me, British man ; give me an axe and show me where to point it.”

“I was going to walk you off a cliff and hand you an anvil, but it seemed kinda cartoony… I’m not joking. I know you’re in pain. I can’t imagine the pain you’re in. I know you’re about to do something apocalyptically evil and stupid and hey, still want to hang. You’re Willow… First day of kindergarten, you cried ’cause you broke the yellow crayon, and were too afraid to tell anyone. You’ve come pretty far. Ending the world not a *terrific* notion, but the thing is, yeah, I love you. I loved crayon-breaky Willow and I love scary, veiny Willow. So, if I’m going out, it’s here. You wanna kill the world, you start with me. I’ve earned that.”

I once suggested “old” Xander become a modern Jimmy Olsen. I still like that, but Xander has grown out of that, to a very great extent.

Today, he would likely have his own nationwide construction company, which specializes in repair work from damage due to metahuman and mystical conflict/ It wouldn’t be unlike the Damage Control comic. It’s likely, though, that he has also befriended many of the heroes, and so ends up participating in many crises around the universe purely by accident.

Currently, he is probably helping rebuild the outlying regions of Gotham City that haven’t been entirely brought back to the level at which they once were, and may also have a hand in the new Batcave.

Bonuses and Limitations:
Xander’s memory of his mystically-endowed military career appears to be inconsistent, at best. Xander, therefore, may not use his Military Science Skill or his Area Knowledge of the local army base without a per-adventure fee of 15 HPs. This also applies to Xander’s Weaponry Skill when the weapon in question is military issue (or similar). This may be paid at any time during an adventure, and lasts until the adventure’s conclusion. This fee may be subject to periodic increases, as Xander uses it less frequently.

Almost the reverse of an Irrational Attraction, all characters opposing the Conspicuous Target in combat must roll against the Target Number in the following table before declaring their action:

Wealth is an approximation. Luck is used for Xander’s typical “accident which saves the day.” DEX is low enough so that, even with HPs, he won’t be “action guy.”

I have also chosen to keep from designating the “Scoobies” as an official grouping, just like my “Group Affiliation” would not include my friends or coworkers. 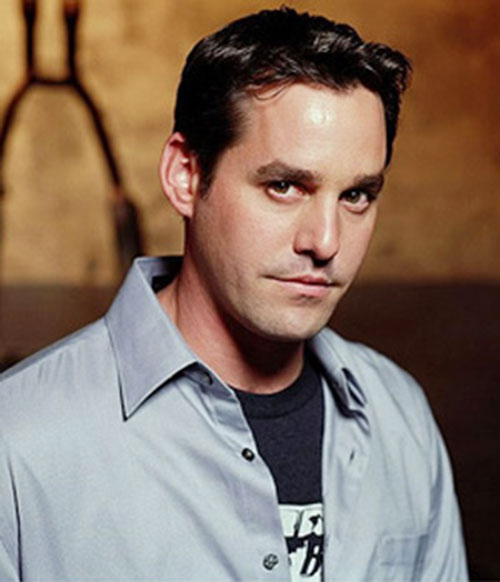