XCom is a series of video games from the 1990s and 2010s. It is about countering an alien invasion using elite military forces and scientific research.

Along with Annette Durand, Shaojie “Chilong” Zhang is a canonical XCom operative. He appears in the Slingshot DLC for the excellent XCom: Enemy Unknown 2012 remake.

Even if you’re familiar with the setting, we suggest to you first read our XCom Project article, since this profile refers to some of the proposed additional backstory in said article.

Zhang seems to be a real triad enforcer hardarse. He demonstrated :

One bets he has years and years of experience with the sort of stuff you see in high-octane Chinese crime movies.

After he joins XCom Zhang is deployed as a heavy weapons expert. He’s clad in heavy body armour, wields a machinegun and carries a laser-guided disposable rocket launcher.

He’s very professional with all of this. Furthermore, his great strength and endurance allow him to move swiftly and precisely even with all this gear. Thus, it’s probable that he has military experience. 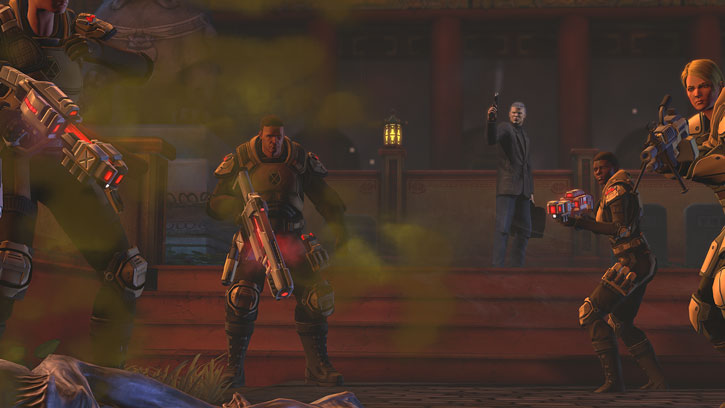 Cybernetic conversion turns the torso of the person into a melange of technology and organic reinforcements. The limbs are then amputated. The stumps get replaced by extremely advanced interface ports through which the soldiers will be able to command artificial limbs as if they were his own.

Off-duty, the soldier is issued advanced prostheses, which are simply plugged in. These arms and legs are clearly artificial, but they operate almost like organic limbs. Thus, they allow the volunteer to live almost normally once they have trained a bit in keeping their balance and in manual dexterity.

When the trooper gets deployed, these prostheses are removed. Instead, the torso and head of the cyborg soldier are lodged into a cradle within the torso of a large combat armature. The legs and arms of this mecha are far more massive than the prostheses, and it is heavily armoured.

The first generation of MEC (Mechanized Exoskeletal Cybernetic suit), the Mk1 Warden class, was being prototyped when Zhang volunteered. 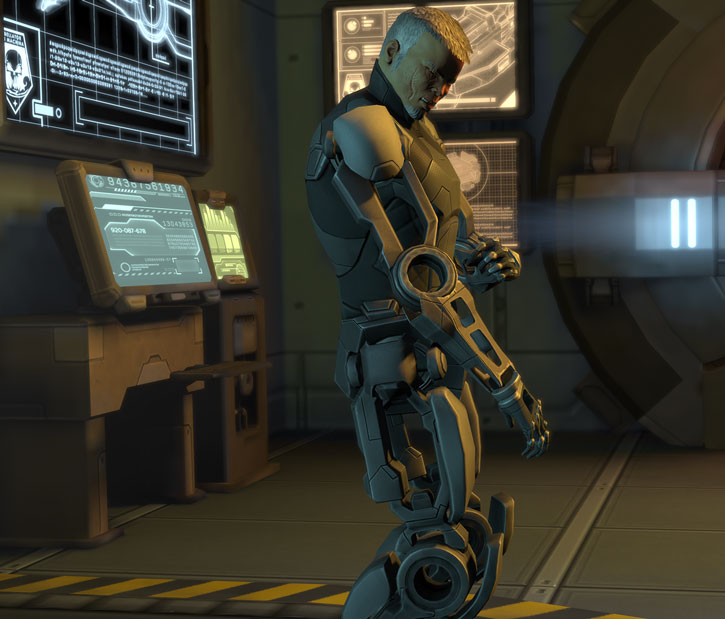 However, discoveries about batteries made when studying UFO power cells meant that no Warden-class suit was produced beyond the prototype Zhang used to train. When he returned to the field, it was with the first Mk2 Sentinel class “war body”. The former triad enforcer christened it the 龙新体 (Lóng xīn tǐ, or “new body of the dragon”).

This Mk2 Sentinel MEC suit has the following capabilities :

These are considerable improvements over what the Mk1 Warden would have been. The prototype Warden was an armoured but smaller exoskeleton with a 7.62mm minigun and a vehicular flamethrower (with limited fuel capabilities to avoid carrying a huge fuel cannister on a battlefield).

A third chassis class, the Mk3 Paladin, will eventually be developed. Along with even more powerful weapons, heavier armour, stouter psychotronics and other improvements.

As with most things in the 2012 version of XCom, the narrative is minimal. The only things we know are :

Filling in the blanks, part 1

Based on this we can imagine a few things to flesh Zhang out, though of course it is non-canonical. 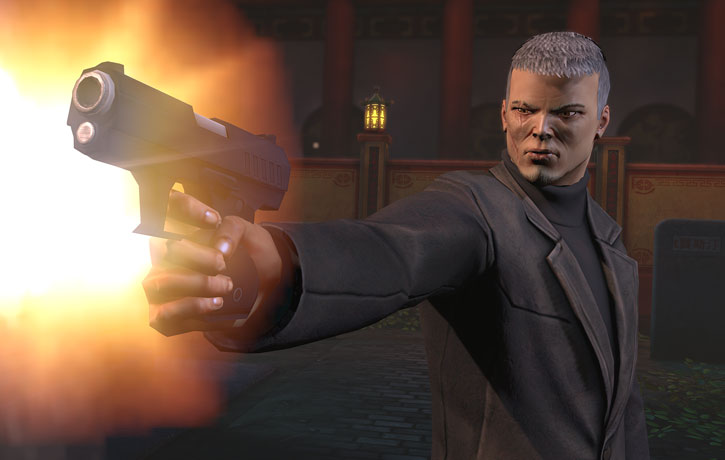 He was what triads used to call a 438 – a lieutenant with a specific area of expertise. In this case he was the chief enforcer and “special guy”, a role which involved assault weaponry on a fairly frequent basis.

Let’s say that his mob operated in Guangzhou for a change. And that he’s a former NCO in the Chinese military, who graduated to organized crime after making some handsome sums through corruption while in the service.

Perhaps the transponder was being placed by Sectoid aliens to guide a terror strike on Guangzhou, but the mob stumbled upon them. Though they suffered heavy losses, they killed the trio of aliens and took the transponders.

Filling in the blanks, part 2

By that point, the alien intrusions have been going on for weeks. The Chinese government having been part of the the XCom Project for decades, this knowledge spreads among functionaries as alien intrusions accrue.

The triad for whom Zhang works, being a major one in a huge city, has enough government contacts to learn about XCom. But they also know about EXALT, a shadowy and extraordinarily wealthy organization with ties to the aliens invaders. Zhang’s boss decides to sell their find to EXALT, as they are willing to pay far more than the XCom Project ever would.

Albeit loyal and disciplined, Zhang hears things, and comes to believe that EXALT are agents of the aliens. If he delivers the goods to the client, he’s betraying humanity for a quick buck – and cheapening the death of those made men killed by the aliens.

Filling in the blanks, part 3

As he arranges to contact the XCom Project via the Chinese government, Zhang knows that his life will soon be over. The triad is ruthlessly driven to punish traitors, never gives up and has global reach.

To further help explain why he so quickly volunteer to become a cyborg, we can add some Chinese crime movie drama. For instance his wife also is a triad assassin, and when Zhang flees she is forced to talk in order to save the lives of their two children. 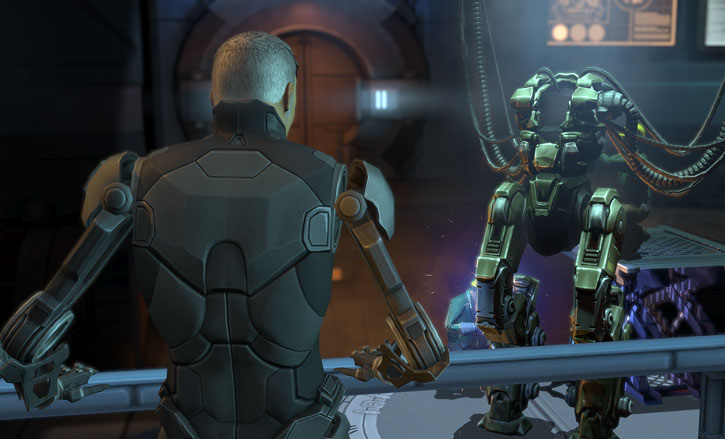 Now that they have been forced to betray each other, they’d be duty-bound to kill each other were they to meet again.

This would also explain why, in the video game, Zhang inexplicably throws his pistol away as the XCom team comes to fetch him.

In our version, the gun was a gift from his wife, and throwing it away as he take his first step toward the XCom tactical operators is a symbolic gesture during a very emotional moment. Especially since he arranged for the meeting to take place in a graveyard.

In-game, the head of a person in a MEC body is readily visible – most XCom soldiers operate without a helmet. We assume that this is purely for cinematography, and that everybody’s head is protected. Especially since in-game, MEC operators are immune to fire and airborne poison.

See quotes. In combat Zhang seems every bit as tough and professional as his new comrades-in-arms. 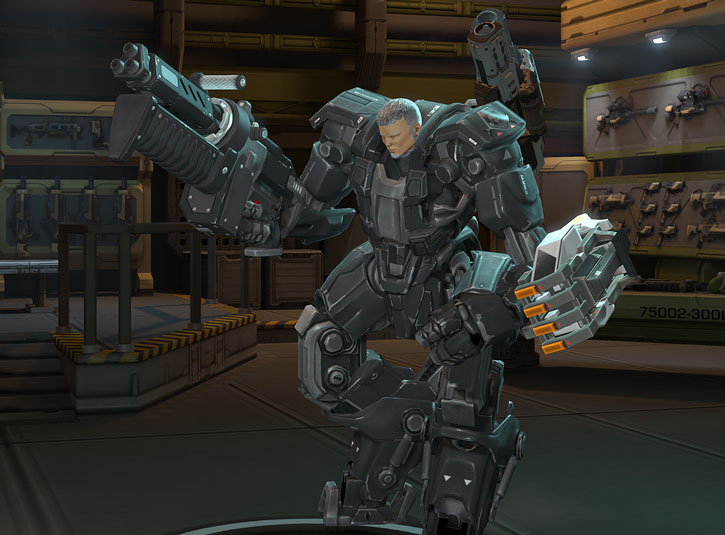 Mk2 MEC war body. At this point the main hand weapon still was a custom chaingun . Click for a larger version.

(After shooting his first alien) “Not so different from killing a man.”

“I’ve crossed many lines during my life, but now we all face a common enemy.”

“I’m alive… but the life I had is gone now. Funny, that my life should take such an unexpected path. Turning my back on old friends, to defeat a common enemy.”

Presumably a Human Defense Corps member, though he would now be Chinese-American rather than Chinese.

Equipment:
Zhang often joins XCom when it has not fully shifted to laser weaponry yet. Likely equipment is :

The Ultimax is soon replaced by a heavy laser, and the basic ARMOUR with a Carapace suit (see the XCom Weapons Locker article).

Soul of a new machine

After the cybernetic conversion, Zhang acquires :

The CPR is partially compensated by XCOM LIMB PROSTHESES [BODY 02 /DEX/ 02 /STR/ 02, Creepy Appearance Drawback], which at this point cannot be as strong or as fast as Zhang was in his meat body. 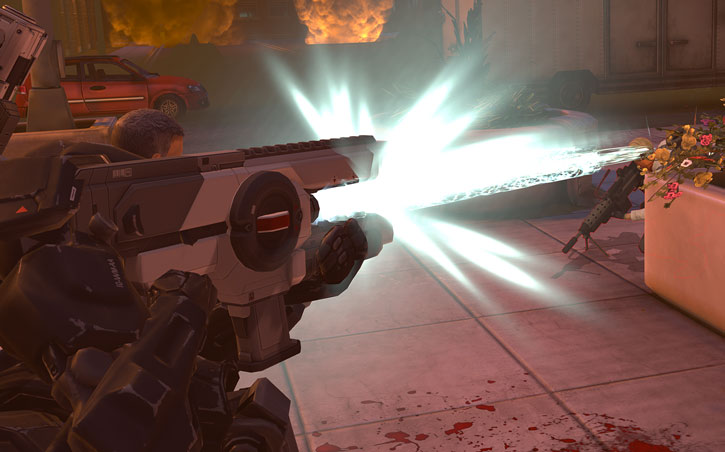 Firing a railgun in battle.

The specific mecha operated by Zhang has the following stats :
[/DEX/ 02 /STR/ 08 /BODY/ (Hardened) 09, Flame immunity: 02, Growth: 02, Kinetic Absorption: 02, Mental Field (Self Only): 01, Running: 04, Sealed Systems: 04, Limitations: Growth is Always On and Already Factored In; Kinetic Absorption only for impacts that can be absorbed with the legs (which normally means jumping down)].

It is equipped with the following : 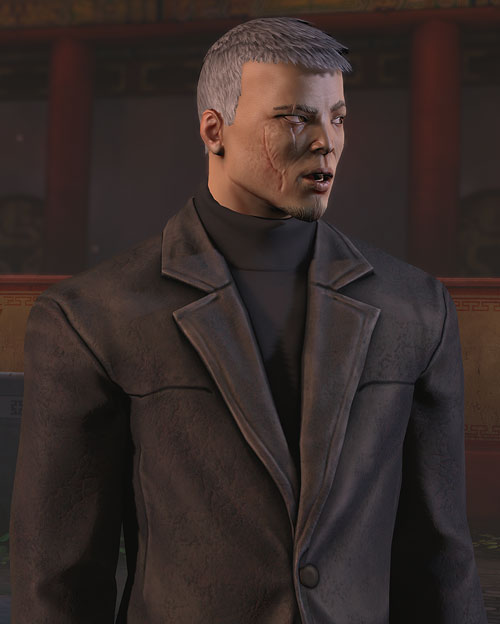 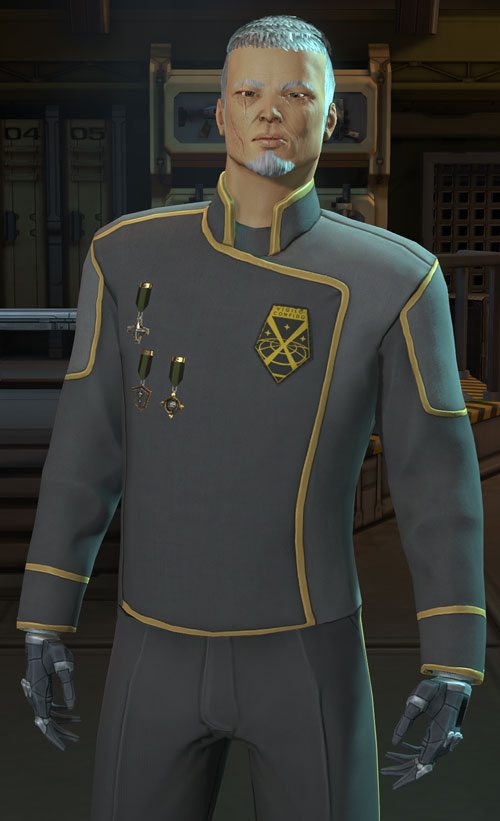 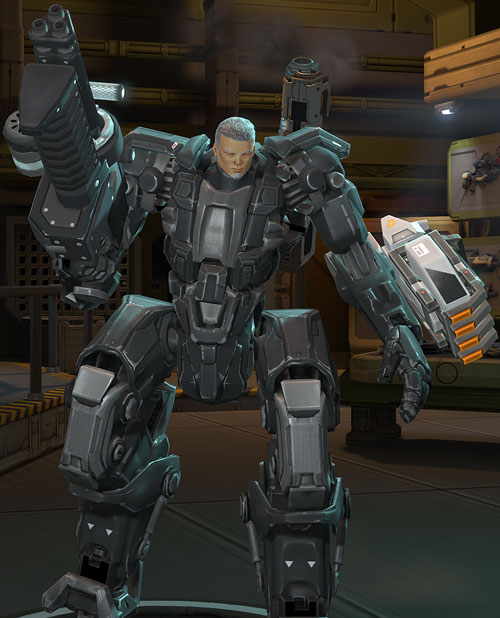 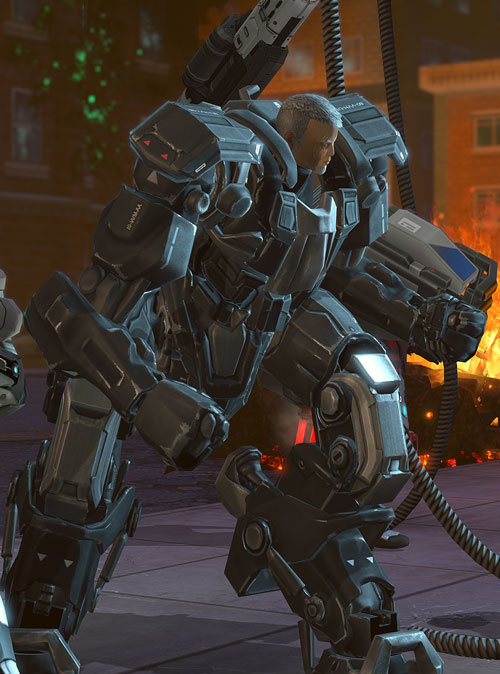 Left side and rear view: 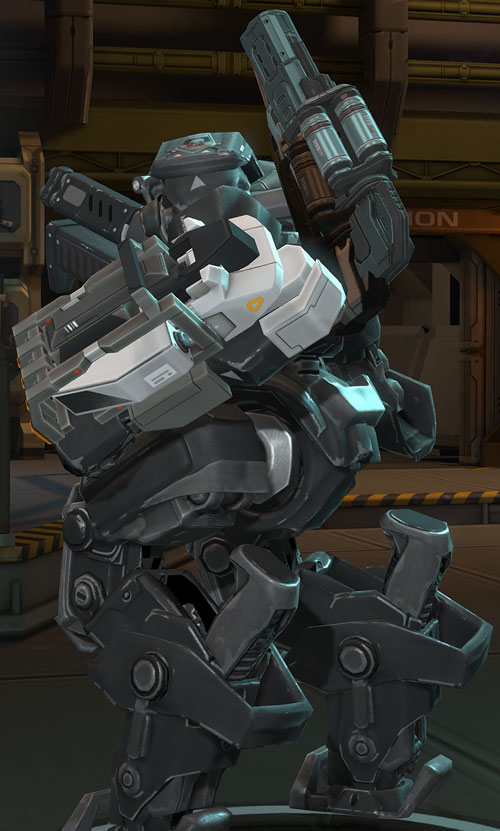