Xi’an was born with a scaly green right hand that causes matter to break down at the molecular level, destroying whatever he touched.

When he was wounded mortally at the Nuevo Sol gathering by Synge enforcers, his mutant biology triggered other facets of his powers. When seriously injured, Xi’an’s body will weave a cocoon- like structure made of a cuticle-like material which grows out, covers and seals the wound within minutes. He remains sealed inside until his wound finishes healing, which may be up to several days.

Xi’an’s wounding also triggered a second mutant power – the ability to heal with his left hand, which became golden and glowing. He can heal anything short of death, but pays a price in that he internalizes a person’s pain when he does so, and it drains him of his own vitality to do so.

He has used his touch to cure not only recent injuries but also to heal years-old injuries, diseases, and genetic defects like weak hearts.

Furthermore, Xi’an is a master hand to hand fighter, tactician, and a natural leader.

Xi’an Chi Xan was born in Reno, the son of a mid-level executive. He has been a mutant from birth, with a hand that can break down the molecular bonds in matter. He was sold to an Alchemax bioshop while still a child of approximately 10, but never made it there. He dissolved his chains and broke out of the transport, taking up living on the streets.

Much of the rest of his life is sketchy. It is known he associated with different gangs before he joined the Lawless, a group of fringe outlaws that pretty much controlled the area they based from. The Lawless eventually broke up under circumstances unknown, and Xi’an was forced to flee the country with a price on his head and Corporate bounty hunters on his tail.

He wound up in Saigon . There, while fighting for his life against speedster-assassin Quickdeath, he experienced an epiphany of all that he could become. Xi’an embraced the way of enlightenment.

He returned to the states in the company of Shakti Haddad, a mutant from Hong Kong. They set about building the new X-Men by recruiting mutants from the fringe. He eventually built up a team composed of:

The new X-Men set about to try to find what had happened to the mutants who supposedly survived the “Great Purge” of mid-century.

Eventually, in combat with Master Zhao — leader of the previous incarnation of the X-Men — Xi’an’s dark personality took over. He split with the group, leaving them to go their own way. Xi’an was then converted by the Theatre of Pain. He orchestrated one of their masterpieces; a symphony in pain broadcast over the entire world in complete sensory simulation.

This was when the X-Men caught up with him. X-Man La Lunatica, a psychic vampire on the run from the Theatre, used her powers against Xi’an. The psychic shock disabled Xi’an’s dark persona, allowing his other personality to become ascendant once more.

Rejoining the X-Men, Xi’an was a broken, defeated, and penitent man. As the X-Men took over the protectorateship of Halo City, the mutant haven created by President Doom, Xi’an worked in a local clinic. He pushed his healing power for all it was worth to do penance for his previous acts of violence.

Eventally, when his former allies in the Lawless were threatened with execution by the last Foolkiller, Xi’an broke out of his fugue state. He took command, and defeated the Foolkiller, apparently integrating his divergent personalities.

That was just in time for the series to be cancelled.

Initially Xi’an wore a black gi with a white wraparound belt and white leg and arm wrappings. he wore a glove on his right hand to hide his hand and protect things from his touch.

After his new X-Men went on the road, he took to wearing a desert-nomad looking ensemble. It was similar to his original gi, but in desert tan and brown, with short sleeves over a black tee-shirt, and with a drapery around his neck and shoulders. His leg wrappings and belt were gold. He wore black gloves on both hands.

When his dark persona took over, he switched to a futuristic black leather biker’s outfit with red accents, which I much preferred.

Xi’an is the Professor Xavier of his generation. As such he finds and brings together people from all genetic classes in harmony. Unfortunately, his brilliant mind hides a bitter secret : he is actually a split personality.

His original personality, built up over years of abuse and hard living, is the leader of the outlaw gang the Lawless. This Xi’an is amoral, driven to his own ambitions, and ruthless. He will do anything to get what he wants, and to survive. He once abandoned his lover Haiku to save himself when the gang was ambushed.

When this personality took over, Xi’an immediately abandoned the X-Men and began to pursue his own agenda, which eventually led him to the Theatre of Pain.

His “good” personality apparently took over in a moment of epiphany while the old Xi’an was fighting for his life in Saigon. This personality is calm, at peace with himself. He has a vision of peace and brotherhood of all men. He’s just slopping over with compassion and kindness. Kind of boring, though quite charismatic.

In fact, though he would never admit it, he occasionally lacks the drive of his “dark” persona. Think of Captain Kirk in the episode of Star Trek when he was split by the transporter, except not quite so bad.

In the final story arc before the title was cancelled, Xi’an finally had to embrace what his dark side had to offer, but did not allow him to take over (in fact, his dark side didn’t even make an appearance). His new personality seems to have the best of both sides: resolve, drive, compassion, vision, *and* the will to do what it takes. He finally found greatness.

Unfortunately, the 2099 series died soon after.

“No matter the curse or blessing of our genetic makeup… We must be willing to fight for our tomorrow… We travel a rough and treacherous road.”

The future-X-Men are kind of like the old X-Men. They’re fairly world-specific. See Kansas Jim’s Mutant History for details. However, if your world includes the mutant problem, they are just the future incarnation of a mutant equality team, just a little more activist.

Xi’an (aka the Desert Ghost)

Drawbacks:
Guilt (Actions as a Lawless member), MIA (To lead the new generation of mutants to realize Xavier’s dream), MIF (his own dark side), Mistrust, Dual Personality (see below), Public Identity, Traumatic Flashbacks (while having a crisis of faith, Xi’an often percieves his own opposite persona and argues with him), Creepy Appearance (Left hand is green and scaly, Right hand is golden, metallic and glowing).

Xi’an almost needs an Alter Ego to define his split personality. The problem is, apparently neither side of Xi’an’s personality can take over without the consent of the other. The first time, during Xi’an’s epiphany, he embraced what he could become.

Later, the good Xi’an gave up control to his “wild side” to save them both from mental domination at the hands of Master Zhao. The third and final time, the dark persona was traumatized so badly by La Lunatica’s psychic vampirism that it lost control and the good Xi’an resurfaced.

Basically, the GM controlling Xi’an’s plots needs to come up with situations where Xi’an will be stressed enough to consider allowing the other persona to take over. When these watershed moments come, the opposing personality will appear to the current personality and either offer to help or basically harangue the controlling persona.

The GM would play the part of the opposing persona until the switch actually happens. If this is too much work for the GM, just use standard rules for an MPI: whenever the roll is missed, the appropriate switch is made.

Xi’an changed the most of any character in X-Men 2099. When he began, he was the mutant cult leader. He did not have his Connections to Mama Hurricane and Desdemona Synge, He did not have Uncertainty or the SIF of his Dark Side.

After his dark persona took over, his Will and Aura increased to 12 and 09, respectively, and he suffered from a Minor Rage. His Motivation became Power Lust/Thrill Seeker, and he gained a Connection with the Theatre of Pain.

Eventually he became their Controller X (Ten), and in combat with Brimstone Love, his good persona took over again. His stats returned to normal, and he gained Uncertainty, and for a while suffered a seperate Guilt due to the pain he caused as Controller X. He also had a CIA to doing Penance for his acts in the Theatre.

Near the end of the series, Xi’an’s former Lawless partners were being hunted down by a Foolkiller, the last survivor of a fanatic cult the Lawless had wiped out. Xi’an seemed at this point to more or less regain his confidence in himself (losing Uncertainty), and seemed to integrate both his personalities into a more stable and cohesive whole.

However, it remained unseen if his “dark self” would surface again. 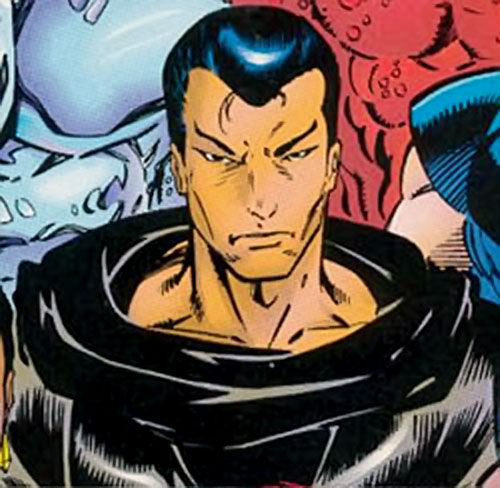 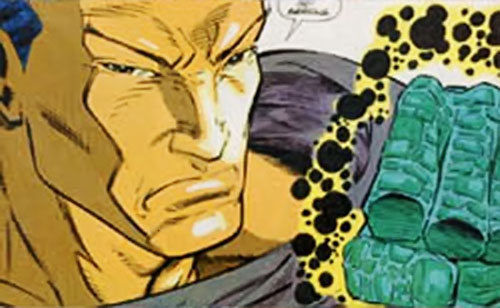 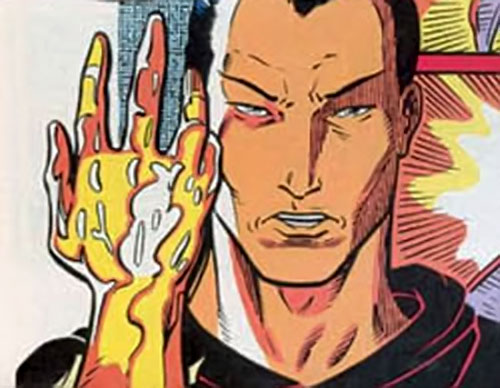 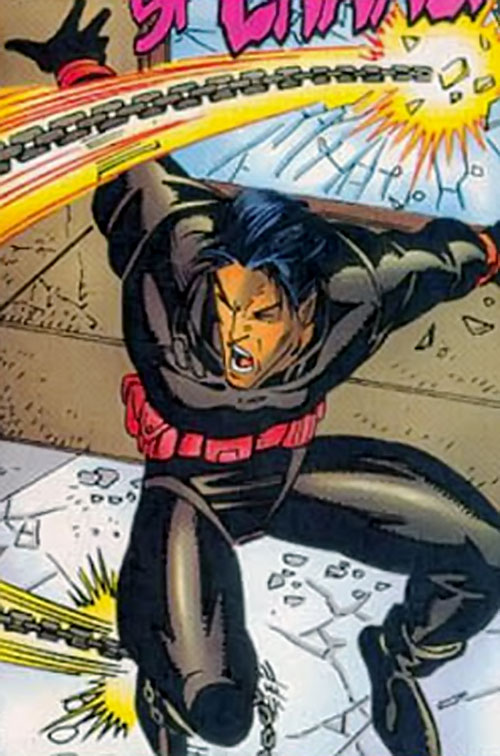 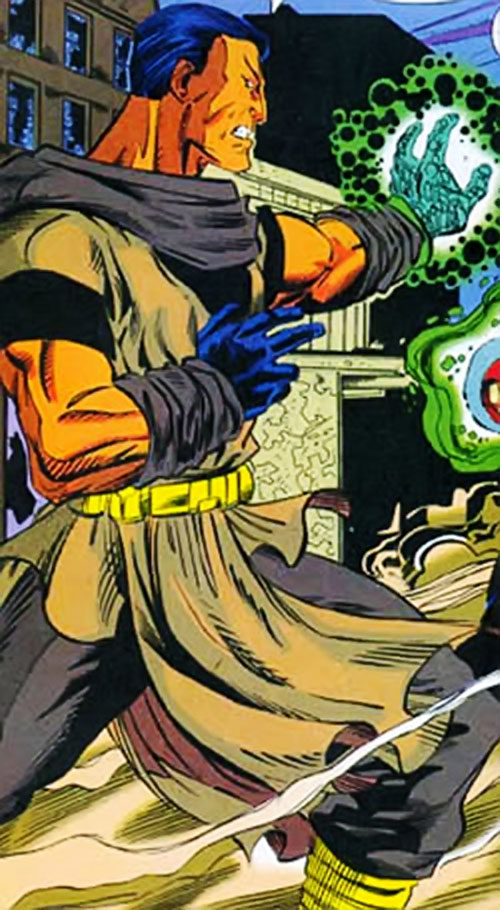