Jenni can move at hyper-sonic speeds that approach the speed of light. Her top speed has been clocked around 2,000,000 mph! Jenni’s reflexes are sufficient to dodge laser fire.

By moving her limbs at superspeed, Jenni can generate gale-force winds.

Beginning with Barry Allen, the second XXth century hero known as the Flash, all members of the Allen family were born possessing superhuman speed. The only exception to this was Jenni Ognats.

Jenni is the daughter of Dawn Allen Ognats, one of the famed Tornado Twins. Dawn used their super-speed abilities to free people from Dominator experimentation camps. In the process of this rescue, though, she and her brother Don were killed. The Dominators then became fixated on them and their super-speed as a subject for new experiments.

With her grandfather Barry dead long ago from a Crisis and her mother and uncle killed by the Dominators, only Jenni and her cousin Bart remained of the Allen genetic speed heritage.

On a slow run

Bart was taken back in time by their grandmother Iris to save his life from his runaway metabolism which was aging him too quickly. This left Jenni, who went with her father to hide out on his home planet Aarok. This didn’t work, though, and the Dominators caught up to them.

The cruel aliens tried fruitlessly to trigger her super-speed abilities many times. But they didn’t succeed until they threatened her father with torture. Her latent powers kicked in, and she managed to rescue her father. The government of Aarok then took over her life to test her abilities, albeit in a much more humane manner.

When the Legion of Super-Heroes was formed, Jenni was drafted to join them as XS. At first she was scared of the dangerous missions, but Legion leader Cosmic Boy inspired her to face her fears rather than run from them. She has since developed an attraction for him.

The ancestors of speed

Jenni then found her way to the one group of people who might be able to help her reach her home era…the XXth century’s super-speedsters, led by her cousin Wally West, the third Flash. She also met her cousin Bart, now known as Impulse. But soon after they met, their speed was stolen by the villain Savitar.

After Savitar was defeated, Wally West disappeared. In his place appeared John Fox, who took the name Flash in the XXVIIth century. Fox, who had considerable knowledge of time travel, helped Jenni get home.

Once back in the XXXth she was picked up by Valor and Andromeda to help out her fellow Legionnaires in their fight against the Fatal Five. She has been a valued member of the Legion ever since.

Jenni has dark skin and wears her brown hair in a ponytail. Her dark blue and white uniform is short-sleeved and short-legged, with yellow boots and white gloves.

Jenni is very excitable and hates waiting. She often has serious (at least in her mind) crushes but is scared stiff when it comes to revealing her feelings to those crushes.

“The Call of the Speed Force”

If Superspeed is succesfully Pushed to 29 APs or above, XS must immediately make a Will/Will check with her Will/Will as OV/RV and a +2 CS penalty to the OV/RV. If XS does not score at least 1 RAP, she hears the “call” of the Speed Force.

She must devote all her subsequent actions to breaking the “Speed Force Barrier” (Pushing her Superspeed to achieve a speed of 35 APs or higher; Jenni must “buy” as many Pushed RAPs as possible).

Once she does, she must make another Will/Will check with her Will as OV/RV and a +2 CS penalty to the OV/RV. If this check fails, XS is absorbed by the Speed Force (and effectively “dies”). If the check scores 1 or more RAPs, XS is instead bounced into the future an amount of time determined by the GM and no longer must attempt to break the Speed Force Barrier (-2 FC) 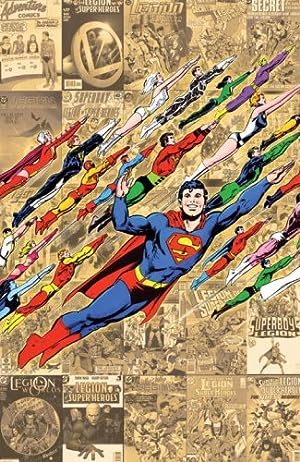 Legion of Super-Heroes: 1,050 years in the future 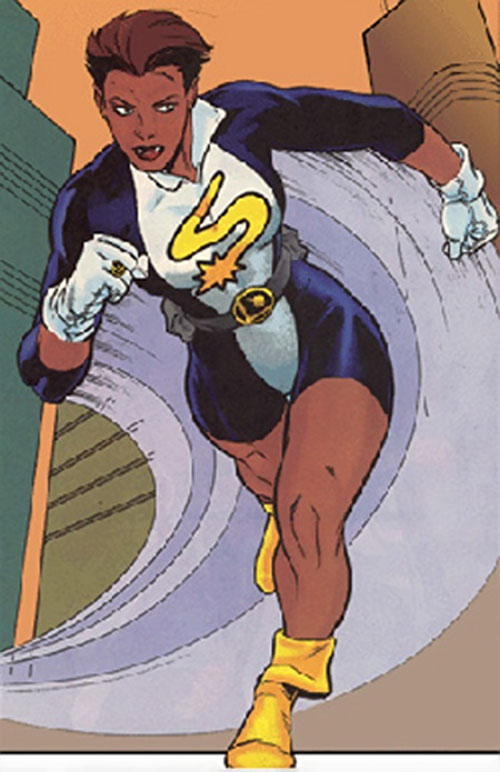