Queeg was an excellent space pilot, with many years of active trafficking in space. He could navigate around space easily and had expert knowledge in all colonies out there and their populations. His expertise in vehicular usage and mechanics also extended to common land vehicles.

Apparently having led an active life out in space, he was able to hand firearms real well.

Although morose, Queeg was also quite a good team player.

Yancy Queeg, a veteran space pilot, was cursed by an Andromedan witch. It was a curse of eternal life, or rather the ability not to be able to die permanently no matter what. Along this condition came a constant pain in his body and his only wish soon became to die. But Queeg could not die. Any damage to his body was soon recovered and he’d be back at full health again.

Queeg had done just another attempt at suicide when Salinger found him in his hotel room in the Net, Big City. Salinger promised him that she would kill him in exchange for a his services. Her mutant ability seemed capable of delivering. Queeg, realizing that his nightmare would come to an end, readily agreed to join the Outcasts.

Much later when Salinger had been shot dead, Queeg gave her his own life-force, hoping to die doing so, but ended up as a rotten head only.

After the Outcasts freed Big City, Salinger kept her promise and killed Queeg’s head… or so she thought. In the state that he arrived at it’s impossible to say whether he lives or is dead. Regardless, he’s now kept in a bucket that his old pals Rickenbacker and Killer always bring along on their adventures.

Queeg bears a slightly zombie-like appearance including a sleepy, tired look, which one can imagine on a man that hasn’t slept for years. His movement is slow and sluggish.

He often wears full body suits, that include kneecaps, elbow pads, shoulder patches, jacket, high boots and trousers. All is often, but not always, black in colour.

His eyes are completely black except for the center in which there’s faint, white light. This enhances his dead man look.

Queeg is an extremely morose and bitter person. He has a real deathwish, is constantly bored, dislikes the city and doesn’t care about it’s future. He only wants to die, and therefore became a bit more happy after he got the promise to be killed by Salinger. He also found some confort in his comrades, particularly Rickenbacker, but still wanted to die.

Knowing full well that his body can come back from any damage, he occasionally used that to protect his comprades. Like jumping in front of bullets, of crushing doors, etc. He appeared to be genuinely happy when the team went on a space mission and looks back at his space-traveling days with fond memories. Of course, he was even happier when Salinger finally killed him.

Having spent most of his time by himself since he was cursed has made him into a loner and he’s somewhat uncomfortable among people.

“Then why do you waste my time ? The only thing I long for is death… and nobody can give that to me !”

In the DC Universe they have no real position of equivalent, although, in case the Outcasts’ world is in the DC Universe’s future, they might be descendants from various well-known DC characters. For example, Yancy Queeg could be the descendant of Pariah (born normal, but easily cursed into eternal life).

Bonuses and Limitations:
Invulnerability can even be used after death (+5). 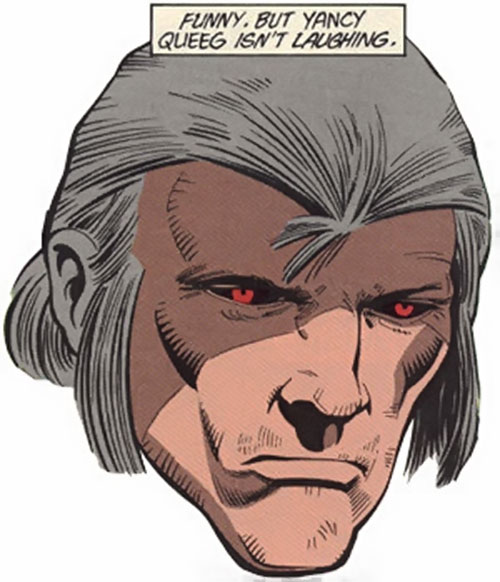