Riding on a pony !

Since there seems to be a few folks who do not know about “Yankee Doodle, Master of Disguise, Secret Agent Extraordinaire, who always leaves… A Feather For His Foes !”

(Doom Patrol #29-63 are among the greatest books ever published by DC. Right there with Dark Knight Returns or The Sandman).

“John Dandy worked as a special government agent attached to the Pentagon’s unusual operatives division. The UOD oversaw the Men from N.O.W.H.E.R.E., the seX Men, the Dust Devils, and some of the others.

“Dandy used his cover as an archaeology professor to steal some research notes from a guy called Rodor. The notes helped him synthesize a special gas which solidified on contact with air, into a kind of malleable super-skin. The gas cartridges could be stored into a ball point pen. The super-skin could be moulded into incredibly life-like masks, which made Dandy a master of disguise.

“Using the code-name Yankee Doodle, he went out there and kicked ass for Uncle Sam, no problem. Until some government big-wig freaked out and went down into the city under the Pentagon, taking a lot of sensitive documents with him. Somebody had to go down there after him and Dandy volunteered.

“It was a clear case of curiosity killed the cat. They sent him down into the White Abyss and waited. There were garbled radio messages about enormous structures walking, people or things with tunnels instead of eyes… and then we lost all contact.

“A year later, Dandy came back. Or at least, something that claimed to be Dandy came back. It was hard to be sure on account of his FACE. He insisted he swapped his original face for this new thing and… well, then he did something to two of the soldiers…

“This is where he lives now. Put on your glasses and try not to show any fear. His faces pick up on fear very quickly and he may lose control of them.”

Bonuses and Limitations:
Postcog, Precog and Neutralize only works on living beings (-2). 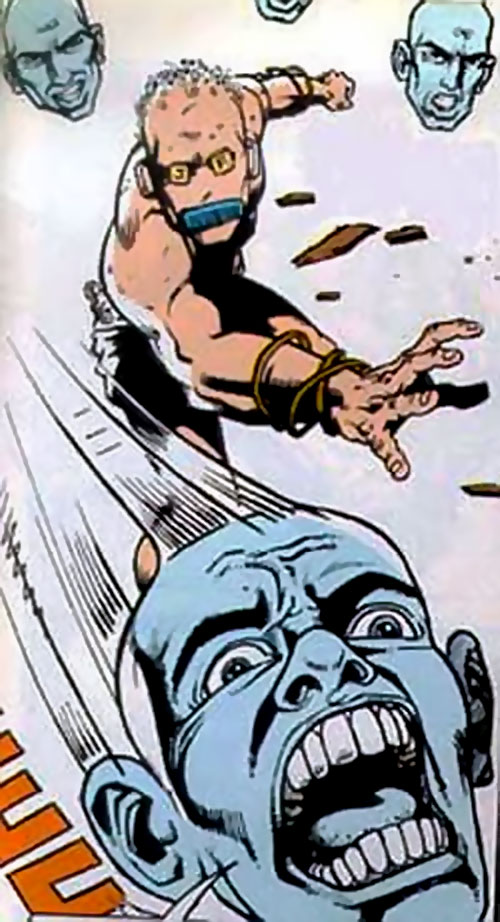