Yasemin is a highly-skilled marksman, allegedly on par with Deadshot. She’s also a capable hand-to-hand combatant, although not nearly to the same level.

Yasemin hails from from a family of expert weapon makers who have made and trafficked the finest weapons since the time of the Seljuk Sultanate . She inherited the ability shared by the women of her family, infallible aim with any gun of any kind. She became one of the worlds leading arms traders, operating out of Istanbul. 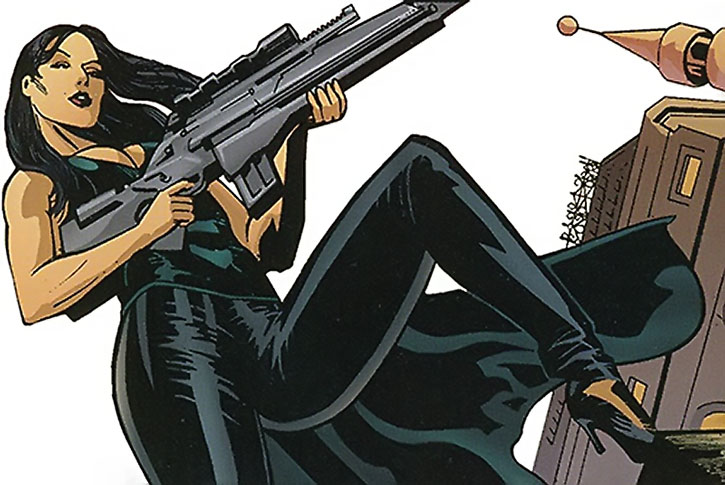 When Helena Bertinelli (Huntress) visited to tell her she was taking over supplying some of her Gotham clients (actually part of her plan to harm them) Yasemin was amused by the challenge. She travelled to America to deal with the upstart, only to fall into a trap and end up in prison.

Her release soon arranged by her former Gotham customers, they nevertheless tried to force her out of the city as quickly as possible. Yasemin declined with lethal force, and forced her surviving escort to help track down Huntress. Finding her in the middle of a fight, Yasemin quickly gained her attention, and drew her into a confrontation.

To draw her on, however, Yasemin made the mistake of threatening Helena’s pupils. While she lay in wait with a rifle, Huntress snuck up on her from behind, engaging her in unarmed combat. Outclassed, Yasemin was easily beaten, and Huntress, enraged by her threats, dangled Yasemin from a rooftop.

Soon approached by Amanda Waller, Yasemin was recruited into the Suicide Squad. She was a substitute for Deadshot, who refused to rejoin after Waller’s previous betrayal. Yasemin constantly felt herself being poorly compared to him. 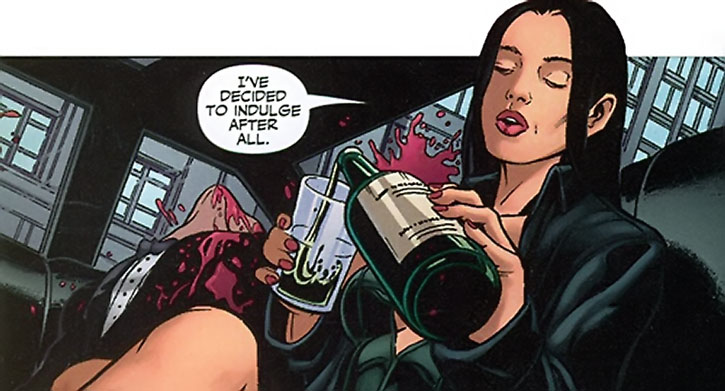 On her first mission she was sent to take out Mexican drug lord, Santa Muerte. She failed after running into too many bodyguards and retreating, knowing that Deadshot wouldn’t have done so.

Waller soon began an operation against the Secret Six, to coerce Deadshot into rejoining. She tricked the Six into breaking into Belle Reve. Yasemin saw her chance to prove herself Deadshot’s equal, and sought him out.

Finding him with his back to her, she called him out. But he had no such scruples and fired on her before she’d counted to three, killing her.

The confrontation occurred during the Blackest Night . Thus, Yasemin was animated almost immediately, joining the other Black Lanterns in attacking the Six and the Squad. The zombies were destroyed by a Manhunter bomb in Waller’s possession.

Initially calmly confident and self-assured, she was shaken after taking a beating from Huntress. Whether this affected her nerves in the Santa Muerte hit is unknown. But that was probably more due to the fact that Deadshot would have waded in regardless of his chances, and he’s who she knew she was being compared to.

Her confrontation with him showed a desire to prove herself. More generally, she’ll give her opponents a “sporting” chance to survive.

“I love my guns, Ms. Bertinelli. They are like my children, only they speak only when spoken to. I’m very careful about where they are sold.”

“Vengeance is the only true nobility in life.”

“You are not worthy of my product. Except in this manner.” [Shoots]

Equipment:
She usually has at least a pair of standard handguns on her, a pair of submachineguns if expecting a number of opponents, or a rifle when intending a more long range confrontation.

Prior to her clash with Huntress, Yasemin didn’t have Uncertainty.

While she’s reputed never to miss with a gun, the evidence of her performance against serious opponents is inconclusive. 8 APs appears to be the minimum for what we see, but it may actually be higher.