This profile is a direct continuation of Yoko Tsuno’s character profile, part #1.

Furthermore, our merry adventurers went on to :

Veneya (Vinéa in the original French) is extremely similar to Earth. It lies two million light years away, in the Triangulum galaxy (M33) . However, the two suns in Veneya’s system were not stable and drifted too close. This resulted in a gravitational tug-of-war.

The heat from the stars sucking each other’s outer layers scorched Veneya. This forced the population to emigrate to underground cities. They lived there for thousands of years.

Then Veneya started getting sucked toward its merging suns. A titanic project was launched to abandon the planet. But the steadily worsening gravity well and solar wind did not help.

Huge ships were assembled one after the other in orbit. But though a hundred were planned, it was over before the 12th could be built. Most of the population in the ships were children, who had priority. All were kept in magnetically-induced suspended animation.

The 11th ship reached Earth after two million years, about 400,000 years ago. Earth was remarkably compatible, but Veneyans had become unable to live on the surface after so many generations underground. Furthermore, they breathed a slightly different atmosphere.

It was decided to take everything underground — including the spaceship after taking it apart — then have most everybody return to suspended animation. The suspension system would then biologically adapt them to life on the surface.

This process would take hundreds of thousands of years. Though it wasn’t explained, a likely hypothesis is that having spent two million years in suspended animation immensely slowed down treatments.

There also seems to be a cultural bias against waking people up and having them live underground just like on Veneya. The goal seems to be waking them up when they can live freely on the surface, and not a second before.

Small numbers of Veneyans were woken up to run the undergrounds installations, living and dying as the rest remained asleep. Two Veneyans became close friends of the Trio – Khâny, who has some seniority among her people, and her kid sister Poky.

Both were originally close in age, but Khâny was woken up well before Poky was. Thus Khâny looks, to human eyes, to be in her mid-30s whereas Poky is still a little girl.

Veneyans are basically blue-skinned Humans, and biological differences seem very minor. Their atmospheric mix is slightly different from Earth’s and will in time prove toxic to Humans. But even that might be a product of their underground life. 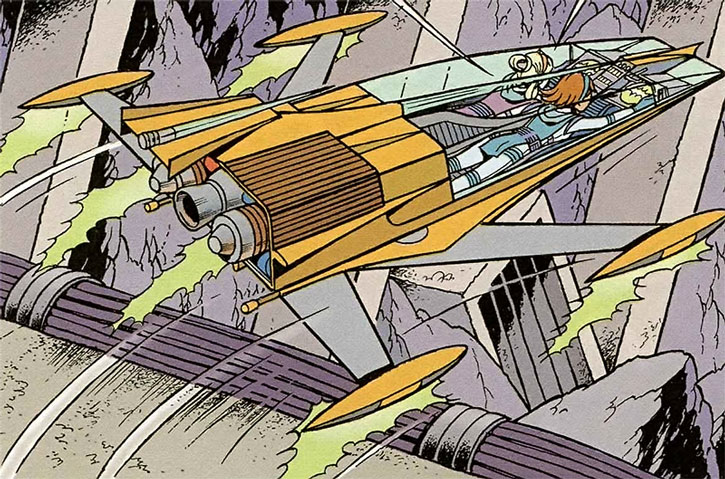 Their psychology seems also basically Human. Still, there are implications that they have a greater degree of psychic sensitivity, explaining their telepathic technology. There is also a loose implication that their lifespan is much greater than Humans’.

What makes it difficult for them to live on a world’s surface was never explained. Khâny and Poky never evidenced any problem. Perhaps it is a sort of agoraphobia, and only the individuals who are the least agoraphobic are awakened from suspended animation.

If so this might explain why the treatment is so long. Thought patterns are immensely slowed down in suspended animation.

Veneyans have a low active population. It’s closer to a big village or a small town and they generally know each other. They greatly depended on a central computer to manage their installations and particularly the suspended population.

Yoko Tsuno was forced to destroy the energy intelligence inhabiting the computer. It had gone evil and was subtly enslaving the awake Veneyans. Presumably, the Veneyans had to awaken more people to compensate. 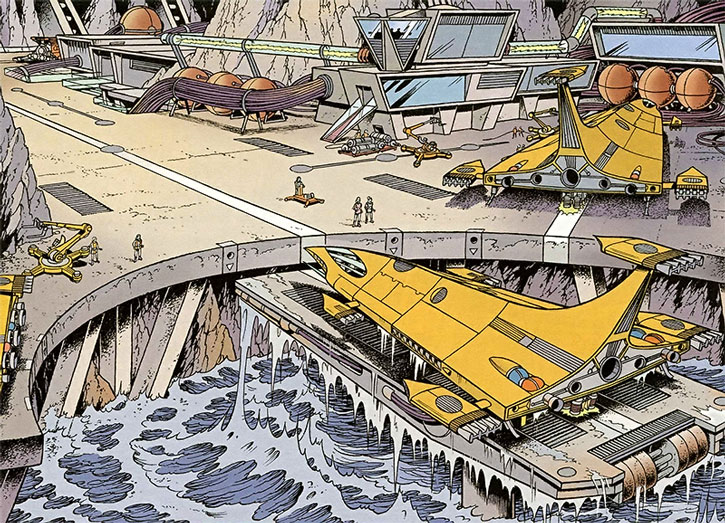 As they awoke more people, Veneyans resumed scientific progress which had halted for almost 2.5M years due to the tiny active population. This made it possible to improve their vehicles, but also to employ point-to-point FTL  tech.

Back to the Triangulum, part 1

Veneyan FTL flight employs a sort of energy tunnel. It is loosely comparable to a black hole, and likely counts as a wormhole . Within it shuttles can do one million light years per month of subjective time. The passengers will be kept in magnetic suspended animation.

In 1975, the space station sent to establish such a tunnel between the 11th ship’s destination and Veneya’s system arrived to its destination. It parked itself in Saturn’s orbit. That was 400K years after the spaceship as it had to “spin” its tunnel whilst travelling, slowing it down.

After a year of testing, the Veneyans decided to launch an expedition to their home system. Since most Veneyans were still uncomfortable operating overground, Khâny recruited Yoko, Vic and Pol as a reconnaissance team.

Once back in the Veneya system, the Veneyans and the Terrans discovered that the homeworld was still around. The red sun had died and exploded before the blue one did. Then the blue one had become stable and turned yellow by absorbing gases from the dead red one.

Back to the Triangulum, part 2

The shock of the red’s explosion had kicked Veneya to a stable and safe orbit around the yellow sun. It seemed potentially habitable since the catastrophic solar events had occurred millions of years ago.

As it turned out Veneya was now tidally locked, with an ice side and a scorched side. But there was still hope that a temperate band would be habitable. The Trio discovered that there indeed was an habitable zone… and that it was already inhabited.

The Veneyan dedicated themselves to restoring part of their homeworld to habitability. They also established contact with the locals. The bulk of the population was kept suspended on Earth as the adaptation to surface life process continued.

Their Terran scouts would prove very useful in :

Yoko is a slim — 50kg at most — Japanese woman in her mid-20s. She’s eternally wearing her late 1960s hairstyle held by a headband. Her French and her English are better than most natives’, with a rigorous grammar.

Yoko’s wardrobe has evolved as the decades progressed. But in formal occasions she sometimes wears a traditional ladies’ kimono. Though she has been living in Belgium for decades, her clothing and interior decoration maintain a Japanese flair.

Ms. Tsuno tends to swear in Japanese. But she has occasionally used her improbable “by the thousand kimonos !” exclamation in French. Since the flow of the phrase is identical to much more common and way more vulgar French swearing, the “thousand kimonos” thing is probably a polite euphemism. 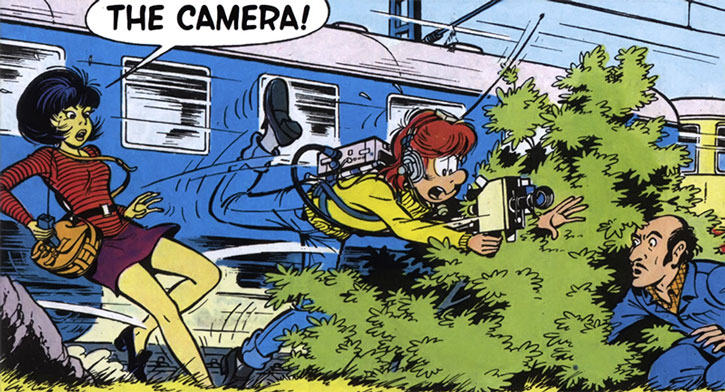 She is a gearhead, and will often get herself a cool set of wheels. In 1973 that was a then-cutting edge Japanese mini-motorbike. In 2012 it’s a Lotus Elise  (mostly paid for by her father). She will be enthusiastic if she has an opportunity to fly a cool plane.

Unlike many action heroes, Yoko frequently changes her clothing to stay fresh and clean. Except, of course, during lengthy expeditions in the field where she cannot bring much luggage. She prefers traditionally feminine clothing, and somehow never has any difficulties operating in a tight skirt and heels.

Yoko being photogenic and skinny, she once did a fashion photoshoot. This was presumably a consequence of making a new friend who happened to work in this industry.

Yoko is a nice and very positive heroine. She :

She will never do anything bad. For instance she completely refused to desecrate a tomb, an action which few adventurers would hesitate to conduct. She genuinely cares for people. She will shoot attacking animals if she has to, but the death of any sapient  opponent is something she considers a grave personal failure.

Her bravery is amazing. She will unhesitatingly dive into adventure and danger with the firm intent to do good and protect folks. Yoko never just minds her own business, and keeps getting involved in dangerous situations. Her friends have long since learned to just roll along, since she’s too determined to be convinced not to.

In fact she can get imperious. She is also extremely independent, and terrible at following any order with which she disagrees. On the other hand she is unusually trusting toward strangers, though it generally works out well for her.

Yoko Tsuno is a serious person. She quips a bit, but is very facts-based. Likewise, while she’s very kind, she’s also highly goal-oriented and has something of a temper. Yoko can take blatantly unreasonable risks when she’s investigating something or she’s pissed off.

The latter is easily achieved through racist remarks. These were not uncommon in her early career, back when Japan was perceived as exotic and mysterious in the West. Corrosive sarcasm will also probably be part of her response.

Friendship is very important to Yoko. She wants (or perhaps even needs) to be everybody’s friend. She is uncommonly loyal toward those who reciprocate. 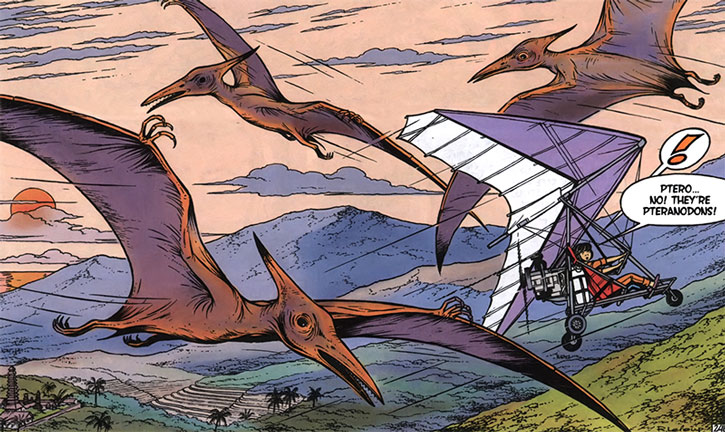 These are not stories with a lot of bad guys who are bad because they’re evil and evil is bad. Hence, Yukio’s policy of open mind and open hand will often play in her favour. It will have some opponents reconsider what they are doing.

Tsuno accepts that sometimes a bad guy is just a bad guy. But she is visibly disappointed when somebody interesting refuses to be her friend.

In the early stories, written in the early 1970s, Yoko still has various cliché Orientalist  sayings. Yet she is deliberately kept mostly culture-neutral and even gender-neutral. She is an adventurer and do-gooder who happens to be a Japanese woman rather than the other way around.

The Orientalist stuff is clearly a product of the information then available about Japanese cultures. It quickly recedes as a better understanding of the country and its people becomes available to the author.

Yoko continues to respect various concepts such as loyalty toward her country, respect toward her parents and elders, etc. more than most Westerners do. There’s also a strong implication that she cannot lie to an older family member under any circumstances.

However, she also stated after a dozen years of Belgian life that she had come to feel every bit as European as she feels Japanese.

In 1985 she stated that she wasn’t sufficiently old and wise to consider herself a full adult. Hence the symbol on her plane – a red half-circle with a red horizontal bar underneath. The half-circle — the top half the rising sun on the Japanese flag — represented the women of Japan, and the line underneath where was Yoko was at that point of her maturation.

Tsuno’s crew is closer to an extended family. It comes complete with children, since her daughter Morning Dew and Khâny’s kid sister Poky are about in the same age.

Vic, Pol and Seiki Tsuno are the only recurrent male characters, with most of the cast being female.

Circumstances perennially conspire to have Morning Dew and Poky accompany the adults in the field, though it is occasionally possible to do the sensible thing and leave them safely behind.

Bonuses and Limitations:
Both Iron Will and Mind Blank are Skilled Powers, and require an Automatic Action to work during any given Phase.

Bonuses and Limitations:
Gadgetry only for maintenance, repairs and power user operations.

Writeup completed on the 1st of September, 2013. 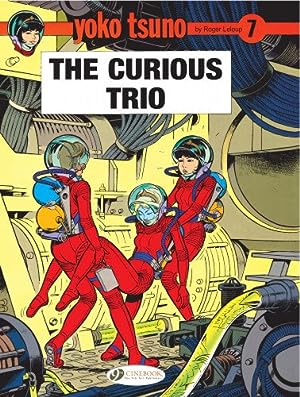 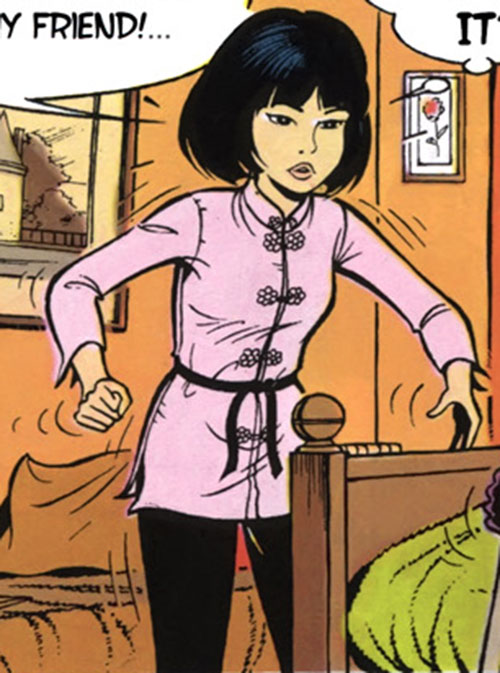 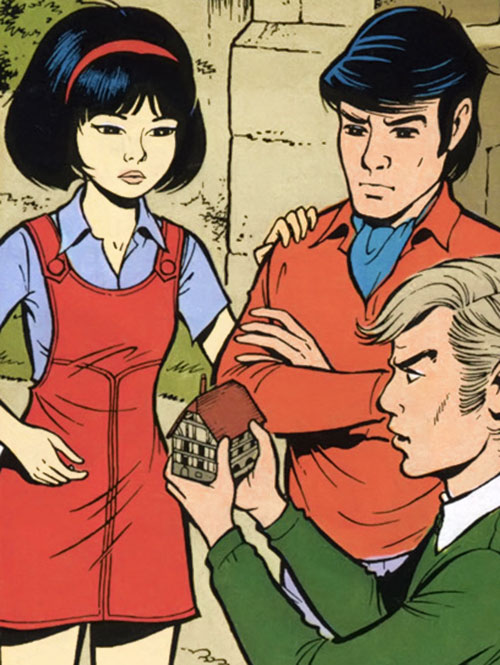 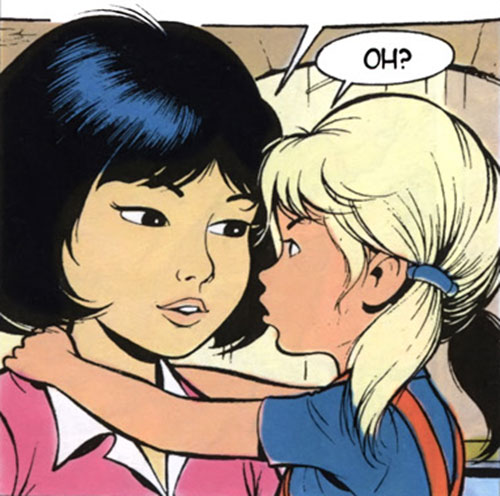 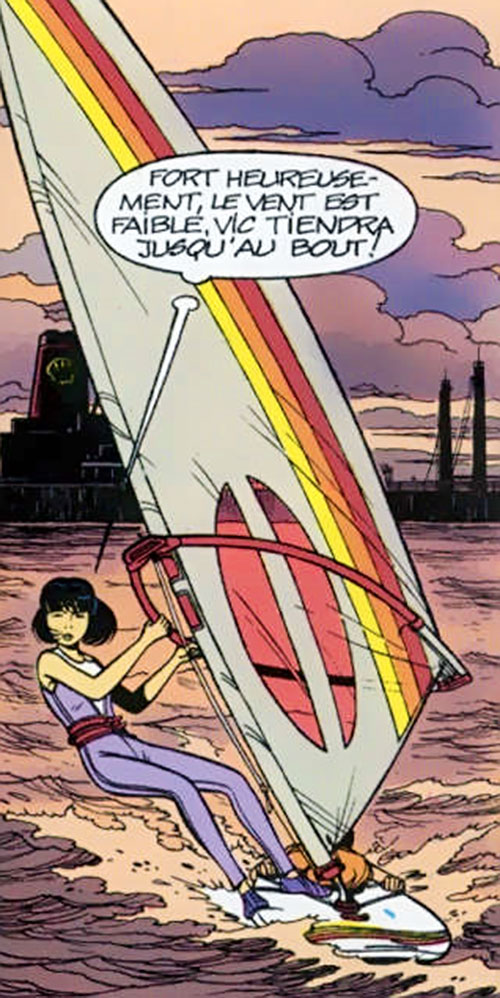 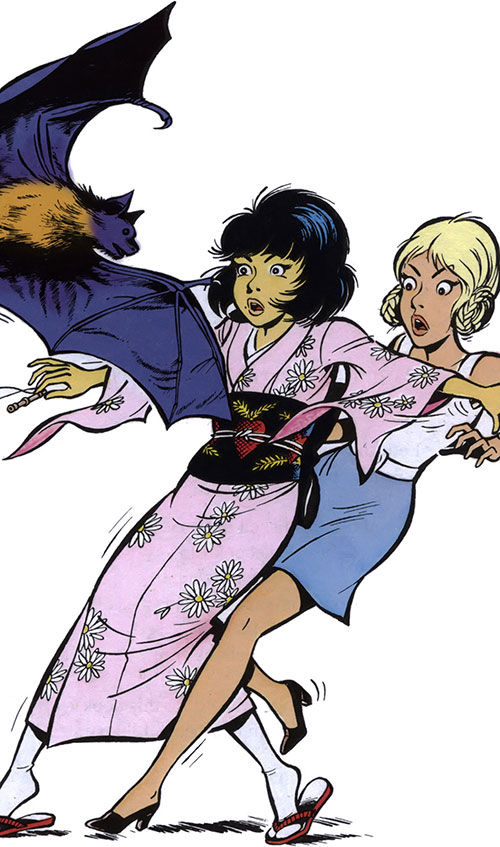 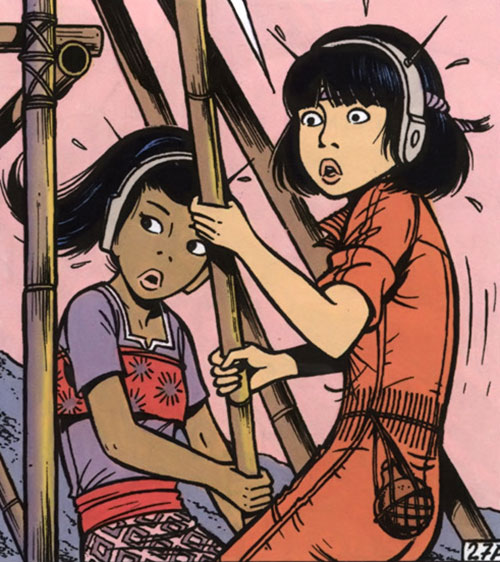 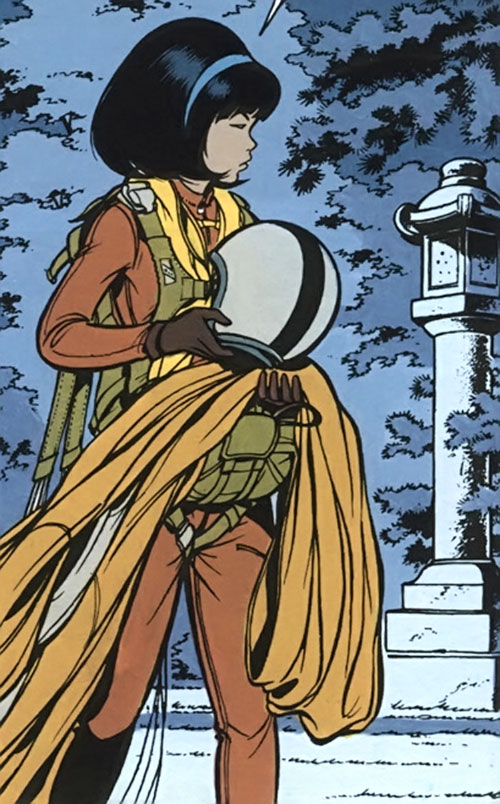 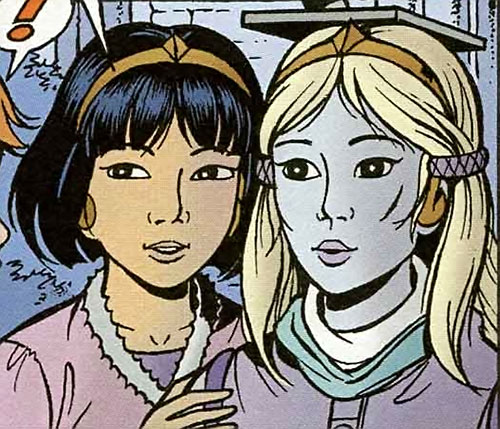 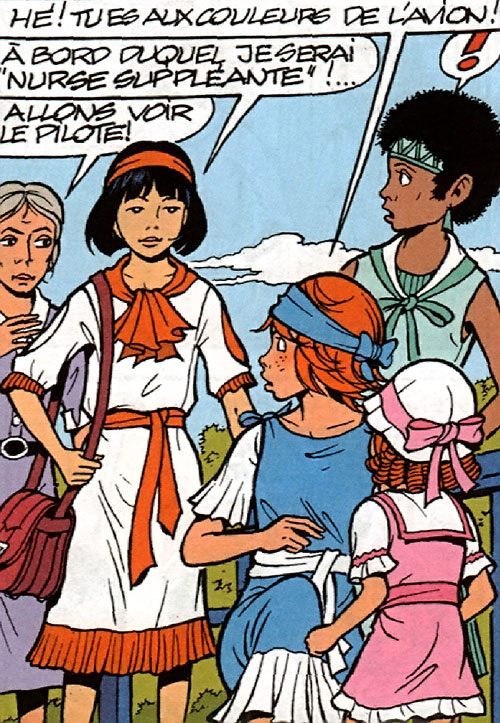 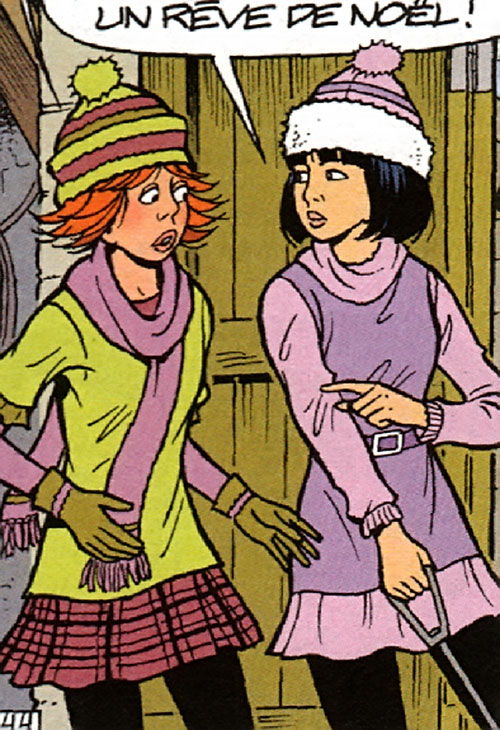