Yondu is a highly trained combatant and hunter, skilled in the use of his weapons.

He possesses some unexplained senses that allow him to empathically feel disturbances and unnatural phenomena in the area. His spiritual abilities also allow him to enter the mind of an unconscious person by contact. However he rarely uses this ability, only resorting to it when a comatose friend needs help and support.

He uses a bow and arrow made out of Yaka, a sound-sensitive metal from his native planet. By high-octave whistling he can control the flight of his arrows, often directing them to fly around his opponents, keeping them distracted and off balance (in DC Heroes RPG terms, Flash). He also uses a knife of the same material.

Yondu Udonta was a warrior and hunter of the primitive Zatoan tribe. These are native to the planet Centauri IV, which had been colonized by Human travellers. The settlers left the natives, who worshipped their god, Anthos, alone.

The Humans saw the natives mainly as a tourist attraction. Most of the Centauri adapted to their new neighbours, although they remained wary of their technology. Yondu’s tribe, however, migrated to less accessible areas, to avoid contact with the Humans.

When the anachronistic human Vance Astro carried out a geographical survey of the planet, he met Yondu. At this point, the Centauri was performing a coming of age ordeal. Although Yondu tried to avoid contact with Vance, they were forced to work together when the Badoon invaded.

The genocidal Badoons wiping out the rest of the population. The Human and the Centauri fled in Vance’s ship, setting out for the nearest planet. The ancient craft was soon overtaken by the Badoon, and the two were captured and transported to the conquered Earth.

When they faced Force, Yondu discovered he wasn’t the last surviving Centauri when he met Photon. He was shocked when she viciously attacked him, claiming she wanted nothing to do with other Centauri, being glad that the others had been killed.

Yondu felt spiritually shattered. He had found the opportunity to propagate his species, but no longer knew what Anthos expected him to do now. He went through a period of depression and violent outbursts until his team mate Starhawk helped him regain his centre.

The next time he met Photon, his instincts got the better of him, and he nearly killed her. Angered by this, her adoptive father, Interface, turned Yondu’s hand to steam. While their teams called a truce, Yondu and Photon recovered from their wounds, and talked, parting peacefully.

His lost hand was replaced with a Weapons Concealment Appendage, leaving him unable to use his bow and arrows or knife. He gave the bow and arrows to Photon, and the knife to Charlie-27.

On discovering some Centaurians had survived the Badoon slaughter by living beneath the planet’s surface, Yondu decided to stay with them.

When the Guardians’ attempt to preemptively stop the Badoon in the past failed, their actions caused a ripple in the time stream. This led to the Badoon invading Centauri IV long before they previously had. In this new timeline the Badoons exterminated out most of the natives, and forcibly bred a hybrid race. 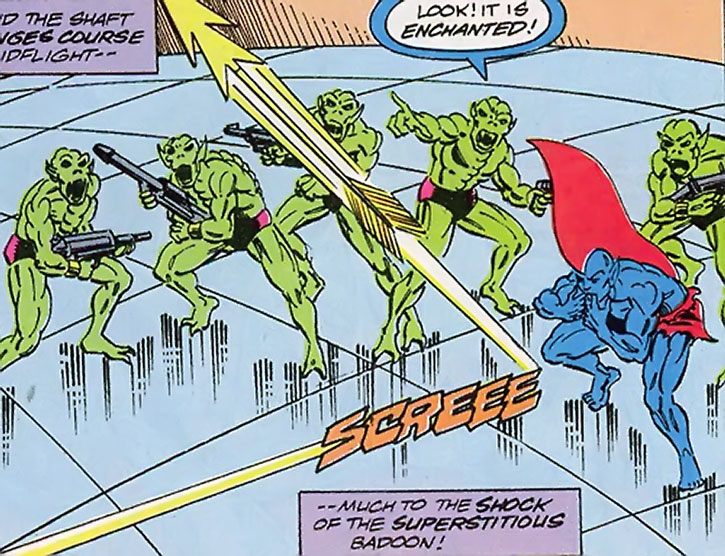 Yondu survived the change with his memories intact, and learned from Starhawk that the Guardians were responsible. When they arrived soon after seeking his help to confront the Beyonder, he refused unless they corrected things. Starhawk and Aleta travelled to the past, fixing the problem and returning things to normal.

While they were doing so, Yondu and the other Guardians were taken by the Beyonder to help him oppose Protégé. When they finally returned to their universe, the Guardians were attacked by Rancor’s mutants, and Yondu faced Mindscan. She gave him visions ’revealing‘ that his god Anthos, was actually a disguised Thanos.

Devastated by the doubt Mindscans had instilled in him, he began a search for the truth. He remained with the Guardians, possibly not wanting to take his doubts back to his people.

Ultimately unable to find evidence to refute Mindscan’s claim, Yondu found the faith within himself again, making peace with his god. He stayed with the Guardians as they travelled back in time to prevent the Martian invasion, and was stranded with them on the return trip.

Usually quiet and spiritual, Yondu is nevertheless a warrior. In combat he acts with a ruthless efficiency, and a brutality that sometimes shocks his team mates. He maintains a calmness, suppressing the irritation he sometimes feels at his friends.

His native language is a series of grunts, clicks, and whistles. While Yondu has learned to speak English, it can be painful for him to speak at length, so he tends to appear taciturn.

Yondu is deeply spiritual, and dedicated to his belief in Anthos. He closely follows the rituals of his faith, and avoids technology when he can. He’s willing to be teleported by the Guardians technology, but is unable to operate a lot of their machines, such as flying their shuttles.

He frequently senses wrongness in nature, in unquantifiable ways, which usually turn out to be accurate.

“I must commune with Anthos. I am troubled.”

Bonuses and Limitations:
Telepathy is Serious Marginal (-2), and has a Range of Touch (-1).

There have been occasions of him sensing undefined “stuff” such as when a planet is dying. But these instances are too vague to really warrant a power, apart from the listed Telepathy.

He has also stated that he knew there were no more Centauri because he could not feel any out there. Photon was supposedly outside his range because she no longer held to the Centauri faith, and the surviving Centauri were shielded from his power. There’s really nothing to indicate any actual power here.

The Lightning Release Shtick is described in the Bows article on WORG.

Yondu possesses undefined senses which allow him to be attuned with the natural world. He seems to have a mystical rapport with nature, particularly that of his native world.

He is also able to detect the presence and activities of powerful mystical beings and forces. He has a limited form of empathy with other life forms, with the strength of the link inversely proportional to the developmental level of the life form.

Most of these senses can be covered by his Awareness and Role-Playing, but feel free to allow him other sensory powers which would fit the feel of these, at no more than 3-4 APs.

For a while, when he’d lost his right hand, it was replaced with a Weapons Concealment Appendage, which could morph itself into a variety of weapons, including a mace, hatchet, sword, arrow-launcher, and a laser beam (which he found by accident, vowing to never use it again) [BODY 06, EV 05, Claws: 05, Laser Beam: 06, Projectile Weapon: 03]. 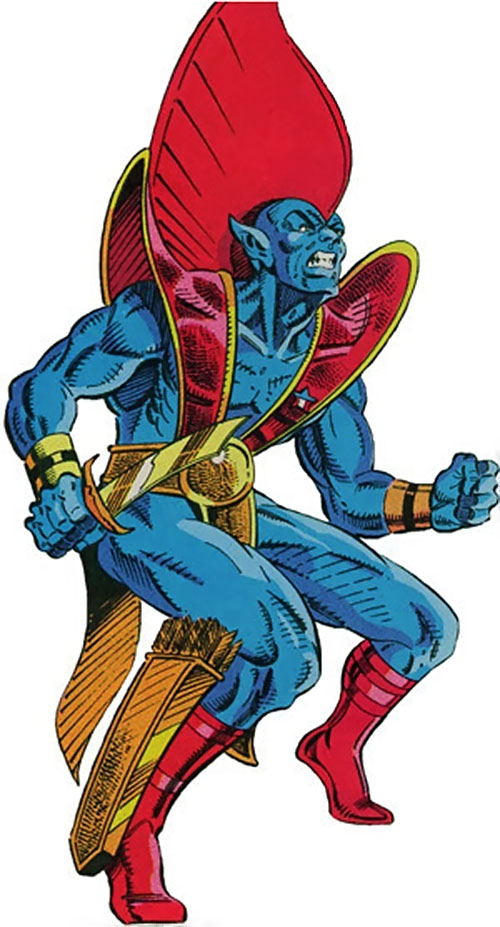