We’ll therefore present it as two short articles, rather than as one article that might be too long for some.

The Yoshimitsu in the first Tekken game might be the sixteenth of his line. It’s hard to say given Namco has never gone that deep with it. So it’s just a rough guess based upon how long the original stayed in power before passing it on to a successor.

Also, when the very first Tekken game came out it vaguely hinted that Yoshi was a space alien.

It’s not known which Soul Calibur timelineUsed here in the sense of an alternate history, where events unfold differently is the past of Tekken. Fan consensus is that it was the time-tested original. Not that any of that matters because…

The Manji Clan was still around and still doing their Robin Hood actions. Chiefly in their native Japan, but with some international operations.

When Yoshimitsu heard of the Tekken tournament he decided that his unusual appearance and fighting style would be the perfect distraction for his men to sneak into the Mishima Zaibatsu. And steal the prize money to give to the poor.

Kunimitsu, once a petty thief, had joined the Manji Clan in order to hone her own skills. Once she got high enough up in the ranks she started embezzling from the clan. Yoshimitsu discovered her treachery, and after beating her in single combat, banished her.

It would’ve been better for him had he killed her, but Yoshi, ever the hero, didn’t roll that way.

During the tournament Yoshimitsu fought sumo wrestler Ganryu. Namco never stated who won the match, but it would seem more likely that Yoshi was defeated. In any case, Yoshimitsu was disgusted by the disgraced sumotori’s attitude.

Ganryu had previously been the youngest sumo wrestler to earn the title of Oozeki (champion). He was poised to ascend to the coveted position of Yokozuna (grand champion), until his corrupt behavior got him barred from the sport. He loved illegal gambling, had become rich from unspecified crimes, and flaunted his ill-gotten gains.

The Mishima Zaibatsu’s security proved too much for the Manji clan to infiltrate. But after their match Yoshimitsu personally led the operation to steal Ganryu’s wealth and give it to the poor.

His ending indicates that Marshal Law and his family may have been recipients of some of the cash. 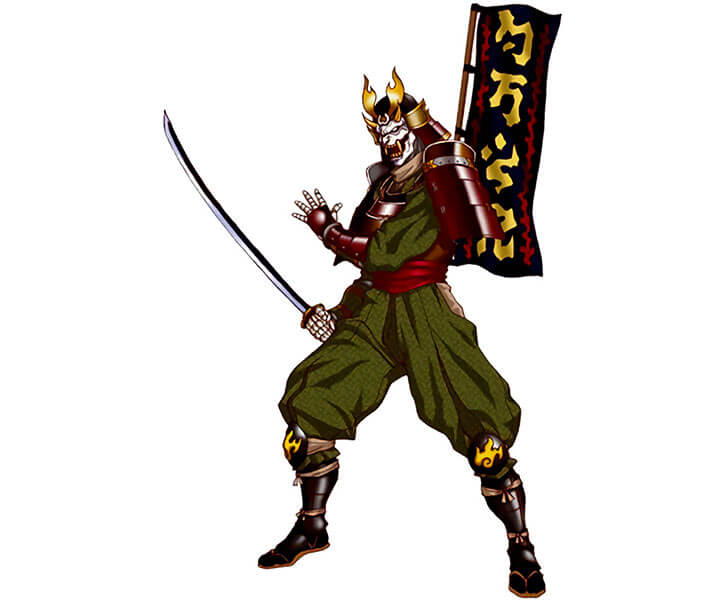 Yoshimitsu lost his arm during a botched theft of the Perpetual Engine. Amazingly Dr. Bosconovitch, the genius behind this invention as well as Jack 2, took pity. The doc understood that Yoshi was trying to do the right thing, and gifted him with a cybernetic arm so he could fight another day.

During the next King of the Iron Fist tournament Yoshimitsu learned that Kazuya Mishima, the tournament’s host, had abducted the good doctor. And was forcing him to develop WMDs. Yoshi didn’t really participate in the tournament this time around – he just needed access.

While looking for Bosconovitch, he ran into his sworn enemy Kunimitsu. She had learned that her grandfather had forged Yoshi’s katana, and thus saw it as her heirloom rather than the Manji clan’s. After a brief scuffle, Yoshi once again sent her packing.

The ninja rescued the doctor. Their getaway helicopter was shot down. But Yoshimitsu had his cybernetic hand spin extremely fast – fast enough to use his katana as a propeller and glide them to safety.

Stories started floating around the martial arts world that Ogre, the god of fighting has returned after thousands of years. He was now stealing the souls of powerful fighters. The only way to put an end to it was to win the next King of the Iron Fist Tournament so as to challenge the god.

Furthermore, Dr. Bosconovitch stated that Ogre’s regenerative magical blood was the only way to save his life. Though this may have been a lie. Since his own young daughter had an unspecified terminal illness, and he was forced to put her into cryogenic sleep.

Somehow, Yoshimitsu obtained a sample of Ogre’s blood after the tournament. Bosconovitch lived (assuming he’d been sick in the first place), but his daughter didn’t. However, she would be resurrected in a fashion as the Alisa gynoidA female-shaped android. But that’s another story for another write up.

The prize for this Tekken championship was control of the Mishima Zaibatsu. Yoshimitsu entered without a second thought, since winning would be a colossal boon for the downtrodden.

He didn’t win, and likely performed poorly. But he did manage to break into the vault. While carrying out cartoonish bags of money, he stumbled upon an injured fighter by the name of Bryan Fury.

A gifted but terribly corrupt detective, Fury had been killed whilst investigating the Hong Kong drug trade. Dr. Bosconovitch’s amoral rival, Dr. Abel, used some mad science to bring Bryan Fury back from the dead as a sort of zombie cyborg.

Yoshimitsu felt a certain kinship to Bryan and decided to rescue him as well on his way out. He was able to get him to Bosconovitch, who used his genius to not only save him, but also upgrade his cybernetics.

But as the saying goes no good deed goes unpunished…

Upon awakening, the more-powerful-than-ever Bryan went into a psychotic rage. He slaughtered the Manji Clan. Doctor Bosconovitch narrowly escaped, with grave injuries.

Yoshimitsu had been away on a mission at the time. Upon returning, he vowed to avenge his fallen brothers and sisters in the upcoming Tekken Tournament. 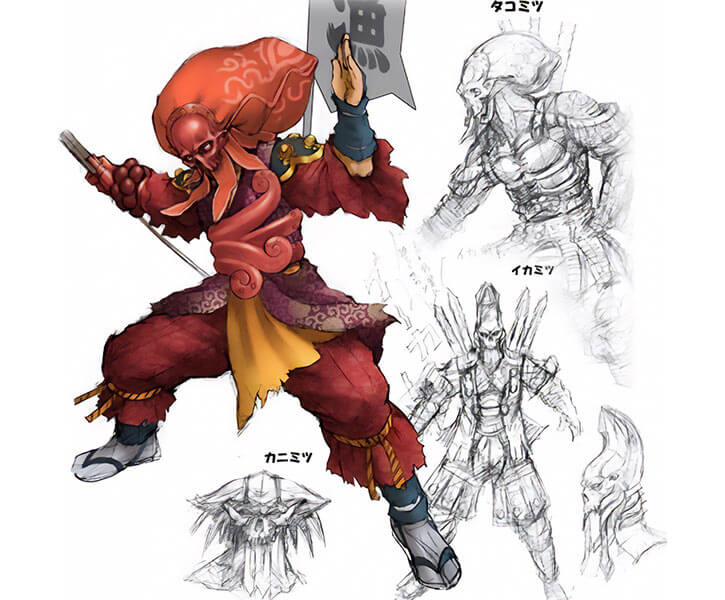 As he hunted Bryan, Yoshi realised that his control over his evil blade was weakening. It had been kept in check by drinking the blood of evil-doers, but that no longer sufficed.

This meant that he would be consumed by the blade’s inherent villainy should he not rectify the situation.

Yoshimitsu sensed that the Mishima Zaibatsu, with Heihachi once again at the helm, was up to no good. He entered the tournament to investigate.

Things went well for the modern-day Robin Hood until he infiltrated the Mishima Dojo.

There he encountered Leo Kliesen. Not trusting one another, the two fought and the outcome hasn’t been determined. In each other’s respective endings the storyline takes a different turn depending on who you play as.

Yoshimitsu always wears elaborate samurai style armor. He never, ever takes it off. You can also clearly see his mechanized wooden arm.

He tends to speak in a grand Shakespearean form in English. So, we can assume he talks this way in Japanese as well.

In English-localised Tekken games he speaks entirely in Japanese with subtitles. For whatever reasons, the modern day Yoshimitsu occasionally speaks like Yoda.

The modern Tekken Yoshimitsu probably has the most drastic costume changes of any character. Covering them all would take several pages.

In the very first game his armor looks more like western plate mail with a white kabuki face mask. But in later instalments it starts to revert to more modern pop culture samurai armor.

From Tekken 3 onward the design crew decided that things needed to be glowing, likely to show off the improved graphics engine. So parts of Yoshimitsu’s getup, often the eyes, glow.

There were a few unusual outliers that were really off the wall – even for Yoshimitsu. 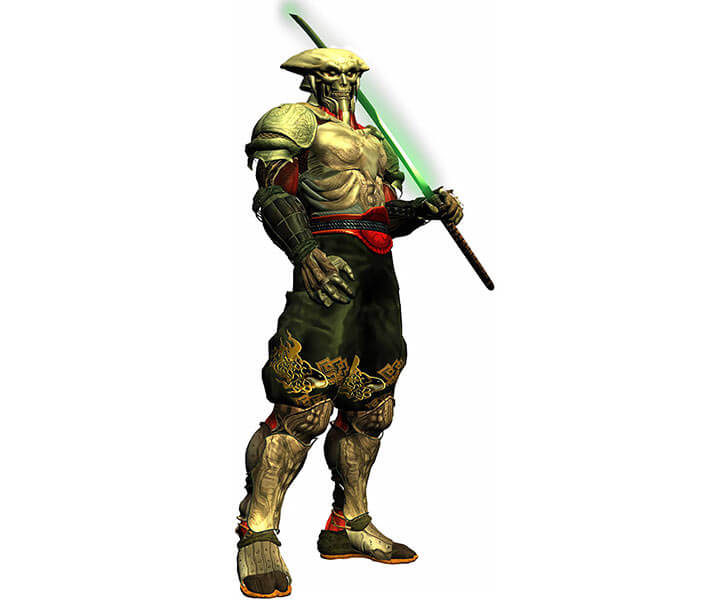 Yoshimitsu’s a classic Robin Hood-esque hero. When Nobunaga first approached the original and tried to recruit his ninja into his army he flatly refused. But when his brethren were slaughtered, he had no choice but to take up arms and avenge their deaths.

Of course, he often got sidetracked robbing from the rich and giving to the needy. But hey, whenever evil such as the Soul Edge threatens the world, you can expect Yoshimitsu to be on the front lines with some sort of plan.

After he founded a clan of outcasts and misfits, they were inspired to keep his identity alive. They have demonstrated the same principles of a Robin Hood type hero. They also remain fiercely loyal to their clan and allies, and vengeful against wrong doers. Especially those who have attacked them directly.

The new modern-day Yoshi is pretty much the same as the originator of the namesake.

“Vengeance will be mine, but if I continue along this path, I will be no better than Nobunaga or the Azure Knight…”

“Has my sword been possessed by evil ? Never !! This I shall not allow.”

“Honor is reflected in ones deeds – inaction bespeaks cowardice.”

“Findest the fragment. When thou findest it, thou shalt surely findest him as well… dismissed.”

Leader of the Manji.

003/010.
For the Wealth Score 03 represents his personal wealth and 10 is for his organization. He doesn’t usually keep more than he needs for the basic day to day living, but his organization is obviously well financed and doesn’t skimp on equipment and whatnot. So I figured this would be a better way of modelling it than giving him a Wealth score and Financial Backer.

Originally Kunimitsu was his Enemy after he expelled her from his clan, and she tried to take his sword back for the first two Tekken games.

In T3 he doesn’t appear to have an Enemy, but from T4 onward Bryan is his enemy. Although the storyline seemingly got dropped during T7 the two characters have some unique animations that suggest theirs still bad blood between them.

Also, Kunimitsu seemingly had a daughter – Kunimitsu II. While she was a brand new DLC character whose storyline has barely been developed her promo video made it pretty clear that she’s out to avenge her mother and take Yoshi’s sword.

The body armour seems cosmetic in the games, but entirely ignoring it in his TTRPG stats felt odd.

So it was given unhelmeted armour jack stats, the rationale being that it’s light enough to be silent. Perhaps Yoshi never takes his helmet off because his head is unusually vulnerable due to wounds, explaining the overral lack of protective benefits from a helmet?