The stories were primarily produced from 1996 to 2004, and the trading cards game is still alive and well. It was immensely successful at transferring money from mesmerised lil’ children with eyes full of wonders to a soulless corporation. Which is great.

This here writeup is a mini-profile done in 2003. It didn’t make the publication cut, mostly due to logistics and because no one else on our crew knew anything about Yu-Gi-Oh. But since Verizon decided to destroy the Yahoo! Groups archives, it’s either process it now (with edits) or lose it forever.

Some material may quote from other sites. But most Yu-Gi-Oh sites are long gone as of this writing.

After completing the Millenium Puzzle, Yugi Muto gained the ability to channel the spirit of an ancient pharaoh.

This spirit, Yami Yugi, is ruthless and sinister. He only comes out when Yugi or one of his friends is in danger. 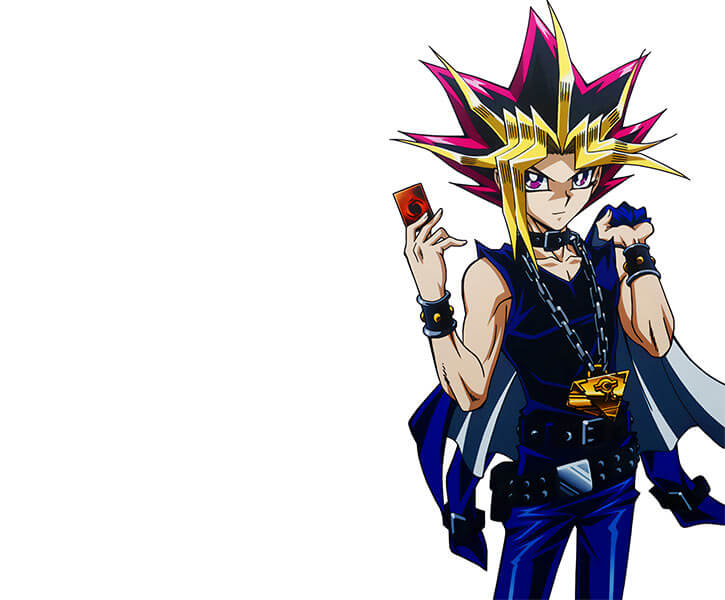 Once Yami enters the scene, he plays a game with Yugi’s enemy. It can be anything, from a simple dice roll game, to a complicated RPG.

Yami can also call on the magic of his Millenium Puzzle to make the game more dangerous. One time, when he was fighting a bully using digital pets, he used his magic to make the keychain-bound monsters seem real.

Due to his amazing skill, brilliant grasp of strategy, and blind stinking luck, Yami rarely loses.

When he does win, Yami uses his magic to inflict a “Punishment game.” This punishment game can be anything from a hideous hallucination, to a blinding, to even killing the victim.

Later in the series, the focus turns more on a card game called “duel monsters”.

Yugi plays a deck that combines monsters that are dark and sinister (like the dark magician and summoned skull) with cute and cuddly monsters (like Kuriboh and the mystic elf).

During a duel, Yugi can use his duel disc (created by his archrival Industrialist Seto Kaiba) to create realistic 3-D images of his monsters and other cards. 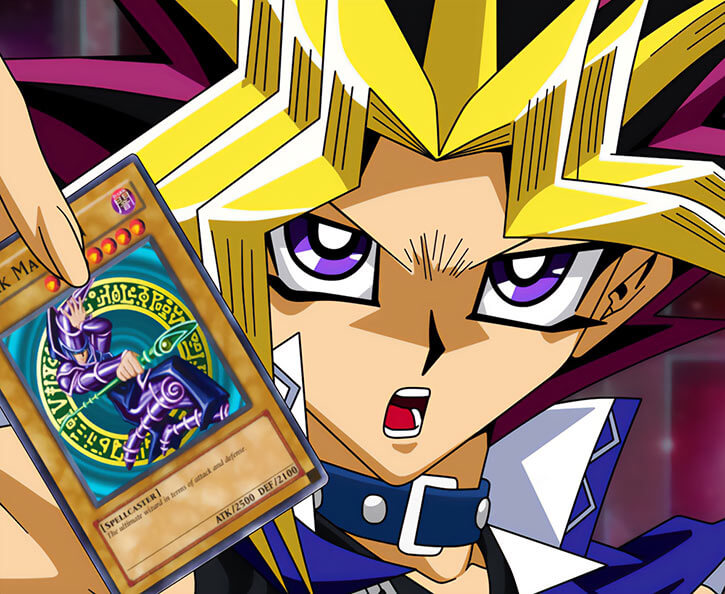 Yugi Muto is a 14-year-old Japanese high school student living in Domino City. He’s the grandson of a retired archaeologist specializing in Egyptian history, who runs a game shop.

The small and gentle Yugi prefers board games to the sports of his classmates. As a result, Yugi is an easy target for bullies. These include punks Joey wheeler and Tristan Taylor, who harass him constantly.

His only friend is Tea Gardener. She and Yugi have been friends since they were kids.

Yugi’s prized possession is an ancient Egyptian artifact given to him by his grandfather. It is a puzzle made of solid gold, kept in a box.

But one day, Joey steals one of the pieces without Yugi noticing. He throws it in a nearby lake.

The tables are soon turned. Hall monitor Ushio, a horrible bully whom even the teachers fear, soon victimizes Joey and Tristan. Knowing that they have been picking on Yugi, he beats them up and then tells Yugi to pay him for doing it.

Yugi instead stands up for the two thugs, considering them his friends. Ushio mauls him and tells him to pay up or he’s dead. He even pulls a knife to prove his point.

That night, Yugi is working on his puzzle, trying to figure out how to raise the money to pay Ushio. When he finishes it, he realises that a piece is missing.

However, his grandfather comes in with the final piece. As it turns out, Joey stopped by after getting the final piece from the water he threw it in. Yugi finishes the puzzle, when a strange light emanates from it…

When Yugi went to school the next day, Ushio was rolling around in the leaves, ranting about money.

Unknown to him, Yami Yugi had emerged the previous night and paid Ushio a visit, beating him. He then inflicted a punishment game on Ushio, making him think that the leaves and garbage around him were money.

Yugi also found that he had two new friends, his former tormenters Joey and Tristan.

Later, Yugi discovered Duel Monsters. His grandfather had showed Yugi and his friends his rarest card: the blue-eyed white dragon.

Unfortunately there was another visitor, boy millionaire and Duel Monsters champion Seto Kaiba. He wanted the blue eyed white dragon for himself. But Yugi’s grandfather woudn’t sell due to its sentimental value.

Later, Kaiba had Solomon kidnapped and brought to Kaiba Corp for a duel in Kaiba’s holographic arena. Kaiba won, and tore up the card so it could never be used against him. There were only four in existence, and he already had the other three.

Enraged, Yugi called upon his dark side to do battle with Kaiba. In the end, Yugi won by summoning the all-powerful Exodia, and wiping out Kaiba’s monsters. 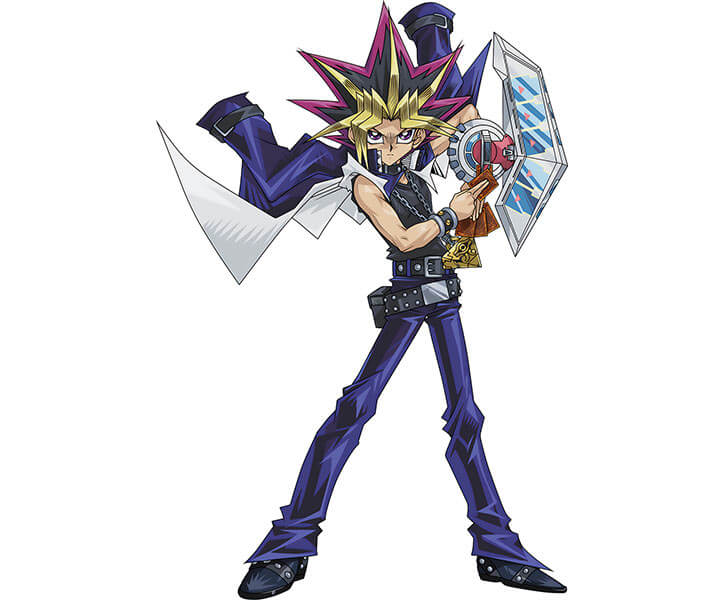 This battle drew the attention of Maximillion Pegasus, the industrialist who created Duel Monsters. He too owned a Millenium artefact, the Millenium Eye, which allowed him to read minds.

With the help of his friend and Yami, Yugi traveled to the duelist kingdom and defeated Pegasus. Pegasus’ Millenium Eye was then claimed by Bakura, one of Yugi’s friends.

Bakura also held the Millenium Ring. It could detect other Millenium items, and housed the spirit of a soul-stealing grave robber.

A cadre of thieves, the Rare Hunters came in under the leadership of the mysterious Marik. They were after the God cards: three all-powerful monsters who held the key to ultimate power.

The Rare Hunters already had two of the cards. Isis gave the third, Obelisk, to Kaiba. She told him to hold a tournament to lure in the Rare Hunters and get the others. Greedy for the cards and to reclaim his title as world champion of duel monsters, Kaiba announced the Battle City tournament.

Yugi entered the tournament in order to help his other self regain his memories. This could only be done by getting all three-god cards. Yugi defeated Marik and his forces one by one, even joining up with Kaiba at one point. In the end, he defeated both Kaiba and Marik, and claimed the god cards. 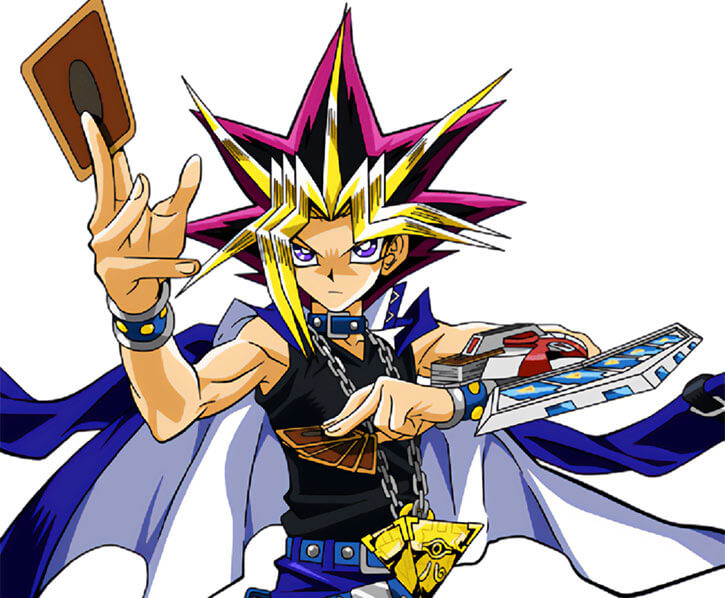 Yugi is a small, sheepish boy, easily identified by his curious spiky hairstyle. He almost always wears his Millenium Puzzle on a rope or chain around his neck, and never removes it.

When in school Yugi wears a blue uniform. During Duel Monsters tournaments Yugi dresses in leather outfits: jackets, collars, and the like.

When he changes into Yami, he looks pretty much the same, only his eyes become crazed and sinister, and he has an outline of an eye on his forehead. Later in the manga, Yami Yugi changes to look like an older, more mature version of Yugi.

Yugi is a kind gentle soul who likes playing games. He is very loyal to his friends and not afraid to stand up to people much larger and more dangerous than he is.

Yami is a different story, he is cold and ruthless, though he does care for Yugi and his friends, he believes in the ancient “eye for an eye” law, and will not hesitate to inflict cruel consequences on those who threaten him and his friends.

“Ho Ho… I think that thug, Ushio, might be the one getting in trouble…”