This is the second half for this article.

So make sure you’ve read the first half first !

Amiko was kidnapped again, this time by a pirate lord.

Yet another kidnapping of Amiko to get at Wolverine resulted in Yukio facing Lady Deathstrike (Oyama Yuriko) and Omega Red (Arkady Rossovich). Outmatched, Yukio was crippled by Deathstrike, who carved a kidnapping note into her back.

Yukio requested that Wolverine kill her if it turned out that she would never walk again. But within a year, she made a miraculous full recovery.

However, it would seem that she and Logan broke up during that time.

In 2004, Storm came to Japan to investigate a ring of mutant pit fighters.

As the Wild One suspected it was all a trap. The former Morlock called Masque was in control – and nearly broke Storm. Masque brainwashed Storm and wanted her to kill Yukio as a test, but Munroe once again proved indomitable.

The secret of Mana

By 2005, Amiko looked about 14 or 15, and in a mysterious-and-aloof-to-get-attention phase. As to Yukio, she stole an invaluable necklace from a heavily guarded Japanese temple.

When this jewel, the Mark of Mana, telepathically contacted her she got spooked. She asked Wolverine for advice. A conflict with warrior monks serving the evil sorceress Ashurado ensued.

Wolverine took point, as Yukio had to hide Amiko from the monks. But their enemies used magical scrying to capture the pair.

They were transported to the Bridge of Six Realms, a mystical locusA site with notable properties dimension. A war between two mystical orders was about to take place there.

However, Logan tricked and destroyed the demons guarding Yukio and Amiko.

Amiko then picked up the Sword of Blood. This is the sacred blade of the Shosei sect, who had fought along with Wolverine against Ashurado and the demons.

After Amiko-chan told Yukio and Wolverine that the sword was speaking in her mind, the last Shosei priestess determined that Amiko’s biological mother had been a member of the Shosei.

Amiko volunteered to become the miko (shrine maiden)  of the Shosei priestess. This was to honour both her biological mother and her adoptive parents.

(This story was written by “Akira Yoshida”. Who actually was C.B. Cebulski in yellowface.)

In 2010, Wolverine asked Yukio to protect Tsurayaba Matsuo. Logan had been torturing Tsurayaba for years as revenge for Mariko’s death.

But Tsurayaba had manipulated Psylocke (Elizabeth Braddock) and Djinn (Fahd Alireza) into attempting to kill him to put an end to his suffering.

Yukio ended up facing Braddock. Despite her dogged attempts Psylocke overcame her. But the Wild One had slowed her down enough for Wolverine to reach the scene and confront Braddock and Alireza.

A few months later, a demonically-possessed Logan was sent by an organisation called the Red Right Hand to attack Yukio and Amiko.

The pair couldn’t hurt the demonic Wolverine (or “Hellverine”, if you must), who gutted Yukio. They narrowly escaped atop a commuter train.

However, the demon within Wolverine had accomplished his objective – severing Yukio’s spine to break her. Presumably, Amiko got the Wild One to a hospital in time to save her life, but her mother was now crippled.

Yukio craves enjoying life to the fullest, and is an adrenaline junkie.

She routinely puts herself in deadly situations, trolls for fights, and enjoys pastimes such as high-end hard liquor, sex with dangerous men, extreme stunts and hardcore partying.

The Quotes section in this entry presents her view of life.

However, she isn’t just a nutbar. Though she lives outside of society, she has her own moral code. She is hard, cynical and a killer – but not evil. For instance she will never agree to hurt children or teenagers.

She also has occasional flashes of common sense.

The Wild One seldom forms close personal bond. But when she does these are very strong. Such as her love for Wolverine or her friendship with Storm.

On the other hand, she can’t stand Gambit (Remy Lebeau).

Traditionally, whether Yukio and Wolverine are lovers is left unsaid. The History section in this entry traces our best guesses.

One gets the impression that their relationship always was hard to define. But that was never explored. It’s not until 2010 there’s a statement they had sex during most of Wolverine’s stays in Japan.

Amiko’s presence changed Yukio’s lifestyle. The Wild One remained a punk mercenary, a reckless party girl and a troublemaker. But she also became a mother and had to provide some level of stability and responsibility.

The main impact was to have Yukio forego the quasi-suicidal vibe she had during the 1980s and 1990s. Over the 2000s, the Wild One even acted sensible about what Amiko was allowed to do.

Rider on the Storm ?

A fair few X-Men fans formed the impression that Storm and Yukio were lovers.

There isn’t, to my knowledge, solid elements to back that interpretation. But it’s not silly either. And back then, such a relationship would have had to be signalled in an abstruse manner. Like with the cryptic allusions about Mystique and Destiny.

The main two springboards for this take are : 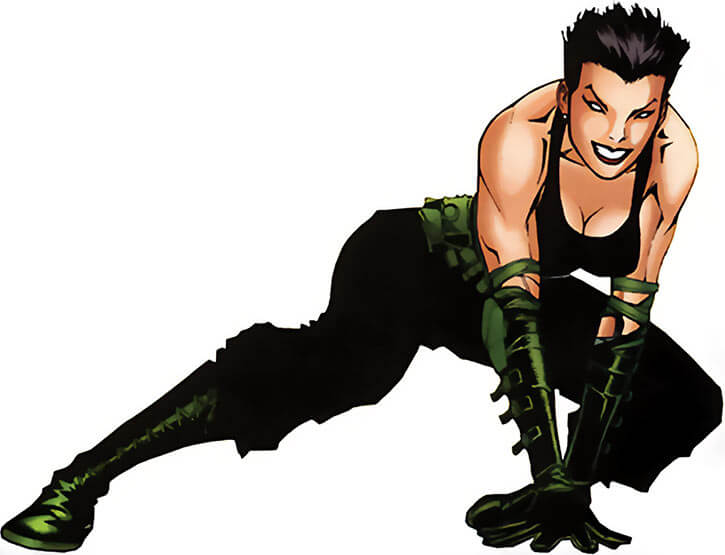 DC’s Japan has historically been underpopulated. Having Yukio around wouldn’t change much.

Being the foster mum of the big bad 1980s/1990s man’s adoptive daughter being a significant aspect of the character, she could have a similar relationship with Deathstroke the Terminator.

Yukio would secretly be a former member of the League of Assassins.

“I’m a tigress, Logan. But if you think me skilled in the arts of war… wait ’til you see me perform those of love.”

Wolverine: “Are you flamin’ crazy, woman – playin’ chicken with a 200-mile-per-hour bullet train ? D’you want to die ?!”
Yukio: “Does it matter ? I will eventually. So will you. But until then, Logan, I want to live every moment to the fullest ! And when I die — I wish to die spectacularly !”

“We are two of a kind, soul-mates — born rebels, Logan, who make our own rules in a society where we have no place. And which has no true place for us. I love you Logan-chan – kill me, and kill yourself.”

“Life is the ultimate adventure, wind-rider, and death the prize that awaits us all. Since it’s inevitable, why worry about it ?”

Yukio: “Hello. I am called Yukio, and any friend of Wolverine is a friend of mine.”
Jubilee: “…” (beat) “How come he doesn’t know any plain girls with frumpy tastes in clothes —?”

“Let them run for their boring little lives — you and I get to do the fun stuff.”

“You pour me some drinks, Logan-san, and we’ll sing a few songs and tell lies about all the good times we had !”

“I am not your blood mother, Amiko, but you, Logan and I are related in a way few families are. In our lives, we’ve each had to face a life and death question. And now it’s your turn. I need your help, Amiko. So what will it be – victim or victor ?”

(To a pensive Storm) “Earth to goddess. Anybody home ?”

“Logan, Amiko’s a teenager. You should be happy she’s already outgrown that whole rebellious phase she was going through.” (beat, mutters to herself) “God knows where she picked that up.” 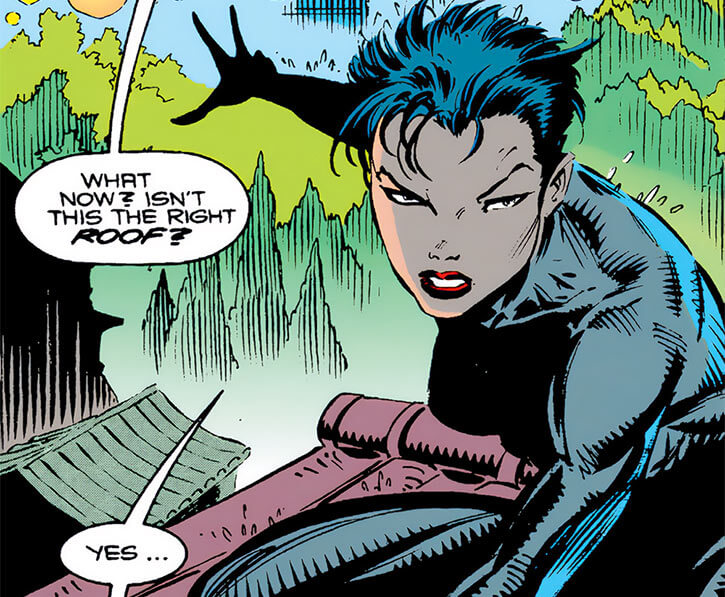 SIA toward Thrill, Dependent (Amiko), MIA toward Wolverine, Eclipsed (this Drawback triggers whenever somebody is trying to kidnap her and/or Amiko as part of a plot against Wolverine).

I have two extra illustrations left, since apparently I can’t count. 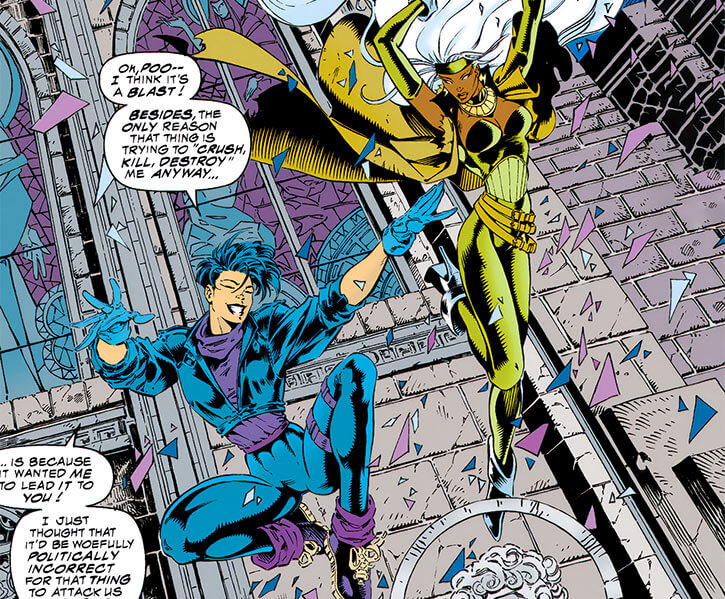