Zairobs is an expert, unpredictable hand-to-hand combatant and fighter. When he’s fighting or angry, his body breaks out in a glowing pattern of mystic and pseudo-mystic symbols that have eerie effects on all witnesses (Aura of fear).

B.A.D. (Brotherhood of Amoral Dudes) is a small-scale operation of drinking buddies with super-powers, that specializes in orchestrated robberies and auto thefts and invests its money in the drugs trade.

Jake Gummins himself was an apprentice spy that was kidnapped by a hostile foreign power and used as a test subject for a hallucinogenic chemical weapon. It KOed him for several hours, blasted his sanity to smithereens, and gave him a talent for combat.

After several years as a psychiatric patient (where he greatly refined his natural fighting ability), he acquired his psychoactive stigmata as a delayed result of the test weapon, and fled.

Jake now teaches self-defense in local high schools, but he also serves as muscle for his friends at B.A.D.

Zairobs is a real loon, prone to doing bizarre and inappropriate things during an attack. He currently believes himself to be a space hero, like Buck Rogers, and wears an oversized set of Buck Rogers pajamas as a costume. His helm is a pretzel can with a spring-loaded visor cut into it (the whole thing can be quickly torn away when Zairobs needs his stigmata).

He will taunt his opponents in a cartoony voice and behave as though he’s saving the universe from their treachery. This mania should occupy him for two or three months before he switches. 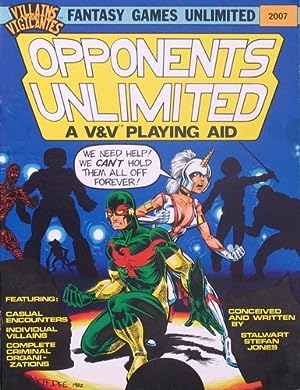