This profile is part of our second series of Street Fighters profiles. These entries are more oriented toward the narrative, background and general feel of the characters. In constrast, Sean’s older writeups focused on Super Power Reserve and other alternate mechanics to reflect the gameplay.

Zangief is probably the best wrestler in the entire Street Fighter universe.

His natural bulk and strength allow him to go toe to toe with actual grizzly bears and even defeat them. He’s capable of shrugging off blows that would seriously injure most people. He’s strong enough to pick up and pile-drive 1500 pound bears.

In fact, he’s so strong that he can easily injure opponents that aren’t world class fighters. Therefore, Zangief usually only fights other world warriors.

Zangief has often been depicted in noncanon appearances (primarily animé ) as having severe learning disabilities. Yet he’s not the dullard many believe him to be.

It’s true that he stole the Spinning Lariat move from Haggar, and his signature move the Spinning Pile Drive was discovered by complete accident. But he was able to develop the Banishing Flats to help counter his weakness to projectile attacks.

As a wrestler with superior strength his main strategy is to get up close and personal with his opponents. He’ll then grapple them for maximum damage. Wise opponents tend to use projectiles or acrobatic hit-and-run tactics to keep Zangief at bay.

He’s also accustomed to wrestling in the subzero temperatures of Siberia wearing only a pair of speedos. And yes, he’s prone to drinking large amounts of vodka even before matches. In DC Heroes RPG terms these mean Cold Immunity and Systemic Antidote (alcohol only) respectively.

Zangief was the strongest man in all of Russia. He was so strong that he once accidentally snapped an opponent’s spine during a match. This coupled with the fact that he had seriously injured countless other opponents and wrecked many training rooms forced him to train by himself. Zangief practiced in Siberia by wrestling grizzly bears. This of course only made him stronger.

While training a sudden squall picked him and his grizzly bear opponent up. It twisted them around in the air and slammed them head first to the ground. After recovering Zangief roared with joy. He had just discovered his new signature move – the Spinning Pile Driver.

The premier of Russia asked the Red Cyclone to travel around the world to demonstrated his might. Ever the proud patriot, Zangief gladly accepted. 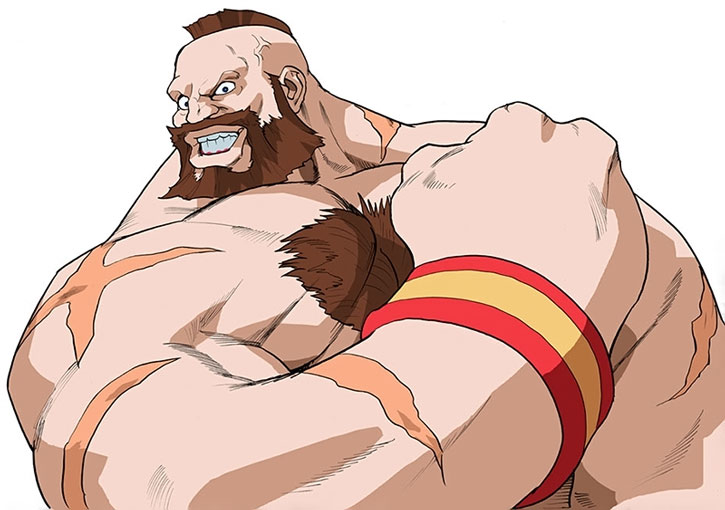 Zangief first encountered Birdie. After trading insults the two did battle. It is unclear who won, but it would seem that Zangief prevailed.

After that Zangief encountered Ken. The Red Cyclone intensely disliked Ken. He was a wealthy and flashy America who had the audacity to wear red – deemed by Zangief a Soviet color. Ken bested Zangief and the wrestler seemed bitter about this judging from later quotes.

Later on Gorbachev congradulated Zangief on showing the world the strength of Russia. Which matches were won wasn’t specified.

Shadaloo activities had begun to encroach into the Soviet Union and cause unrest. Zangief was once again dispatched by Gorbachev to defend the Union, this time by dismantling the criminal organization.

Along the way he fought matches against E. Honda and R. Mika. It’s unclear who won in his match against Honda – probably Zangief. He clearly beat Mika, but was impressed by her tenacity. After this bout she became his number one fan.

On his way to the Shadaloo HQ to destroy the Psycho Drive he was beaten by Blanka. Other world warriors managed to destroy it anyway, and Zangief shielded R. Mika from the explosion. Since the Psycho Drive was destroyed and the threat of Shadaloo temporarily halted Zangief returned to his country a hero.

Zangief was once again dispatched by Gorbachev to prove to the world the strength of Russia. He was once again beaten by Ken, but he did well enough in the match to attract the attention of a prominent wrestling promoter. 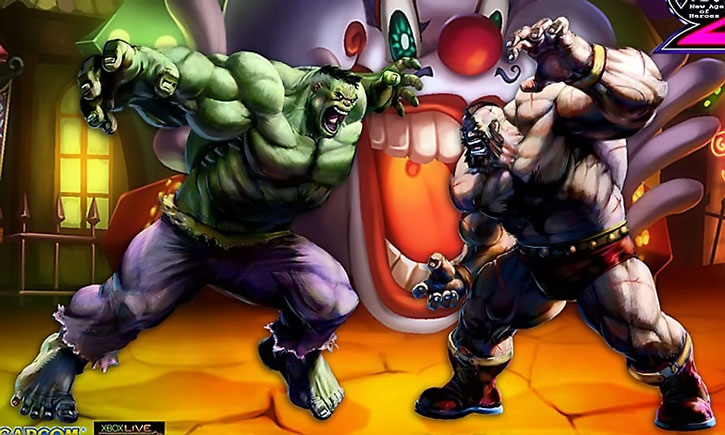 Zangief originally turned down the offer as he wasn’t interested in filthy capitalist money, only to prove the strength of his country. But he reconsidered once he realized that the matches would be viewed by millions of people.

He once again returned to his country a hero and enjoyed drinks and dancing with Gorbachev.

He enters the tournament:

That’s about it – his actions don’t really have much of an impact on the SFIV storyline.

Zangief is still wrestling in New York. He then travels to England where he is reunited with Rainbow Mika. The two decide to go on a training journey. 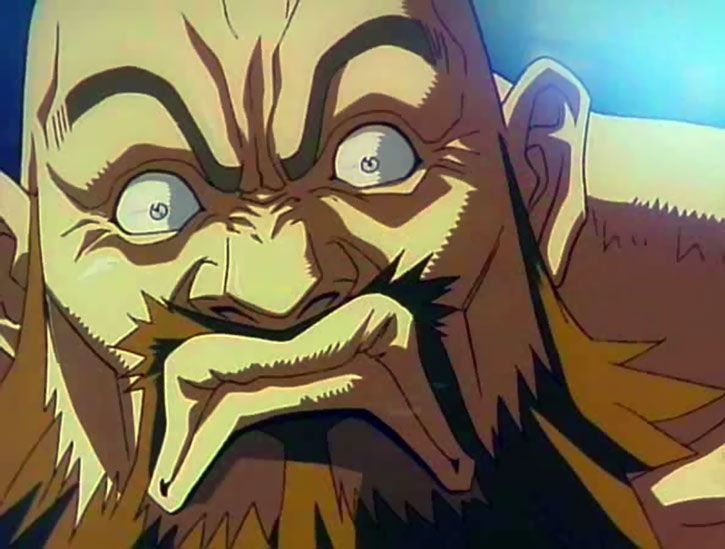 Their next stop is China where they meet Rashid, another fighter. Rashid turns out to be a fan of Zangief’s. Thus, he is very impressed when he shows off some of his moves. Zangief than states that Mika and Rashid should spar. Rashid prevails and Mika vows to train harder so that she can eventually beat him.

They then travel back to New York for a tag team match with Vega and one of the 12 dolls. The camera cuts out before the match concludes, so the outcome is left unknown.

Zangief is a gigantic seven foot tall behemoth. He sports a lot of body scars from wrestling grizzly bears, a Mohawk and much body hair.

His trade mark costume is red Speedos and matching red wrestling boots. A lot of the arts depicts him in goofy poses that show off his insane physique. He often sports a goofy kind of “I’m trying too hard to perform a feat of strength” expression on his face.

Zangief is first and foremost a proud patriot of the late Soviet Union. He simply wants to show the world the power of Russia through his massive physique and wrestling moves and he wants a good clean fair fight to prove it. That said he isn’t overzealously blinded by it – nor is he xenophobic.

He particularly dislikes Ken Masters. But again he isn’t blinded by hatred. He just thinks that Ken needs a good solid thrashing in the ring.

Despite his image as a fearless warrior who wrestles grizzly bears, Zangief is an outgoing friendly guy. He also respects other worthy wrestlers such as Edmond Honda and Rainbow Mika. He is particularly kind to children and does appreciate the fan support he gets.

He’s also super proud of his physique. Thus, will often chide opponents for not being as buff as he is. 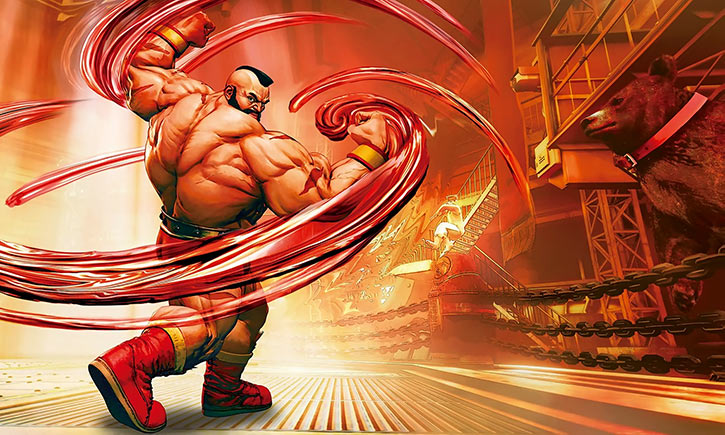 He practically worships the whole muscle power thing that he’s got going on. This is despite being bested by several opponents that aren’t quite as buff as he is. It makes one wonder if he truly believes this or if it’s just kind of a coping mechanism.

He also has a strong rivalry with Mike Haggar (even though they’ve never met). But in all fairness Zangief stole Haggar’s Spinning Lariat first. This is due to the fact that he’s one of the best American wrestlers and that Haggar copied his Spinning Pile Driver move (and again also polictics).

Of the representation of gay men in older console games

Zangief was eventually established as being gay. This was conveyed through a number of quotes, such as his “I don’t like fireballs, but I like you” to Ken Masters.

In real-world terms, there’s also the issue of the violent repression against LGBT Russians. Given Zangief’s preferences, either the Russia of Street Fighters is much less reactionary about homosexuality… or everybody is pretending very very hard that the greatest Russian strongman and shoot wrestler is totally not gay.

Another remark is that Zangief likely received this bit of character development since he looks like a common caricature of gay men in Japanese pop culture. Namely, he’s big beefy guy with a moustache and revealing clothing. The use of this cartoonish cliché for one of the few LGBTQ characters in classic brawling video games isn’t… optimal.

“My strength is much greater than yours.”

“Next time we meet, I’m gonna break your arms !”

“Nothing can escape my furious swirling death mov  !”

“At least you can still walk ! Consider yourself lucky !”

“Viscera ! Bone ! Flesh ! My body of steel knows no weaknesses !”

“If you had a stronger body, you might not have been paralyzed !”

“I’ll dedicate this fight to the people of Russia !”

“I’m like a cyclone… If you get too close you’ll be sucked in !”

“Strengthen those triceps ! It is not too late to build your body !”

Drawbacks:
Minor Rage, Creepy Appearance (Size, and scars all over his body).

Zangief, like all the other Street Fighter characters, was massively powered up to be able to compete with Marvel’s heavy hitters in the crossover series:

Drawbacks:
Minor Rage, Creepy Appearance (Size, and scars all over his body).

Grin and bear it

In the crossover series he also had the ability to change into an Alter Which granted him quite a bit extra raw power and Ego – Mecha Zangief ! Switching to his some other interesting abilities at the cost of speed. Alter Ego takes a full round in which he may take no other action and (same with switching back) costs 15 HP.

I had a bit of fun adding a few minor powers (cold immunity and systemic antidote), that thematically fit his concept and a few abilities that he might logically have, but are not explicitly shown in the game. The Skills listed are also will make the wu more useful and enjoyable, but are of course somewhat speculative. 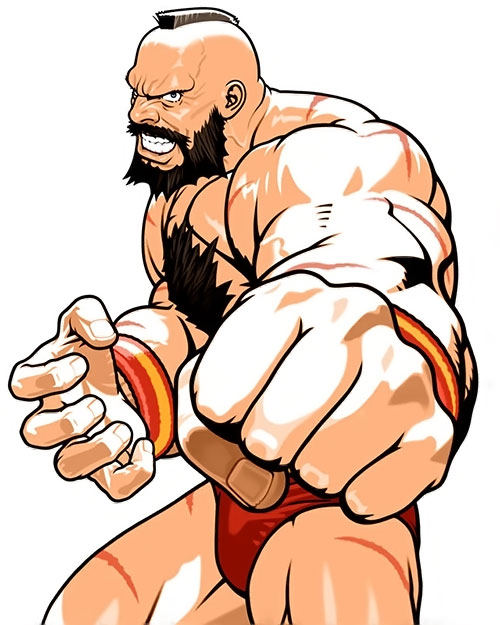 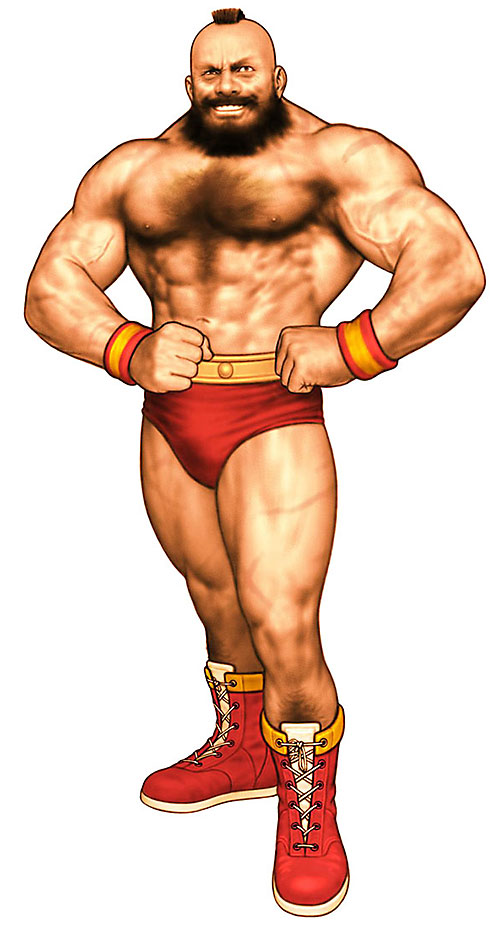