This profile is about the Golden Age  character. A version of her is known to have existed on New Earth and we’ll discuss that, but little is known about this one.

Zara is a clever cult leader. She has enough understanding of science and technology (chiefly chemistry) to engineer some spooky SFX to intimidate the faithful.

She also has standard equestrian and martial skills for a pulp-ish desert dweller. Plus a keen (but apparently self-taught and based on personal observations) understanding of psychology.

Zara’s operations and lairs are full of illusionary tricks and SFX. These range from chemical effects to simple mirrors and discreet piping conducting voice. Even their HQ was a desert mirage created with sun reflectors. The real HQ was hidden some distance away.

Zara is presented as “an Arab”. Since her English has a strong French accent, I would assume that she was actually Syrian or perhaps Lebanese. Howbeit, faux-French accents were also often used to simply indicate that a character was a foreigner.

Her father sold her into slavery. Thus, Zara swore she would gain vengeance against him and against all other men of power.

The tale of how she escaped from her condition as a slave is untold. But she built up a religion that would spread widely in the late 1930s and early 1940s – the Cult of the Crimson Flame.

The Cult featured spectacular apparitions. The Crimson Flame would manifest to worshippers and enemies alike as an actual crimson flame floating in the air. It would then disappear without a trace.

Voices would be heard, and written messages often appear then disappear in presence of the flame. More often than not, these were written on the arms of the faithfuls or opponents. Sometimes, a face would even appear in the flame.

It was said that the enemies of the Crimson Flame were mysteriously stricken sick if they persisted.

With such phenomena at its disposal, the Cult swept through the Middle East and soon reached America, and possibly Europe.

It was all a trick. 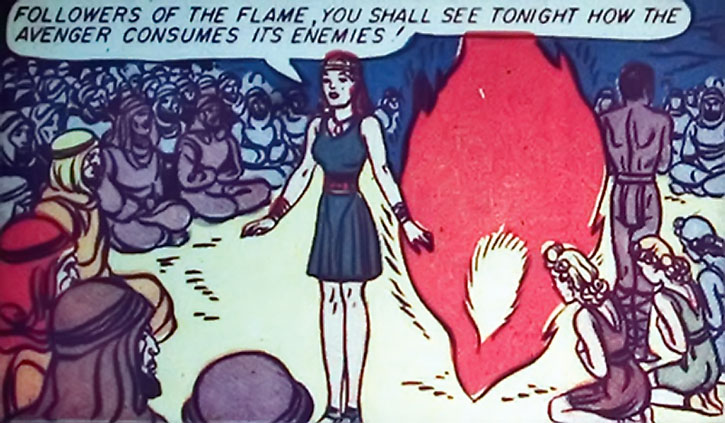 Much of this trickery was made possible by a very devoted following of young women from the same country as Zara. These would infiltrate key places and put the various tricks in place, kidnap people, etc.

Those assistant priestesses were usually competent, disciplined amateur spies. Though the Cult was not generally murderous, they also armed themselves with burning blades, and held some prisoners with burning chains. Both were also done using liquid nitrogen.

US Army Intelligence, and thus Diana Prince and Steve Trevor, ran into the cult when Helene Armstrong, a senator’s daughter, joined the Crimson Flame Cult’s ranks. Mr. Armstrong laughed at the cult, and soon fell ill.

Fearing for his life, he influenced Army Intelligence to stop any investigation of the Crimson Flame. But as his cardiac troubles worsened his daughter came to see Trevor, and investigations resumed.

Armstrong’s nurse was a Cult agent. The Cult also started intimidating Trevor and Prince thanks to a new office girl sent by Zara, who planted Crimson Flame devices in their offices. However, they mistakenly captured Prince instead of Trevor.

As Wonder Woman, she escaped, but failed to retrieve Helene Armstrong. Soon, Wonder Woman and Steve Trevor, plus a contingent of Holiday Girls, were headed for the Middle East to investigate the Cult’s main city and temple.

Sanctum of the Crimson Flame

The Cult ambushed the newcomers. But thanks to Wonder Woman’s ability to lead women, they were repulsed despite being better-armed and more numerous.

Zara had her enemies surrounded by the Crimson Flame itself in the desert. But Wonder Woman smothered the nitrogenous flames and caught her. However, the high priestess threatened to roast the Holiday Girls with more burning liquid nitrogen. This forced her opponents to surrender. 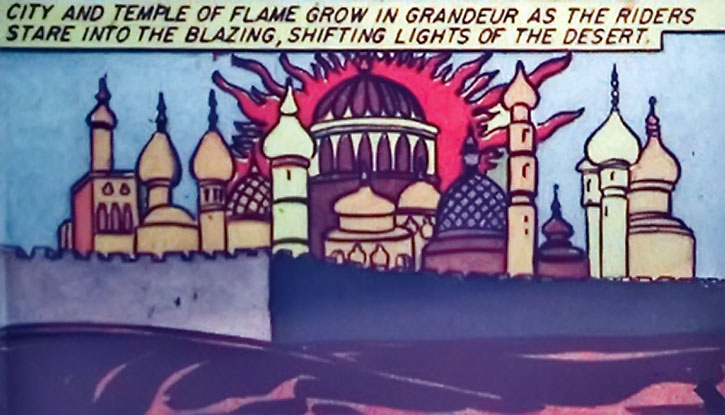 Soon after that, Trevor freed Wonder Woman. The Amazon then saved everyone and had Zara confess her life story.

The former High Priestess of the Crimson Flame was then deported to Paradise Island and more specifically Transformation Island.

Nearly five years later, in 1948, Zara was recruited by Eviless into Villainy, Inc.. Zara was one of the four women who escaped from the group’s defeat. In the aftermath, she allied with Hypnota the Great.

Zara then proceeded to resurrected the Cult with all its trappings and techniques. But this time she had the backing of genuine paranormal powers thanks to Hypnota. The Cult rebuilt itself quickly, likely by attracting former members who still believed. 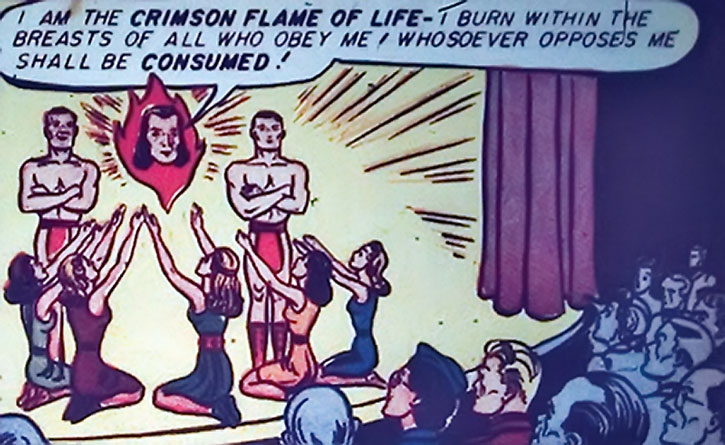 Zara even established herself in an underground base, which had presumably been built when the Cult first came to the US. Wonder Woman discovered it, but was captured thanks to the combined abilities of Zara and Hypnota. The Amazon was freed by Etta Candy and easily captured the two Villainy Incorporated members and their henchfolks.

Zara was also a member of the post-Crisis 1948 Villainy, Inc., as explained in the team’s profile. Her ultimate fate is unrevealed.

Righteous revenge was apparently her sincere aim. Yet she appeared to be quite interested in the trappings of power she was accumulating (authority, subservient cult members, handsome musclebound male companions, wealth, etc.) and was basically practising slavery herself.

In short, she had become what she hated, as usually happens.

“Here is zee girl Helene – she serves zee Crimson Flame of her own free will !”

(A message that appears on a blank sheet of paper under the Crimson Flame) “Beware the AVENGING FLAME ! You are interfering with occult forces you do not understand. Let Him Who Sees THE CRIMSON FLAME Fear Dire Danger !”

Connections:
As derived from Credentials.

Post-Crisis, the Zara seen in 1948 seems to be more powerful. She can actually shoot flames from her hands, though this chiefly seems to be a concussive attack – maybe Mental blast: 06. Wonder Woman I refers to this ability as “scientific trickery”. She also claims she will never be Zara’s slave again.

Her hair is now brown (though that may have been a colouring error), and she no longer has a French accent.

I would *assume* that the post-Crisis Zara of the Crimson Flame was an engineer with Stroke of Genius (Pyrotechnics), Scientist: 08 or so and Gadgetry: 06 or so. In this assumption she specialised in advanced (but not that powerful) technological tricks all giving the impression that she is wielding fire magic and consorts with fire spirits.

Demonstrating that her tricks are mere technology would be much more difficult, and the Cult would have been more influential and powerful than in the Pre-Crisis stories. Maybe she was the Ron Hubbard of the 1940s ! 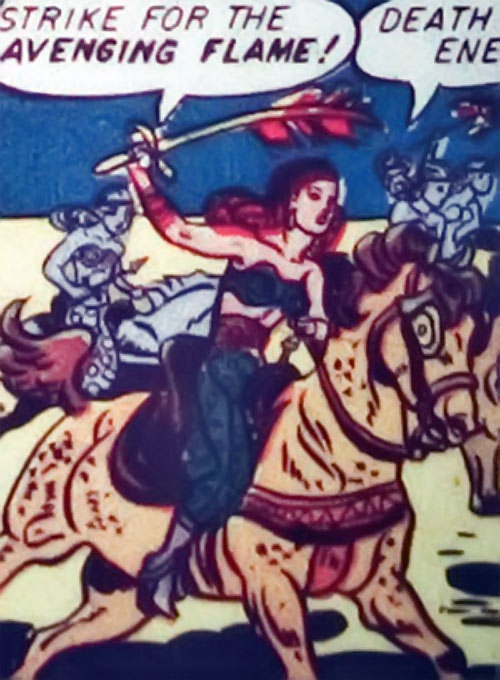 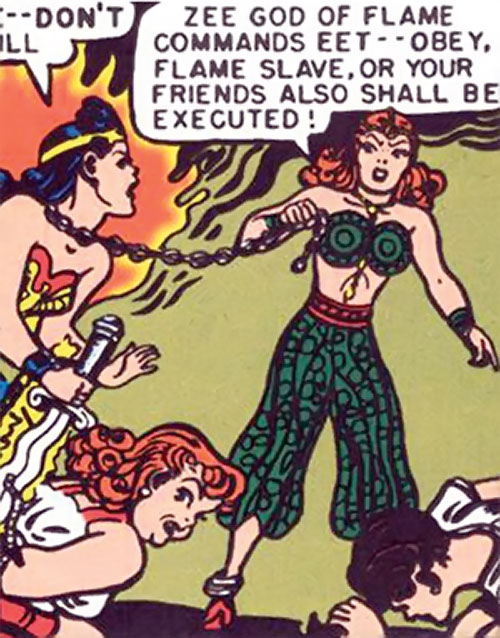 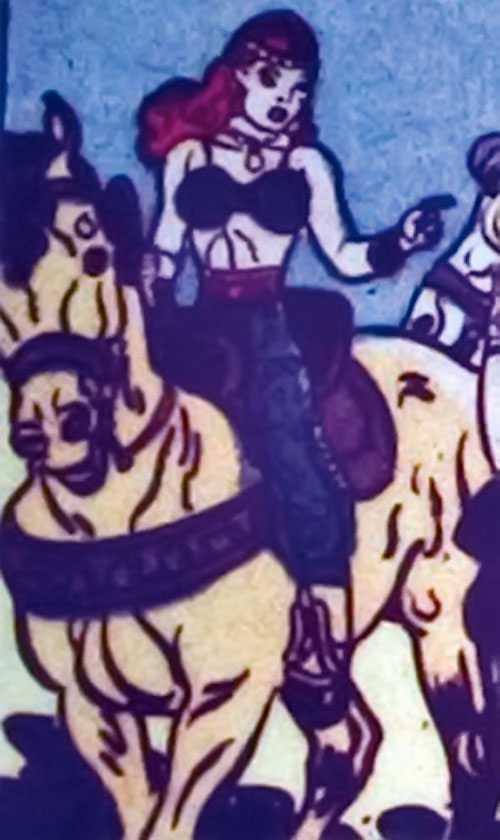 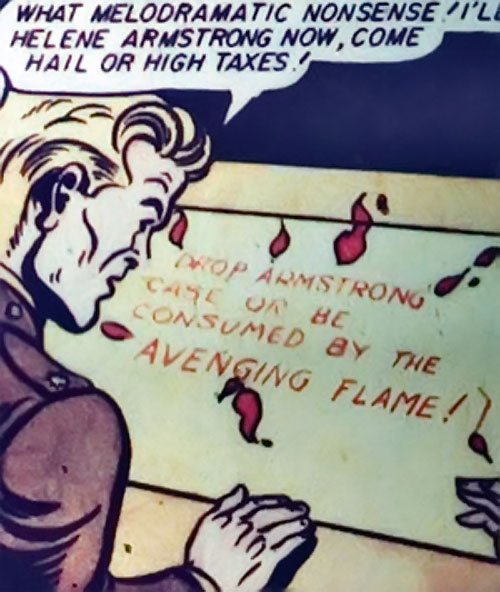