Pick a weapon. Any weapon. Zaran can use nearly every weapon in existence, except possibly for such specialized systems as the Iron Man suit. To quote the comics, he is “master of ancient and modern weapons including knives, bows, staves, maces, spears, nunchakus, suriken (sic), guns”.

He also knows a great number of forms, and while he’s not truly a “master” with any martial art, his versatility more than make up for this. While he could mow down people with an LMG , he prefers ancient weapons, which have more panache in his opinion.

His “basic arsenal” in the Equipment section below covers a great number of small sais, knives, derringers, shuriken, punch daggers, collapsible nunchaku… in his costume, and possibly a few weapons he could improvise from his surrounding. He’ll always have a few more weapons : combat knives, nagimaki, bow, spear (whose shaft is a blowgun), and so on.

Your basic, B-Movie, James Bond-like henchman. Zaran enjoys matching his skills against other weapon masters and martial artists, and is likely to overlook “lesser” opponents (such as women) to reach his “real opponent”.

Maximilian Zaran is a former MI6 action operative, who after experiencing a few problems with British justice opted to put his martial skills on the free market. He’s worked for a great variety of employers, and fought such masters as Shang Chi, Captain America and Hawkeye, which are generally recognized as being *the* best in their respective forms.

While he was never very well developed as a character IMHO, he’s from one of the best periods of Master of Kung Fu.

Later on, another man going by “Zaran the Weaponmaster” emerged.

Zaran should remain an independent merc, but should probably given strong ties with Cheschire’s outfit. His main adversary would become, of course, Arsenal.

Drawbacks:
MIA to challenges against other high-level fighters. 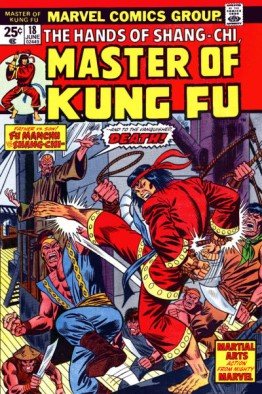