Through unknown means, Zartan can project realistic holographic images about his body. He uses this ability to mimic the appearance of other people. He can also use this ability to become “invisible” while remaining still.

Zartan is a skilled mercenary and assassin. He learned the art of war at St. Cyr , and the Arashikage style of ninjutsu from Storm Shadow’s family. While Zartan is competent with most weapons (from firearms to swords), he is a world class archer. Only Storm Shadow’s skill exceeds his own.

Outside of his physical prowess, Zartan has several “mundane” skills. He is fluent in over 20 languages, is a skilled ventriloquist and can throw his voice.

Zartan normally arms himself with a semi-automatic pistol. When expecting real trouble, he breaks out his long bow with its night enhancement sight.

Zartan was a experienced mercenary when Cobra Commander first hired him. The job was one that required Zartan’s unique skill set. Cobra Commander needed someone to infiltrate a clan of ninja assassins and kill one of them. The target was Snake Eyes.

Zartan used his gift of disguise to masquerade as a member of the clan. He spent months among them, learning their skills and gaining their trust.

Recognizing the opportunity, Zartan decided to frame Storm Shadow for Snake Eyes’ murder. He stole one of Storm Shadow’s arrows and acquired a sound amplifier from Cobra Commander. After that, he waited for the right opportunity to assassinate his target.

The time came while Snake Eyes and the Hard Master were practicing one night. Zartan used the sound amplifier to lock onto Snake Eyes heartbeat and shot him with the stolen arrow. With the kill shot taken, Zartan fled the ninja compound, leaving Storm Shadow to take the blame.

What Zartan didn’t realize was that due to a trick, he murdered the Hard Master instead of Snake Eyes. In that one second, he earned the hatred of Storm Shadow and Snake Eyes.

Following the failed assassination, Zartan assumed a colourful alter-ego and founded the Dreadnoks. The Dreadnoks were a mercenary group that worked out of the Florida Everglades. They worked on and off for Cobra Commander as thieves and saboteurs.

When Cobra Commander was being pursued by a team of Joes, he sought sanctuary in Zartan’s swamp lair. The Joes attacked him there, forcing Zartan to abandon his home. In retaliation, he decided to take the same thing away from the Joes. He started to search for the Joes’ secret base.

At one point, he came to believe that the base was under McGuire Air Force Base . He and his Dreadnoks laid waste to the base and all the equipment they found there.

Over time, Zartan’s relationship with Cobra Commander grew stronger. Eventually, he was tasked with providing security on Cobra Island. While there, he discovered that a single man had infiltrated the island. He grew anxious and set out immediately to confront the intruder. He feared that Storm Shadow had deduced that he murdered the Hard Master and had come seeking revenge. 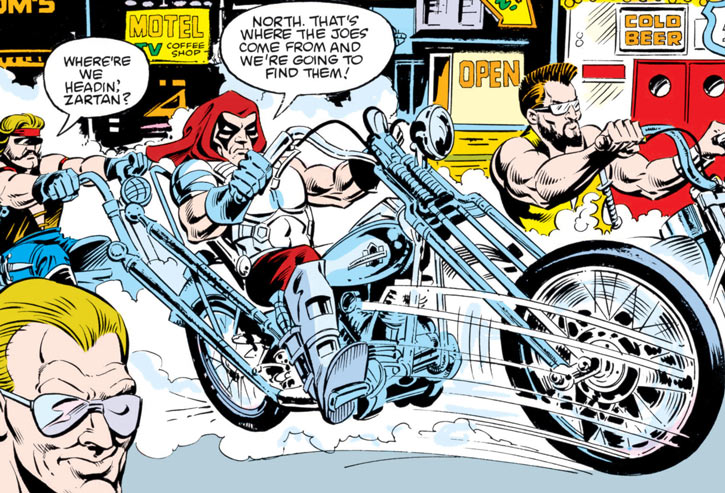 To his relief it was the Joe, Ripcord (who infiltrated the island for his own reasons). The two had a confrontation in the dark where Zartan subdued him. An idea struck Zartan after the fight had ended. He took Ripcord’s uniform and used his powers to disguise himself as the unconscious Joe.

When the Joes arrived to retrieve Ripcord, they took Zartan instead. Zartan feigned unconsciousness until he entered the G.I. Joe base. Once he found out where he was, Zartan attempted to escape. He almost escaped but a run-in with Sgt. Slaughter’s fist stopped him cold.

Zartan remained in the PIT for less than two days. His siblings (after getting the location of the PIT from Buzzer) infiltrated the PIT. Once there, they disguised themselves as two of the senior Joes and helped Zartan to escape.

Zartan is a non-descript Caucasian male. He is of middling height and has a lean muscular build. His natural hair colour is black, but his true eye colour has yet to be revealed.

Zartan’s costume is made up of a silver midriff bearing chestplate, brown pants and black boots and gloves. He covers his face with a black domino like mask and his hair with a brown cowl.

Zartan is a mercenary who’s loyalty is guaranteed, once he has been bought. He is ruthless and will often plot out his actions months in advance. His failed attempt on Snake Eyes life presumably took months to prepare.

That being said, he can be an impetuous and opportunistic man. He is fully capable of changing directions in mid-stride if a better opportunity presents itself.

GI Joe could be an extension of SHIELD or even the Super-Soldier program. It could be a mind shift or competing program in that if they can’t make a “Super-Soldier” through engineering the soldier himself. They could take the best of the best and give them the best training and equipment and create a sort of “Super Unit.”

“I can be anyone, anywhere. You will never know that you are talking to me unless I wish it.”

“Take the swamp cruiser and neutralize the intruders… and don’t bother to come back if you fail.”

“Nothing is more important than the safety of Cobra Commander !”

“Still some life in you, eh ? Nothing a few swift kicks won’t remedy !”

“My strength is quite… inhuman.”

Writeup completed on the 8th of November, 2016. 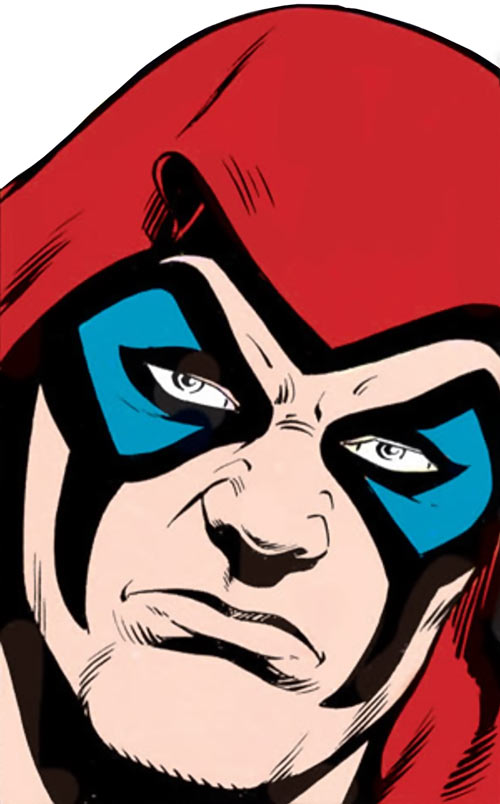 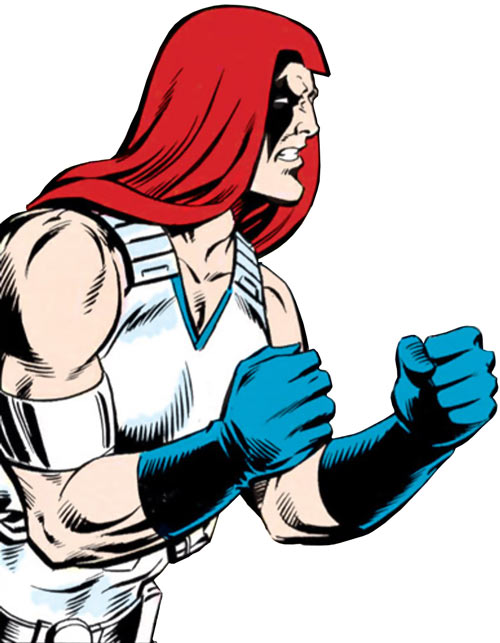 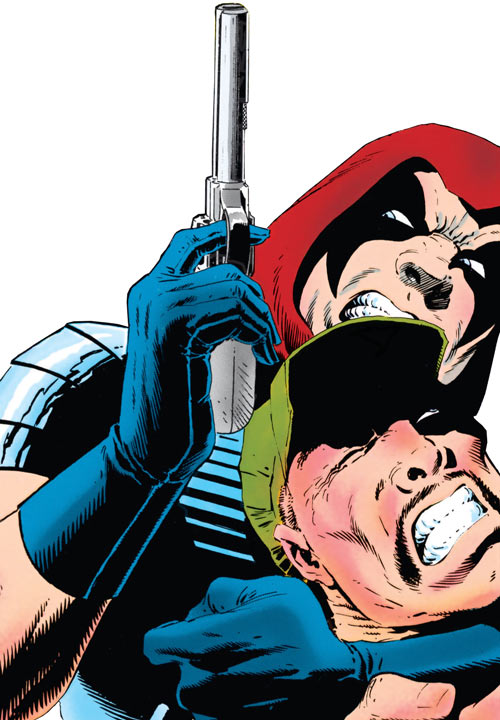 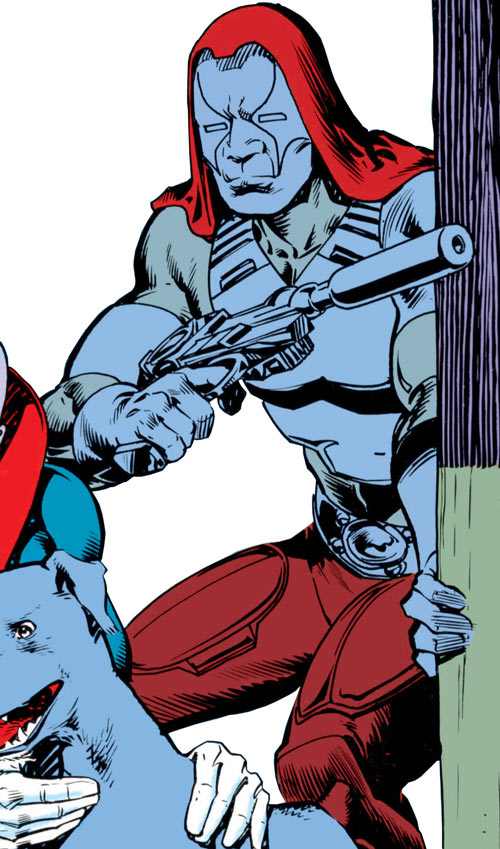 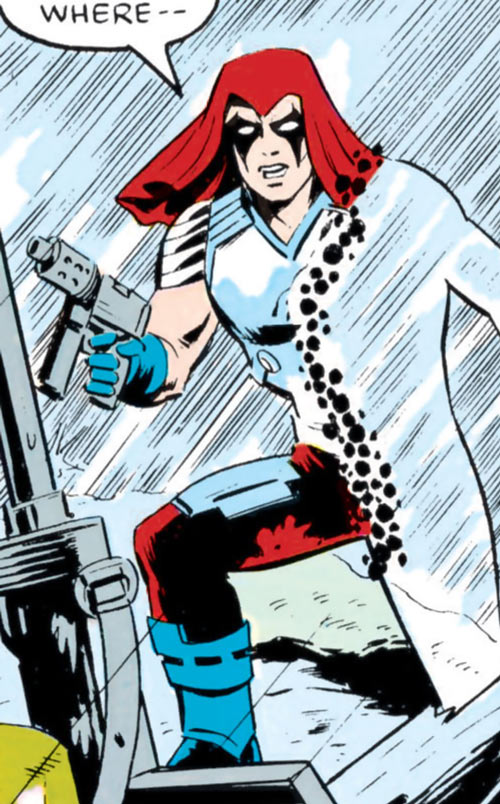